National Refugee Day is Tuesday, and this weekend, the Bruce Wood Dance Project will debut a work created to speak to the refugee experience. It’s called “Chasing Home” and the company received a $70,000 grant to make it from  TACA Donna Wilhelm Family New Works Fund to make it.

The big grant allowed the company to commission original music for the piece, from Joseph Thalken, a composer from New York. And it created an opportunity for Albert Drake. He’s a founding performer with the company, and lately, he’s also choreographing. “Chasing Home” will be his second major piece for Bruce Wood. I spoke with him about creating it.

You set out to make a dance that speaks to the refugee experience. Do you have a personal connection to the issue?

There’s a bit of a connection, not necessarily in a refugee experience, but more of an immigration experience. And that’s just coming from my own family. My mother’s side of the family are immigrants from Mexico. 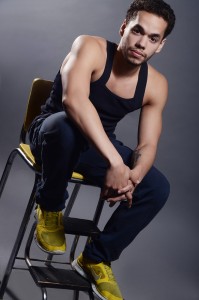 There is a difference between immigration and being a refugee. One is a little less of a choice. There’s less of a choice where to go and when to go. But that experience of leaving one’s home for potential. Trying to find a start where they wouldn’t elsewhere. Stories my mom would tell me of that kind of hardship, in terms of staying under radars.

And so, those are the type of things that I would hone in on and try to put myself in the shoes of. There’s only so far that can go. So that’s where other research came in.

What do you want your audience to take away from this dance?

If I can get them to just think about those people. The refugee, anybody who’s been displaced, anybody whose had their culture, their community, their livelihood, stripped away from them. Even if it’s just to think about it. Putting yourself in those shoes. If I can do just that, then that’s all I’m trying to do.

How did you start dancing?

I believe I was just about 16. That’s a little late. But I’ve kind of been around it. My older sister danced in middle school and high school. And she used to have to babysit me. And so I would always have to sit in on these rehearsals on the weekends, during the summer time.

When I got to high school, the dance director was my sisters dance director.  I was big into hip-hop, that’s where my love of dance and music came from. So one day, right after my sophomore year, she asked if I would teach hip-hop to her summer kids.

When we started that summer, I was just sitting watching classes. First ballet classes I ever watched. One day the ballet teacher, she came up to me with a bag, and I looked in it and it had dance belts, and leotards and tights and shoes. And she’s like, go put these on. Come take class.

Eight years later, here we are.

Bruce Wood, the company’s founder and choreographer, died in 2014. You were an original member of the company. You’ve got to be thinking about him as you head into this weekend and this big premiere.

Absolutely. My dad passed away a few years before he did. He kind of filled those shoes afterwards. I started dancing with his company right after my dad died.  So many things reminded me of my dad. Their being, their perspective, their work ethic, their ambitions. I kind of latched on to that type of mentorship.

So I think about him to this day.  And there’s a little bit of balance that I’m now searching: What would Bruce do? But also, I tell myself, don’t do what Bruce did. I don’t want to make myself a clone of. Now as I’m exploring myself as a choreographer, I am different from him.