Andrew Weber at NPR station KUT in Austin brings us this story of a group of Austin artists who all of their 2020 frustrations and channeled it last weekend into ‘Dumpster Fire,’ a dumpster-bashing audio-visual concert experience. 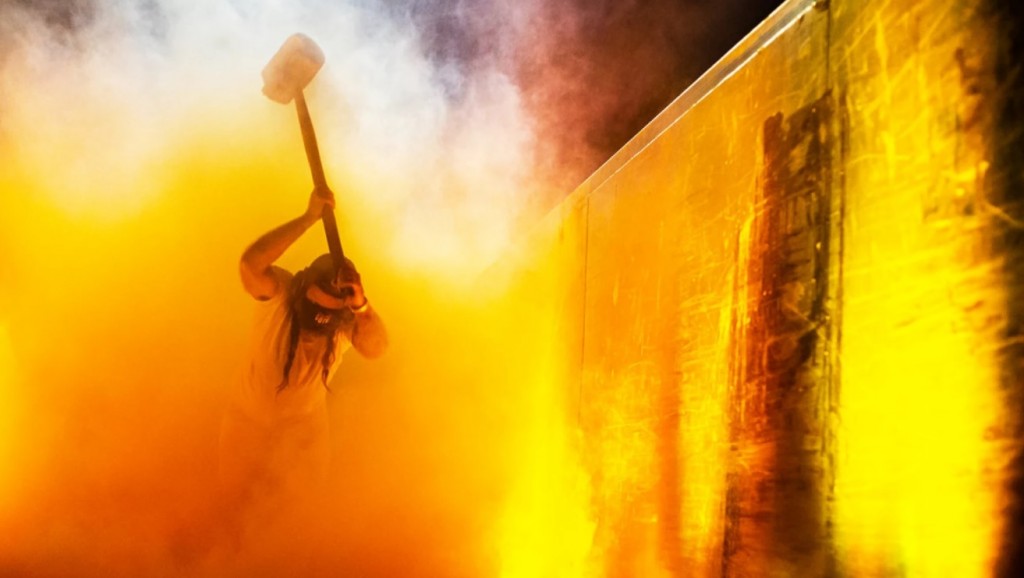 Percussionist Thor Harris wails away at a dumpster with a homemade hammer as part of Rolling Ryot’s “Dumpster Fire” concert on Saturday. Photo: Gabriel C. Pérez/KUT

A group of Austin artists harnessed this year’s unflinching instability and collective uncertainty to give audiences a cathartic distraction, using robots, hammers – and dumpsters.

The show “Dumpster Fire” – an apt descriptor of 2020 – finished its limited run last weekend at dadaLab in East Austin, but it’s a project the art collective Rolling Ryot has had in its back pocket for a minute.

Rolling Ryot is a nonprofit that specializes in immersive sound art. Founders Kyle Evans and Barna Kantor acquired the dadaLab space last summer. As they were renovating, they found an unlikely instrument. 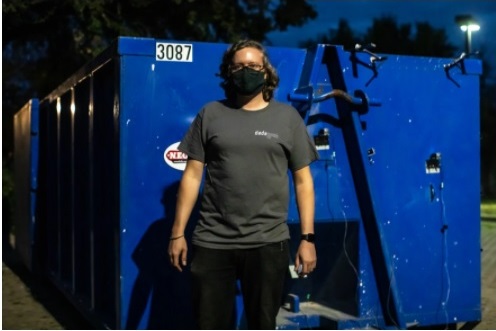 Kyle Evans runs dadaLab in East Austin and is a member of the Rolling Ryot nonprofit arts collective. He said they’d come up with the kernel for “Dumpster Fire” while renovating the dadaLab space last year. Photo: Gabriel C. Peréz

“Initially, we rented approximately 10 dumpsters during the construction of dadaLab. And as the newer and newer dumpsters arrived, we started to test them for their sonic qualities,” Kantor said. “And all of the sudden we are like, ‘Maybe there’s a show here. Maybe we can actually make them these giant drums.’”

The concept was simple at first: Get some percussionists, put them in a dumpster and see what happens. Then the pandemic hit and they had to shut down the space. After that, Evans says, they had a lot of time on their hands and nothing to lose.

“This year has been a literal dumpster fire. So it’s nice to show that metaphorically, but also it’s cathartic to bang on things really loudly and hear people bang on things,” he said. “I think there’s a lot of frustration, a lot of pent-up energy that people can just release, and so that’s why we’re doing it.”

Evans and Kantor rented two dumpsters, set them up in their back lot about 70 feet a part and enlisted a couple percussionists. One of them was Thor Harris, a longtime Austin musician who looks pretty much how you’d imagine a guy named Thor would look: braided long blonde hair, pretty muscular. And he’s got a giant hammer – actually multiple hammers he built for this project. 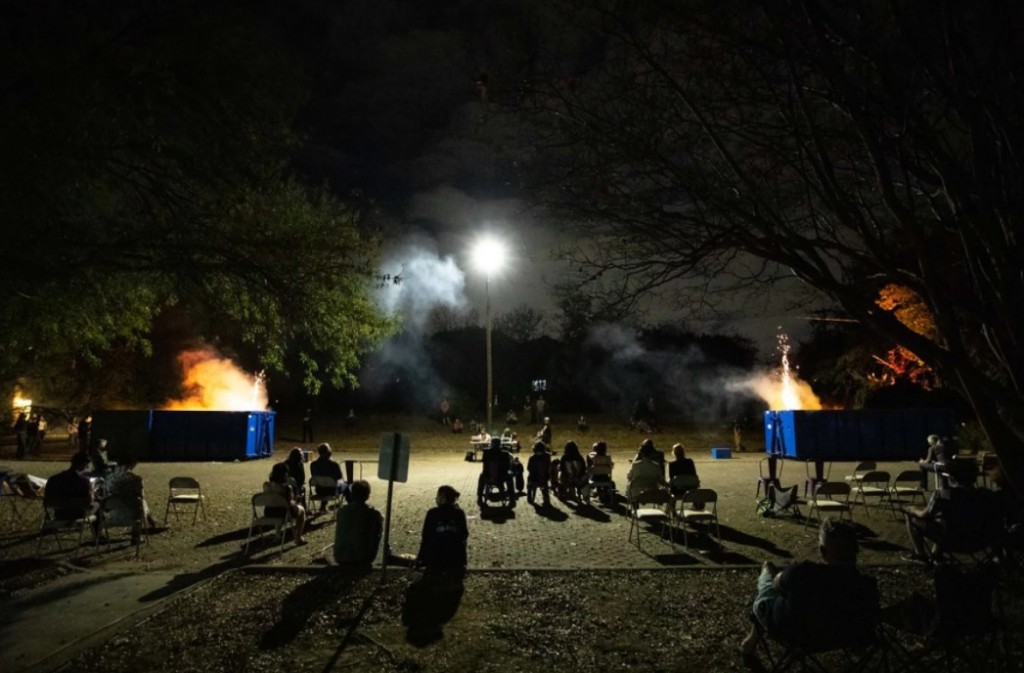 “I started building hammers specifically for dumpsters, you know, because you can’t hit them with drum sticks or vibraphone mallets or anything. And then they just got as big as we could lift them,” he said. “Some of them are about the size of croquet mallets, and others are like, you know, when you kill someone in a cartoon with a huge hammer? They’re that big. They’re cartoon gigantic.”

Just before Saturday’s show, he slinked into one of the dumpsters to test out a hammer of the cartoon-gigantic variety: 4 feet long with a massive tree-trunk mallet. The impact with the dumpster floor is punishingly concussive.

Harris has been a woodworker since he was a kid growing up in LaPorte on the Texas Coast. He’s a plumber, a carpenter and kind of an all-around craftsman. He builds admittedly weird instruments, like Freddy Krueger gloves – work gloves with lengths of bronze and copper pipe duct-taped to the fingers. 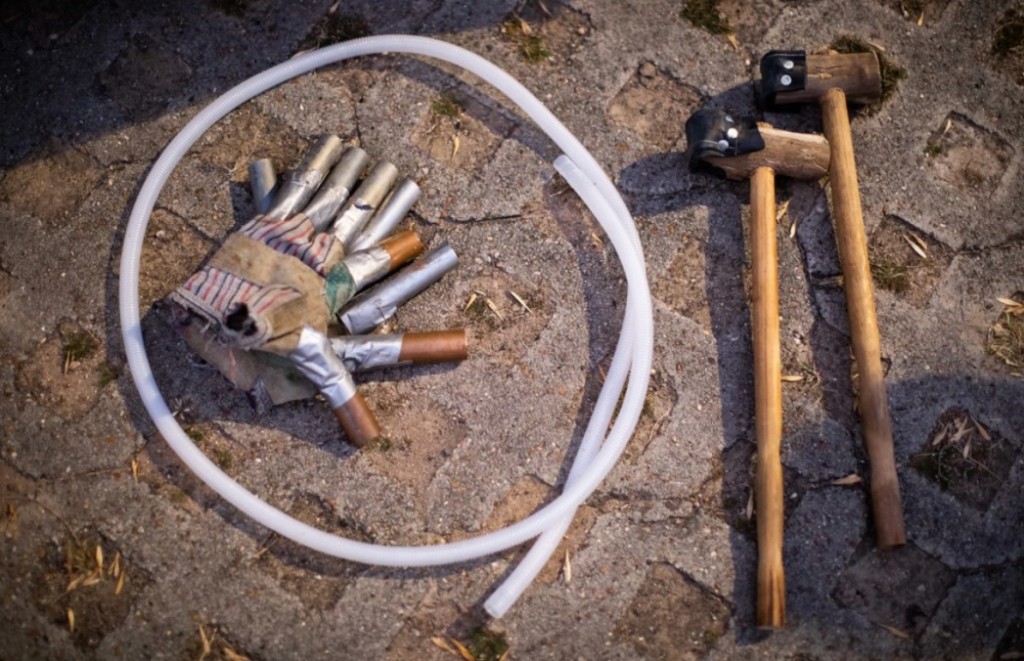 Some of Thor Harris’ creations used in the show include hammers and what he calls “Freddy Krueger gloves” – work gloves with lengths of pipe duct-taped to them.

On the other side of the lot, another longtime Austin musician is sizing up his dumpster, whacking away to find kick, snare and cymbal sounds.

“So yeah, Neil Peart [the drummer for Rush] could do some real stuff on this, because you have that many sounds,” Lyman Hardy joked. “You have an incredible range of sounds.”

But those aren’t the only instruments. There’s also an array of four little hammers on each dumpster hooked up to a computer that programs a backing beat – helpful because Harris and Hardy won’t be able to hear one another as the performance goes on.

As the show starts, the musicians walk out to the center of the lot, between the two dumpsters – 6 feet apart (because COVID). And they’re wearing masks (because COVID). Attached to the masks are 6 feet of corrugated plastic piping, causing each wearer to wheeze with an almost alien-sounding trill.

They start with the Freddy Krueger gloves on the outside of the dumpsters, then they make their way inside. Harris gets his cartoon-gigantic hammer. Industrial machines spew out a wall of smoke, while a row of lights on the side mimic an open flame. An immutable, almost punishing, drone washes over the parking lot; sparks fly as they take power tools to the dumpsters, sending intermittent streams of sparks. 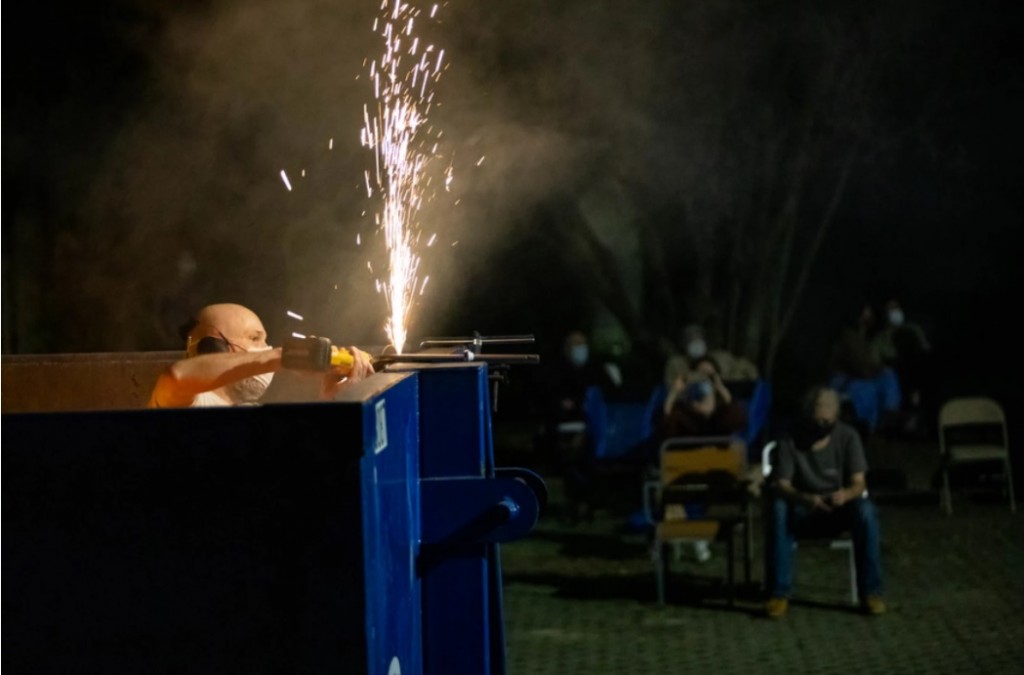 Lyman Hardy uses an angle grinder on a dumpster. He said he’d never used one before this show, but he got the hang of it. Photo: Gabriel C. Pérez

Throughout the show, Erin Hazel and her year-old son, Elio, were bobbing with the beat, dancing to the droning wall of sound. It’s been a challenging year for Hazel, who lost her job because of the pandemic.

“2020 has been a wild ride. [Elio’s] first year of life has been incomparable,” she said. “It was great because he loves percussion and banging on things, and this was a great way to immerse an experience in, I think, a safe way.”

Hazel said she was grateful the event was thoughtfully planned; guests had their temperatures taken at the front gate and masks were required at all times. 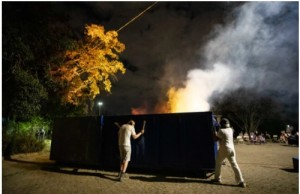 At the show’s climax, Harris and Handy teamed up on a single dumpster to produce a more syncopated rhythm. Throughout much of the show, the two were in their own dumpsters, making it near-impossible to hear one another’s rhythm. Photo: Gabriel C. Pérez

This was the first time she and Elio had gone out since the pandemic – since his birth. It was a nice change of pace, a chance to forget – just for a bit – the dumpster fire this year has been.

Harris said the show is a product of its time, but that it can translate beyond this moment.

“There’s always a need for a huge release of angst and energy and … yeah, it seems especially necessary right now for what we’ve all been through. I think it came along at the right time,” he said. “You know, I can’t wait, of course, to have indoor concerts again, but until then it’s so great that these guys came up with this idea.”

Rolling Ryot says it hopes to take the show on the road when it’s safe. Dumpsters are readily available anywhere, and, if 2020 has proved anything, it’s that dumpster fires can truly happen anywhere.