Skip Navigation
Home > ArtandSeek.net > A Master On Par With Mozart

Tomorrow night, the Dallas Opera presents “The Ring of Polykrates.”  The work hasn’t been heard in the U.S. for nearly 30 years. It’s  by Erich Korngold –best known for his film scores. Here’s why  this nearly forgotten masterpiece deserves its Dallas premiere – only the third American production ever.

“The Ring of Polykrates” opens Friday at the Dallas Opera. Details.

Erich Wolfgang Korngold was a music prodigy, born in Austria. His 1930s and 40s film scores made him famous –   He won an Oscar for “The Adventures of Robin Hood,” with Errol Flynn, and garnered two additional nominations. But years earlier, as a child, he began writing extraordinary classical music, says UNT Music Professor Timothy Jackson.

“Well I would say that Korngold was the greatest prodigy of them all. There was nobody on his level at his age that I can really compare him to.”

Jackson compares Korngold to Mozart and Mendelssohn, the world’s greatest classical music prodigies. Jackson says Korngold still stood apart. Born in 1897, he wrote this short, one-act comic opera, “The Ring of Polykrates,” when he was 17. 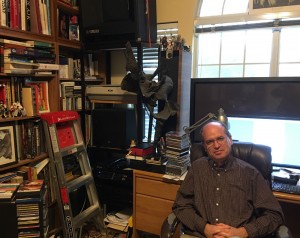 “He found his voice so early in his career. I mean he was only, what 12? 13, when he was writing pieces that were fully mature,” Jackson says. “It was like he came out of the womb fully formed, fully mature.”

Korngold’s first opera focuses on young married couple Wilhelm and Laura, happy, successful, and still in love like newlyweds. Wilhelm’s old friend Peter arrives to visit. Perhaps jealous, he convinces his friend to consider sacrificing something precious so as not to tempt the Gods with all his joy. Peter once coveted Laura. He suggests she might be the perfect sacrifice. Wilhelm should test her loyalty.

In her first aria, Laura reads from her diary. She met Peter Vogel before meeting her future husband. Opera director Peter Kazaras says this aria became famous in its day.

“This was the standout hit that actually was recorded as a single,” Kazaras says.

“And she’s not saying bad things about Peter Vogel. I think she’s just sort of like, ‘he was so clumsy, and you know, he tried to dance with us, and I felt sorry for him. Wilhelm arrived and I realized he was the man for me.’ The sound world changes.”

That changing sound world helped tip critics off to Korngold’s genius, says Tim Jackson.  As Laura recalls Peter, she sings in a minor key. When singing about Wilhelm, Jackson says the sound brightens and moves to a major key.

“The music brilliantly captures the psychological state of the heroine here,” Jackson says. “Again, it’s mind boggling how somebody so young could have that kind of ability to find a musical metaphor for this kind of psychological oscillation between two states.”

And, says director Kazaras, sound so good in the process, even if we don’t know opera or classical music.

“If you go to any big budget movies, you understand his language because he invented it,” Kazaras says. “He was the sort of grandad of Hollywood movie music and there’s a direct line from him right to John Williams. So if you’ve ever heard Star Wars, you know what Korngold sounds like.”

“The Ring of Polykrates” is not Star Wars. But it has Korngold’s signature orchestrations and emotional power that drew Hollywood’s attention in the first place.