It’s spring cleaning season. You might find some old toys while tidying up your garage. Maybe some Beanie Babies, Hot Wheels or Cabbage Patch Kids?

If you discover any old Pokémon cards, you could have a small fortune on your hands. 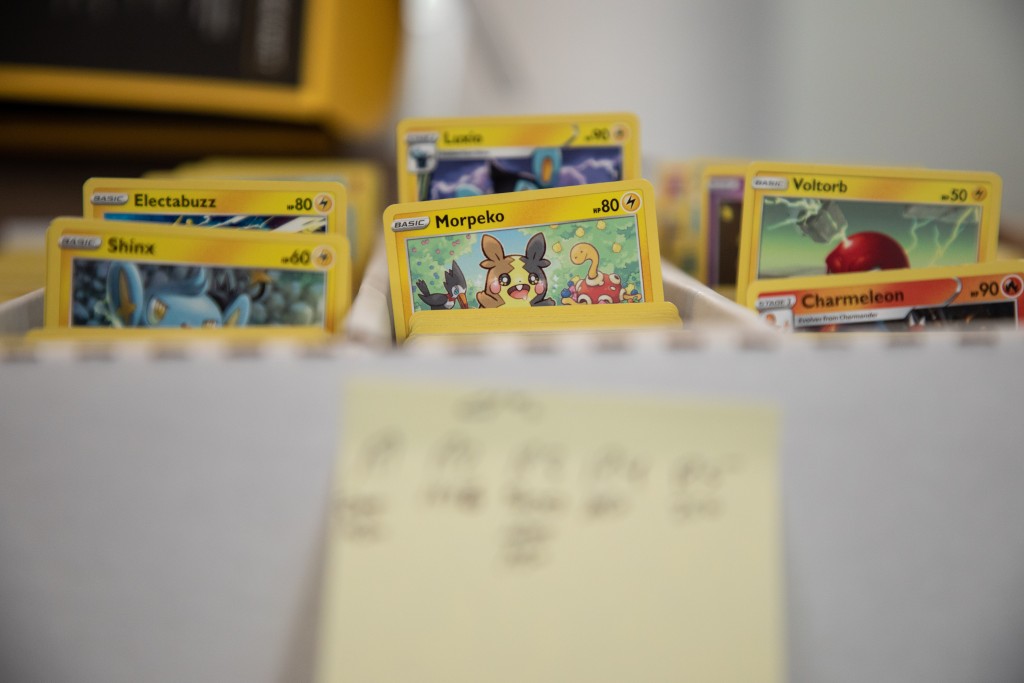 Pandemic-induced boredom has turned many Pokémon fans into avid collectors, leading to explosive growth in the market for the Japanese franchise’s trading cards. Photo: Keren Carrión.

I’ve been searching for new Pokémon cards for weeks to no avail. My teenage bother Max really wants to open up a pack. His request sounded easy enough. The $5 card packs have been mainstays in the toy section of Target and Walmart for decades now, but we’ve scoured retail stores from Plano to South Dallas. The shelves are always bare.

Bummer. I was getting pumped to revisit some childhood memories.

The colorful Japanese monsters were all the rage when I was a kid: Video games, animes, toys, and trading cards. But, that was in the late ’90s and early 2000s. Surely, kids have moved on, right?

I called up an old friend, Minh Hoang, for answers.

Minh and I went to Garland High School together. He was a big fan of Pokémon then, but now he buys and sells these cards for a living.

He says the market for Pokémon cards has exploded in the past year. The chances that I’d be able to waltz into a store and buy a pack were low.

The Pokémon Company has even acknowledged the card shortage in a statement, saying it’s “working to print more of the impacted Pokémon Trading Card Game products as quickly as possible.”

Minh says the market for vintage cards is even more lucrative.

A complete set of the original cards printed in 1999, in mint condition, can fetch more than half a million dollars.

“It’s starting to get kind of scary holding these cards honestly,” Minh said. “I have the full set, all graded in PSA 9, and that’s 103 cards.” 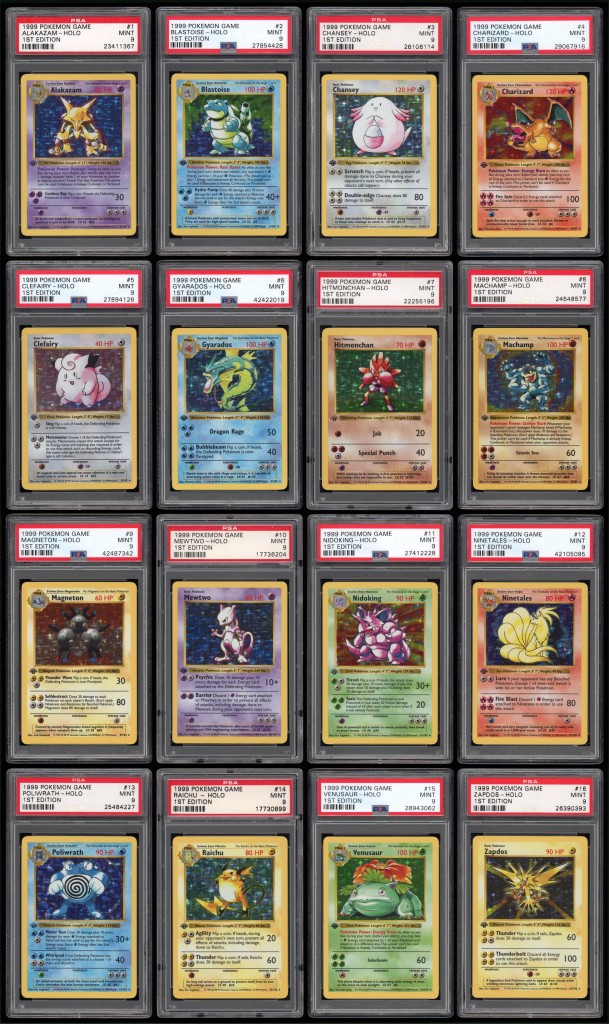 The 16 most valuable cards in collector Minh Hoang’s 1999 English PSA 9 1st Edition Base Set. The entire deck of near-mint cards is valued at roughly $100,000. Photo courtesy of Minh Hoang

Collectors say the market frenzy started back in 2016, when the Pokémon Go app reignited fans. Pandemic boredom has turned many into collectors. Plus, this year is the company’s 25th anniversary. That’s stirred up some major nostalgia.

“Everyone is kind of going a bit crazy on it,” Minh said. “It’s become the popular thing to do on YouTube. People are opening packs and watching each other.”

Last year, Youtubers like Logan Paul, among other celebrities, started buying up valuable vintage packs and opening them on stream.

In the video above, Paul is freaking out about a super rare, first edition holographic Charizard. The fire-breathing orange dragon is considered the crown jewel of Pokémon cards for many collectors. Last month, one of them sold for over $300,000. 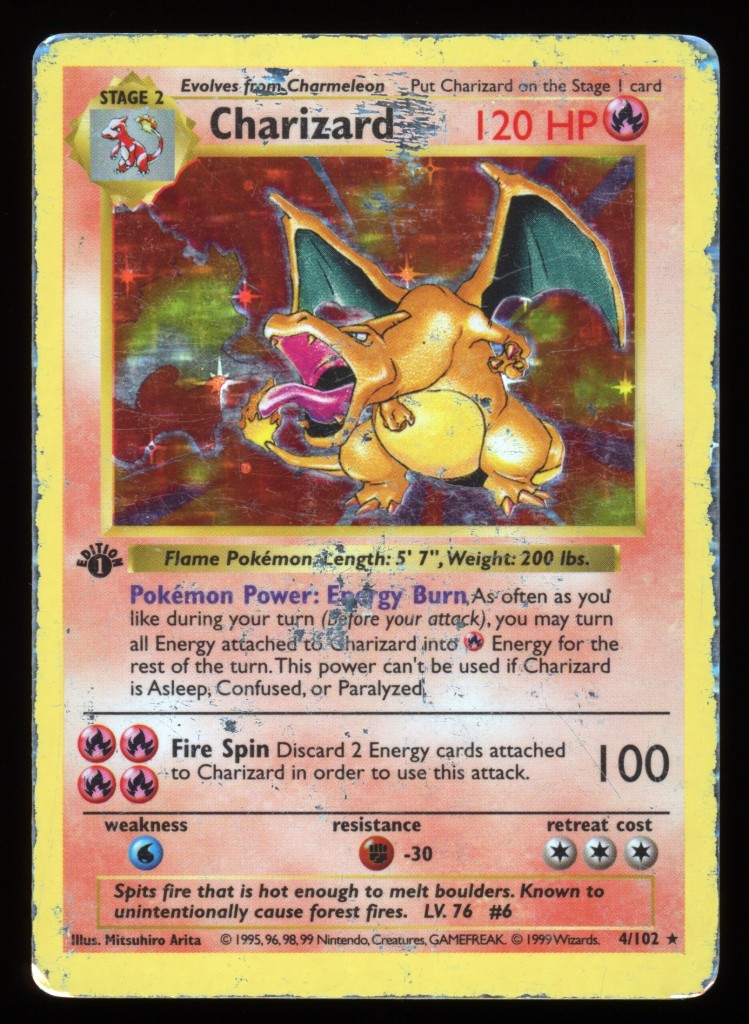 A chewed up 1st Edition Base Set Charizard that collector Minh Hoang recently sold for over $3,000. Even in the worst possible condition, the fire-breathing dragon is still highly coveted by collectors. Photo courtesy of Minh Hoang.

“Obviously, Charizard is the Michael Jordan of Pokémon,” he said.

Emer runs DFW.Pokemon, an entire enterprise dedicated to buying, selling, and appraising card packs and collections, both old and new.

“People were like, ‘Wait, Charizard is worth money?” Emer said. “It got people’s minds thinking to go and look for their cards and dig these things up.”

Emer himself collected Pokémon cards as a kid, and even then, he was especially drawn to the highly-coveted Flame Pokémon.

“I have hundreds of Charizards. I think I just surpassed 750,” he said. “I still have my childhood Charizard. The one I pulled as a kid out of a pack.”

Emer credits the Pokémon Company’s cultural staying power to its business model. For decades, the franchise has consistently created new Pokémon species — along with new games and media — to hook the latest generation of kids.

“20 years from now, they’re going to be the ones buying into the hobby when they have careers and money, and they can do this with their kids,” Emer said.

My inner child really wanted to open a pack after geeking out with Emer, so I asked him where I could get my hands on a pack.

Emer and his DFW.Pokemon business partners brought big piles of the latest packs to an outdoor patio in Lower Greenville, and we got to ripping.

It’s easy to see how people get hooked. It’s exciting and a little nerve-racking opening a pack to see if you’ll pull anything rare or valuable. Most cards are worth a few bucks or less, but every now and then a gem appears.

We pulled a shiny, rainbow-colored Flapple worth about $20.

It’s no Charizard, but we’ll take it. Who knows what it could be worth in ten years.