Skip Navigation
Home > ArtandSeek.net > Aiming To Cheer An Ill Neighbor, A DIY 4th Of July Parade In The Cedars May Become Tradition

Leslie Pritchard felt helpless, so she decided to host a parade.

Her friend and fellow Cedars community member, Mark Ford, was diagnosed with grade four Glioblastoma — brain cancer. Long time Cedars resident, Jay Baker, was with Pritchard at the neighborhood bar Lee Harvey’s when she came up with the idea.

“She happened to say, wouldn’t it be great to build a fourth of July parade that would go by his house, because he’s  probably not really capable of going somewhere,” Baker said. “And at the time I was like: well, that’d be great, but it’s three weeks until the fourth, I’m not sure we can do that at this point. But it didn’t seem very daunting to her, and she said I am going to do it.”

With the help of Baker and other members of the community, she did do it. Filmmaker Mark Birnbaum, also a Cedars resident, captured the parade on video and shared it with Art&Seek.

Ford is “just the nicest guy in the world, so I just thought to myself, I want to do a parade,” Pritchard said, of Ford. “If I could get the parade to go down his street and I could get five hand-pulled floats — I was going to make floats out of wooden pallets — the idea was just to create a little happiness, but the word spread like wildfire, and in three weeks, we created what you just saw in that video.” 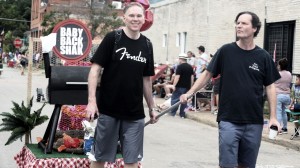 Pritchard asked Baker and Albert Scherbarth, an artist and Cedars resident, to modify wooden pallets that she had from her vintage furniture business, Again and Again, to function as miniature floats. She got the word out to the community through social media and by going door to door handing out flyers. She called local businesses, artists, and community members to see if they wanted to make a float and even made six herself. Pritchard hoped that the floats could help local businesses connect with the community after the financial difficulties of the pandemic.

The Cedars Neighborhood Association heard about the plan, and gave Pritchard a committee to help her organize the event. Baker said they hoped for maybe five floats and around 50 people, and in the end, they had more than 14 floats and around 250 people attend. A variety of businesses and artists represented. There were even two princesses of the parade — including Ford’s two-year-old daughter. Pritchard’s sister led the parade, and right behind her, Ford sat in the passenger seat of Baker’s vintage Cadillac waving to the people who came to the parade to support him.

“I was thrilled,  having Mark next to me just smiling like crazy. He was just so happy,” Baker said. “He’s always been one of those guys you just wanted to be around, and I guess his employees feel the same way about him because they came out and were cheering him on.” 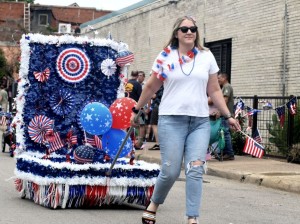 Pritchard was ecstatic that she achieved her goal of bringing a little happiness to her friend but regrets that the last-minute nature of the parade meant that some community members couldn’t participate. Despite the quick turnaround, she said there was magic to the chaos.

“The whole thought behind it was just homespun and grassroots. Being imperfect sometimes is the most perfect thing you can do,” Pritchard said. “It was such a feel-good event and what I think was so incredible was that if not for the outpouring of love for Mark Ford, it would have never happened, and it what it brought beyond that love was the unity of this neighborhood.”

Baker said that while long time residents of the Cedars are very close knit community, many of the residents who moved to the neighborhood in the last two years haven’t had the chance to get to know the community. 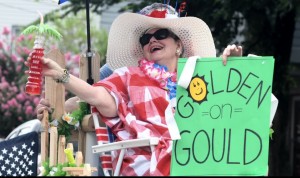 “I don’t think they were really getting out and realizing how many people lived in the Cedars, and so that brought a bunch of people out,” Baker said. “I met a ton of new folks and they were just like I can’t believe all this is going on down here, and I’m like, yeah, it’s actually a cool place to live.”

Pritchard has already begun planning for next year’s parade. While Baker says he is excited for the future of this independence day tradition, he says it is about more than just being patriotic.

“As much as it was for the fourth of July, it was also to bring some joy to the neighborhood,” Baker said. “I think everybody was a little tired of the last year, and Leslie just thought of a way to tap into getting everybody out and excited about something.”