There was a buzz in the air and on the sidewalks of Perry Avenue in Dallas on Saturday June 11th.

ENDLESS/NAMELESS at The Reading Room on June 18th & 25th

Most of the people walking along the hot pavement were on their way to Fair Park’s 80th Anniversary Celebration, which included live music and family friendly happenings. But a crowd of about 40 to 50 stood across the street from the festivities, sipping beers, chatting with friends and waiting to enter  The Reading Room. 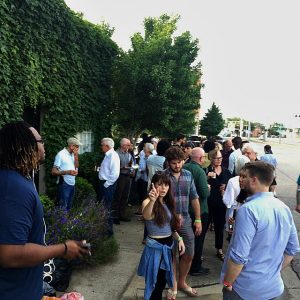 Outside The Reading Room for Arthur Peña’s “Endless/Nameless.”

The Reading Room is a local gallery where one can usually view photography, paintings or even participate in a book exchange. But, on this night, the walls were stripped bare and the room was converted into a performance space for a new project by Arthur Peña, a painter – and writer, music promoter and now, composer.

To hear about Peña’s musical, his beliefs on art and his motivations take a moment to listen to the audio snapshot at the top of the page.

Only 30 in the crowd received wristbands guaranteeing entry. The rest would need to wait around to see if they could squeeze into the room to view the first in a series of three “collaborative musicals” developed by Peña. The second installment of “Endless/Nameless” takes place  this Saturday at the Reading Room.

The musicals spring from a much smaller piece Peña created and performed last year at the Nasher Sculpture Center.  Then, Karen Weiner, founder of The Reading Room, gave Peña the opportunity to expand his vision.

Just after 8 p.m., Weiner stepped out of the gallery as smoke from a fog machine billowed behind her and she invited people to enter the space. 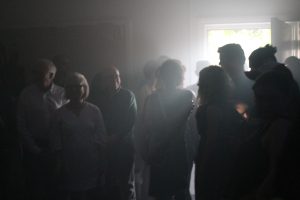 Waiting for show time inside The Reading Room.

Once inside, the only light in the room came through the front door.  Weiner announced that the performance was about to start, the door was going to be locked and that if that was of concern, the time to leave would be now.  No one left. The lights went out and the bizarre yet affecting production began.

The 33-minute show was a series of performances  exploring relationships, beauty, loss and release through piano composition, poetry, song and film.  Each performance was preceded by a blackout, and introduced with a red, purple or blue overhead light.

The show kicked off with Ariel Saldivar singing an acapella version of Beach House’s “Used to Be.” The song set the tone for evening, informing us all that we’d entered a vulnerable space and that shifting dynamics within relationships were going to be discussed.  Saldivar and Drew Chapa paired up for three performances during the evening. The two were most effective when they were singing. Their final piece, in which they spoke about an upsetting trip to the grocery store and wilted spinach, wasn’t as compelling.

The most compelling interlude of the evening was given by emcee Lord Byron (Byron Neal). A red light shined in the middle of the room, but Lord Byron was nowhere near it. He was hidden in audience. As he moved around, the crowd searched to keep track of him. His booming voice filled the room with verses about the demise of a relationship. He crawled, he knelt, he screamed and he evoked the raw feelings of disappointment with love. 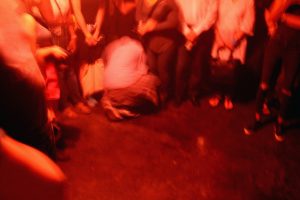 Lord Byron as he performs his interlude.

Writers Dennis Congdon and Fatima-Ayan Malika Hirsi also performed interludes. Congdon read from a six-page essay he wrote for the evening and Hirsi composed a new poem on her typewriter in the middle of the room. In the next scene, Saldivar read Hirsi’s poem. To complete the evening, Michael Moris presented a film of a couple either having sex or rolling around in bed – it’s unclear. The images were hard to make out and they seemed to deteriorate and distort frame by frame – like a failed relationship.

The score for Peña’s musical was provided by composer/singer Poppy Xander. The songs were performed on electronic keys and were very synth heavy and episodic. 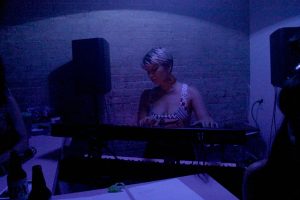 Peña and friends have two more performances, but each will be unique. Saturday’s show will feature one new actor/singer, Samantha Rios; interludes by Amber Renaye, Drew Chapa, Francine Thirteen, Randy Guthmiller, Samantha Rios and an original score by Jess Garland.