Jeremiah Onifadé’s paintings look like scenes from an alien world, but they’re rooted in reality.

The 33-year-old painter lives in southern Dallas. He was raised in Nigeria, and his work walks the line between both worlds. Sometimes, that means tapping into some difficult memories.

He says his creative spirit was lit by a violent spark.

“Corruption ate me up in Nigeria. Ate my family up in Nigeria,” Onifadé said. “That’s something you can grasp onto. That’s what the work speaks of.” 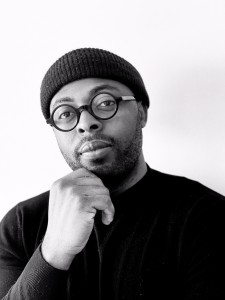 Jeremiah Onifade, courtesy of the artist.

He was 13 years old when his family fled Kaduna State in northwestern Nigeria. Riots involving Christians and Muslims broke out in 2000, after Kaduna’s governor introduced sharia law in the state.

“And before you knew what was happening, it was gunshots and gunfire,” he said. “Every other time I looked out the window, it’s like a neighbor with a machete to the head, another one with a gunshot to the knee. We started hearing people screaming “Fire! Fire!” They had started burning people’s houses.”

Thousands of people died in the Kaduna riots. Onifadé’s family fled to a camp in southern Nigeria.

His purpose as an artist—what he calls his consciousness—was born out of that experience.

“I started trying to figure out why would people want to kill themselves,” Onifadé said. “What was the news? What did this government actually put out that destroyed people’s lives?”

He had questions in the aftermath, about the violence he witnessed, human nature and the weight of our actions.

He looks for answers in his paintings: colorful and surreal scenes full of cryptic characters. He calls the snakelike figures that wisp along his canvases “cods.”

“They’re like ropes, but they’re my explanation of the human emotion,” Onifadé said. 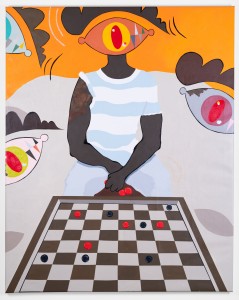 His latest works will be on full display starting this weekend. He has his first solo show at SITE-131.

It’s been a long, twisted road for the painter. Onifadé immigrated to the U.S. eleven years ago to study art.

He got a grant from the City of Dallas in 2019 to mount “Blue Dot,” a show in a small house in South Dallas’ Bonton neighborhood.

“The whole goal of it is to bring something into a neighborhood like that, where nobody literally will come to or thinks about because I know how it feels growing up in Nigeria,” he said. “Nothing will come there. It will never come there. Why are we not wondering why things don’t go there?”

Like much of his work, the project created connective tissue between a childhood in Nigeria and his life in the U.S.. 2020 brought an even stronger link, when Onifadé saw protests against police violence unfold in both countries.

The spread of misinformation during Black Lives Matter protests in the U.S. felt familiar to the artist.

“It directly took me back to Nigeria,” Onifadé said. “Politicians that were on the TV saying Black Lives Matter is not a real thing. Social injustice doesn’t exist. Systemic racism. It’s a smoke. It’s not real. It’s the same with the leaders in Nigeria saying, ‘Hunger? What hunger?’”

Jeremiah Onifadés “Portrait of a Young Boy With a Faltered Smile,” courtesy of the artist.

Calls to defund the police in the U.S. mirrored protests in Nigeria demanding the end of a notorious police force called SARS. Critics say the unit has long acted with impunity. There’ve been documented cases of torture and extrajudicial killings.

“Right now, I look at the news in Nigeria, and there’s just so much fight just to make the government believe that SARS kills people and don’t do the regular police job,” he said.

These events are not spelled out in Onifadé’s paintings. Instead, he offers symbols and clues. A wheelbarrow in one of his works alludes to Nigeria’s booming crude oil industry, which comes at the cost of the country’s poorest citizens. 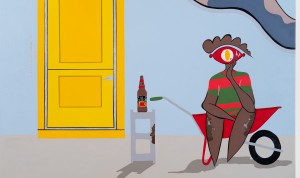 Jeremiah Onifadé’s “Recushioning With Panadol Extra,” courtesy of the artist

He mines his own memory for inspiration, but to Onifadé, the individual is not far from the whole.