In Dallas, city officials are hammering out the budget for the new fiscal year. And one budget proposal has some in the arts community raising eyebrows. It’s a proposal to pay $1.5 million dollars a year for the next ten years to help the AT&T Performing Arts Center pay down its debt. Many small arts organizations and cultural groups oppose this plan, and they rallied against it over the weekend.

Close to 70 artists and supporters of the arts gathered outside of Dallas City Hall on Saturday morning to voice their displeasure with the proposed bailout of the AT&T Performing Arts Center.

The rally featured performances by poets, dancers and actors as well as speeches by well-known advocates for arts and cultural equity, like David Lozano of the Cara Mía Theatre Company.

“What do we think of the ATTPAC bailout? Do we want it?” Lozano asked the crowd at the Art Equity Now rally. The crowd shouted no and he agreed. “No. [We don’t want it] because it creates class divisions in our arts community.” 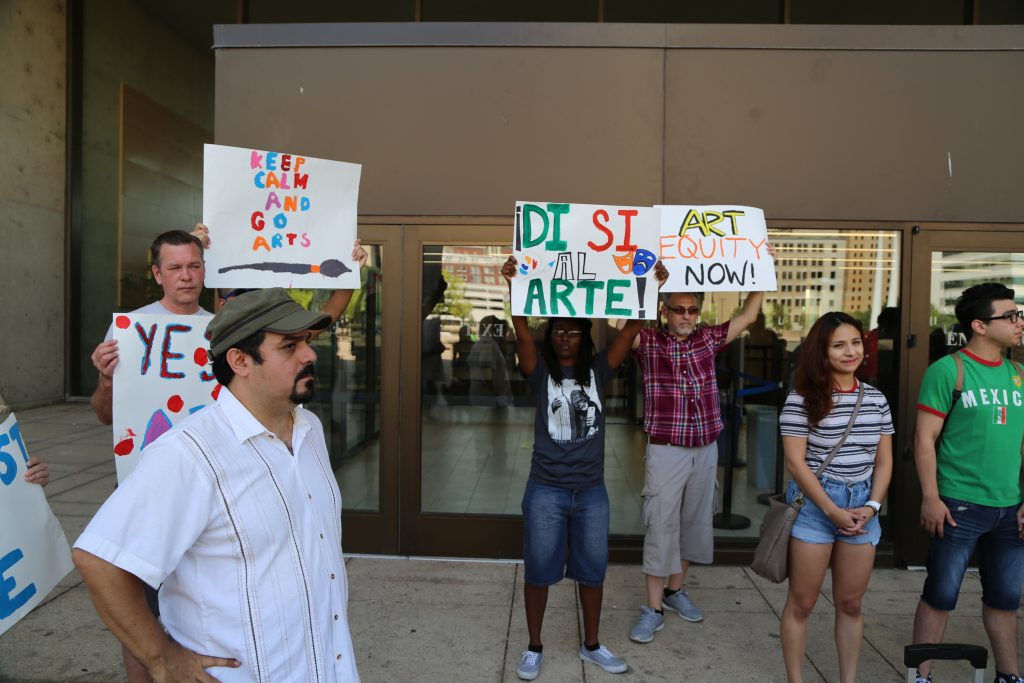 Lozano and other critics of the proposal said helping a major institution like the performing arts center with its debt isn’t fair to artists and smaller arts groups based in other city neighborhoods.

“We feel that city officials aren’t’ seeing the breadth of the needs of our arts community,” said Lozano.

Lozano said helping the performing arts center won’t help small theater companies without a venue to perform in, and it won’t help individual artists grow within their communities.

“The idea was that we’d have arts centers all over the city. That there would not be this whole centralized notion that everybody has to go down town to an arts center,” said Meek. “We wanted [cultural centers] to be all over the community.” 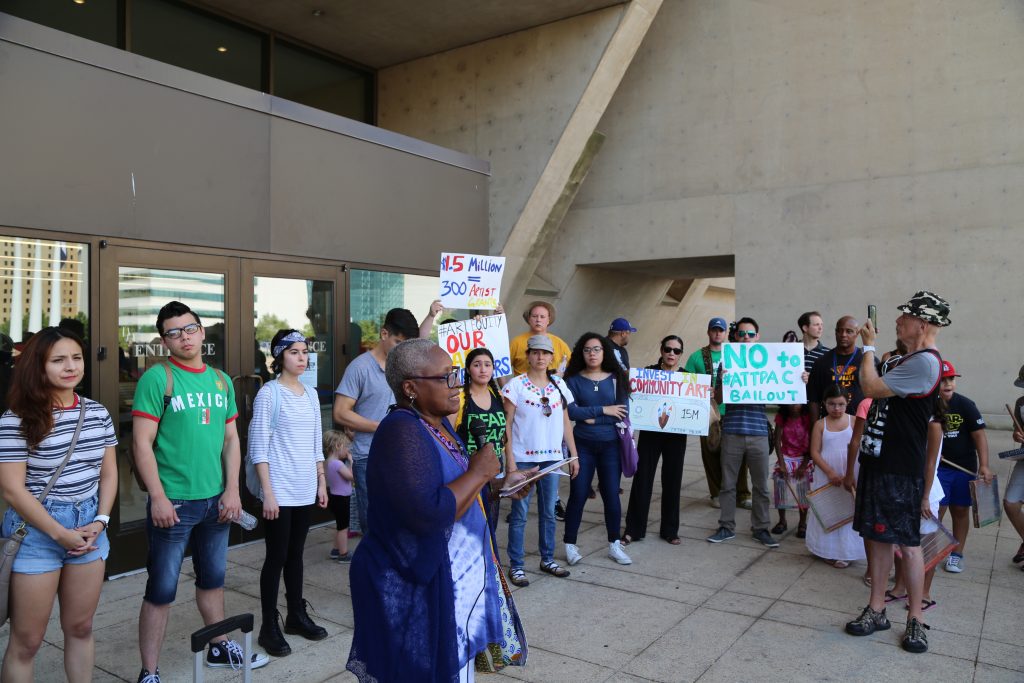 Vicki Meek talks to crowd about organizing and the importance of knowledge.

Currently there are four cultural centers: South Dallas, Oak Cliff, the Bath House Cultural Center near White Rock Lake and the Latino Cultural Center just north of downtown. Activist for the arts want more centers like these and more money for their programs. 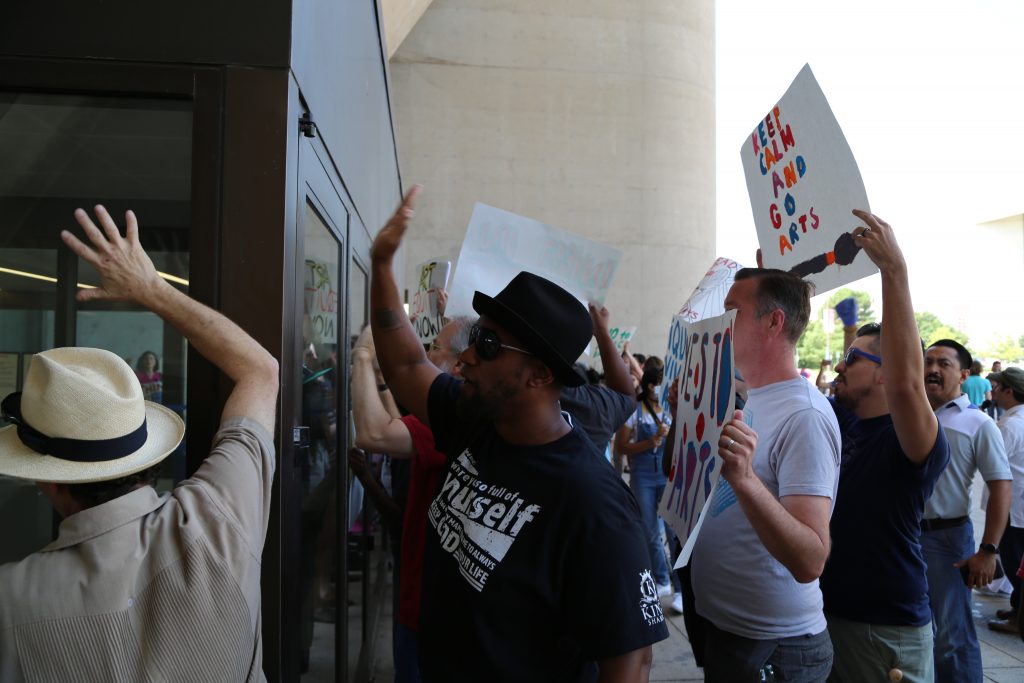 Demonstrators banged on the doors of City Hall as part of the rally.

The new director of the city’s Office of Cultural Affairs, Jennifer Scripps, said she hears the complaints.  She hopes there can be provisions that will make some groups happy.

“The vision is that the services from AT&T PAC can be services that are used by smaller arts groups across the city,” said Scripps.

Scripps said that there are still negotiations going on with AT&T PAC officials to share with smaller arts groups.

“They have a big marketing arm in the form of their web blasts and their website, and they are going to build a community stage and are working to get some more space freed up in some of their venues for some of the smaller arts organizations to use.” 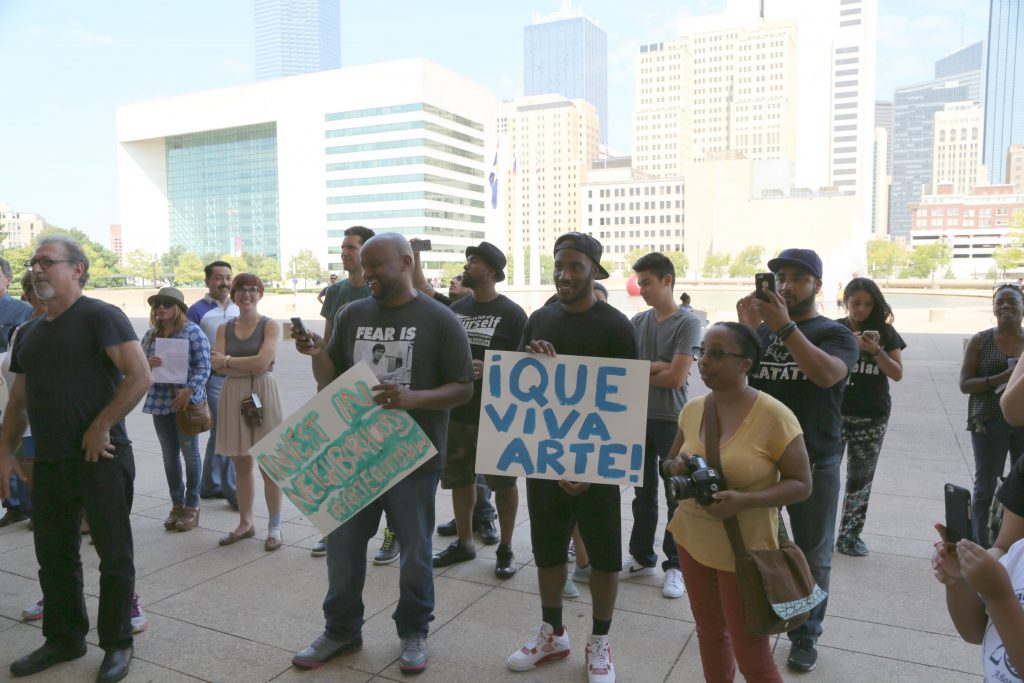 The city council must approve the budget by October 1st. There’s no guarantee the council will consider different ways to fund the arts before then. But Vicki Meek is preparing for the next part of the fight by helping a new generation of artist activists understand things like the city budget-planning process.

Meek said that if artists want equity, they can no longer wait for it to be handed to them. They need to take it. But the first step to doing that is learning the rules of the game.