Skip Navigation
Home > ArtandSeek.net > Arts Critics Are Disappearing From Newspapers. Or, Wait, Is That The Good News?

A few months ago, the ‘Fort Worth Star-Telegram’ laid off its last full-time arts critic. The same thing has happened with daily papers in Sacramento, Louisville and Cincinnati. Even Australia. The wave seemed to start last winter with major cutbacks at the ‘Wall Street Journal,’ which had expanded its coverage to compete with ‘The New York Times.’ Art & Seek chatted with several area arts leaders who are concerned about what this means for coverage of their efforts. In this week’s State of the Arts, reporter Hady Mawajdeh and Jerome Weeks discuss how the arts media landscape is being disrupted. 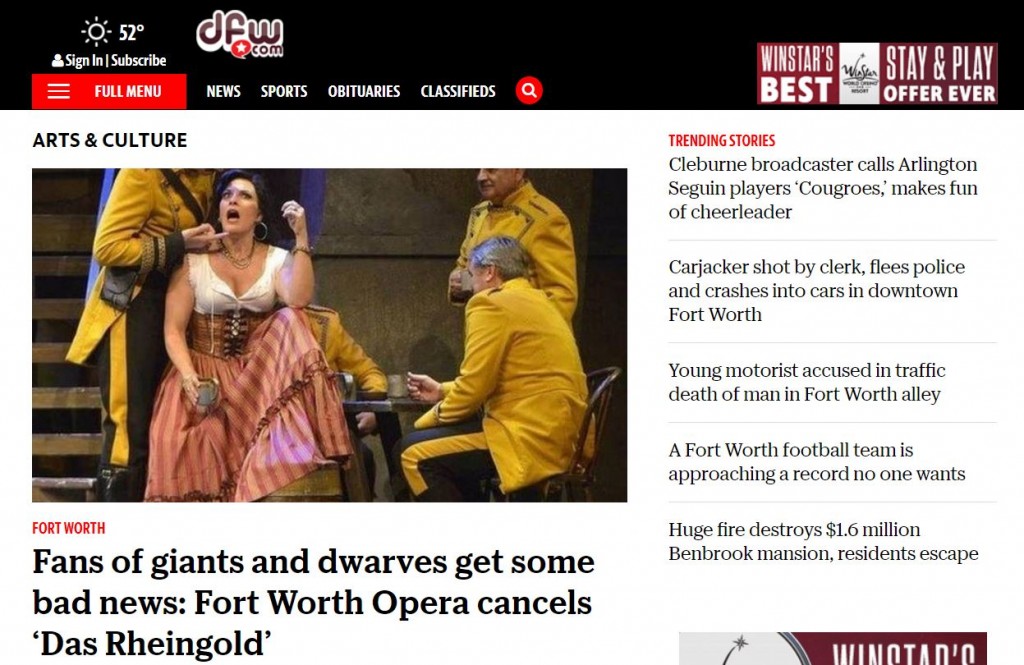 Photo of “Arts & Culture” section of Fort Worth Star-Telegram’s website.

Hady: Jerome, this is the latest wave of cutbacks in cultural coverage. But isn’t this the story we’ve been hearing for more than a decade now? Legacy media, like newspapers, have been downsizing staff because of their major losses in ad revenue. And arts reviewers have been a part of that.

JWTrue, but this latest round means not a reduced staff of reviewers but no critics at all at major city papers. That’s a watershed. The arts here, for instance, have been blossoming the past decade, while arts coverage has gone the other way. Fort Worth is the home of the internationally-known Cliburn competition and Kimbell Art Museum — that’s pretty unusual for a city its size. Yet the local paper now has no arts critics on its staff.

To be fair, ‘Star-Telegram’ executive editor Lauren Gustus emailed me to say they’re not discontinuing reviews. They’re looking for great stories to tell to a cellphone-connected audience – just not necessarily in the “parameters of a classic ‘review.’” But I have to say in the nearly two months since that email, features or reviews on Fort Worth arts have been rare.

Hady: So we do what everyone’s doing. We learn about what’s going on through our friends on Facebook, through our Twitter feeds.

JW Yes, that’s becoming the norm. But we’re losing something with the lack of professional critics, somebody whose job it is to keeps tabs on day-to-day developments, who can put individual arts offerings in a knowledgeable context. Jeffrey Schmidt, artistic director of Theatre Three, says Twitter and Facebook have some serious limitations:

“The buzz always helps. And that’s what you’re hoping for via social media. In terms of critical analysis of the work, ten years from now, what will we have to prove that this was important to what was happening in the world? That’s why we need good critics.”

Several directors also pointed out that when they apply for grants from some foundations, they’re required to prove they’re worth funding, what they do has value to the community. And tweets won’t do that; they need reviews. 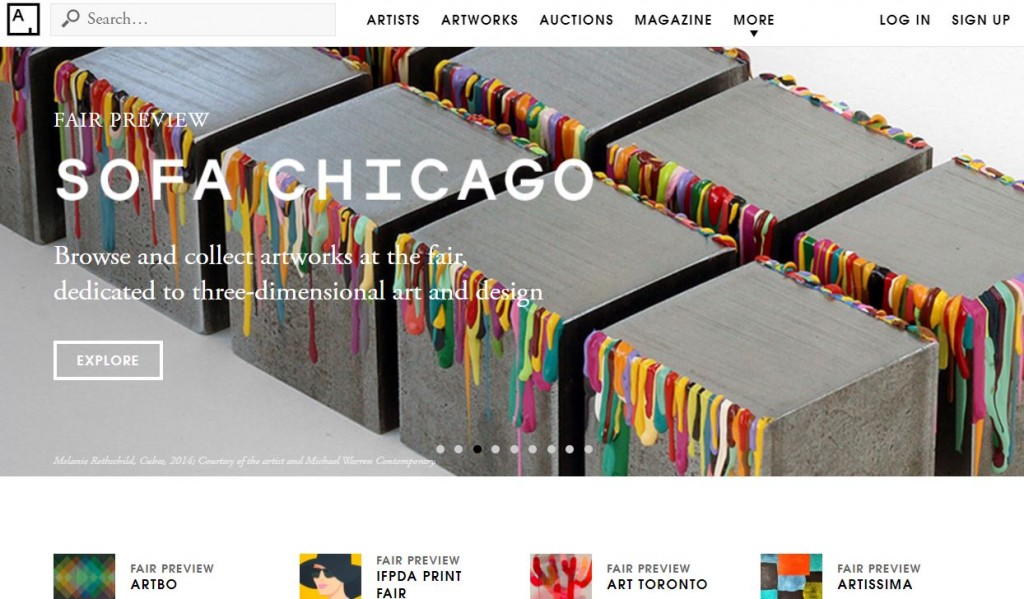 The homepage for Artsy. Artsy’s an aggregation arts blog.

Hady: So go online – there are plenty of bloggers and websites devoted to music acts and new art forms and behind-the-scene peeks at museums. They’re covering a lot that traditional media hasn’t really been covering, and for audiences they didn’t really address.

JW You’re absolutely right. I spoke with Doug McLennan, he’s the founder of Artsjournal.com, one of the leading aggregators of high-quality online arts journalism. He says we’re in this transition. We’re losing reviewing jobs. Meanwhile, online, this could be a golden age for writing on the arts, on literature and music — from places like The Atlantic to individual blogs.

“A lot of the writing in some of these smaller sites are more informed and interesting and sharper than you used to get in the local papers.”

Hady: So is this the last of the old-school cultural gatekeepers?

JW I know that’s a favorite term, but it’s nonsense. Critics aren’t gatekeepers. They’ve never prevented someone from seeing or hearing or reading what they’d like to. The real gatekeepers are at the ATTPAC or the Fort Worth Symphony or Granbury Opera House or any cultural organization or subscription service online — outlets that say, pay up before you enjoy this experience we offer.

Hady: So how do we choose that experience?

JW  Well, if we’re buying a new car or TV, there are thousands of websites that’ll tell us these are the top 10, these are their features, maybe you should go with an earlier model, they last longer. Such guidance is hardly the only thing good critics do, but it’s one of their fundamental functions.

So let’s reverse-engineer our thinking about digital and real-life: All the cultural offerings in a city are like a giant, analog version of Netflix. Or like the internet itself. People talk about binge-watching on Netflix or becoming immersed in the web. They don’t talk about what most of us actually do: scroll through menu after menu,  webpage after webpage, YouTube video after YouTube video, wondering if this or that is something we’d enjoy, something worth stopping for and spending our time on.

The same thing with a city’s cultural offerings: How do we decide among all the concerts, simulcast operas, dance troupes, book signings, stand-up comics, movie screenings and pumpkin farms on a single weekend?  Newspaper critics have been one, traditional guide. An educational service. 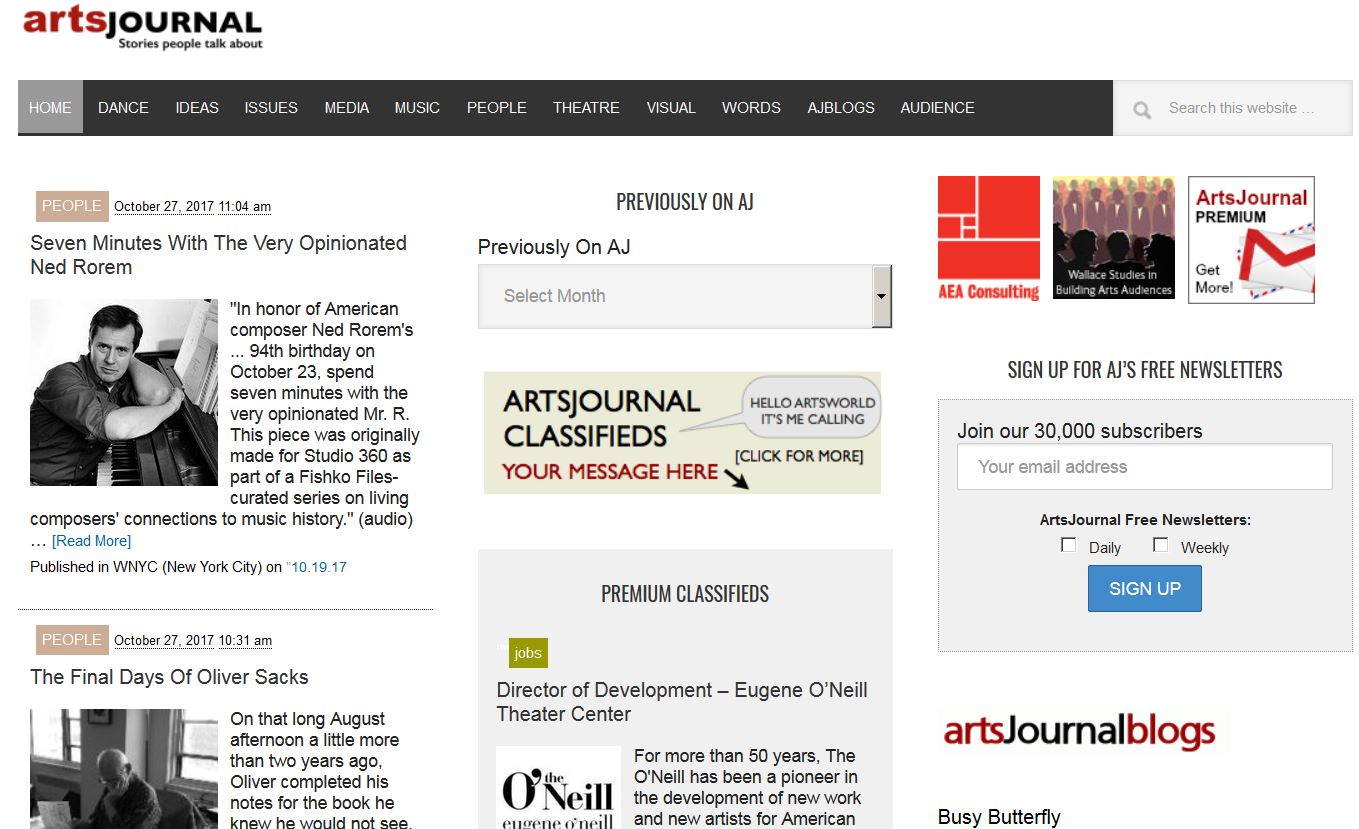 Artsjournal.com, Doug McLennan’s website, has been curating arts news and blogs since 1999.

And the reason they’re now being lost isn’t because media outlets haven’t tried to keep up with the times, haven’t addressed different audiences. Or actually, it isn’t just because of those things because those are real faults.

But basically, bottom-line, it’s because the cultural criticism we provide is local. In many cities across the entire country — outside of big touristy centers like New York or Chicago or LA, where a commercial arts industry flourishes — there’s not enough money, not enough of a general-readership market to support paid, full-time, on-staff local critics.

When we think of cultural critics – if we think of them at all – we often imagine the current crop as direct descendants of a line that started with, say, Vasari on Italian Renaissance painting through Charles Baudelaire’s literary criticism and George Bernard Shaw’s drama reviews and on up to influential figures like Edmund Wilson and Clement Greenberg in New York in the ’50s and ’60s.

The flaw with this imagined line of ancestry is that all the Great Critics from the past typically lived and worked in their country’s single, major cultural center. In America — outside New York City — local arts reviewers didn’t even appear in most daily papers until the mid-‘70s – back when newspapers were pulling down 18 percent profit margins. Newspaper owners and editors began getting ambitious, feeling they needed to be taken seriously and their city’s cultural climate needed to be seen as sophisticated (or just given a boost). Before that, big-city daily newspapers often just had a single ‘arts columnist,’ a local arbiter of taste, often the society columnist or certainly a columnist who appeared on the ‘society’ or ‘woman’s page’ – like John Rosenfield of ‘The Dallas Morning News.’ Consider Bensinger, the poor, effeminate journalist who dabbles in poetry in ‘His Gal Friday.’ Cary Grant, as hard-charging editor Walter Burns, hires Bensinger to write a poetry feature or literary column to buy him off.

Burns immediately calls an underling and tells him to let Bensinger work for a week and then fire him. So much for the historic place of literature in this history of big-city American journalism.

In other words, our hinterland professional newspaper critic has existed, has exerted his or her influence, only for what amounts to a blip of cultural time, just the last 40 years or so. It’s little surprise that when the 18 percent profit margins went away, so did reviewers’ positions and the pages they once commanded. What was seen as a community service has been mostly jettisoned. Owners and editors have often claimed it’s because the arts section doesn’t generate enough advertising revenue. But then, the editorial page doesn’t, either, but that particular bit of influence, the editor will not surrender. It wouldn’t be a newspaper without one. (The sports sections march on, of course, thinner certainly, but online, they’re often a paper’s major portal: People around the world come to the ‘DMN’ for Cowboys coverage; as a result, it’s practically the Cowboys’ company website.) 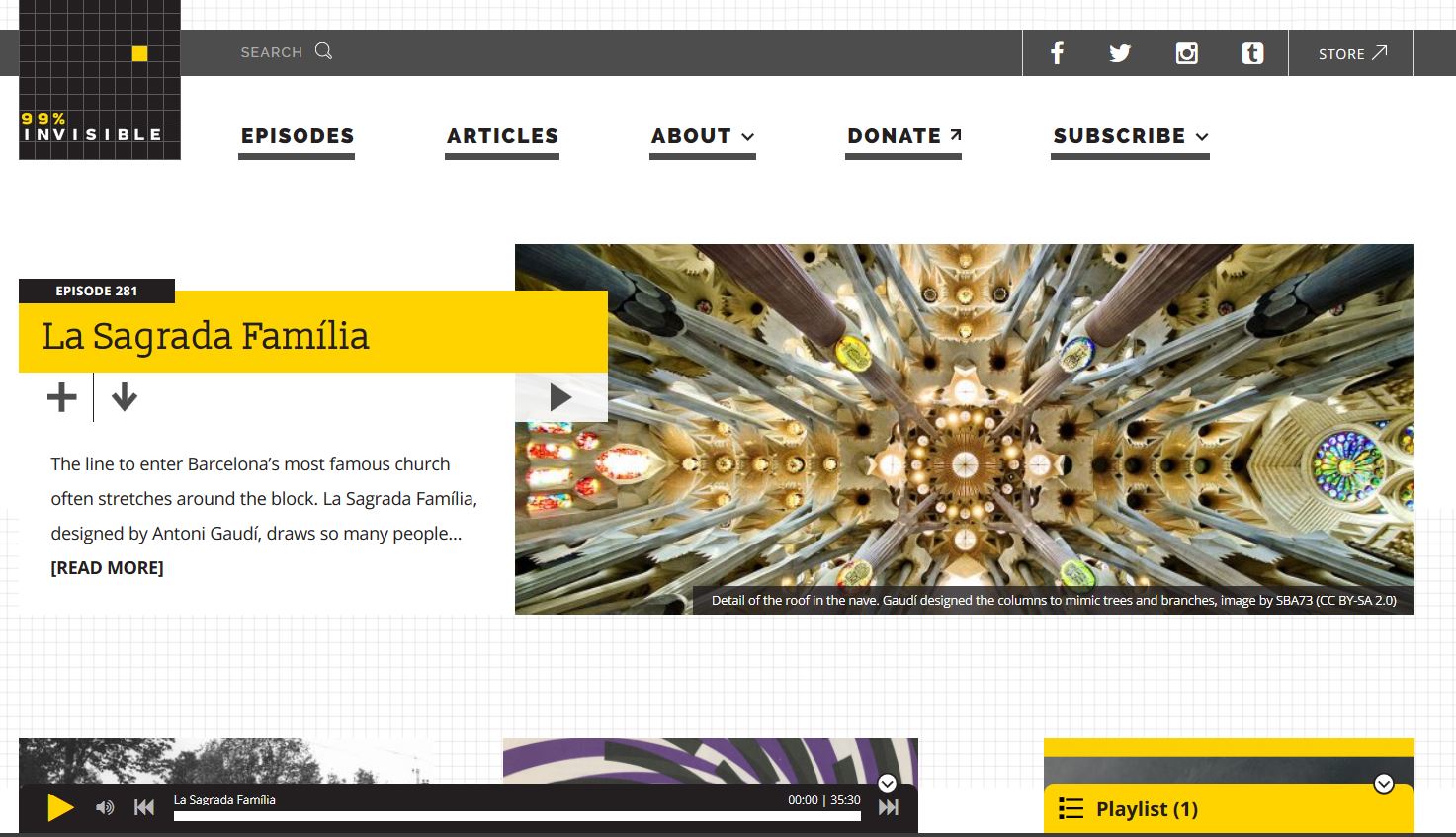 99% Invisible, the website and radio program, is devoted to the architecture and design we take for granted.

In other words, newspapers, magazines and arts journalism are more or less returning to the baseline situation that has obtained in cultural criticism in America since … well, forever. One of the reasons Edgar Allan Poe’s life was so desperate is that he was one of the first Americans to try to make a full-time living as an editor-poet-lecturer-journalist-short-story-writer-critic, one who wasn’t also a university professor. Poe wrote during an early age of literary journals and periodicals in America, and he became a lightning rod, an influential literary figure.

And he never really escaped poverty.

Hady: Again, I return to my previous point. Go online.

I do go online for a lot. But that lack of real careers in local arts coverage holds online as well. Such smart sites as Hyperallergic and Glasstire have even brought back long-form art essays (partly as a result, Glasstire’s editor-in-chief, Christina Rees, recently won the first $40,000 Rabkin Prize for arts writing). What you’ll also find on most such sites are critics who are the editors or the website founder, the only people making a living with the site. You’ll find many university teachers doing arts journalism as a sideline, as a passion, or you’ll find fans and boosters (who often could be found among local newspaper critics, of course). You’ll find artists and writers and musicians doing podcasts and videos as a sideline.

But if you can find a full-time, paid writer online doing nothing but local reviews as a career, I’d like to see his or her business model. Or meet the spouse that’s supporting him or her. What we may be seeing is the end of a (fleeting, momentary) profession, the passing of the local, big-city, drama, book, music, film and visual arts critic writing for a general audience publication.

Put another way: Professional cultural journalism is not just returning to its classic form in America. It’s joining the rest of the cultural industry buffeted by digital change: It’s becoming part-time, piecemeal. On the other hand, as Doug McLennan of Artsjournal pointed out, people thought the American bookstore was dead, too. The past several years have seen incredible growth in the numbers of small, independent bookstores.

Hady: So where does that leave art groups?

JWDoing what many traditional media outlets still haven’t managed to do. Putting money and writers and real smarts into new media — to reach audiences, to tell their story.

That’s something else McLennan said: Quality content is what eventually wins out – in the arts, online and in journalism.