Carey Young: The New Architecture through April 2 at Dallas Museum of Art. Details.

Young’s been interested in law and its male dominated hierarchy for many years. Seh brings us along on a clandestine, non-sanctioned, permission denied, but legally advised, peek behind the scenes of the closed doors of the courtrooms of the Palais de Justice in Brussels,  an enormous, ornate 19th century courthouse, architecturally  poised to overwhelm and dwarf  its inhabitants.

Young seduces us to follow her with shadowy shots and moody lush colors. Although there is no dialogue, Young engages us with repetitive echoing background noise (reminding one of  meditative Gregorian chants) and mesmerizes us with fade-outs and  lingering portrait close-ups secretly shot.

The Palais is the perfect site to stress the new world order Young wants to acknowledge and applaud: the power of women in law. Architecturally, the Palais is suited more  to the once male-dominated profession. The stone and marble are cold and hard, and Young contrasts that almost immediately with a voyeuristic shot of the  dangling bare legs of a young  woman lounging in a marble lobby window seat. 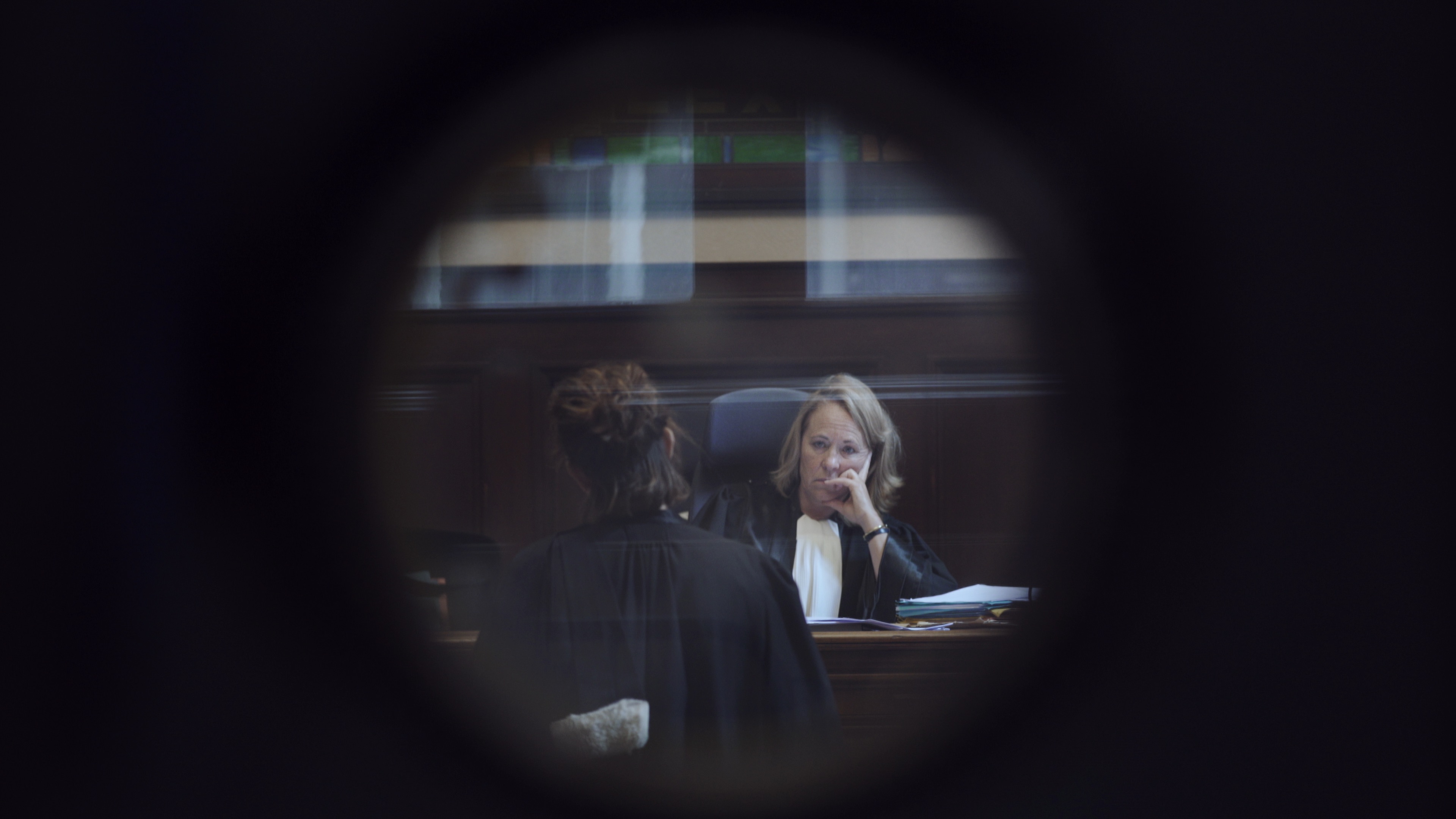 Further into the courtrooms themselves,  Young reveals a unique legal system, seemingly run by women. She appears  to say, “Come on men. Look here. See what we women really look like. Look through these courtroom porthole windows, instead of the peep holes at raunchy fairs. See capable women, powerful, pondering women. See women robed, rather than unrobed.” And yet, at the same time, Young does make the women in the  video alluring enough to capture and control the male gaze of the peeping Tom.

There is an unequivocal sexuality to the video. Because it is installed to cover an entire gallery wall, it envelopes and embraces the audience in the darkened theater. The glimpse of a gold bracelet and earrings offer evidence of  femininity. Loose tendrils of  hair fall upon exposed necks, and  bits of undergarments, seen here as the exposed cuff of a striped T shirt , peeking out from under a black robe, show us private and personal parts of a Judge we are not used to seeing.