Hospital elevators are sort of like green rooms for Tiffany Riley and Dick Monday.

“That’s when Dr. Slappy lets one rip,” Monday jokes, as they head to the fourth floor at Cook Children’s Hospital in Fort Worth.

The short ride gives them a moment to warm up before they make the rounds.

“I don’t know what you’re talking about,” Riley says, as one long, fart sound goes off from somewhere in her pocket.

“Yeah, it’s just the worst place to do that,” he says.

For the past 20 years, Riley and Monday have been making young patients across North Texas laugh as professional healthcare clowns.

The Laughter League, the nonprofit that the pair are a part of, is the only professional healthcare clown program in Texas. 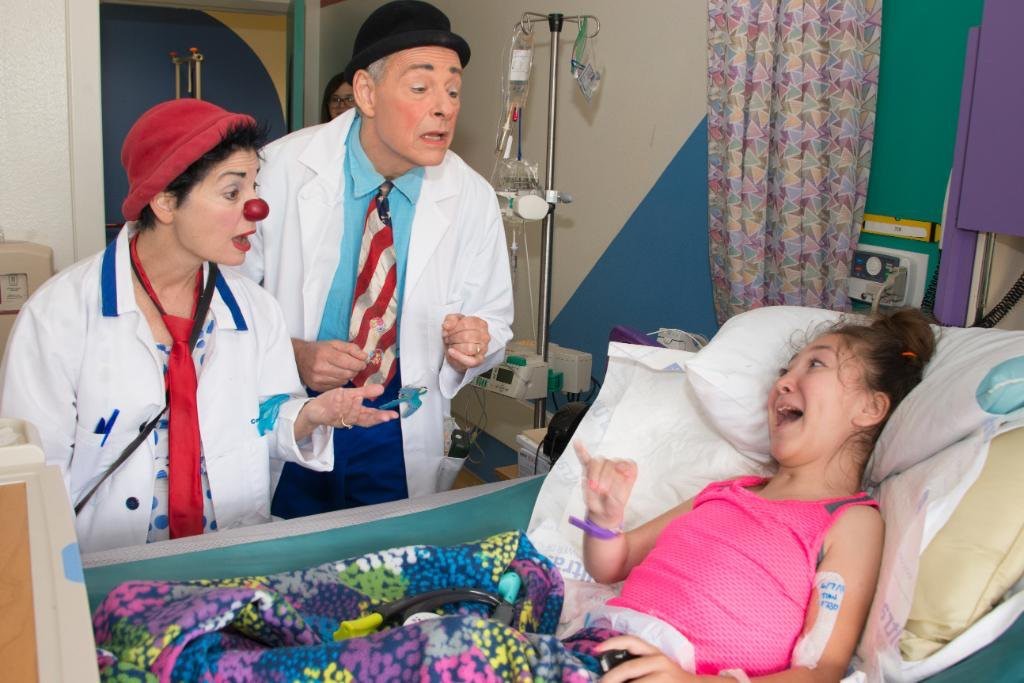 While they don’t have medical degrees, they are trained to use those clowning skills to help hospitals reduce the stress and fear patients might be feeling.

Before the spread of COVID-19 forced hospitals to restrict access, Riley and Monday were making regular visits to Cook Children’s.

The hospital staff gives the pair a roster of patients with information that might be helpful to them.

“Things that are really helpful are if they have autism or they’re blind or deaf,” Riley said. “We’d rather not know everything because then if you’re carrying around a lot of diagnoses in your head, it’s harder to find the comedy. You’re thinking about what you’re going through.”

They enter every room with just enough information, and what happens next is pure improvisation.

On one of their last visits in early March, Riley and Monday walked in on a 3-year-old boy with a developmental delay is in the middle of physical therapy.

His doctor was trying to get him to sit up.

Monday and Riley burst into song, and the boy’s eyes light up.

Dr. Ray Quigley with UT Southwestern Medical Center is one of their biggest advocates.

“I think the one word that describes it the best is real, true empathy,” Quigley said. “They can flip it and have the kid in charge. They can do that because they really understand where the kid’s coming from.”

A lot of the work is observational: Reading the room … using props … music … or physical comedy to engage with patients.

“Once they start thinking in that forward motion, where they’re helping us and telling us things,” Monday said. “That’s when we know we’ve gotten to the place that’s actually doing some therapeutic work because it has empowered them”

But, how do you do that if you can’t be in the room with them?

Cook Children’s has since restricted access to direct caregivers and medical staff.

So the clowns have turned to the Internet.

They’re working with hospitals to hold virtual visits with patients over Zoom, the free video conferencing program that’s become popular as a way to connect during the pandemic.

While the technology is new, helping kids through a crisis is not.

The pair has been tested before working for the Big Apple Circus in New York, one of the first circuses in the country to have a healthcare clowning program.

Riley remembers preparing for a show in upstate New York.

“I said, we should turn on the TV and see what’s going on. Putting my makeup on in the trailer and really asking yourself, what is my purpose now? A clown?”

Riley and Monday realized then how critical their work could be after a tragedy.

“Kids had this incredible desire to tell us what happened, and we realized that we were great listeners,” Monday said. “Healing was happening just from them telling us what happened.”

Riley hopes that they can, once again, create moments of levity for kids living through the current pandemic.

“The real reason that I’m able to keep doing it is that what comes back,” Riley said. “The energy that comes back from the kids kind of disperses any of that sadness or that negativity because they are resilient. Kids are magical, especially.”

While they can’t be there in person, Riley and Monday will keep the magic alive online.