Editor’s note: As the pandemic continues, KERA and The Dallas Morning News are collaborating to document how North Texas’ arts and culture scene is working to adapt. KERA’s Jerome Weeks traveled to Massachusetts, where Dallas Black Dance Theatre was opening its new season.

But that success nearly didn’t happen.

Melissa Young, director of the dance company, arrived at DFW Airport early on August 2. The airport was dark with thunderstorms, the terminal was jammed. American Airlines cancelled 267 flights that day, spreading delays across the country. An earlier flight with four Dallas Black dancers had managed to depart. The flight with Young and eight other dancers never took off.

“So that was a headache,” Young said.

That meant eight of the company’s 12 dancers were more or less stranded — with just 24 hours before their debut at Jacob’s Pillow.

The 89-year-old company is the longest-running international dance festival in the country, a birthplace of modern American dance. It’s hosted and trained many of our most important choreographers and companies: Bill T. Jones, Mark Morris, Martha Graham. It’s been called a “sacred place” for dance.

For the Dallas company celebrating its 45th season this year, being invited to Jacob’s Pillow was an achievement. But it took a hectic day and night of being re-routed around the country.

As the company rehearsed throughout the day on Aug. 3 — the last dancers, like Terrell Rogers, Jr, hustled in, straight from their flights.

“Here comes Terrell,” said Young. “He has his travel pillow around his neck, and he’s wheeling his suitcase, and all he did was just drop his suitcase and jump up onstage. He didn’t even warm up.”

This meant the Dallas company was performing on a dance platform unlike any they’d worked with. It juts out over a hillside, and behind the dancers are open air and the distant green mountains of the Berkshires. The wooded, 220-acre park where Jacob’s Pillow is located is the only National Historic Landmark devoted entirely to dance.

“One thing we pride ourselves on is we can pull it together like that, you know what I mean?” said Claude Alexander III, a 7-year company member. He said everyone made the necessary adjustments on the fly. That’s just how Dallas Black Dance works.

“It’s really a testament to our rehearsal process. We try to prepare for anything.”

Jacob’s Pillow director Tatge first saw the company three years ago and was struck by the group’s talent, work and legacy.

“And the other thing is that very few companies pivoted to digital as well as Dallas Black Dance Theatre did,” Tatge said. “It’s that entrepreneurial spirit.”

Dallas Black Dance director Young said she saw the COVID quarantine as an opportunity to get creative. Last fall, for example, the video of  “Bodies as Site of Faith and Protest,” had company members dancing on the City Hall Plaza and in the pavilion in Klyde Warren Park.

But these projects were more than experiments, Young insisted. They were vital — they helped keep the dancers in touch with their work, their bodies, their personal well-being. Without such workouts, Young argued, all that would decline. 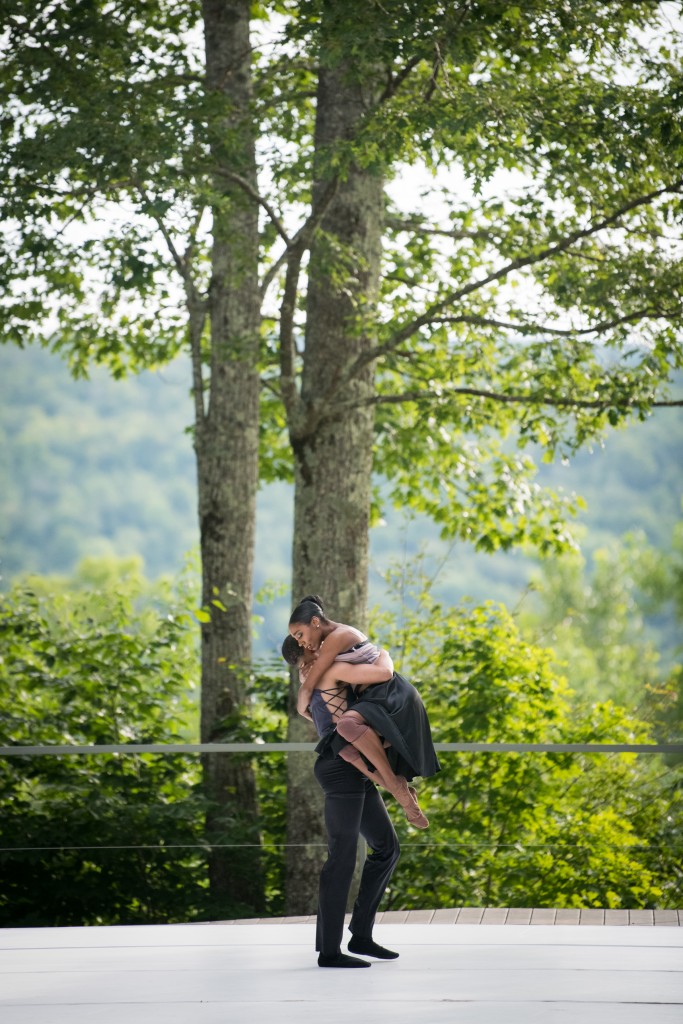 For Dallas Black Dance, performing at Jacob’s Pillow wasn’t just a chance to pirouette in the national spotlight. Performing there can have practical rewards. Theater promoters and booking agents attend the 10-week summer festival. It can lead to tour bookings.

“In my heart of hearts,” Young said,  “I hope that’s true. Being at Jacob’s Pillow, this is my analogy. When an actor is awarded an Academy Award, audiences often go, ‘Oh, it’s a newcomer on the scene!’ And that actor might say, ‘You know, no, I’ve been doing this for decades. It just happens to be the first film that I’m recognized for — at this magnitude.’

“I feel the same for us. We’ve been doing the work — whether it’s a small performance at a cafeteria, in a school or on the biggest stage — and we’re consistent and genuine. So this is the moment I hope and pray that will bring us visibility and will actually turn into more collaborations.”

Dallas Black Dance’s path to Jacob’s Pillow may have been an extended cliffhanger. But Tatge, the festival director, says their coming to the secluded Massachusetts center also felt something like fate.

Jacob’s Pillow now has an endowment to commission a new work each season. For its first world premiere, Tatge chose renowned New York choreographer Darrell Grand Moultrie. He staged his piece, Like Water, to the nuevo flamenco music of Rodrigo y Gabriela, and it made for a firecracker of a finale.

It turns out Moultrie has previously choreographed for Beyoncé, the American Ballet Theater — and Dallas Black Dance.

“So it seemed a perfect match,” said Tatge. “And then when I found out it was their 45th anniversary, I thought, ‘Oh, this – this must happen.’”

Anne Hennessey was delighted it did. She lives in Massachusetts, she’s attended a lot of shows at Jacob’s Pillow. The week before seeing Dallas Black Dance, she watched the Olympic games — and couldn’t help but compare the two.

“And after this past year, it was nice to see such joy.”

A version of this story aired on KERA and appears on dallasnews.com. It also will be published in The News’ Sunday Arts & Life section.