Skip Navigation
Home > ArtandSeek.net > Dallas Could Become A Park Oasis … If These 6 Projects Ever Get Finished

Over the years, Dallas has taken knocks for its love of asphalt and its lack of green space. At one point, the city even earned the title of “The Worst Outdoor City In America.”

That may be an exaggeration, but Dallas has yet to reach its full potential as a park-friendly city. According to The Trust For Public Land, Dallas’ park system ranks at No. 50 among the 100 most populated cities in the United States. Only 7% of city land is used for parks and recreation. The national median is 15%.

Residents flock to staple parks like White Rock Lake and Klyde Warren Park, but there are pockets of the city, particularly in southern Dallas, where residents lack public green space within a walking distance from home. The report from The Trust For Public Land says 73% of residents live within walking distance of a park, but the group includes private green space in that calculation.

Here are six ambitious projects that could improve access to public parks for all of Dallas. Some have been in development for decades, while others are nearing completion. But, all of them could help transform Dallas into a paradise of parks, if they’re ever completed.

Arguably the most precarious project on this list, the Harold Simmons Park is the first major project to come out of the Trinity River Corridor Plan. This grand vision for a massive green space within the Trinity River floodway dates back to a 1998 bond election, where Dallas residents voted to spend $264 million on altering the floodway with future levees, recreational facilities and road projects. 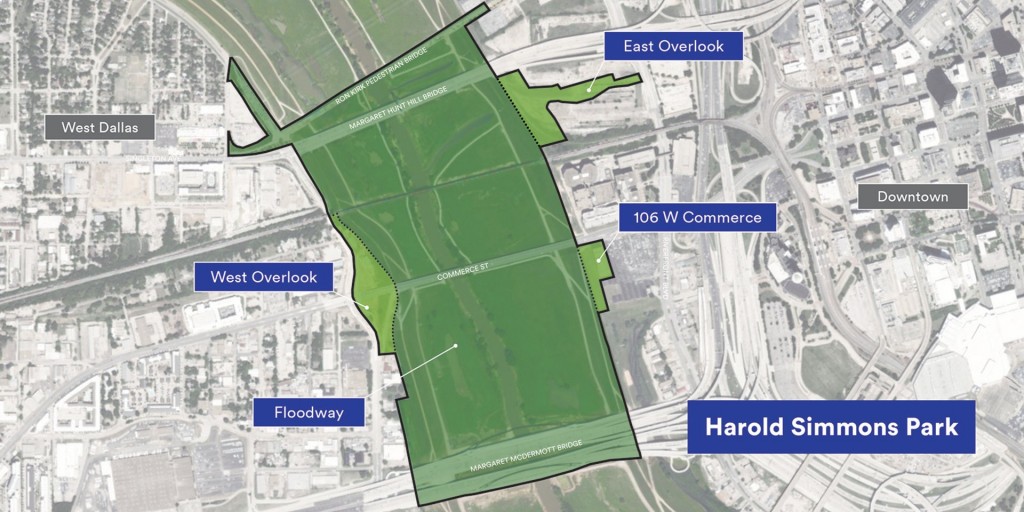 In 2016, Annette Simmons, widow of Dallas billionaire Harold Simmons, pledged $50 million to the park effort. The Trinity Park Conservancy, the nonprofit tasked with building it, has been inching closer toward the promise of a Trinity green space ever since.

The proposed Harold Simmons Park will span 200 acres framed by the Ron Kirk Bridge to the north and the Margaret McDermott Bridge to the south. It would connect West Dallas, Oak Cliff and Downtown. There are also plans to incorporate overlook parks on the levees. The conservancy has already acquired the old Jesse R. Dawson State Jail, which it plans to transform into one of those community spaces looking out over the Trinity.

But, there’s a big wrench in the works. The U.S. Army Corps of Engineers will soon begin work on ambitious floodway control projects in the Trinity, D Magazine reported in August. Plans for the future park are pretty much on hold until that work is completed, and that means it could be another decade before Dallas residents can finally step foot in Harold Simmons Park.

This next project is more of a sure thing. Similar in concept to Klyde Warren Park, the Southern Gateway deck park will bridge the gap in Oak Cliff created by Interstate 35E.

The public park, which will span the highway from Ewing and Marsalis Avenues, will include a stage and pavilion, a children’s playground and a community building. It’ll also include pedestrian arteries connecting it to the nearby Dallas Zoo. 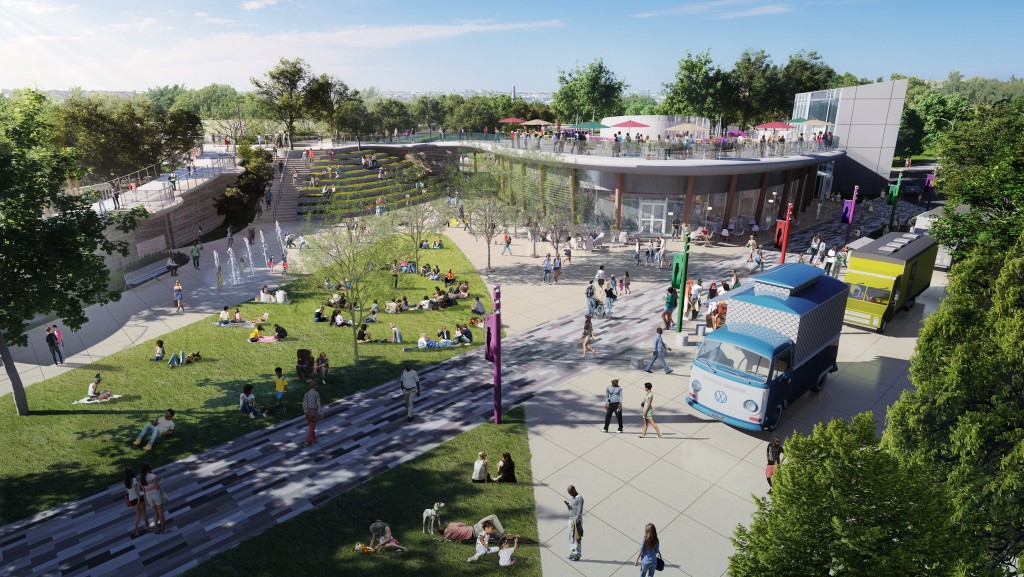 The Southern Gateway Park will sit on a deck build above I-35E near the Dallas Zoo.

When it was built in the 1950s, the highway severed communities east of I-35E from the growth happening in Oak Cliff. In an interview with KERA, April Allen, president of the Southern Gateway Public Green Foundation, said the park is “a catalytic investment in infrastructure,” which will help reunite the impacted communities.

Last October, the Dallas City Council approved a new master plan for Fair Park, which promises to make the home of the State Fair of Texas a lot more lush. 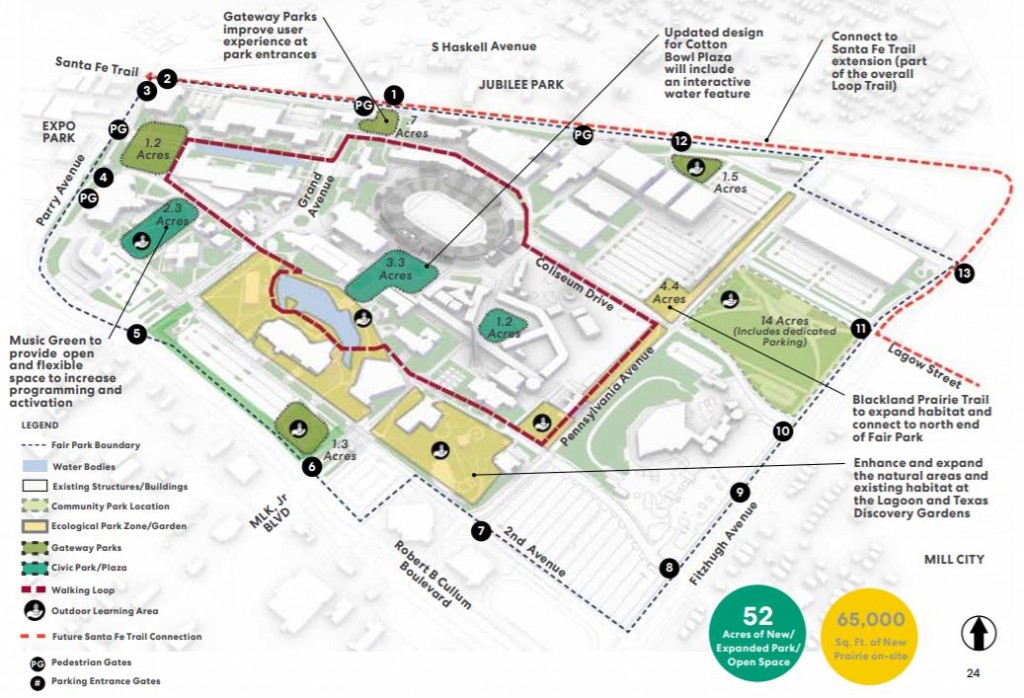 While the entire master plan could take 20 years to fully execute, the first phase includes the construction of a 14-acre community park on the eastern side of the fairgrounds. Phase 1 is expected to take five years. It will add over 52 acres of new or expanded green space throughout Fair Park, including a grassy plaza that will help connect Music Hall to the African American Museum and the Hall of Religion.

Like the Southern Gateway, the improvements planned for Fair Park also help redress long-standing damage done to neighboring communities of color. In the 1960s the City of Dallas uprooted homeowners and businesses in the area to build parking lots, Dallas Morning News architecture critic Mark Lamster told KERA. Decades later, that asphalt will be ripped up in exchange for grassy lawns, trees — and hopefully the first inkling of a community restored.

Further down south in Dallas, a cluster of parks and trails are in development that would make Five Mile Creek — a large watershed full of blackland prairie, creeks and old-growth forest — more accessible to local residents. 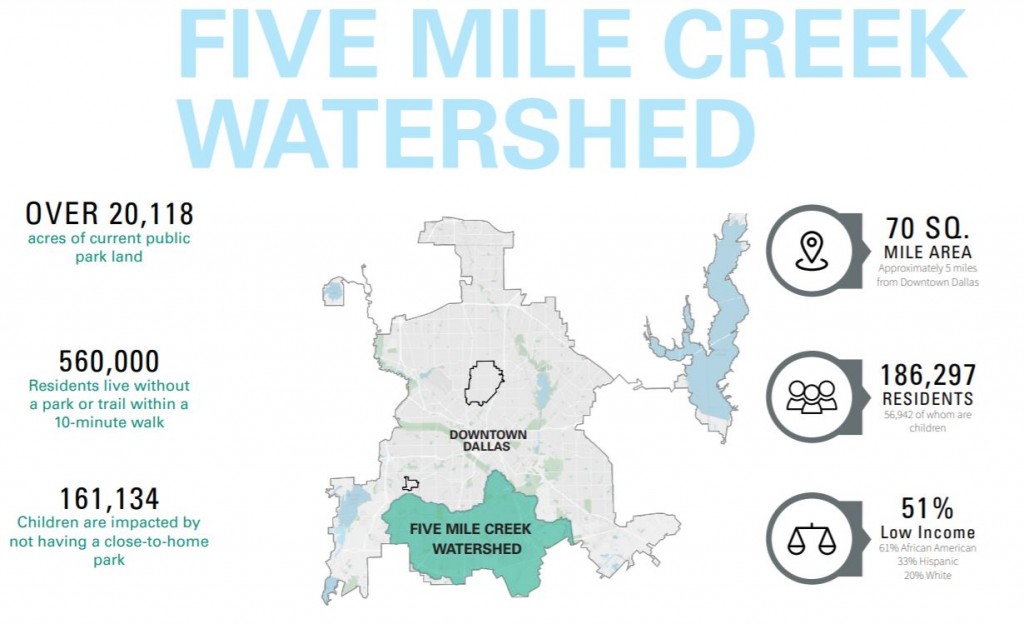 In February, the City Council agreed to acquire 82 acres of forest land on the banks of Woody Branch, a section of the Five Mile Creek greenbelt near the Glen Oaks neighborhood. The city is working with the Trust for Public Land to build a big community park there.

That land is part of an even larger master plan. It includes a network of over 23 miles of new trails and four new parks (including the future Woody Branch park) scattered across Five Mile Creek. The Trust for Public Land says the 1.8-acre Alice Branch Creek Park near South Oak Cliff High School should be done by this year. The 40.4-acre Judge Charles R. Rose Community Park should be completed by 2022.

Downtown Dallas has been taking baby steps toward greenification over the past 20 years, and there are several park projects still on the horizon. 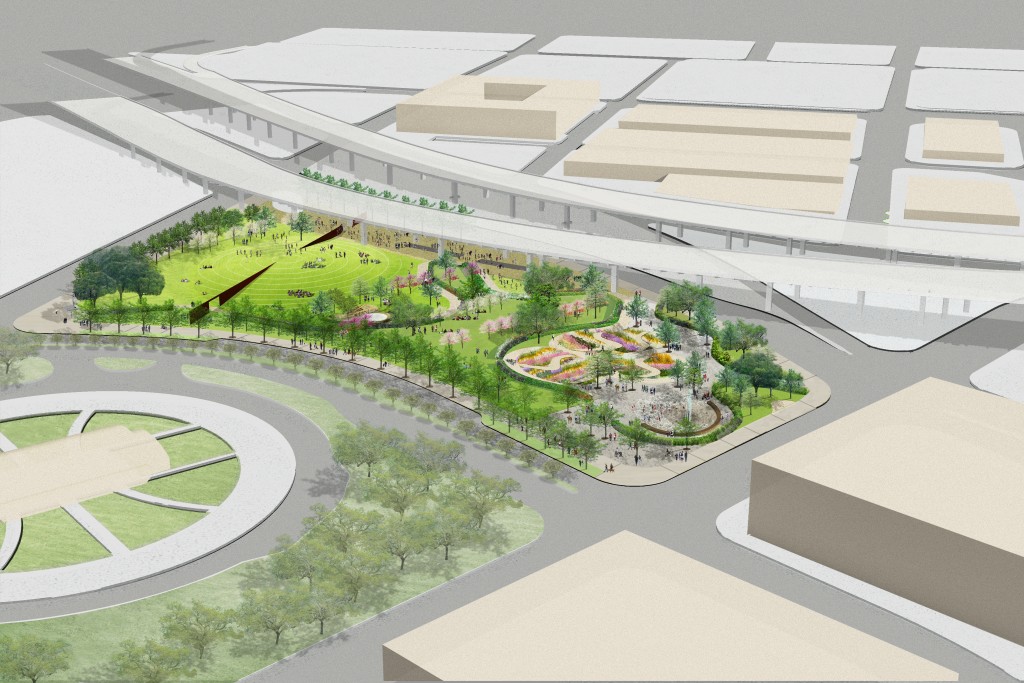 The city, in conjunction with the nonprofit Parks for Downtown Dallas, is working on new additions. Carpenter Park, located between DART’s East Transfer Station and Central Expressway, should be open by summer 2022. The 8.7-acre park will help restore some connectivity between Downtown and Deep Ellum, which have long been severed by U.S.-75.

The final piece of the master plan, Harwood Park, is set to break ground later this month. It will be located near the Farmer’s Market District, and is slated to open by mid-2023.

OK, this last one probably won’t be very green, but it will be totally sick.

The city’s first public, poured-in skatepark is in the works. In 2017, Dallas voters approved a nearly $262 million parks bond, which included $4 million for a concrete skatepark. The Parks and Recreation Department has already selected the design team (Team Pain) and the location (Bachman Lake). It could be anywhere from 30,000 to 75,000 square feet, according to the nonprofit Skate Parks For Dallas.

There is only one existing public skatepark in Dallas, but the St. Francis Skatepark in East Dallas uses modular metal ramps that the nonprofit says are worn and damaged. To find smooth concrete parks, skaters must head out to Arlington or Frisco.

The nonprofit has been working with the city and Dallas Parks Foundation to get the wheels rolling on the project. Skate Parks For Dallas co-founder Clinton Haley told Centraltrack in July that Dallas needs a public skatepark “where kids aren’t at risk of losing their park and they can access it any day, at any time.”

There are no set plans, but a groundbreaking could come as soon as 2022.