This is our profile of Anthony from 2015 — when healthy once again, he lead a superstar benefit concert at the Meyerson Symphony Center featuring such players as Doc Severinsen and Cuban jazz great Arturo Sandoval. It was a benefit – and it was Ryan’s way of saying thanks to all the people who’d helped him during his catastrophic illness.

Playing trumpet more or less saved the life of Ryan Anthony, the principal trumpeter for the Dallas Symphony. It helped warn him something was wrong; it turned out that something was cancer. KERA’s Jerome Weeks reports, Monday through Wednesday [in March 2015], nearly 20 of the country’s finest trumpeters will be in Dallas for a three-day cancer research benefit created by Anthony called Cancer Blows.

One of those trumpeters is Ryan Anthony, principal trumpet for the DSO. He’s lucky to be playing in this rehearsal. In fact, he’s lucky to be alive. Two and a half years ago, playing the trumpet began to hurt. 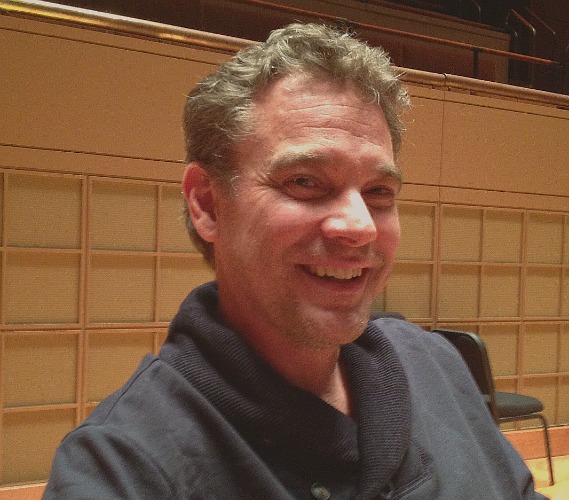 “Every time I would take a really deep breath or playing something where it would take a lot of pressure,” he recalls,”I would feel these shooting pains. So I thought I’d broken a rib somehow.” The pains would go away, but then they’d come back harder, more often, more quickly.

Doctors took dozens of x-rays and blood tests. He had no broken bones, no torn muscles or tendons, no signs of lung cancer. There was this other cancer, but it was a near-impossibility. So they didn’t test for it. Less than 1 percent of multiple myeloma cases are people younger than 40. Anthony was 42.

“But we kept asking,” he says, “and they finally said, ‘Well, OK, we’ll test just so you can know it’s not cancer.’ And it came back positive.”

Multiple myeloma is a bone marrow cancer. The white blood cells turn into lesions in the bones, and Anthony had lesions from his skull to his feet. Not long ago – before stem-cell implants – he would have been given two-to-three years to live.

What did he feel when they said he had cancer — an incurable cancer?

He takes a deep breath. “Just disbelief. You know, it’s just kind of hard to realize that’s what it is. And at the time it was diagnosed, it was severe enough, I mean, literally, we started treatments that day.”

The doctors at Baylor’s Cancer Center used chemotherapy basically to wipe out Anthony’s immune system. Then they used stem cell implants to build him a new one. While he was going through all this, Anthony was visited by friends and colleagues, fellow trumpet players. Gathered like that, the idea often came up: Whatever happens, we all ought to get together again for a big concert.

But whose idea was it to call it ‘Cancer Blows’?

Anthony laughs. ” You know what, the name is actually my wife’s, she came up with it. And we laughed and that was sort of the running joke.” 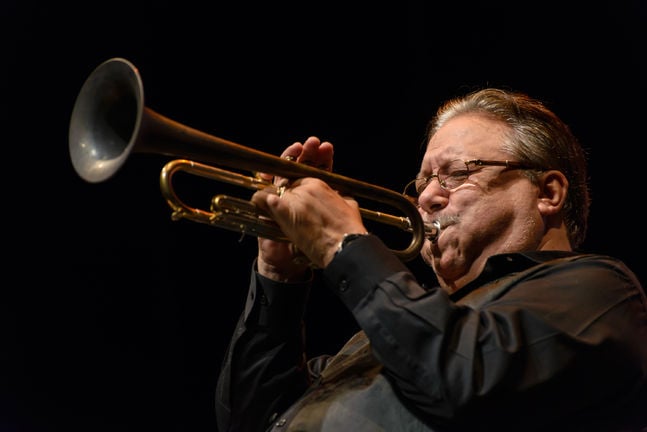 Cancer Blows became more than a single benefit concert Wednesday at the Meyerson featuring Doc Severinsen and Cuban jazz great Arturo Sandoval. Nearly 20 trumpeters are coming to town including players with the New York Philharmonic and the Chicago Symphony. So they naturally started coming up with workshops and master classes and a smaller concert Monday night at the City Performance Hall.

Tom Booth plays fourth trumpet in the DSO. He was one of Anthony’s colleagues who filled in for him while he was undergoing the chemo and implants. Booth says, Anthony surprised them.

“He came back much faster than anybody expected, and came back sounding fabulous. You forget that he’s playing the trumpet sometimes. It’s just a great voice. It’s just pure music.”

It wasn’t simply co-workers and musician-friends who helped. Now in remission, Anthony gets a little choked up when he recalls his Sunnyvale neighbors holding a blood drive for him. In Wednesday’s concert, he’s reserved two solos for himself. One of them has a special meaning. It’s called Gabriel’s Oboe. It’s the main theme from composer Ennio Morricone’s Oscar-nominated score for the 1986 movie, The Mission — and it’s become a tremendously popular piece, not just for the oboe. It’s been transcribed for the human voice, for guitar, for cellos, for multiple horns. But the trumpet and orchestral version that Anthony plays has a particularly melancholy grandeur to it.

“It’s become one of my favorite tunes the past few years,” and playing it Wednesday, he says, “that’ll be a moment, if nothing else, to thank all those who’ve been so supportive.”

The full release from the Dallas Symphony:

The Dallas Symphony Orchestra is deeply saddened by the passing of Principal Trumpet Emeritus and great friend Ryan Anthony. Ryan was an incredible leader and a musician beyond compare. Music was the center of his life, and that was felt by everyone around him. He was revered by brass players for his talent, and he was loved by his colleagues for his friendship, joy and exuberance.

Ryan Anthony joined the DSO as guest principal trumpet in 2004, became Interim Principal Trumpet in 2006 and assumed the Diane & Hal Brierley Principal Trumpet Chair in 2008. His clarion notes rang through the Meyerson to open Mahler’s Fifth Symphony at the start of Jaap van Zweden’s tenure as Music Director, a moment he remembered fondly. Anthony was a leader of the orchestra as soon as he arrived in Dallas, as a unifying voice, a collaborative spirit, and as an anchor of sound of the brass section. His commitment to music making at the highest level was palpable, and his devotion was evident to every player.

Beyond the stage, Ryan helped to shape the future of the DSO. He served as a Dallas Symphony Association Governor by Virtue of Position since the 2012/13 Season. He also was among the principal players who served on the search committee for Music Director Fabio Luisi. In recognition of his incredible contributions to the orchestra, Ryan Anthony was named Principal Trumpet Emeritus in June 2019.

In 2012, he was diagnosed with a rare cancer of the blood and bone marrow, multiple myeloma. Ryan fought the disease for many years, and we were awed by his resilience and strength. He seemed unstoppable when he returned to work a few months after receiving a stem cell transplant. Following his diagnosis, he dedicated his performances and his time to using music to promote cancer research. The Ryan Anthony Foundation was founded in 2014. In 2015, the Dallas Symphony hosted Cancer Blows, the signature concert event of the foundation and an important vehicle for musicians and audiences to unite in finding a cure.

“I will miss his friendship and his wise counsel,” said Kim Noltemy, Ross Perot President & CEO. “It is rare to meet a person with all of Ryan’s gifts: passion, tenacity, diplomacy, humanity and an immeasurable love of music. He was much-loved and an inspiration to so many of us. His legacy will be felt forever at the Dallas Symphony. We mourn alongside his wonderful wife Niki and his two children, who will always be part of the DSO family.”