Kendra Greene is a Dallas writer who also makes art books and prints.

If you’re interested in Greene’s work, here are a couple events you can attend: A Kendra Greene: TOXIC at The Reading Room or Inner Moonlight: Kendra Greene & Matthew Klane at The Wild Detectives.

Lately, she’s traveled the country to visit libraries that house a rare book called “Shadows From the Walls Of Death.” Her research informs a forthcoming book of essays, and an art show that opens this weekend. In State of the Arts, she tells KERA’s Anne Bothwell that a piece of history sparked her interest in how and why we collect dangerous things. 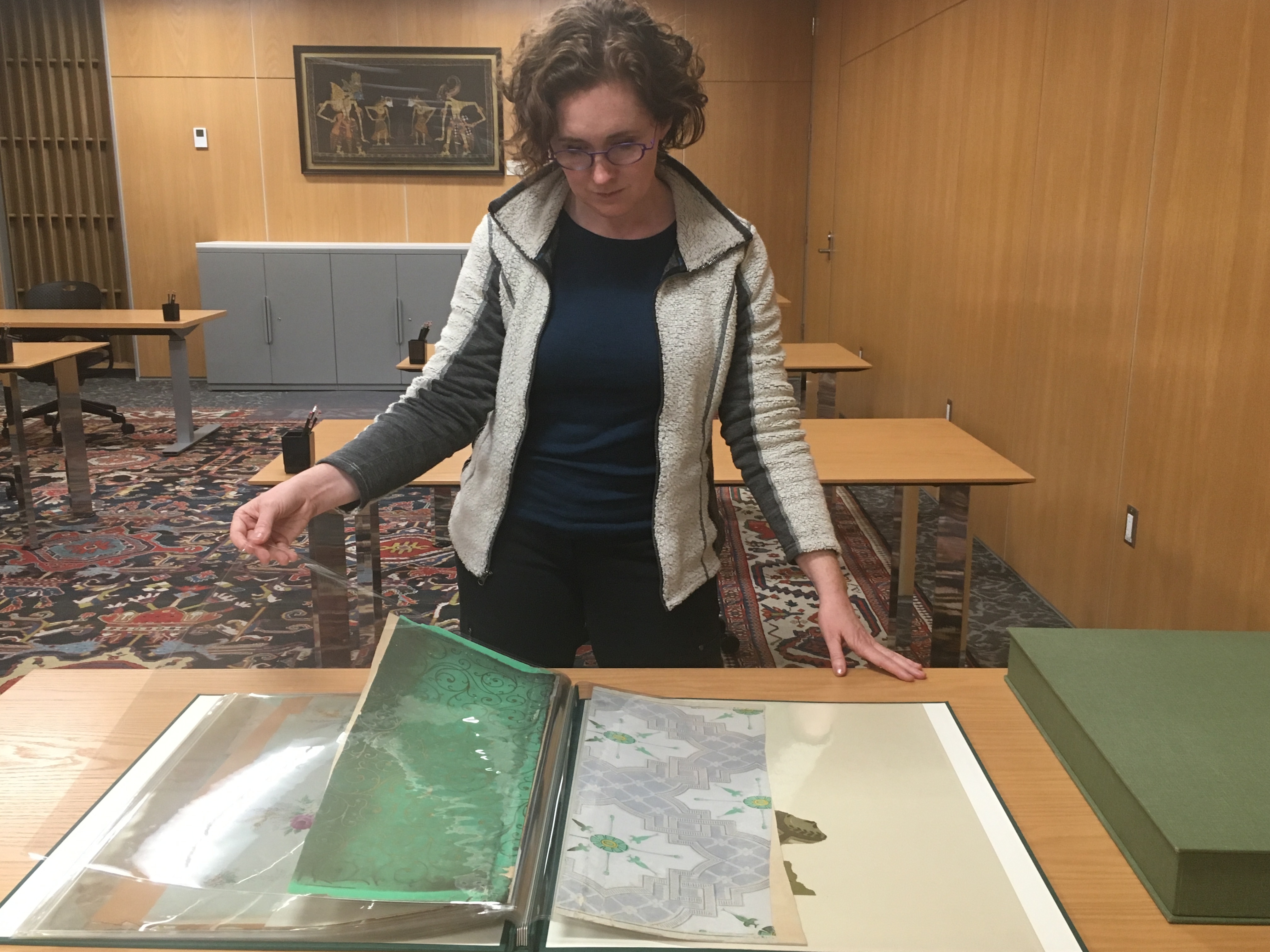 KG Thank you, it’s a pleasure to be here, Anne.

Your show was inspired by a book of sorts, called “Shadows from the Walls of Death,” and it was put together in 1874, and it sounds like a gothic novel, but it’s actually a collection of wallpaper. 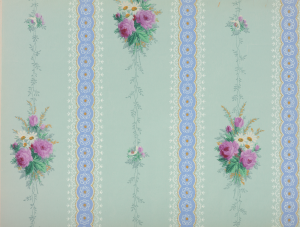 KGAs a person who makes titles, I’m so envious that the Michigan Department of Health came up with this one first, and it’s, in fact, just one printed title page, a three-column text, and then the whole rest of the book, 86 leaves of, confirmed in the lab, arsenical wallpaper.

Right, I think that’s the important part. The wallpaper is poisonous. Arsenic was everywhere.

KG Absolutely ubiquitous. The Victorians surrounded themselves with arsenic. It was in absolutely everything, but particularly anything that needed to be a beautiful color. Arsenic can make things brighter and last longer in their color, but the arsenical greens are particularly famous.

In the 1880s, the American Medical Association finds that 54 to 65% of wallpaper in the U.S. has arsenic in it, and a third of that should be considered at toxic levels. In the 1870s, Americans are buying 57 million rolls of wallpaper a year, or as they say at the time, enough wallpaper to girdle the Earth.

And it wasn’t just in wallpaper, right?

KG Well, and this is what’s amazing: people that knew arsenic as inheritance powder, as the leading cause of homicide, and the second leading cause of suicide of the era. We talk about Paris green, one of the most famous colors in art history, and it’s not named because it was used by Renoir or Monet, it’s named because of the amounts of it, the sheer quantity heaped in the Paris sewers to kill the Paris rats.

So, people knew it was poisonous. 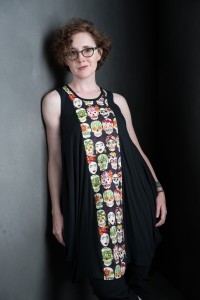 KG No question. And yet, they were also taking it in wafers for their complexion. It was in wax candles being burned. It was kept in the kitchen and sometimes confused with other white powders, like sugar.

Enter one Dr. R.C. Kedzie, and he goes on a crusade to let people know about the dangers of arsenic in wallpaper.

KG He visits three cities in Michigan, gets wallpaper that would be available to any consumer, brings it back, tests it in the lab, and sure enough, there’s arsenic constantly. And then when he decides to make this book, it talks about how to test for arsenic, why this is such a threat, it has headings like “the danger is real,” and “shall we poison our homes?”

And then he sends it to 100 public libraries.

KG It comes accompanied by a letter from the secretary, that in one sentence will ask the library to have it prominently displayed, and in the next point out that propriety suggests, given the poisonous nature of the papers, not to let it be handled by children. It really seems sort of like a stunt. The showmanship of it is kind of amazing. This is the thing that nobody can miss, even the librarian throws it away immediately. You know that librarian is going to tell everyone in town about what happened.

That she or he got a book full of poisonous wallpaper. 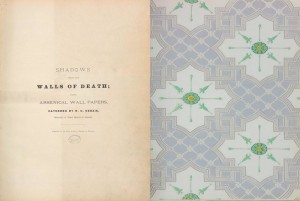 The title page for Shadows from the Walls of Death, and a sheet of wallpaper.
Photo: NATIONAL LIBRARY OF MEDICINE/ PUBLIC DOMAIN

KG From the state board of health. But to make this book is really amazing, right. It’s not just a dangerous thing, there are lots of dangerous things we hold onto. But this book was made specifically because it would be dangerous. That quality is the reason it exists at all. And then it was made specifically to be sent to people who don’t just have a duty to educate the public, they have a mandate to hold onto things.

Looking back, it’s easy to laugh at, oh, these folks who were so naive about arsenic in their environment. Do you see any parallels to today?

KG Well, I totally agree. I think the first reaction is: “How droll, those Victorians!” But I’ve never lived in an apartment where I didn’t have to sign a lead paint waiver, right? We know that there’s asbestos around us, and now we have to think more and more about what plastics are doing to the Earth.

How did you come across this book, and learn about this story?

KG I used to be a collections manager for a museum of photography, and that’s when I first started learning that there were things that could explode in collections. But over time I would start to notice all the sorts of dangerous things that we hold onto, because it’s just more dangerous not to, right? To forget, to censor, to deny, carries its own risks. So I was imagining all the things that I would write about for [the] next book, for the poison cabinet, thinking about dangerous things.

This is a book that you’re working on now. 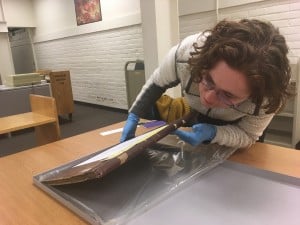 KG Correct. And like so many things, a friend posted an article from the internet. Atlas Obscura had just done a piece on this particular book, and it was perfect, right? That it’s so literal in thinking about danger. It seems safely removed because it’s in the past, and arsenic, it’s just fascinating. It’s so undeniably not a good idea.

And do you know how that work was received?

KG There’s no information on this at this point. The best I think we can do is think about the fact that there were a hundred books to start with, and at this point, we know where four of them still are.

And you went on a search for those books, right?

KG I’ve been visiting all of the ones that can be found. So I’ve been out to Michigan twice, they’ve got three of the books. The National Library of Medicine was conserving theirs when I was in D.C., and I had a whole fellowship last summer in Harvard to think about their copy, which it turns out, isn’t even one of these books. It’s a pamphlet that accompanied the book. It’s the exact same text, but none of the wallpaper. So it suggests that this book was designed from the beginning for you to be able to separate the important information from the dangerous object.

And the important information was a warning about the danger of arsenic. How did you go from discovering this book and researching it, to turning it into an art exhibition? 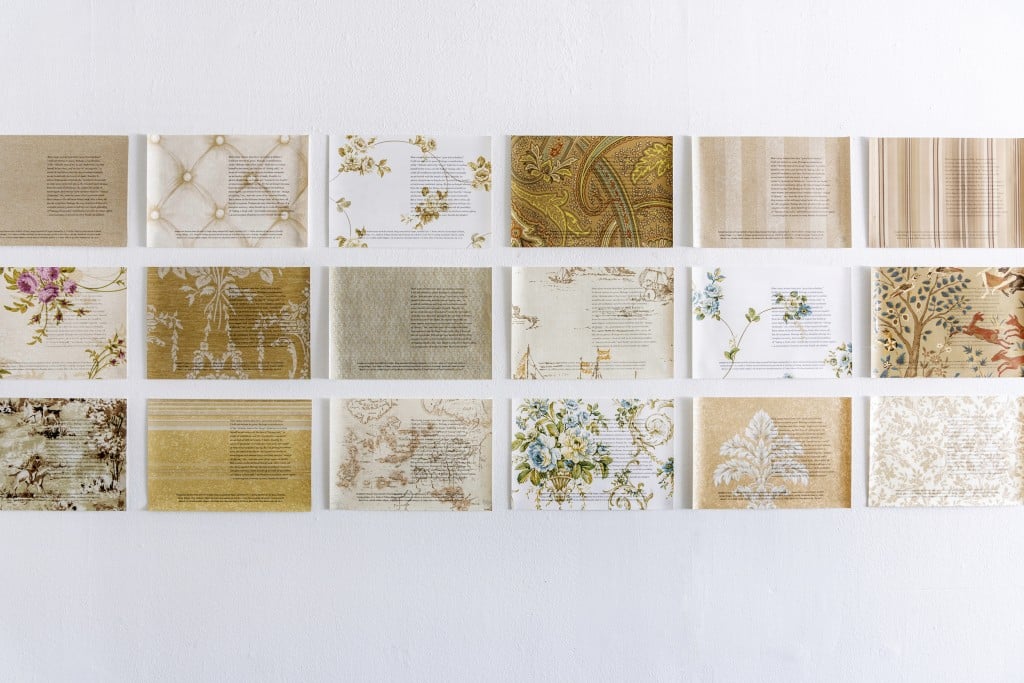 KG When I was doing my M.F.A. in nonfiction, I was lucky enough to also start work at the center for the book. So, my essays and my printed material have always been sort of related, so when I realized I was researching a book of poisoned wallpaper, that I was going to be writing about it, it seemed so natural, just necessary, for it to be in broadside form. And broadsides are an old way of doing things, it’s text and image on paper, and the idea of having this language up on the wall again just seemed like a perfect fit.

And you’ve actually put the language, it’s the text from the pamphlet, but it’s been printed on actual wallpaper.

KG Print lead type, set by hand, ink from the flammables cabinet, and locally sourced wallpaper in honor of the original way that the paper was sourced. One can’t fit the whole text very easily, but I think the most compelling passage is this sort of out-of-character for the whole thing, but this very writerly passage that shifts to a feminine pronoun, and talks about one hypothetical person’s descent into illness.

How did you decide which wallpaper to use? You’re not using poisonous wallpaper, we should say. 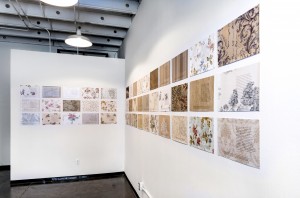 KG Well, it hasn’t been proven to be poisonous. Who knows what we’re doing with things today? But what I wanted to do was get wallpaper that was close to the source, thinking that when Robert Kedzie went looking for wallpaper, he didn’t go any further than 80 miles. So I was in Cambridge at the time, and sourced wallpaper out of Providence.

You seem more in this project than just revealing a fascinating part of history.

KG Absolutely. I’ve been thinking a lot about the German word giftschrank, literally “the poison cabinet,” which is something that you find at the chemist, or in the pharmacy, but it is also literally a part of the library. There are things that we need access to, even though the contents of them scare us. So, this is an example of things that are literally, physically immediately toxic. There are other things that make us afraid and worried for each other.

KG I think about the Jim Crow Museum of Racist Memorabilia, also in Michigan. I think about the way that the Kinsey Institute, and the Velveteria Velvet Painting Museum both sort of us the same language to talk about, someone dies, someone who loves them has to figure out what to do with their things, and when they encounter something that they cannot live with, they’ll take the trouble to make sure that it gets to someone who can value it. And then, of course, there are objects that end up at institutions where they will get much better care than anything we own privately and will be made available to much bigger audiences.

Almost all of your work really starts with your interest in museums. Where does that come from?

KG I think there are a couple of answers to that. I think museums are story-telling institutions at their hearts, and while I was working in museums, it used to really strike me how they didn’t, they hardly even seemed to notice that they were generating their own stories. And of course, they were. They were dealing with the public, the whole art of collection is trying to resist entropy, and that was always going to be a losing battle. The fact that we keep the material and intellectual history of the whole world in a few pockets and institutions, that we collected by a few, often eccentric volunteers, used to really worry me. It was such an interesting enterprise, that museums were embarked upon, but the more time that I spend with them, the more I realize that there’s a bigger effort at play. What we keep isn’t just about makers or collectors, it’s also about the public and who needs it, and I feel a lot better now. It doesn’t seem as capricious to me, why we have the things we have.

You wear so many hats. You write nonfiction, you make prints, you do readings, you make art books, you teach, you even volunteer at KERA, how do you balance all of this?

KG Well, I think that if we’re really lucky, we have a chance to make enough things where we see that everything was actually connected. It was all part of one bigger thing the whole time.

Kendra Greene, thank you so much for coming by.

KG Oh, Anne, it’s been a total pleasure. Thank you.