The moment has finally arrived for the great American artist Norman Lewis. More than 35 years after his death, the painter who broadened the borders of abstract painting and of black American art is getting his time in the spotlight.

Lewis’ work is being scooped up by art enthusiasts and expectations for prices of his paintings are being shattered. Many of the country’s most prestigious museums are collecting him and the first major retrospective of Lewis’ work is making its way across the country; it’s latest stop is Amon Carter Museum of American Art. 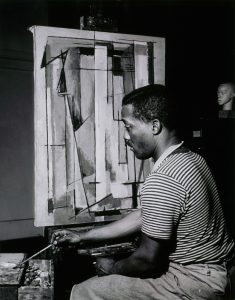 The exhibition, “Procession: The Art of Norman Lewis,” includes 70 paintings and works on paper from the early 1930s through the late 1970s.  The “procession” in the retrospective’s title refers to a thread throughout Lewis’ work – the ritual of procession, says the exhibit’s curator, Ruth Fine. Processions could be celebratory, like a New Orleans second line, or terrifying, like a Ku Klux Klan march, says Fine. Lewis evokes both ends of that emotional spectrum in works such as “Title Unknown (March on Washington),” “Title Unknown (Alabama)” and “Aurora Borealis.” 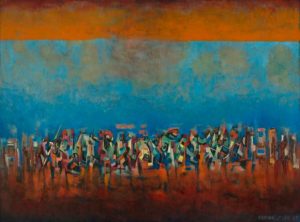 Lewis played a critical role in the Harlem arts community and the abstract expressionist movement. Though his work was created during turbulent times in American history, Lewis didn’t always depict a view from the street. His aesthetic was more like  that of fellow abstract expressionists.  An ardent political activist, Lewis believed that more can be done away from the canvas than on it. When Lewis did take on topics of the time, like racism, he tried to reflect the feelings of intimidation, fear and frenzy that many felt.  In Lewis’ untitled painting known as “Alabama,” the hood of a Klansman pops out among a mass of black and white strokes (Below). 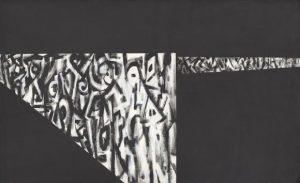 Despite Lewis’ skill and ability to integrate social issues with abstraction, he was aware it might take decades after his death before his work would be celebrated, his daughter, Tarin Fuller, told The New York Times . “He said to us, ‘I think it’s going to take about 30 years, maybe 40, before people stop caring whether I’m black and just pay attention to the work,’ ” says Fuller. And Lewis was right. 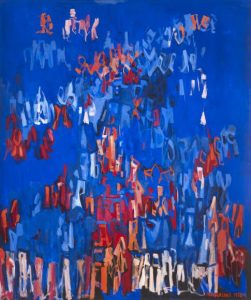 Lewis was never one to complain about his status in the arts world, but that doesn’t mean that he didn’t have to deal with being left out of art shows he belonged in. Even when he was invited, he didn’t always get the respect he deserved. “He didn’t get the same commercial success of his peers,” says Nigel Freeman, a specialist in African-American art. Freeman was featured in a CBS Sunday Morning feature about Norman Lewis and he says Lewis was in shows with Willem de Kooning and Jackson Pollack, but that he would be often ignored. Lewis was also ignored or left out of shows that featured black artist, says Fine.

“He was too abstract. He wasn’t fitting the picture that people wanted to tell about what black art was. So he got it from both sides,” says Fine.

Lewis’ art has become popular at a time when many American museums are rewriting the history of 20th-century art to include black artists in a more meaningful way. For example, the Museum of Fine Arts Boston only had three paintings by African-American artist back in 2000, but now holds one of the most significant collections of art by African Americans in the nation, including works by almost every major African-American artist working during the past century and a half. On a smaller scale and closer to home, Dallas Museum of Art acquired work by artist Frank Bowling. Bowling, like Lewis, had to wait decades for the respect he deserved. We’re beginning to see less tokenism. Though the revolution isn’t happening as fast as some might prefer.