Art&Seek is highlighting new music from North Texas every Thursday. Click above to hear me talk with Shawn Magill and Joey Noga from Dallas band Secrecies for our Music Minute, which airs on KERA FM and KXT 91.7. For more North Texas music, tune in to the KXT Local Show at 7 p.m. on Thursdays. And tell us what you’ve been listening to on Facebook, Instagram or @artandseek on Twitter. 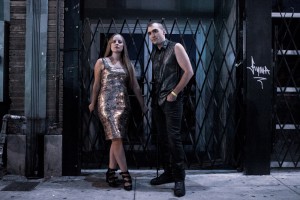 Shawn Magill grew up hearing a certain story about her great-great-grandmother. The grandmother’s husband died and, years later, she remarried her deceased husband’s brother. Magill has always wondered if there was more to the story.

“I always had this idea that there was this love triangle all along,” Magill said. “It’s like this love that’s there but can’t be acted on…”

Magill and her Secrecies bandmate Joey Noga built upon that idea for the song, “Far Away So Close”. The song was first released in 2019 as part of Secrecies self-titled debut album, and now the duo has decided to release the original recording. The song took on a different meaning after the pandemic.

“We felt like it was a great time to rerelease the song because it has so many different meanings and ‘Far Away So Close’ is kind of how I feel every day,” Magill said. “I feel really far away from everyone, but because of all the social media and internet interactions we are actually now much closer.”

“Far Away So Close” was one of three songs that Magill and Noga originally recorded shortly after meeting at a Cashmere Cat concert at Club Dada in Deep Ellum about four years ago. Magill said that the two ended up in the same dancing area and met on the “offbeat”.

“Everyone else was dancing wrong,” Noga said. “We figured it out and we were like, hey, there’s something to this maybe, and then we became friends pretty quickly.” 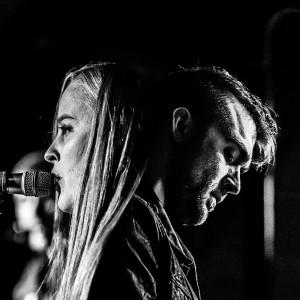 Magill is a classically trained pianist and composer (She used to be in the band Home by Hovercraft and she co-composed the score for Theatre Three’s On the Eve in 2014.) Noga plays bass, drums, and guitar. The two not only bonded over their off-beat dancing, but also their love of “synths, drum machines, and fat bass lines”.

“It’s been fun to explore the synth and electronic sensibilities with Shawn,” Noga said. “Coming from a drummer and rock band background, it’s been a really welcome transition for me; kind of like it’s been for Shawn going from classical music to rock-and-roll type stuff.”

“Far Away So Close” is accompanied by a music video that features model Ashley Baxter swimming alone in the ocean. The footage was shot by videographer Jeremy McKane and edited by Magill. The open space and depth match the full open sound of the song, while the imagery of Baxter’s isolation matches the theme of the song.

“It’s like you’re all by yourself but at the same time you’re not because you’re surrounded by all this beauty and dolphins,” Magill said. “It’s the ability to find that much beauty in solace, I think is what that video means.”

Secrecies’ last show was performed at Tradewinds (RIP) in March of last year, but they hope to perform again when it’s safe. Follow along with Secrecies journey (and watch for releases from their upcoming second album!) on Facebook, Instagram, Spotify, Twitter, and the band website.