Skip Navigation
Home > ArtandSeek.net > Filling Lyndon Johnson’s Boots In ‘All The Way’ At The DTC 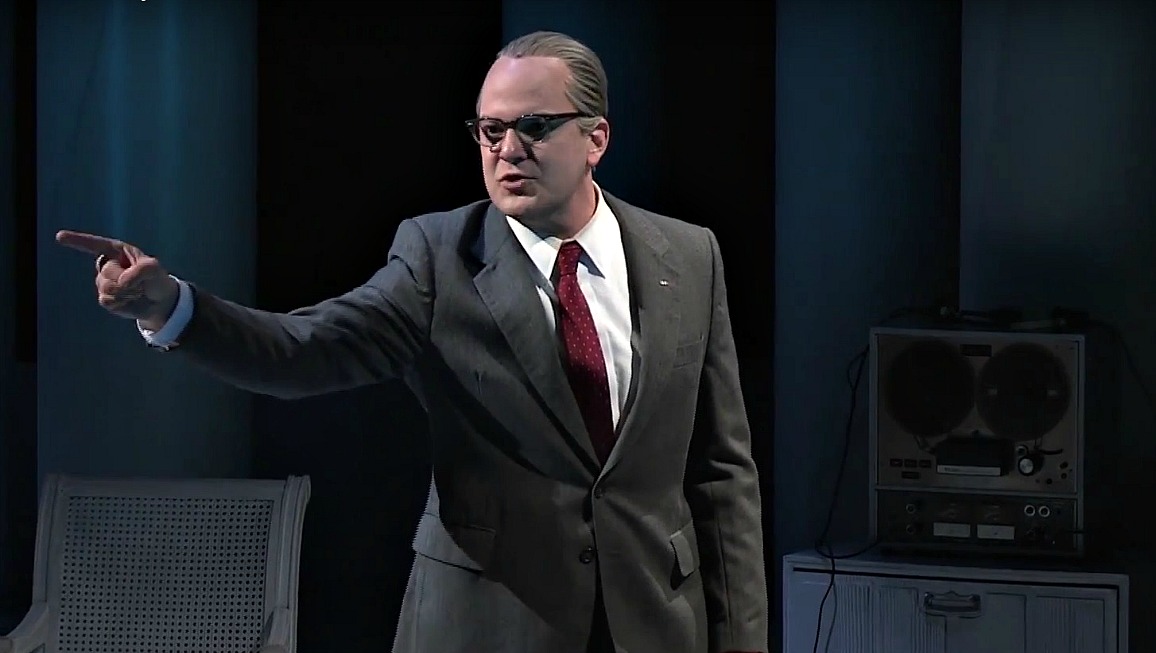 Brandon Potter as Lyndon Johnson in the Dallas Theater Center’s ‘All the Way.’

Lyndon Johnson looms large in the Tony Award-winning drama, ‘All The Way,’ opening at the Dallas Theater Center. The play follows Johnson’s frantic maneuvering and campaigning in his first year as president — as he tries to stay in the White House past 1964 and get his landmark Civil Rights Bill through Congress. KERA’s Jerome Weeks asks the North Texas actor at the heart of it, what’s it like filling LBJ’s boots?

Lyndon Johnson was just short of 6 feet four inches, putting him a little below Abraham Lincoln, our tallest president.

Who cares? Well, Johnson was famous in Washington for what was called ‘the Johnson treatment.’ That was his relentless, persuasive skill — to pass a bill, to get a nomination to the floor. Johnson harangued, begged, threatened, log-rolled and cajoled. He just wore people down.

The Dallas Theater Center’s ‘All the Way’ at the Wyly Theatre through April 3rd.

In particular, Johnson liked to get up close, grab arms, use his size to intimidate. Johnson’s vice-president, Hubert Humphrey — a frequent target of the ‘treatment’ — called him ‘a tidal wave.”

Brandon Potter happens to be 5 feet, eleven, and he plays LBJ in the Theater Center’s ‘All the Way.’ So how does he convey the forceful presence of such a man?

“I may not be that big a man,” Potter says, “but the benefit you have in theater is that I do have a big voice. It somehow translates to me being a bigger person. So I get the chance to really use that, to bully people and overpower them.”

Older Americans may remember Johnson’s voice from his public speeches. When you read those speeches, they can be inspiring. But hearing them, well, Johnson’s speechifying pace can put you to sleep. He  was never good on TV’s tiny screen, and on formal occasions, he rarely was as impressive as he could be one-on-one on the phone or especially in the Oval Office.

Following the wholesale police violence that greeted peaceful civil rights marches in Selma, Alabama, on “Bloody Sunday,” March 7, 1965, Johnson gave a televised address to a joint session of Congress to push his Voting Rights Act: “The cries of pain and the hymns and protests of oppressed people have summoned into convocation all the majesty of this great government.”

The rhythm may be the King James Bible, and these are words that Martin Luther King could certainly make sound like he’s summoning the hosts of heaven. But you can hear Johnson going solemn and slow, all the weight of history and providence making him sound like a funeral march.

Trying the ‘treatment’ out on Martin Luther King, Jr. Shawn Hamilton and Brandon Potter in ‘All the Way.’

In person, Johnson came alive. YouTube has a dozen or so taped telephone calls from the LBJ Presidential Library in Austin. In them, you can hear the profane Johnson, the whealer-dealer, the beggar and pleader, the impassioned believer who won’t take no. In one — nothing special, just a typical day at the office — Everett Dirksen, the Republican senator from Illinois and the Republican minority leader in the Senate, calls to ask a favor. Favor granted, Johnson unleashes several minutes of non-stop hectoring over his budget bill until Dirksen can only give up and say, “You’re a hard bargainer.”

“Uh no, I’m not,” is Johnson’s characteristic reply. He was never satisfied.

Robert Schenkkan’s play, ‘All the Way’ is popular — with a sold-out run on Broadway with Tony Awards for best play and best actor (Bryan Cranston) and now with productions popping up around the country. The Dallas Theater Center has extended its run even before it opened. One reason for this is nostalgia, a longing for when government actively worked to help ordinary Americans. These days, we long for someone — apparently, anyone — who might be able to make Congress function, someone who is willing to bruise egos or get his hands dirty to push the legislative process forward.

The fact is, though, Johnson was something of an aberration in the history of the federal government. Most times, this is the way Congress has functioned. And having served in both the House and as Senate leader, he was the rare president who came into office knowing full well what it took to get things moving. And the events of 1964 gave him plenty of reasons to pull those levers — and then hang on. ‘All the Way’ follows Johnson after the assassination of John F. Kennedy shoved him into the White House. He had only 11 months before the next election, 11 months to  get out from under Kennedy’s shadow, demonstrate he was a ‘real president’ — and then campaign to keep the job.

Johnson ripped through that year like a whirlwind — but the year planted the seeds of his greatest achievements and failure: civil rights and Vietnam. In his oratorio, ‘August 4, 1964’ — premiered by the Dallas Symphony — the late composer Steven Stuckey and librettist Gene Scheer used the collision of events on a single day, the murder of three civil rights workers and the purported attacks by North Vietnamese torpedo boats on US ships, to encapsulate both domestic and international troubles, both Johnson’s tumultuous presidency and Johnson the man, .

Shenkkan went the opposite direction — he opened his focus wide to encompass the scale of the man. He makes Johnson Shakespearean, a cross between Richard III and the Henry V, devious and earthy but also noble and heroic. This is Johnson in ‘All the Way’ responding to the objections made by segregationist Southern Democrats to his landmark Civil Rights Act: “This is not about the Constitution! This is about them that got more wanting to hang on to what they got at the expense of them that got nothing – and feel good about it!”

But Johnson’s restless urgency was fueled by more than just political ideals. It was deeply personal. Johnson was torn by unshakable fears and insecurities, including a family legacy of heart disease. He was a Southern white man who’d taught poor Mexican kids. He grew up in an area and at a time that was in palpable ways almost magically transformed by FDR’s New Deal — bringing electricity to small-town farmers and ranchers.

“He grew up poor,” says Potter, “and all the people in Washington, they didn’t. So he always felt that he was competing with that. He knew he would die soon — this wasn’t just some garden-variety existential anxiety. There was evidence in his family. And honestly, he didn’t last long after the presidency. He seemed to need that to keep going.” 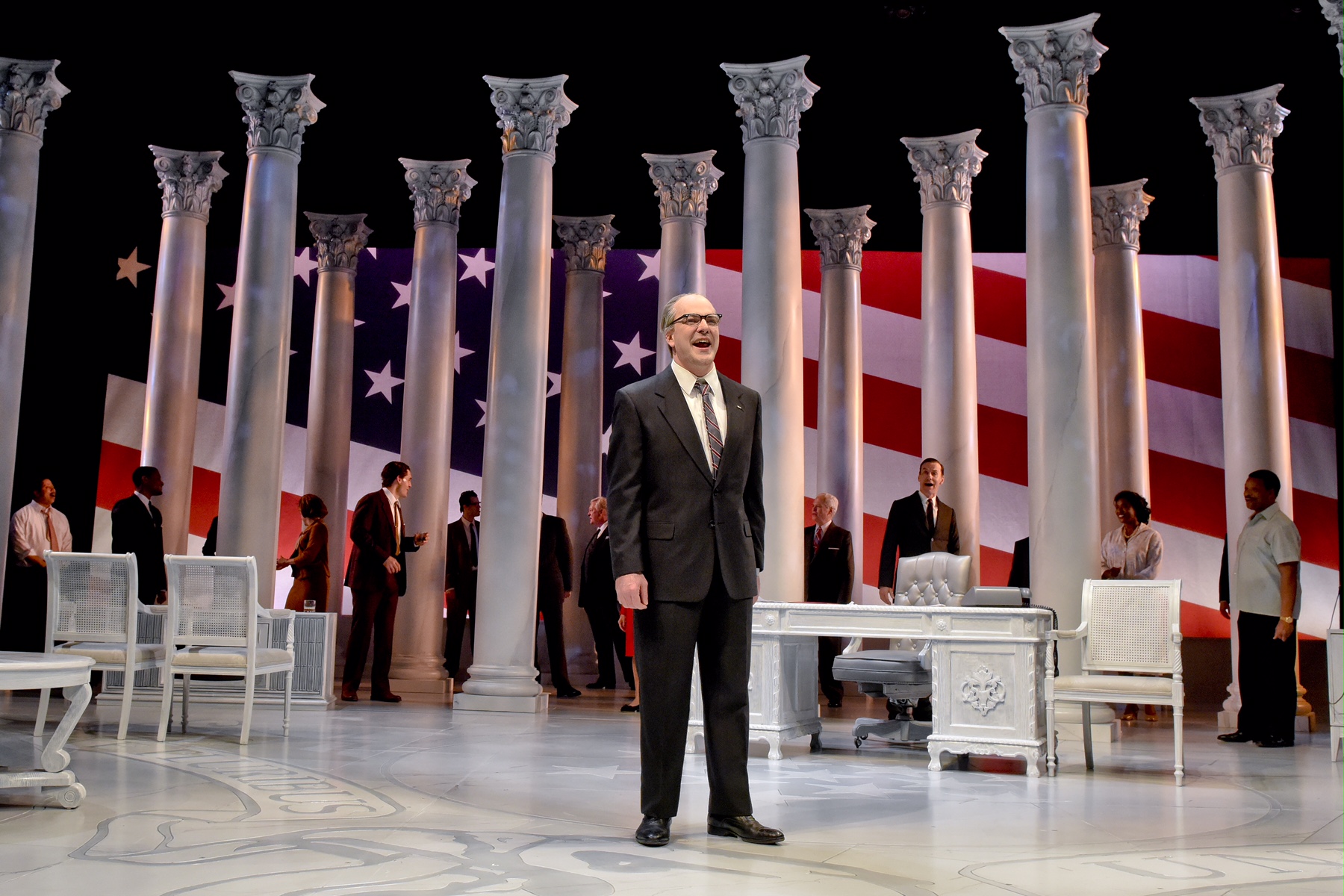 Brandon Potter and the cast of ‘All the Way.’ Photo: Karen Almond

With the role of Johnson, Potter had to face some fears as well. The production is a collaboration between the DTC and Houston’s Alley Theatre, only the second in the history of the two  long-established stage companies. During rehearsals in January at the Alley, James Black, the Houston actor playing LBJ, fell ill. Director Kevin Moriarty looked for a replacement who had experience performing the role. None were available.

Then he turned to Potter.

OK, so this sounds like the classic Broadway legend: The untried but talented understudy has this sudden opportunity to step forward and become a star! Except Potter wasn’t the understudy. He’d been cast as Governor George Wallace. He had to learn a huge, demanding, new role — Johnson is rarely off the stage — in a few days.

“I’m not someone who’s prone to nerves,” Potter says. “But my hands were sweaty and my heart went somewhere other than my chest. Right? I could hear my mouth saying ‘Yes,’ but I could also hear my brain screaming, ‘Is this even possible?’”

Potter is especially grateful to his fellow actors — they helped make it possible. “I’d go onstage, still uncertain, and wonder, ‘So what’s this scene about?’ And they’d tell me.” He leans in close — “They’d tell me by the way they spoke, the way they looked. They showed me, ‘It’s about this.’ Right! Got it.”

Mercifully, Potter says, he could use his nervousness in the opening scenes. Johnson himself is floundering, trying to find his feet in the wake of the JFK assassination. “But after those early hesitations, Johnson goes for it,” he says. “It’s just a great role — you run with it. The world is yours.”

For the 33-year-old actor from Weatherford, Texas, Lyndon Johnson is not just a great part, a major part. This is Potter’s first lead role — ever — at the Theater Center. LBJ thought of himself as an ‘accidental president’ who had to prove he was worthy of the job. It’s not escaped Potter that he, too, is an accidental president.

And starting this weekend, he’ll have to prove himself all over again.