Florence Shapiro is best known for her long career as a Republican Texas Senator. But after leaving the legislature in 2013, she became Chairman of the Board of the Dallas Holocaust and Human Rights Museum. The new museum broke ground Tuesday, and in our weekly State of the Arts conversation, I sat down with Shapiro to discuss her deeply personal connection to the project: both of her parents survived the Holocaust.

My father was sent out in 1939 on a Kindertransport. Which was for children. They had to be going to England or to Scotland and they had to have someone who would welcome them into their homes. My grandfather had a distant cousin who said yes, he could come. My father’s mother, father and his sister were all killed in concentration camps and probably about 37 members of his immediate family.

My mother was kept in different places around the countryside. People would hold them, keep them in their homes. They would live out in the forest. The Nazis picked up my grandfather on several occasions and beat him to a pulp. They paid a lot of money periodically to try to get out, to get passports. 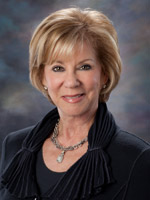 Finally, in 1939, they got passports to leave to go to England. Her father passed away six months later, from the beatings and other things. The caveat to this is that my sweet mother will be 95 next month.

On how her parents’ history colored her childhood: Well it was an interesting time growing up, because I knew my parents were different but I didn’t understand what that meant.

My father would speak to us about it. But he only spoke to us during very significant times during the year, during the High Holidays,      during the times when he became a little melancholy remembering what had happened to him.

Many years ago, when Stephen Spielberg started doing the Shoah, which is where his association goes around the United States and interviews Holocaust survivors, both my mother and my father were interviewed  So it opened up  some opportunity for me to hear their story as they told it to a third person, rather than to their own family and their own children.

On her father’s role in founding the original Dallas Holocaust Museum: I really remember those times. They were a group of gentlemen who were all Holocaust survivors who were friends. And they believed it was part of their memory to be able to build a museum to really tell the story of the Holocaust. To be able to move beyond what happened and share some of these stories. And they also wanted to be able to memorialize their loved ones who had died.

And they were curious: Why do I not have any grandparents. My children. Why do I have no aunts and uncles? And I always found when I was growing up, it’s a silly thing, but I really envied my friends who had inherited things: teacups and plates…a spoon set. I mean, little things you don’t realize that when you come to America like they did, they came with nothing. So their heritage was only what they spoke about.

On this week’s groundbreaking, and how she’ll feel when the new museum opens: Tuesday was very emotional for me. I tried really hard not to show it, but it was very difficult. I believe I was put on this earth to be a bridge.  To be the link between my parents and their heritage and their history, and my children and grandchildren, and their future.

I take that responsibility very seriously. And I believe that this museum is an outgrowth of that activity, for many of us. You can have a history museum. Everybody has history museums. To make it capable of changing behavior today, that’s what we dream this museum will do.