This month marks the 400th anniversary of William Shakespeare’s death.  In North Texas, we’ve been seeing film screenings, performances, readings, even a pub crawl this weekend. Art & Seek’s Jerome Weeks sat down with local ‘All Things Considered’ host Justin Martin to talk about one significant Shakespearean item we have right here: our very own First Folio.

JWJustin, the other day, I got to handle a First Folio. Picked it up, turned the pages — carefully.

JW These things have sold for millions of dollars.

I’m uh, asking for, you know, the listeners who might not know.

JWOK. So a folio is a book size. About the dimensions of what we’d call a coffee table book. To give you some idea, it was all determined by the size of the sheet of paper a printer started with. If you folded a folio page in half, you’d get what was called a quarto. Fold it again you get an octavo. Octavos and quartos were like the paperbacks of their day – cheaper, smaller, easier to carry.

So folios were the big, expensive books, the important ones. That’s why it was significant when after William Shakespeare died in 1616, two of his fellow actors, John Heminges and Henry Condell, collected all of the play scripts they could find and published them in a single folio. The only person who’d done that before — with the scripts of stage plays — was Shakespeare’s friend and competitor, Ben Jonson. He came out with what he called  ‘Works’ in 1616 — and caught a lot of mockery for being so pretentious. Stage plays did not have the dignity and authority of poetry or history or religious tracts.

So what Heminges and Condell did was an act of reverence. It said, ‘Our friend’s plays are worthy of this monument.’ And that edition is what we call the First Folio. 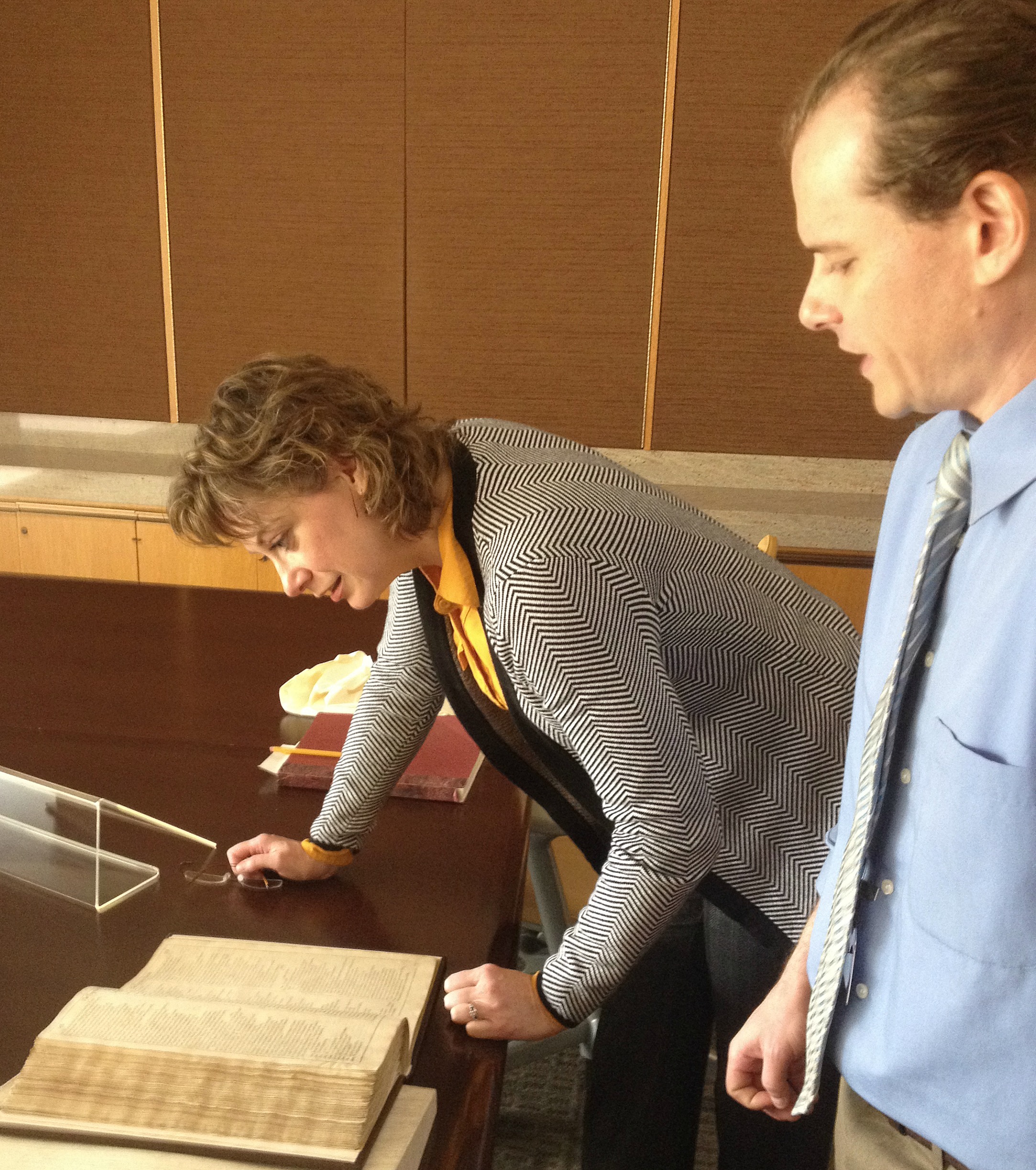 Krysta Scott of TCU and Brian Collins of the Dallas Public Library check out ‘Macbeth’ in the library’s First Folio. Photo: Jerome Weeks

JWI could give you all kinds of scholarly reasons — about how much we’ve learned from what’s been called ‘the most examined printed book in Western history’ — but I’ll stick with one big reason: We know the texts of 18 of Shakespeare’s plays – including ‘Macbeth’ and ‘The Tempest’ – only because the were printed in the First Folio. No other sources exist. Without the Folio, they probably would have been lost forever. So all those other editions of Shakespeare would have only half of his plays.

So it’s the 400th anniversary of Shakespeare’s death. Why is the Folio, in particular, getting so much attention this year?

JWOne major reason is the Folger Shakespeare Library in Washington, D.C. The library has been touring one of its First Folios to every state in the country. They can afford to — the Folger has 82 Folios, more than currently exist in all of England. And the Folio tour came to Texas in March – but to College Station.

Now, if North Texans feel a little left out, we shouldn’t. We already have our own First Folio.

JWIn the Dallas Public Library downtown. The Dallas Shakespeare Club, our oldest, most venerable women’s club, marked its 100th anniversary by buying a First Folio and giving it to the Library in 1986.  That makes our DPL one of only a handful of public libraries to own a First Folio (along with New York and Boston’s, for instance).

So they keep it in a vault somewhere?

JWNo, actually, it’s kept on public display in a handsome little room on the 7th floor downtown. It used to be a coat room, and the Shakespeare Club also paid for the entire permanent display with its motion-sensor lights that turn off when no one’s there.  But it’s a pity you can’t see the Folio right now because the 7th floor is being completely renovated. It’s supposed to re-open this summer, though — with the appropriate fanfare.

But earlier this week, Brian Collins — he’s the manager of the library’s Dallas history and archives division — he brought out the Folio. And I thought I’d share seeing it with someone who teaches Shakespeare but had never seen the folio in person. Krista Scott is a TCU professor and is a director and vocal coach for local theater companies.

But just as she and I were about to enter the library’s boardroom to see the Folio, Brian took us aside.

“Before handling it,” he said, “if you wouldn’t mind just washing your hands, and there’s a sink right in there.”

Were you all eating? Why would you wash your hands?

JW You wash your hands — it’s a safety protocol — you wash your hands because human sweat, your touch, contains oils and acids that, over time, will mar the paper. Other archives often provide white cotton gloves.

And then, there we were — in the boardroom, with the Folio laid out on two book rests. We were turning the pages of a book that could well have been handled by Shakespeare’s own fellow actors, 400 years ago.

I asked Krista — in the course of her vocal coaching of actors playing Shakespearean roles — does she ever consult the text of the Folio itself?

“I have used a facsimile of the First Folio in a couple of instances,” she said “The difference is really in the spelling with S’s looking like F’s and things like that. But for actors, it’s really about punctuation.” 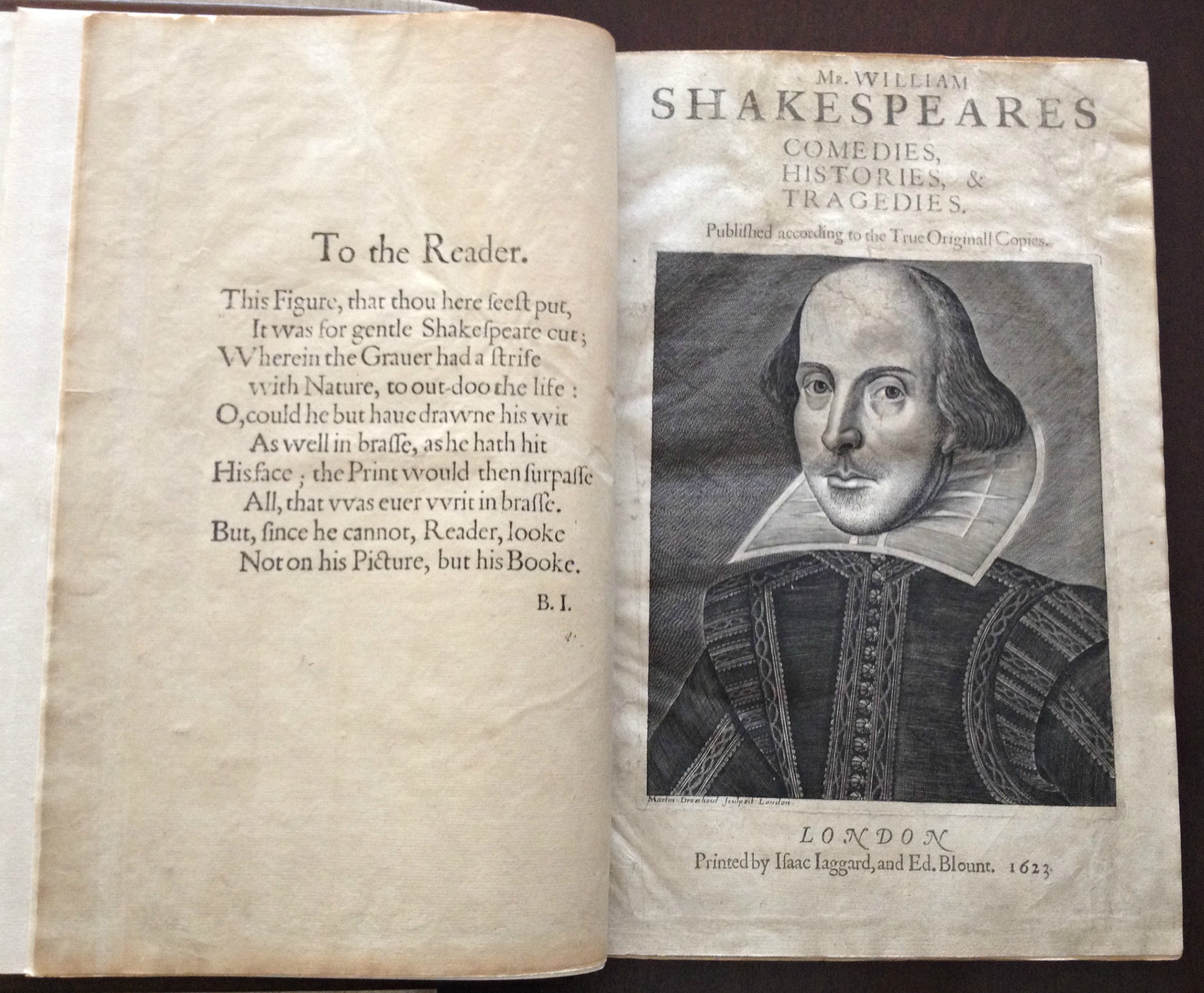 Dallas’ First Folio was restored after the Dallas Shakespeare Club bought it in 1984 — and then it was given to the Dallas Public Library two years later.

JWYeah. Typically today, any Shakespeare play we read has had a modern editor whos corrected and standardized the spelling and punctuation. They want it to be an easy reading experience for us. But a performance script or prompt book is a different matter. Some people believe that what seem like erratic commas and dashes were actually indications made by actors about what pauses to take, where to take a breath. They may be clues to how some of the speeches were performed.

One weakness with this argument is that it’s believed every Folio is actually different. The printers were constantly editing and proofing the book as they published it, so they corrected things, introduced new errors, even dropped whole plays. The Folio has been gone over so minutely, scholars can tell that some of it was proofed by a younger printer who was particularly ‘prone to mistakes.’

JW That’s the belief. There are 234 left, but one was just discovered in Scotland this month, another was found in France a couple years ago.

So how’s our folio look? How does it compare to them?

JWIt’s in really good shape — thanks to the Dallas Shakespeare Club. When they bought this Folio, they hired one of the Folger’s leading experts to restore it. He needed to take it apart, soak out the bleach on each page that had been mistakenly applied in an attempt to ‘clean’ them and then re-bind everything back together with a new leather cover.

So — with proper care, the Dallas Folio could last another 400 years