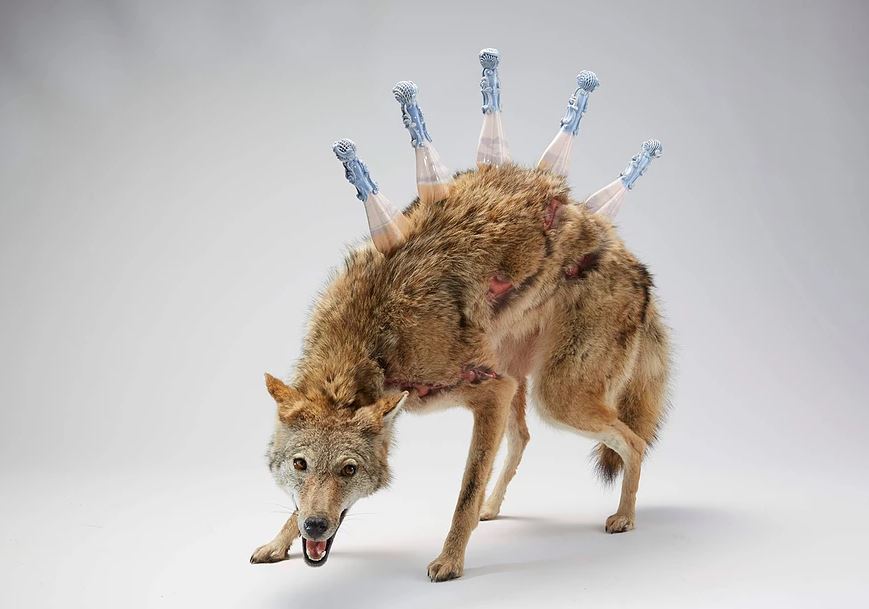 ‘Harvest’ is a collaborative artwork by Morgan and Eric Grasham.

Taxidermy is an art old as the Egyptians. But in the thousands of years since pharaohs had their cats embalmed and entombed, hunters and hipsters have adopted the practice. In this week’s Art&Seek Spotlight, we connect with a pair of North Texas artists turning roadkill into fine art.

Interested in seeing the Grasham’s bizzare animal sculptures? They’ve got work on view at Dallas art gallery Site 131. The exhibition’s on view through December 14. Info here.

Sculptor Morgan Grasham is in her studio on UNT’s campus in Denton. The grad student sits at a table using a handheld power tool called a Dremel to shape a molded piece of foam. Bits of dust fly into the air as she grinds into it. 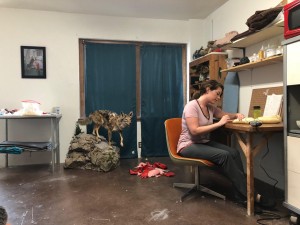 Morgan Grasham sits in her studio working on animal sculptures for a solo exhibition at UNT.
Photo: Hady Mawajdeh

“So I’m taking down the area between the pads, like the footpads and toepads,” she explains. “And then I’ll kind of round this up and out with epoxy to smooth it.”

The foam figure looks like an animal limb, but its missing its skin and fur. The piece is for a new series that Grasham’s working on. It’s series of stuffed animal sculptures for a solo show called “Unlearningthe Animal” – you can see’em inside UNT’s Art building. The unusual figures combine Beanie Babies with deer hides.

“So I actually sculpted out claws for these and I’m going to cast them and then I’ll actually add them in here,” she says pointing towards the foam animal limb. 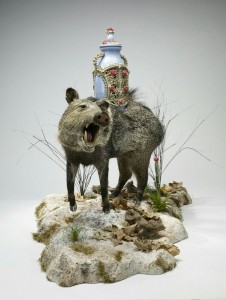 “The Stilling Engine” is a piece of rogue taxidermy made by Eric and Morgan Grasham.
Photo: Hady Mawajdeh

“I’m thinking of making animals that have, like, too many limbs and that are kind of ambiguous so you can’t tell what animal it actually is,” she says. “So it just makes it even more weird and surreal.”

This genre of sculpture is relatively new, but it’s been having a moment over the past decade-and-a-half. The artists don’t kill the animals they use. The animals are found. But they’re recreated as, say, goats with wings and a fishtail. And there are even high-heels made with hoofs.

Grasham says she came to it because she’d run out of options.

“I was a bronze caster in undergrad,” says Grasham. “And after that, there was no foundry. So this was my way of getting back into sculpture. I got sick of painting. (laughs)”

To learn the trade, Grasham took a job at a taxidermy shop in San Angelo four years ago. She says she had never done anything with dead animals before.

“People bring in carcasses. Dead animals. Recently dead, hopefully. And then we skin them, tan them – on site –and then mount them. So there’s a lot of hide prepping that goes in. And you have to prep the form as well. It’s a lot of work and it takes months and months,” Grasham says.

That job also led towards a creative collaboration with her husband Eric Grasham. 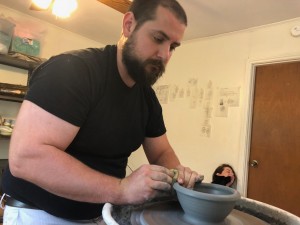 Eric Grasham demonstrates throwing a bowl on his silent pottery wheel, while Morgan and their pup hangout in the studio.
Photo: Hady Mawajdeh

Watson says Eric’s work floored her. In addition to throwing pots, he uses a technique called “piping” to craft ornate clay artworks. Piping. It’s kind of like using a pastry bag to ice a cake.

“I don’t know there’s just something about the way he was executing it that was so beautiful,” Watson says. “And like I said, I also describe his work as art nouveau. And it’s just, it’s so gorgeous.”

Inside Eric Grasham’s home studio, he starts his pottery wheel, slams a piece of clay onto it and then his wet hands do a delicate dance that shapes the blob into a stunning bowl with cool wave shapes on the outside.

“It doesn’t take me more than 60 seconds to throw a bowl,” he says. “I’ve probably made more than 100,000 of them over the years. Lots and lots of production work in my past.”

Then he shows me the lavish, ornamental daggers he made for ‘Harvest.’ It’s an animal sculpture he worked on with Morgan. The daggers have been slotted into the arched back of a taxidermied coyote.

These are the daggers and ticks that interface with @morgangrasham ‘s coyotes. I can’t wait to show off the pictures we have taken tomorrow. . . . #ceramics #clay #pottery #mold #piping #claypiping #sky #clouds #sunset #landscape #instaclay #instapottery #instaart #coloredclay #masonstain #nofilter

“It’s supposed to be reminiscent of a kind of blistering or a branding. The idea is that the ceramic components have somehow infected this animal,” says Eric.

The coyote bares its teeth, looking ready to attack. The entire piece is made even more bizarre and disorienting because the daggers are exquisite. Their handles are decorated with baroque piping and an elegant orb.

“An art piece is successful if somebody has a strong reaction,” says Morgan Grasham. “Whether they love it or they hate it or they just go, “EWW!” which we have gotten before.” 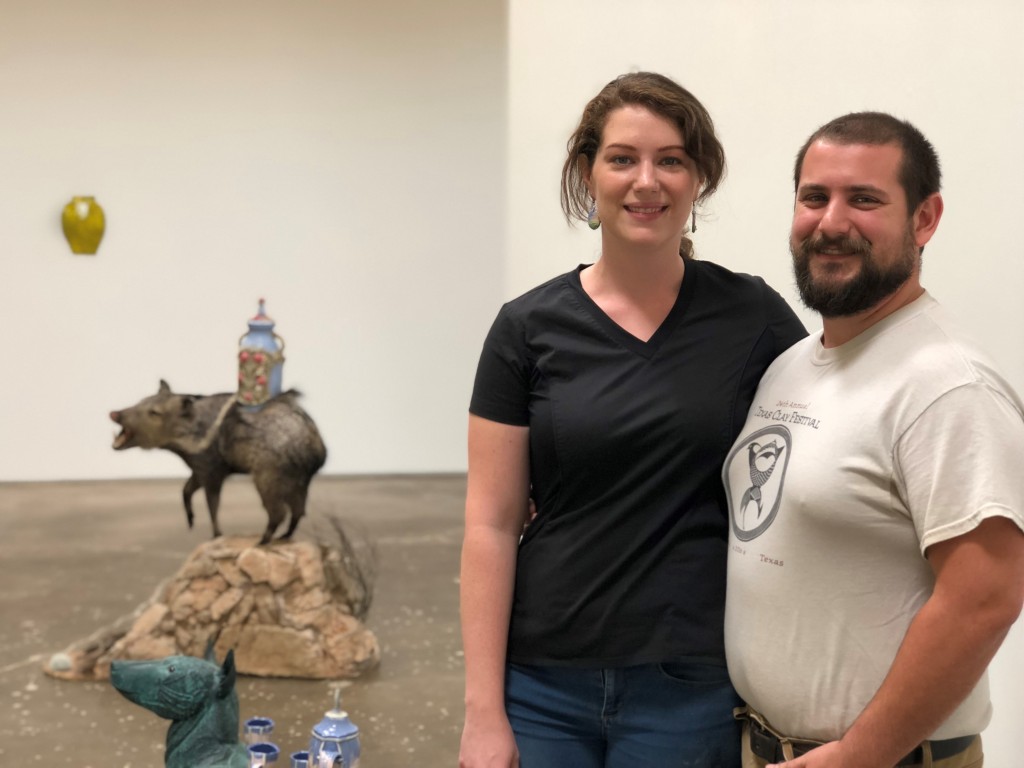 The Grashams at Site 131 where you can view their animal sculptures.
Photo: Hady Mawajdeh

The Grashams recycle dead wildlife, making statements about how humanity has used and abused animals. They highlight how we’ve turned them into objects that are both monstrous and elegant.