The sweltering hallways of the Continental Gin Building in Deep Ellum are lined with doors, from the plain white frames to elaborate entryways, including one that resembles a dungeon door. Behind them, in spaces where cotton gins once stood, 61 artists are creating at all hours of the day.

There are painters, fashion designers, sculptors and more. And next spring, they may all have to find a new home. By late 2016, they’ll know whether or not the space will be renovated and rented to the Pegasus Charter School.

“It’s such a magical place,” says Fannie Brito, a visual artist who has worked in the building since 2000. “It has something, a je ne sais quoi. And it’s very sad that we’re going to let it go.” 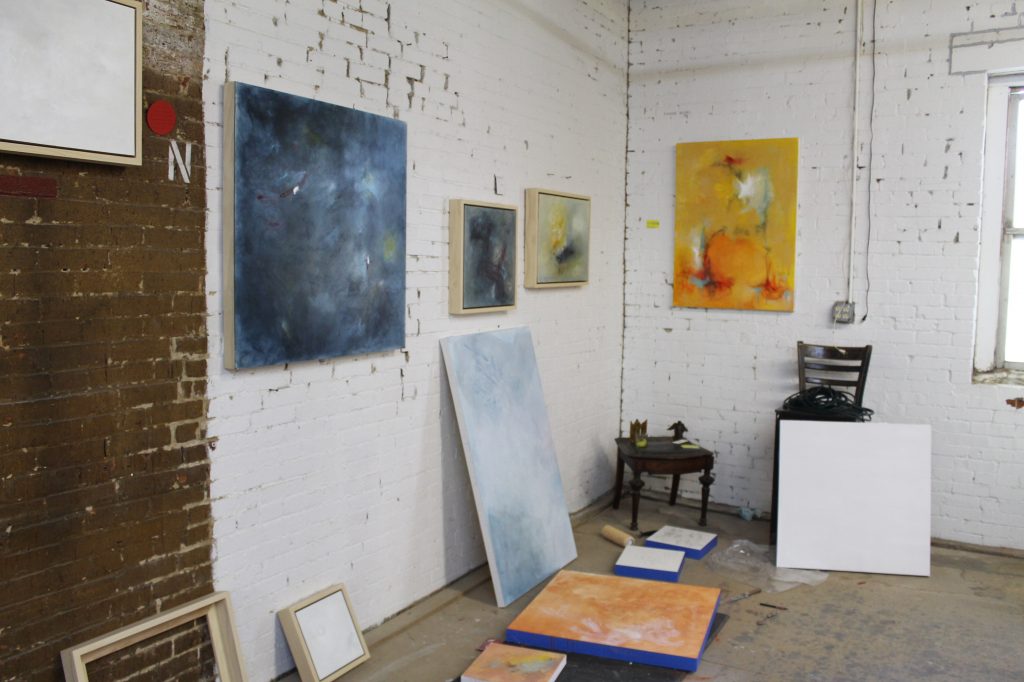 Fannie Brito shares a room with four other artists, with curtains separating their work spaces. All photos: Francesca Paris.

John Tatum, the property owner and real estate developer who bought the property in 1982, says he’s been searching for a viable plan to restore the building for about 20 years. The structure of the building, in addition to the shortage of windows, makes it less than ideal for apartments or office space, but fitting for a school.

“It’s not a question of which is better, a school or artists,” says Tatum. “But a school can support the redeveloped building. Pegasus Charter Schools is a perfect tenant for the renovated space.”

The history of the building goes back to 1888, when Robert S. Munger established a complex of brick warehouses and manufacturing spaces to house his Continental Gin Company. Though the building has been remodeled and updated since then, much of the late 19th century, early 20th century look remains.

The complex was named to the National Register of Historic Places in 1983 by the National Park Service, and the city designated the “Continental Gin Historic District” four years later. The building is zoned in a “historic overlay” category, which means that any work on the building has to meet specific preservation criteria, and the city council has to approve plans.

If all the pieces come together for the renovation, says Tatum, construction wouldn’t start until spring of next year, after a final open studio.

For many artists who work there, the building’s quirks only add to its charm, and that benefit goes hand-in-hand with the community fostered by the space. 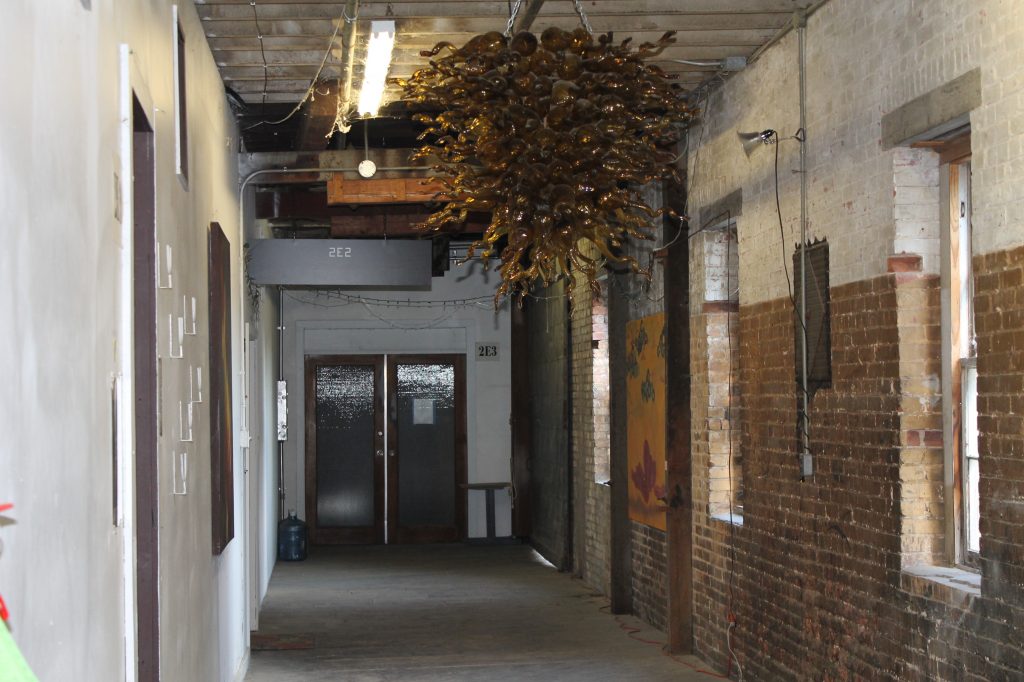 There’s no central heat in the hallways of the Continental Gin Building.

“Probably the best thing about this building is my neighbors,” says Sarah Jones, who designs the woman’s clothing line Status. She says it inspires her to work alongside so many different kinds of artists, to talk in the hallways and to see their projects.

Jones has an office, designing space and collection in 800 square feet on the third floor, with wide windows and an original brick wall. Though the lack of central air, and all the stairs, can be a pain, she says the building has been great for her work.

“With my clientele that come to visit, you either need really nice or funky, so this serves the funky, artsy niche for a place.”

The affordability of the building is another draw. There are 34 spaces in the building, some shared and other individual, all small. Jones says this setup makes it affordable for artists who want a creative space without the pressure to perform at the financial level that would accompany a more expensive retail space. 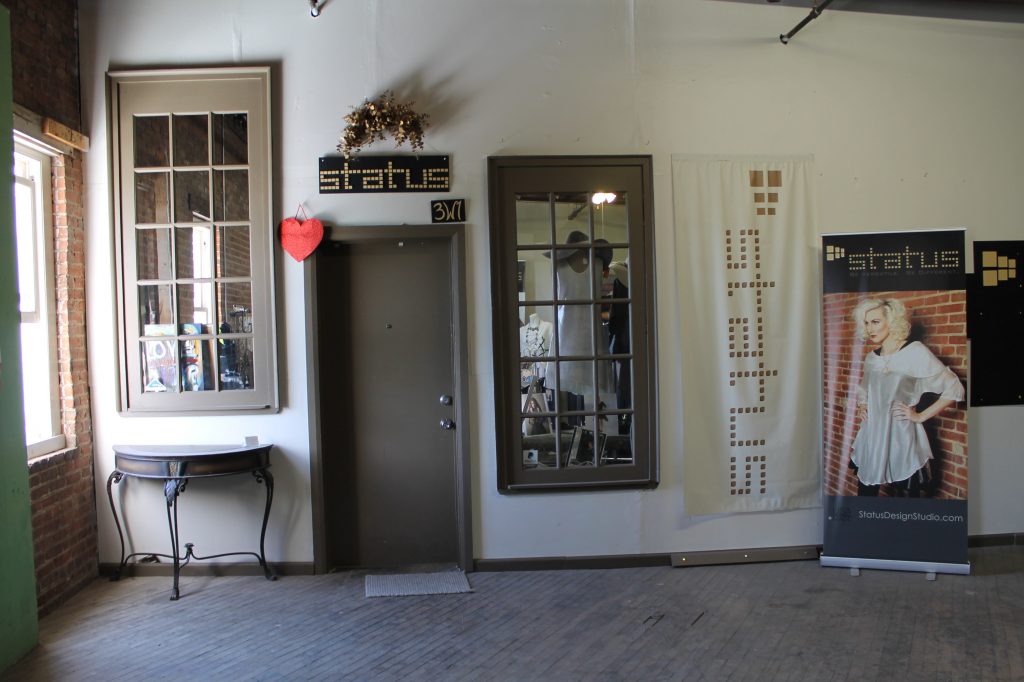 Sarah Jones works out of 800 square feet, where she has her office, designing space and collection.

Cost is an issue that many artists may face if forced to move out. As Dallas grows vertically — even across the street from the Continental Gin Building, a new development is rising into the sky — spaces for a large number of artists are hard to come by.

Andrew Kochie is an artist who moved into the building at the end of July after waiting a year and a half to get a spot. He is concerned about where all the artists will go next, though he has ideas about potential spaces in the Cedars district.

“We’re going to try to relocate and make a plan for the future,” he says. “Because the spaces are disappearing. We’re running out.” 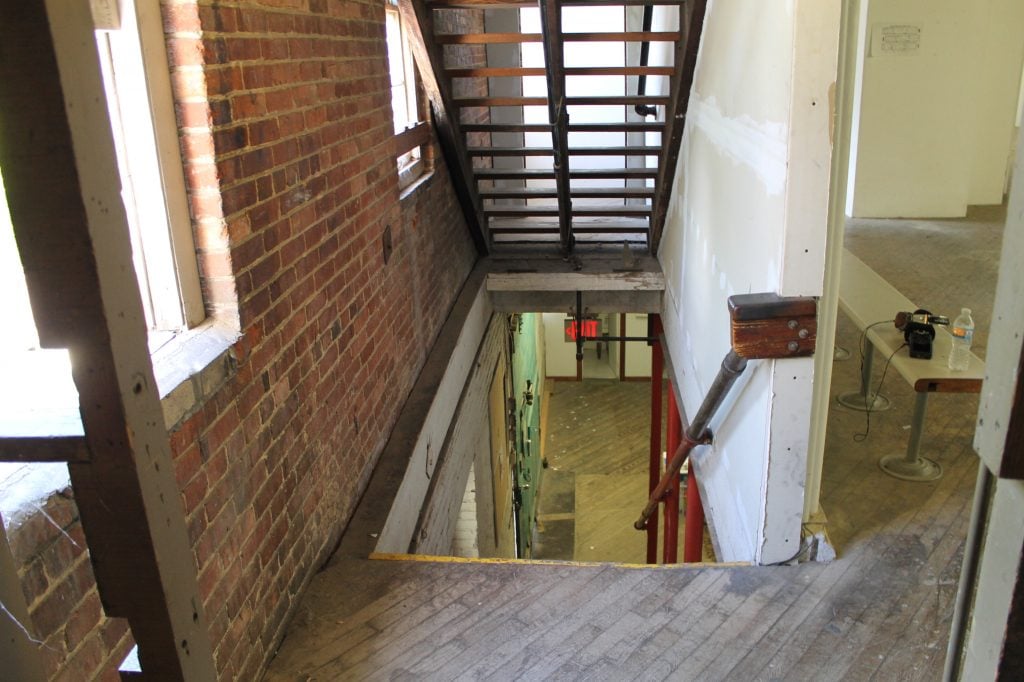 Last year, the artists also heard that they might be pushed out of their space by the renovation. That plan was cancelled because of the timing of Pegasus’ current lease, according to Tatum. Though details still have to be worked out on both ends, the move looks more likely this year.

Outside of the financial cost of finding a new space, the loss of community could hit some artists hard. The building is full of connections that span hallways and floors. Jones has a former intern working in the building. Brito paints a floor above her mentor, Bob Nunn.

Even for artists who don’t see each other more often than the biannual open studio events, the presence of so many other creatives in one place is important. Brito does most of her work between 9 p.m. and 5 a.m., when the building is empty, and interacts with so few people that some artists mistake her for a newcomer. Still, she says being in a community is good for her work.

“Just to know there are other people creating, there’s some inspiration in that.”

There is hope, though. Tatum says the building manager, Christy Harris, is supporting the artists’ search for a new location, and the goal is to keep the community intact. Jokingly referred to as a mom by some in the building, Harris works extensively with the artists, managing the business end of the open studio events and more.

“She does all the things no artist wants to do and makes it great to work here,” says Tatum, “and she wants to be a part of their relocation.”

Kochie says Harris keeps the artists well-updated on the future of the building, and she is helping start a search for a new communal space.

Britto says she hopes she can stick with some of her fellow artists in the future — and hold on to that inspiration. She says working in the building, surrounded by artists past and present, has made her feel like part of something bigger. 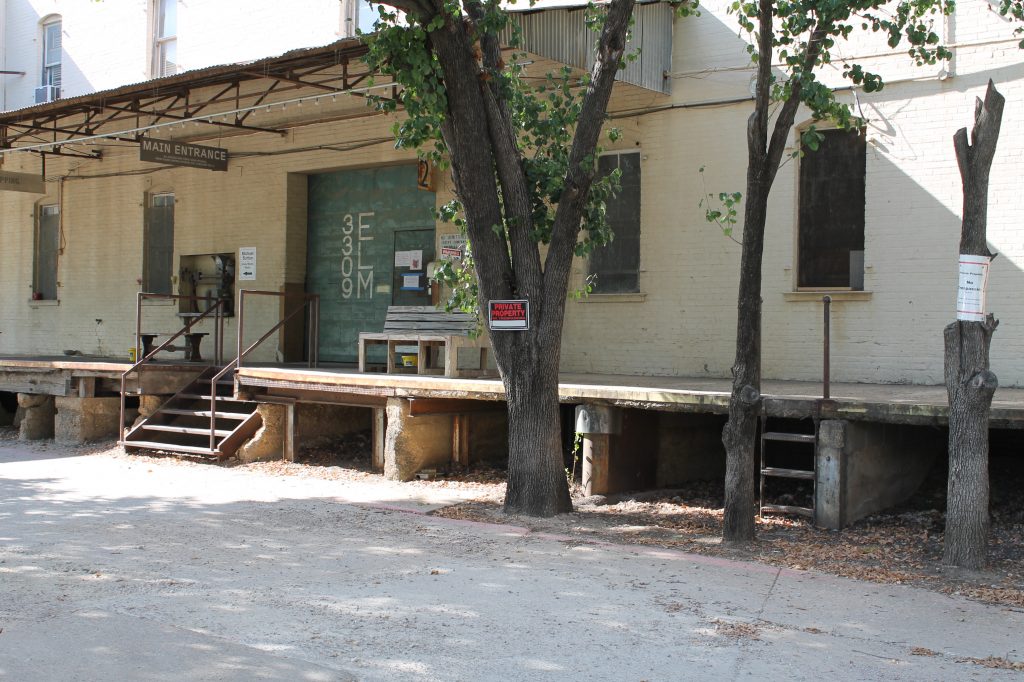 Many artists will miss the community that they’ve found in the building.

But she’s also at peace with the potential redevelopment because of the institution that would take her place. To see the artist community give up its space for education would also make her feel involved in something larger than herself.