Guest blogger Olin Chism is a classical music critic whose work has appeared in The Dallas Morning News and Fort Worth Star-Telegram.

HOUSTON — The Houston Grand Opera’s wildly adventurous “Ring” cycle is drawing to a close with a production that, once again, threatens to bury the music beneath a mountain of scenic detail.

Wagner’s “Die Götterdämmerung,” seen on Tuesday night, has a title that goes beyond music to denote a general collapse of civiliation. Houston has made that collapse a four-year project, presenting “Das Rheingold,” the cycle’s introductory opera, in 2014, “Die Walküre” in 2015, “Siegfried” in 2016, and now “Die Götterdämmerung.”

The ultimate aspiration of many opera companies is to present all four operas together, in one season, as a festival. Perhaps Houston will get to that later.

It’s probably wise to say at the outset that, in musical terms, Houston’s “Die Götterdämmerung” is a success. The cast and chorus are strong, as is — aside from a few insignificant bobbles – the orchestral playing under Patrick Summers’ direction.

It’s the scenery that presents problems; it takes on a life of its own, quite apart from the music. Some future opera-lover, asked to list the most distinctive elements of the Houston “Ring,” would probably start with the physical production, rather than any musical element.

The production, which originated with the Spanish theatrical group La Fura dels Baus, is futuristic and highly complicated, with minimal obvious connection to the story it’s telling.

And then there are the supernumeraries — 30 of them — and the crane operators — 10 in number — plus a massive chorus and a large orchestra.

The production would have been impossible before the age of the computer; there are constant shifting projections and multiple visual styles. A term from science fiction, “steampunk,” has been suggested as an influence. 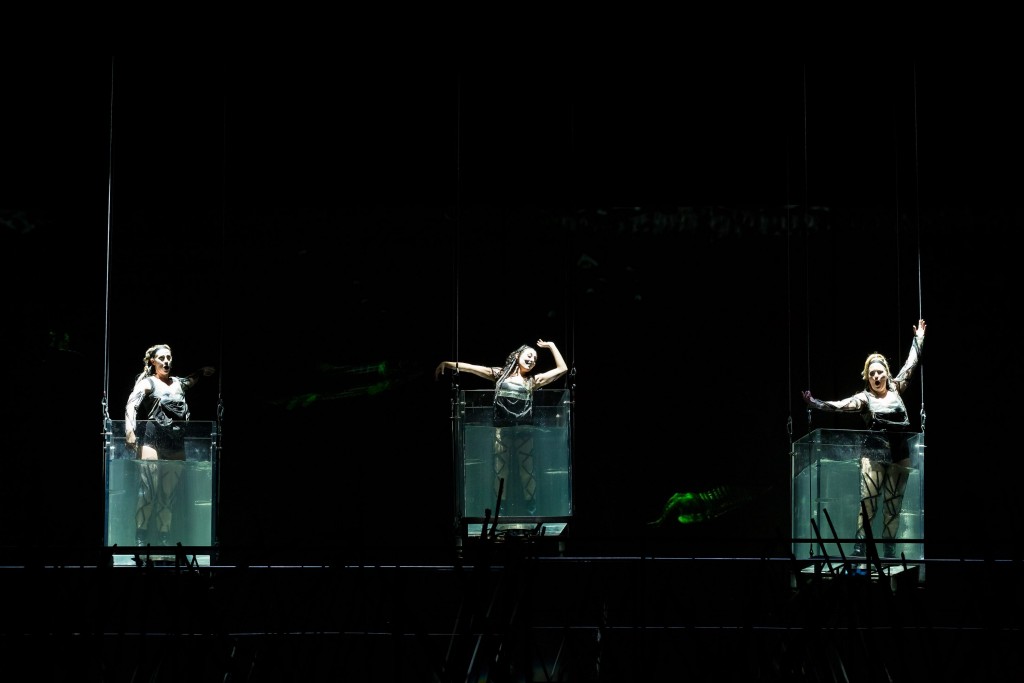 There are too many details to try to list them all, but those who have seen Houston’s first three “Ring” operas will recognize many of them. A prominent element is what appears to be some kind of factory. What it builds is unclear, but it certainly seems ominous.

There are cranes which lift singers high (those with vertigo needn’t apply), Rhinemaidens submerged (sometimes completely) in tanks of water, human bodies strung up by their heels like so many sides of beef, flames aplenty, especially in the climactic scene, enough athletic work to keep a team of acrobats busy.

The singers who enlivened all this deserve medals. One should go to tenor Simon O’Neill, who managed to perform an impressive Siegfried even when (for a brief moment) he sang upside-down like the aforementioned side of beef.

A worthy partner to O’Neill was soprano Christine Goerke as the heroic Brünnhilde. Also outstanding in a generally excellent cast that often had to perform in trying circumstances was sonorous bass Andrea Silvestrelli as the villainous Hagen.

Also deserving of a medal is chorus master Richard Bado, who captained a very large group of choral singers into a cohesive group (“Die Götterdämmerung” is the only “Ring” opera that has a chorus).

There’ll be three more opportunities to attend this “Die Götterdämmerung” and try to grasp some of its complexities: It will be repeated on April 29 and May 4 and 7.