It appears Kate Hamill and I must agree to disagree on what a stage adaptation of a Jane Austen novel should entail.

Which, of course, is a dry, Austen-ish way of asking, “What’s up with that?”

‘Pride and Prejudice’ at WaterTower Theatre through Nov. 5th

Hamill is the actor-playwright at the Hudson Valley Shakespeare Festival who has adapted ‘Sense and Sensibility’ and ‘Pride and Prejudice’ – to rapturous reviews in ‘The New York Times’ as well as transfers off-Broadway. Both plays have had subsequent productions around the country, and Hamill intends to adapt all of Austen’s novels eventually.

It’s difficult to imagine how she might top her version of ‘Pride and Prejudice’ – currently in its area premiere, staged by artistic director Joanie Schultz as WaterTower Theatre’s season opener. Given this show’s wind-tunnel level of energy and clattering theatrical cleverness (some of it devised by Schultz),  by the time Hamill gets around to adapting ‘Mansfield Park,’ she may have to hire a troupe of Marx Brothers impersonators and let them whack away at each other.

First, the WaterTower production is indeed funny sometimes. Schultz’ direction is inventive. Furniture pieces don’t just roll on, actors use them like skateboards or wheelchairs. The quick-change drag acts are delightfully cheap and cheesy, and the re-configuration of the entire theater space is welcome after it was stuck for so many years in a single layout (the set design is by Chelsea Warren). Austen’s wonderful wit does peep through occasionally in the dialogue, even though Schultz has a number of actors bark it out in Monty Pythonesque accents. It seems almost inevitable the show would generate some laughs from the many absurdities being tossed at us. In fact, when the ‘Times’ reviewed the Hudson Valley debut of ‘Pride and Prejudice,’ it hailed the stage version as “madcap.”

For what it’s worth, according to the online concordance at the Victorian Literary Studies Archive, Austen never used that particular term in print. Doesn’t really seem like she aimed for it either, in her precision-targeted comic novels. 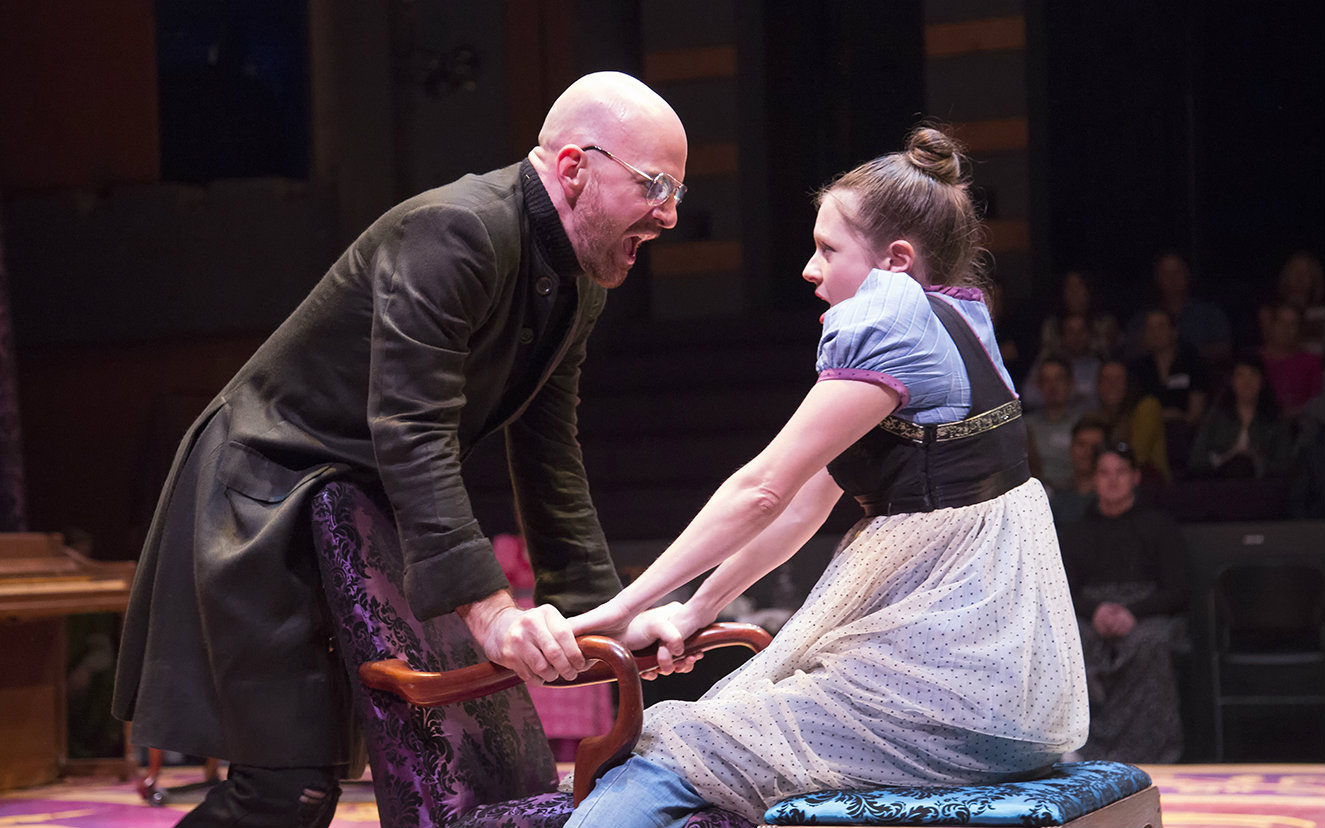 If anything, the novelist’s writing has been faulted for the opposite of madcap — for being too twee, too discreet, too fiddly with the tell-tale details of class insecurity. Charlotte Bronte famously dismissed Austen for never leaving her well-trimmed garden for the larger, darker world outside. And nowadays, contemporary TV viewers may fall unconscious during yet another lace-and-porcelain BBC adaptation. This has long been the knock against Austen, the accusation her advocates have vociferously denied: With all of human life to play with, she chooses a tastefully restrained game of How to Win at Love and Estate Planning.

Indeed, two years ago, when the Dallas Theater Center presented Hamill’s first adaptation, ‘Sense and Sensibility,‘ it reduced Austen’s novel to a trivial comedy of manners – in effect, fulfilling the charges of Austen’s critics: It was well-executed, droll, affected and frivolous.

But Emma Thompson – in her Oscar-winning screenplay for the 1995 film of ‘Sense and Sensibility’ – underlined how high the stakes actually were for Austen’s women. In words the novelist never wrote (she never needed to because her audience knew this already), Thompson explained how marriage and male privilege utterly dominated the lives of these women – how little influence they had, how terrified they were by the loss of a male heir or the lack of an acceptable husband. And this was so, even in Thompson’s adaptation, which made Austen’s men more feminist and sensitive and interesting than they are in the book. (Alan Rickman may have been too old to play Colonel Redmond, but the Ang Lee film remains one of the finer, more moving Austen adaptations of recent vintage.)

It’s true Hamill does include such a description of women’s confined roles in ‘Pride and Prejudice’ at the end of the first act. Mrs. Bennet, played by Wendy Welch, completely loses what little self-control she’s had because our heroine, Lizzy, the sensible Bennet daughter, has rejected a marriage offer from her creepy, social-climbing cousin Collins at the same time the lovely but shy daughter Jane has somehow lost a very lucrative possibility with the marriage-minded Mr. Bingley. Mrs. Bennet reads her daughters the riot act about money, marriage, women’s imperiled status in general and how the two of them have trashed the entire family’s hopes for the future.

It’s also a speech that really doesn’t exist in the original. Perhaps Hamill learned something from Thompson’s screenplay. 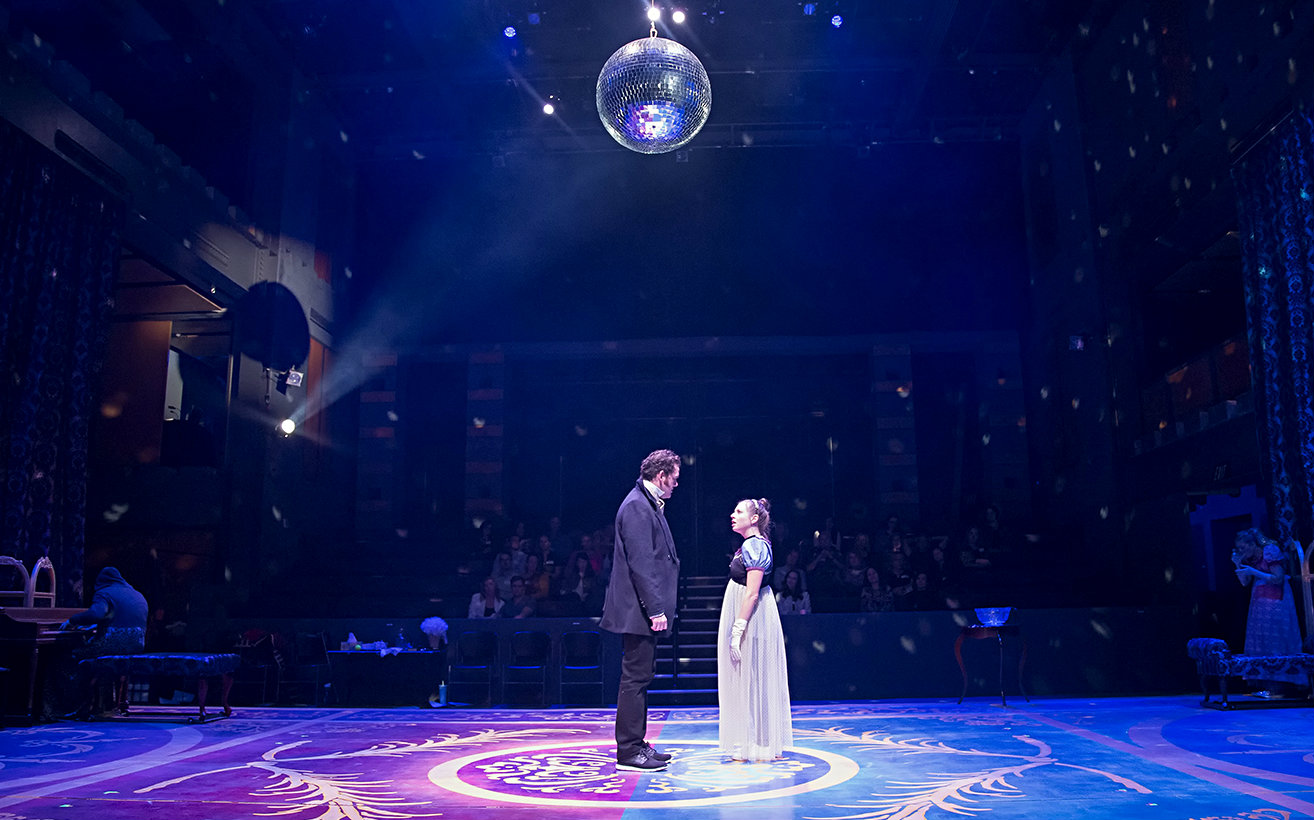 At any rate, the stage speech – a rare opportunity for Welch to unleash her inner rampager – is relatively weightless. Ma Bennet has already established herself as mixing maternal concern with outright mercenary interest (“Ten thousand pounds a year!” she wails repeatedly). She’s an embarrassment not just to the eye-rolling Lizzy but to her possible love interest, Mr. Darcy, and others of his social circle.

In Austen’s world, Mrs. Bennet is Not a Serious Person, even as her concerns are valid. (John Mullan, author of ‘What Is Important in Jane Austen?‘ points out: In the novels, the important plot information is always delivered by “the stupid people.”)  And as if to completely balloon-pop her dire warnings (and to end the act on the right note of imminent threat and humor), the speech is interlarded with several comic moments, just to make sure we don’t take Mom’s warnings too seriously.

Second important consideration: With her first adaptation, ‘Sense and Sensibility,’ Hamill aimed for creating a bustling portrait of Regency society with a cast of 11 actors, almost all playing multiple roles. With ‘Pride and Prejudice,’ she seriously streamlines Austen’s story. She reduces it primarily to the immediate Bennet household and the three male suitors (ergo, only eight actors are needed this time).

This smaller focus tends to intensify the farcical nature of the proceedings. Almost everyone is nuts. Schultz has some actors go for broke with extravagant comic caricatures mostly of supporting figures (Brandon Potter, Steph Garrett, Justin Duncan, Kate Paulsen). We don’t get Austen’s crystalline social satire of the English classes so much as a visit to a family asylum.

But four performers (and their characters, of course) do recognize the general chaos around them and choose, more or less, to withdraw from the emotional noise. There’s Kate Paulsen’s delicate performance as Jane, the famly’s hope who cannot comprehend why she’s been abandoned by the dithering Bingley (Justin Duncan). Meanwhile, as Lizzy, Jenny Ledel delivers another perfectly tuned performance. Her Lizzy is a smart cookie who’s earnest, exasperated, lovelorn and not as sharp as she’d like to think: Not recognizing her own feelings, she chooses to reject the whole marriage-go-round entirely.

As the paterfamilias Mr. Bennet, Bob Hess has one of those choice little comic roles, the voice of defeated reason who’s given up trying to curtail the zanies around him. But he’ll still puncture their outbursts with droll observations. Hess knows the comic contrast is what plays well, so he enjoys himself hiding behind Mr. Bennet’s defensive newspaper. It’s also Hess’s drag portrayal of the woeful Charlotte Lucas, a friend of Lizzy’s, that lets us feel the poignant (and yes, comic) pains, the constricted choices for Austen’s (eventually married) women.

Finally, John-Michael Mars plays Mr. Darcy as stiffer, sterner, more furrowed-browed than most. He doesn’t convey the inner, troubled smolder Darcy needs to suggest he’s unknowingly, unwillingly, attracted to Lizzy. It’s only at the very end, when Ledel and Mars are alone, that things quiet down enough that some of their central, motivating romance comes through.

Third consideration: Despite appearances, I am not a loyal, hide-bound member of the Cult of Jane, defending her honor against all updatings and directorial inventions. True, I enjoy the comic sharpness her novels’ delicate restraint grants them, as well as her hints at deeper, underlying fears. But for the umpty-ump version of ‘Pride and Prejudice,’ goosing it with manic fun might just be what’s needed.

After all, scholars and purists howled at Colin Firth’s wet-shirted Darcy in the 1995 BBC mini-series, even as female Janeites ranked him as their fave, though Austen, of course, never would have written such a brazen scene. Or would she? Feminists have since countered that turnabout is fair play for the female gaze. A modern view of the male-as-sex object is one that Austen might have embraced, given that her subject is primarily women’s inner lives. Sex may remain the Great Unmentionable in her novels, but it’s hardly like it didn’t exist in 1813. So why not a hunky Darcy now – to say what Austen couldn’t?

One might argue that Schultz and Hamill are doing just this, subverting the two-century-old carapace that confines the novel. They do so by giving it all this campy theatrical life and pop-culture in-jokery. The WaterTower show immediately announces that things will be eagerly unconventional (and a bit obvious) by opening with Wayne Fontanta’s 1965 hit, ‘The Game of Love.’ Schultz and Hamill promptly launch their wild anachronisms at us. 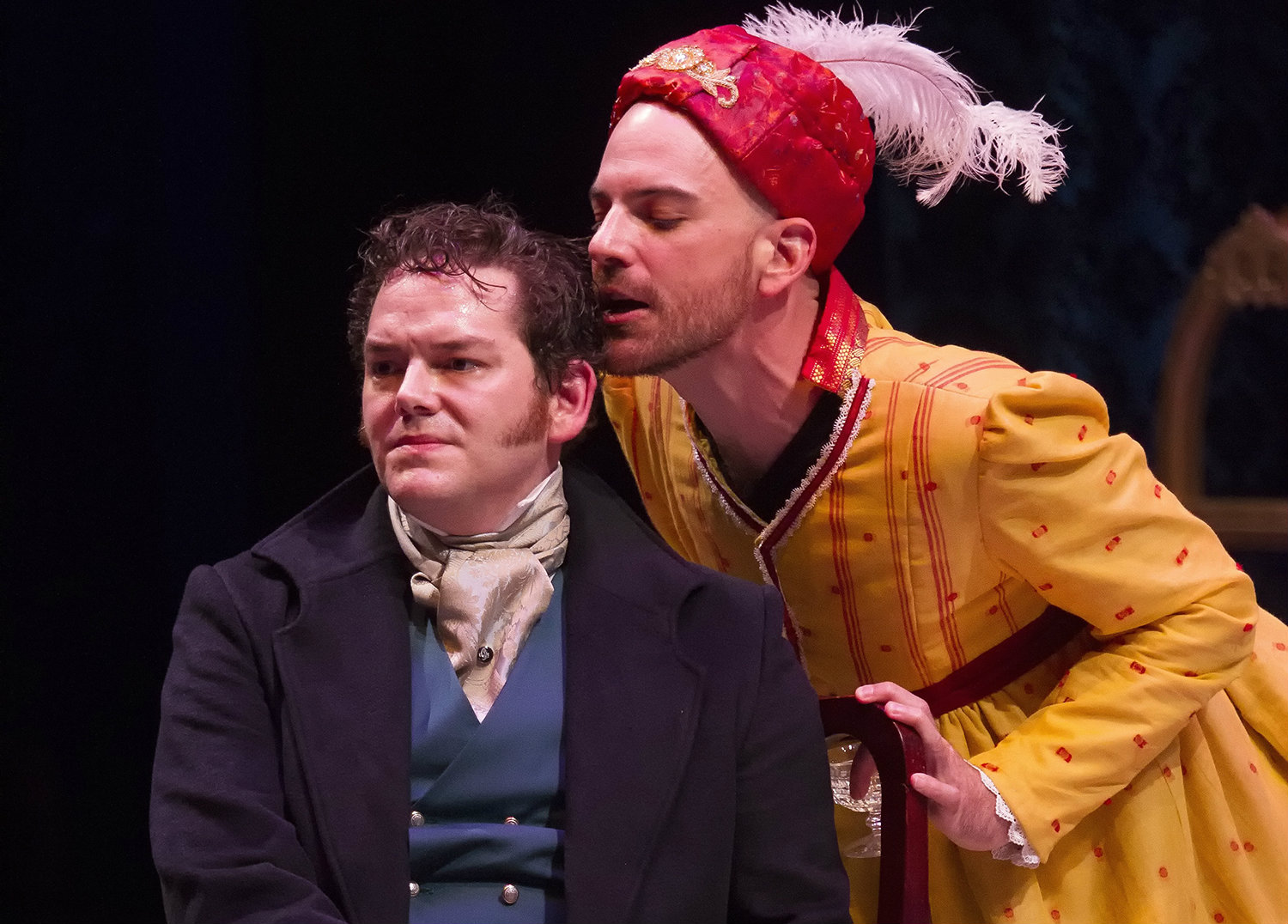 Running with the game metaphor, Schultz has everyone wearing athletic shoes (the costumes are by Sylvia Fuhrken). In fact, that previously mentioned new layout for the theater? It’s typically called “stadium seating.” The audience is divided into two sections, each seated on opposite sides of the playing area, like high school fans at a basketball game. The set is also armed with basketball hoops and there are referee whistles going off and penalty buzzers and a timekeeper’s bell.

Who knew the Regency liked nuthin’ but net?

In short, given the chance, Schultz never gives up hammering a joke. When anyone encounters the homely daughter Mary Bennet (played in drag by Duncan – in a black hoodie that makes him look like a resentful monk), they immediately flinch in surprise at her appearance, clutching their heart. It’s an oldie but a goodie. By the end of two hours, though, what was a running gag about her looks has become a marathon, dragging itself to the finish line.

In Austen’s novels, there has always been the occasional touch of refined cruelty in her sharp-eyed social satire. At times, she’ll just flat-out call a character “stupid.” (“For what do we live, but to make sport of our neighbors and laugh at them in our turn?”). Here, the repeated, horrified double-takes mock Mary for what she can’t control (and Austen depicts her only as plain, not actively gruesome). From the start, Mary’s simply a loser in the all-important marital sweepstakes going on.

But when youngest daughter Lydia (Steph Garrett) crows that she’s slam-dunked the marriage game before her sisters have even gotten off the bench, she quickly learns she’s been headstrong and heedless. She’s sacrificed social approval for a quick cash-in. Austen’s novels are always lessons like this about balancing moral and social propriety with personal fulfillment: Along with her heroines, we readers learn how these people and their society and their inner motivations work and how they should act (it’s one reason some readers dislike her – those witty but preachy judgments).

But the adaptation treats Mary shabbily; it’s not as understanding as Lizzy herself learns to be (and by extension, we do, too). I’ve gone on about Minor Mary at more length than the character merits solely because it’s a telling fault: The show’ll go for the laugh, not the humanity. And certainly not the restraint.

So one can’t help but feel that Hamill and Schultz have also been headstrong and heedless. For this adaptation’s exuberance, they’ve sacrificed much of what makes Austen Austen.