Skip Navigation
Home > ArtandSeek.net > If An Actor Can Memorize ‘Hamlet,’ He Can Remember Where To Keep His Hands

Chicago theater actor-activist Laura T. Fisher spoke to a standing-room-only crowd of more than 120 North Texas theater artists Monday in the Arts Mission Oak Cliff. She’d been invited to explain how over the past year and a half a group of some two dozen Chicago stage companies developed and signed on to their own code of conduct designed to protect non-union theater members from sexual harassment and other forms of inappropriate behavior and abuse. Fisher is coordinator of what’s known as the Chicago Theatre Standards. The code of conduct came out of the #NotInOurHouse movement  — of which Fisher was a co-founder with Lori Meyers. #NotInOurHouse was triggered by an angry Facebook outburst in 2015 by several female performers against a famously tawdry theater company, and that post was soon followed by an extensive expose of sexual harassment in the Chicago Reader. This was all pre-Bill O’Reilly, pre-Harvey Weinsten.

Joanie Schultz, artistic director of WaterTower Theatre and a friend of Fisher’s, invited her to Dallas because of simmering problems with sexual harassment in North Texas  – problems that broke out into the open with last week’s dismissal of Lee Trull, director of new play development and former casting director at the Dallas Theater Center. Several women came forward in a TheatreJones story — some anonymously, some not – alleging repeated incidents when Trull propositioned them or implied he might trade future casting considerations for sexual attention. Monday’s meeting was originally developed as a workshop session with just a dozen area theater leaders (all members of the nationwide Theatre Communications Group) — the kind of session Fisher has done in other cities, including at the Public Theatre in New York. But that idea quickly expanded and — to the concern of some theater leaders who’d not signed on to such a public event and feared possible issues of safety and security — it became Monday’s town hall meeting.

Fisher explained that the Chicago Theatre Standards do not address criminal or legal issues. If an actor is physically or sexually assaulted, she said, that is a matter for the police, period. And the code itself is not a legal contract. It’s not a list of “don’ts” — “I don’t want to be the Chicago theater cop,” Fisher said.

Rather, she called the code a “cultural agreement” — an agreed-upon list of behaviors and procedures designed to improve the theater community as a whole and protect individual artists. Each theater would post their agreement to follow it – for each show – and everyone in the production signs off on it: actors, tech crew, director, interns. Fisher gave the example of one of the code’s recommendations: All stage scenes involving physical or sexual contact need to be worked out beforehand and agreed-to by all parties involved. She pointed out this is little different from the safety procedures followed for fight scenes. No actor simply throws punches or is just handed a weapon and allowed to start swinging. A fight choreographer goes over safety procedures, practices them with performers and then carefully works out movements and sequences and ‘safe words.’

The code is entirely voluntary. Perhaps its most important enforcement mechanism is a “chain of responsibility” spelled out for each show. This is the list of  people – including their phone numbers and emails – to address the kinds of issues of harassment or misbehavior spelled out in the standards. If a performer, for instance, feels a stage hand has been harassing her, she can contact, say, the stage manager. If the stage manager does nothing, then the performer proceeds up through the chain of names — all the way to the artistic director and board members, if necessary. Sometimes, Fisher said, all that’s necessary is a talk by a superior explaining that such behavior will not be permitted. Many people, she argued, simply do not know that what they’re saying or doing is wrong. Times change, . What was permitted — or simply let slide — ten years ago will not pass muster anymore.

But code enforcement has proved to be more than just talk: Fisher said, in one instance since the standards were put up and agreed to, an actor was dismissed from a show. 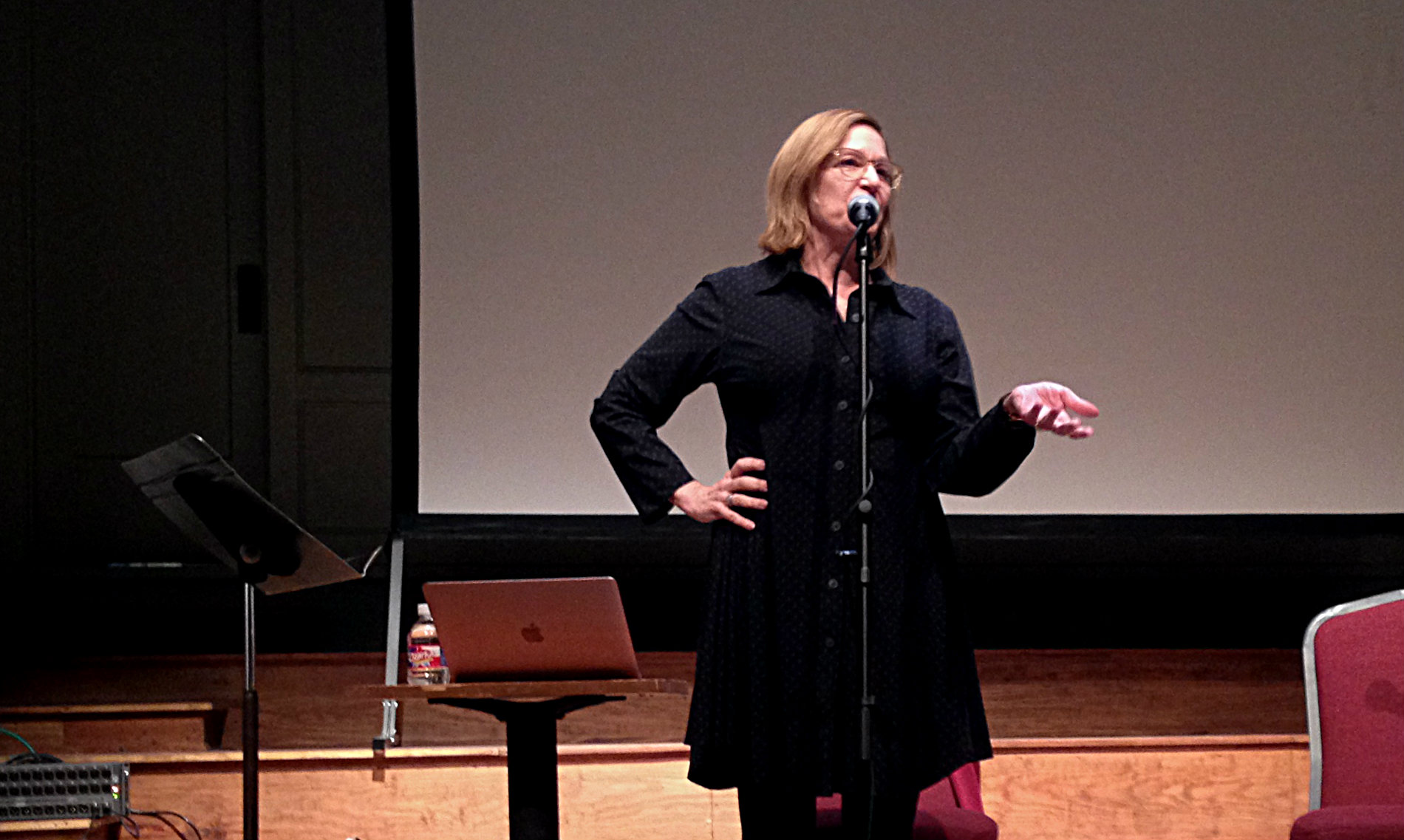 Some 25 Chicago companies have agreed to the code — out of a possible 250, although Fisher laughingly admitted it’s difficult to know just how many theater companies there are in Chicago on any given day. But she was hardly discouraged by the fact that only 10 percent of the city’s stage companies are compliant (or have agreed to be so). The code is brand-new; it existed online officially in ‘draft’ form for more than a year, permitting anyone to suggest additions and corrections. Which is why it’s a downloadable, 32-page document covering everything in a show and everything over a typical season from initial casting call to final ‘strike’ (dismantling of sets and lighting).

Today, Fisher announced, was the first day the term “draft” was finally removed from the online version. That does not mean the code is now carved in stone. She fully expects it to be changed as times change, as new situations arise that hadn’t been considered.

In our increasingly sexualized culture and in our post-Weinstein, post-Franken world, Fisher said, people often object to such a detailed spelling-out of permissible behaviors and responses. It all sounds too sterile, too complicated (and Fisher conceded that improv comedy troupes have a certain amount of leeway for obvious reasons). But she said, the code does not specify an actor cannot, for instance, touch a woman’s breast — if that’s what the scene calls for, if that’s what the directors and actors agree to, the code says nothing against it.

As for being too complicated, Fisher quipped, “If an actor can memorize ‘Hamlet,’ he can remember where to keep his hands.”

But just as the Chicago code was born out of rage, the North Texas community has been inflamed by recent events. The WaterTower’s Joanie Schultz prefaced the two-hour event by cautioning, “This is not a forum for accusations of wrongdoing.” She understands the hurt and the anger, she said, but she urged attendees that in the Q&A session following Fisher’s talk, the meeting shouldn’t devolve into “shaming or blaming.”

But although the Dallas Theater Center was not expressly named, both the DTC’s artistic director, Kevin Moriarty, and its managing director, Jeff Woodward, were present, and towards the end, several members of the audience defended “calling out” people responsible for either sexual harassment itself or simply ignoring it, letting it continue. That the Chicago standards have no “regulatory body,” no punitive enforcement mechanism, was also a point of contention — in Chicago originally, Fisher said, as well as with some in Monday’s audience. Fisher argued that the code is designed to encourage better standards. And therefore, doesn’t it make sense that theater artists will start avoiding those companies that fail to adhere to its safety standards?

In effect, just as the creation of the code was a communal effort, so is its enforcement.

In an interview immediately after the town hall, Fisher said that North Texas is clearly early in the process of dealing with the entire, ugly, complicated issue of sexual harassment, and she fully sided with people’s anger. It’s part of the process, she said. But the process can’t simply end with accusing individuals or firing them — if the aim is to elevate the overall quality and safety of theater practice going forward. The Chicago code is just a promising tool. She sees three ways forward, Fisher said. North Texas can adopt the code or adapt it in response to local sentiments, local situations.

Or North Texas can go through what Chicago did and devise its own criteria, its own procedures.