The fourth annual Dallas Arts Week is next week, and today, Mayor Mike Rawlings held a press conference to promote the effort. Promoting Dallas arts is clearly one of his favorite official activities. More than 100 cultural events will be offered this year, including the Dallas Art Fair and the 20th anniversary of the Dance Planet festival. The mayor also used the occasion to introduce Jennifer Scripps, the new director of the city’s Office of Cultural Affairs. 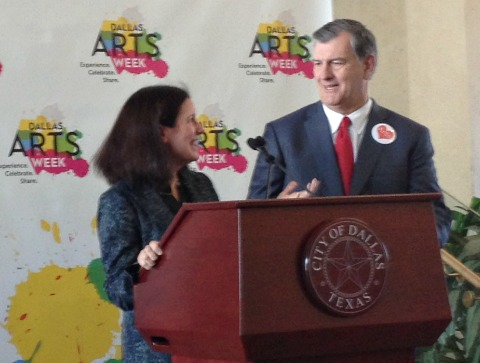 “You can’t yell at her right now,” he warned the press, “because she’s not getting paid. She’s just coming over here for fun.”

The mayor said the theme of this Dallas Arts Week is education in the arts, and that will be the topic for the Creative Conversation held Monday at Dallas City Performance Hall. That’s the mayor’s annual public discussion on the arts. So the mayor called up to the podium the high school students who’d recently won the Young American Talent visual arts contest.

“Where are they? Come up here!,” he said, as the teens slowly gathered around him. “It’s so much fun to see young talent. And look,” he said, addressing them directly, “you can go off to college and do more great art. But come back, come back to Dallas! Your parents need you, OK? And we need you. We want to be a place that great artists, writers, theater people, want to come and perform. Arright?”

How to attract — and keep — professional artists in Dallas happened to be a topic of a previous Creative Conversation.

You can find a full roster of Dallas Arts Week events here.