Skip Navigation
Home > ArtandSeek.net > It’s Not The Oak Cliff Film Festival. At Least, Not As You Know It.

Every day on Art&Seek, we’re talking to people who have tips on art in the time of social distancing.  Share yours with us on Facebook, Instagram, or @artandseek on Twitter. Click above to listen to Barak Epstein, organizer of the NOT The Oak Cliff Film Festival, share his tip with KERA’s Nilufer Arsala.

NOT The Oak Cliff Film Festival happens on Thursday, June 4, at 8 p.m. Get tickets at nottheoakclifffilmfestival.com

“Instead of newer films, we’re actually highlighting short films from filmmakers we’ve featured before,” said festival organizer Barak Epstein. “The hour-long program will be followed by a live-streamed Q&A with the filmmakers. We hope this will be a fun evening of virtual togetherness.” 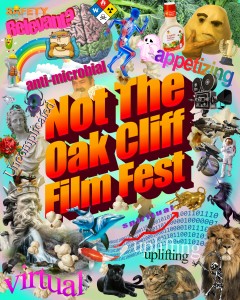 Image from The Not the Oak Cliff Film Festival’s website.

The OCFF looks to the future, though. 2021 will be its 10th anniversary of celebrating film and hopes to be bigger and better than ever. Keep an eye out for updates on the festival’s Facebook page or website.