It’s International Women’s Day, and The Kimbell Art Museum in Fort Worth is celebrating by unveiling a new acquisition. It’s a still life by an 18th Century French painter named Anne Vallayer-Coster.  And it’s only the third work by a woman in the museum.

The painting is called Still Life with Mackerel, and the overflowing table suggests a delicious dinner to come. Two fat fish lie on a linen cloth. There’s glassware, an orange blossom, lemon, and bread.

“There’s a luxuriousness about it,” says Eric Lee, director of the Kimbell. “It reflects the interest in the late 18th Century in a simple yet luxurious life.}

Anne Vallayer-Coster was known as a colorist.  A silvery light infuses the painting, and one item in particular provides a clear display of her talent.

“I think she especially captured the colors of the mackerel,” Lee says. “They change almost like a rainbow. And you see blues and purples and pinks. She really captures that extremely well.” 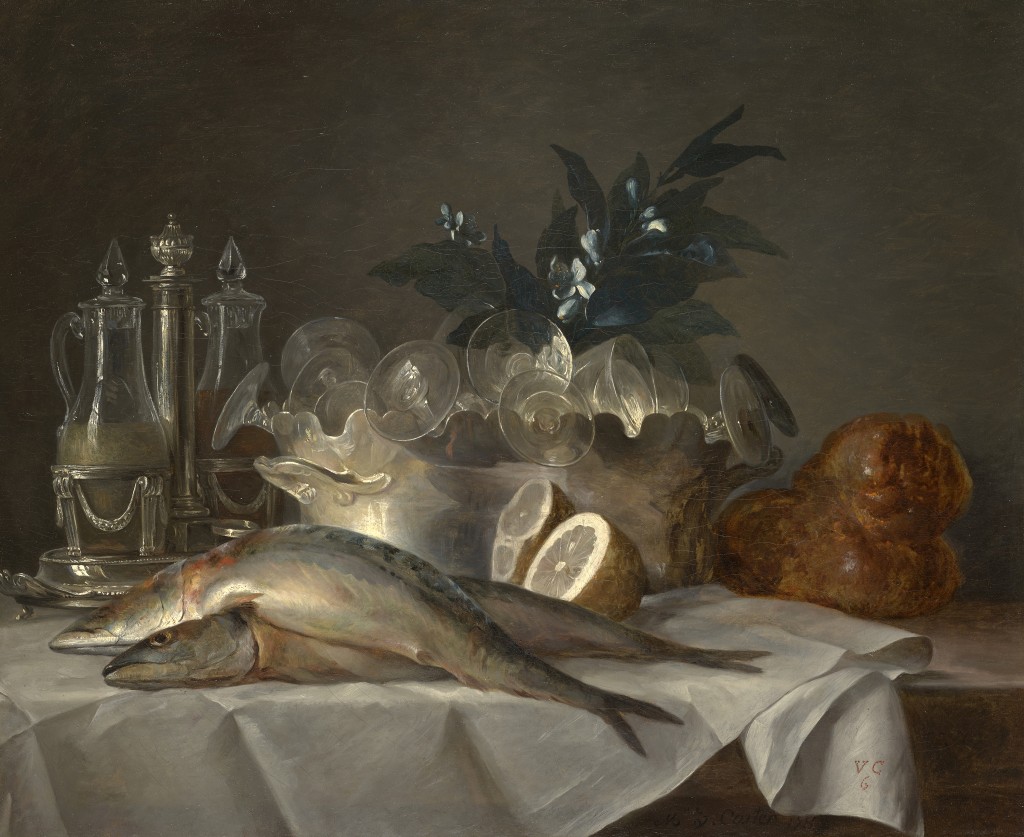 Joining the Academy meant her work would be shown in the most prestigious exhibitions. That, and a winning personality, helped her attract patrons. Including Marie Antoinette.

“Her patronage was very important and contributed further to Vallayer-Coster’s renown in 18th century Paris,” says Lee. “She was considered the foremost still life painter in France during the last quarter century.”

Despite her relationship with the young queen who would die on the guillotine, Vallayer-Coster survived the French Revolution.

“That’s really amazing to me,” Lee says. “Perhaps that’s because her paintings didn’t seem that political. And so there was nothing especially controversial about them.”

“After her death, her fame diminished and during much of the 20th century she did not have the recognition she had during her lifetime, but that is definitely changing,” says Lee.

Art historians and museums began taking a new look at Vallayer-Coster in the 21st century. There was a show at the Dallas Museum of Art, the National Gallery of Art in Washington, the Frick Collection in New York.

The Kimbell’s collection is confined to works before the mid-20th century. So it’s full of antiquities that can’t be attributed to an individual artist. Still, this acquisition means the museum now owns only three works definitely by women.

“Prior to the 20th century you did not have large numbers of women artists,” says Lee. “And actually, I think we had more women artists than we realized, they just didn’t receive the recognition.”

That is changing, Lee says.

“We should look at the social conditions and  institutional conditions that made it very difficult for women to become great artists during earlier periods.

And we should also look at art history because I think art history has written out many major women artists, like Vallayer-Coster. In recent decades, we have art history departments, art historians, museums, that are looking at overlooked women artists from the past.”

The piece is also only the third still life at the Kimbell. Lee attributes that to the interests of the Kimbell’s early board and staff. And to the works they could purchase.

The museum acquires only one or two pieces a year. So Lee and his colleagues are looking for masterworks. Vallayer-Coster’s still life fits the bill.

“It’s first of all one of her finest paintings. There’s no question about that. But there’s also a quiet simplicity about the painting that seemed to fit with our collection so well.”

When they first hung Vallayer-Coster’s still life in a gallery at the Kimbell, Lee says it absolutely sang.