Services for Margaret McDermott are Tuesday morning at the Meyerson Symphony Center. Lee Cullum is a veteran journalist and host of “CEO” on KERA TV. She offers this appreciation.

“The way she used her mind and her opportunity make her unforgettable.”

Lillian Clark, an art collector, once said that about another collector, Patsy Nasher. She could have said the same thing about Margaret McDermott, the great patron of European painting and so much else, who once gave a Mondrian to the Dallas Museum of Art  in Clark’s honor. 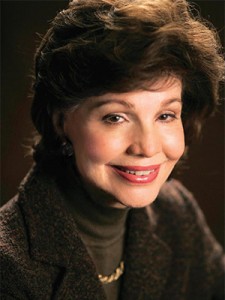 The operative word in that quote is “mind.” We all know about  the vast opportunity that accrued to Margaret McDermott in the fortune of her husband, Gene, one of the founding trio of Texas Instruments, along with Cecil Green and one-time Mayor Erik Jonsson. Gene McDermott  used to warn her that giving away their money intelligently would be  harder than making it in the first place.  She took that to heart and applied an elegant mind and sound judgment to all her philanthropies.

She didn’t fall for  flattery, though it was flattering, no doubt, when word came that Britain’s Prince Charles would like to meet with her. What did he want? Funding from the McDermott Foundation to restore the Globe Theater in London, where Shakespeare’s plays could be properly produced. That meeting never happened, as far as I know. Margaret McDermott was not one to lead other people on to disappointment.  But she didn’t ignore the request completely. The first time I went  to the Globe, to see “Henry V,” as I recall, it was startling  to see a plaque on the back of my seat that acknowledged the generosity of the McDermott Foundation. I felt the same surprise when I first encountered Green College at Oxford. That TI band of brothers and their wives were everywhere, and none more than Margaret McDermott, the last of those happy few. 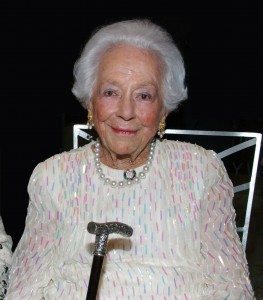 We sometimes fail to realize that the reason fabulously wealthy people stay wealthy is they don’t mind asking the price of things. When Margaret commissioned Santiago Calatrava to create a grand table and chairs for a special setting at UT Southwestern Medical School, she made a point of inquiring,  “May we know the price?” He didn’t say no, but he didn’t come up with a number either.

Finally, multiple pieces arrived, far more than originally requested, all spectacular and wonderfully original, of course. But they couldn’t fit into an elevator to their destination on the fourteenth  floor and  had to be hoisted by crane through a window which, naturally, had to be broken. The bill for all of this? Definitely substantial, but the works by Calatrava are elegant, and they have brought pleasure to Margaret McDermott and her friends, as well as friends of the medical school.

Her fans remember her now as curious, charming, kind,  never insisting on her way with the institutions she supported. All that is everlastingly true, but she never hesitated to speak her mind when she felt it was necessary, as once she did when we were both much younger. Ada Louise Huxable, then the formidable architecture critic of “The NewYork Times,” was in town to speak at the library. I was on the same program and, in a fit of righteous sentimentality,  made some ill-considered remarks about the sadness of tearing down a  ramshackle part of El Centro downtown  to accommodate needed new construction for the school. Margaret was founding vice chair of the Community College board, and she was not pleased. She summoned me to lunch at her house to explain, nicely but firmly, how wrong I was. She even invoked the name of her husband and the view he would take of the matter, something  I suspect she seldom did unless the issue was especially important and the person to be persuaded exasperatingly off-track. Certainly I left impressed, and converted.

I’ve been a believer in Margaret McDermott ever since. The way she used her mind and her opportunity make her indeed unforgettable.

NOTE: The McDermott Foundation has provided support to KERA.