At NorthPark Center, a historic orange army of more than 120 glistening statues of women in STEM-related careers stand tall. 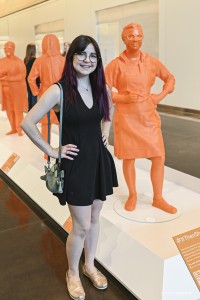 Among them is Myria Perez. Her statue depicts her wearing a lab coat and holding an air scribe, a tool used to chip at rock.

“I’m a fossil preparator,” she said. “And so my job is to unearth fossils from what we call matrix or rock around the bone or fossil. So I use a variety of tools to prep away this rock and dirt.”

Perez has always been obsessed with dinosaurs. When she was a kid, her mom frequently drove her an hour to the Houston Museum of Natural Science. There, she fell in love with fossils. Now, she teaches other kids the same sense of wonder at the Perot Museum of Nature and Science.

“It doesn’t feel real,” Perez said. “To see this exhibit, because back in 2019, we knew about this plan, and having it actually be there, and it’s here and everybody’s statues are up, you can interact and learn more about each person’s story.”

Listen to Myria Perez on the impact she’s making as a paleontologist.

The groundbreaking project is called #IfThenSheCan – The Exhibit. It comes from Dallas-based Lyda Hill Philanthropies and the American Association for the Advancement of Science. Together, their initiative is called If/Then, and it’s produced the largest collection of life-size statues of women in one place.

The exhibit was created to show kids — girls especially — all the ways a career in science, technology, engineering and math could look. 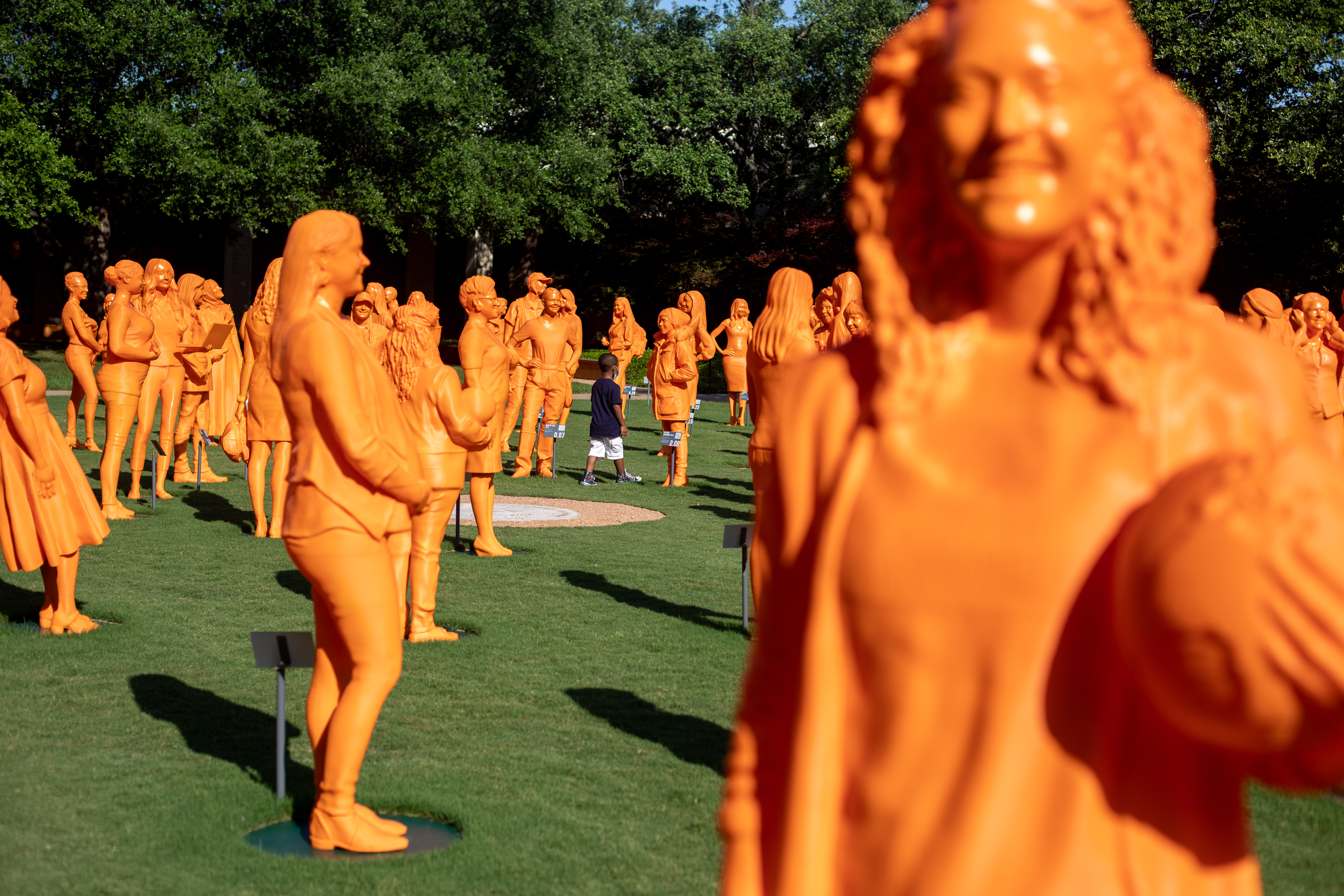 A child weaves through the #IfThenSheCan – The Exhibit at NorthPark Center in Dallas on June 18, 2021. Photo: Keren Carrión

That’s one of the reasons why Jennifer Stimpson wanted to be a part of the initiative and exhibit.

Listen to Jennifer Stimpson talk about how she went from a DEA chemist to a science teacher and what she hopes young people take away from the exhibit. 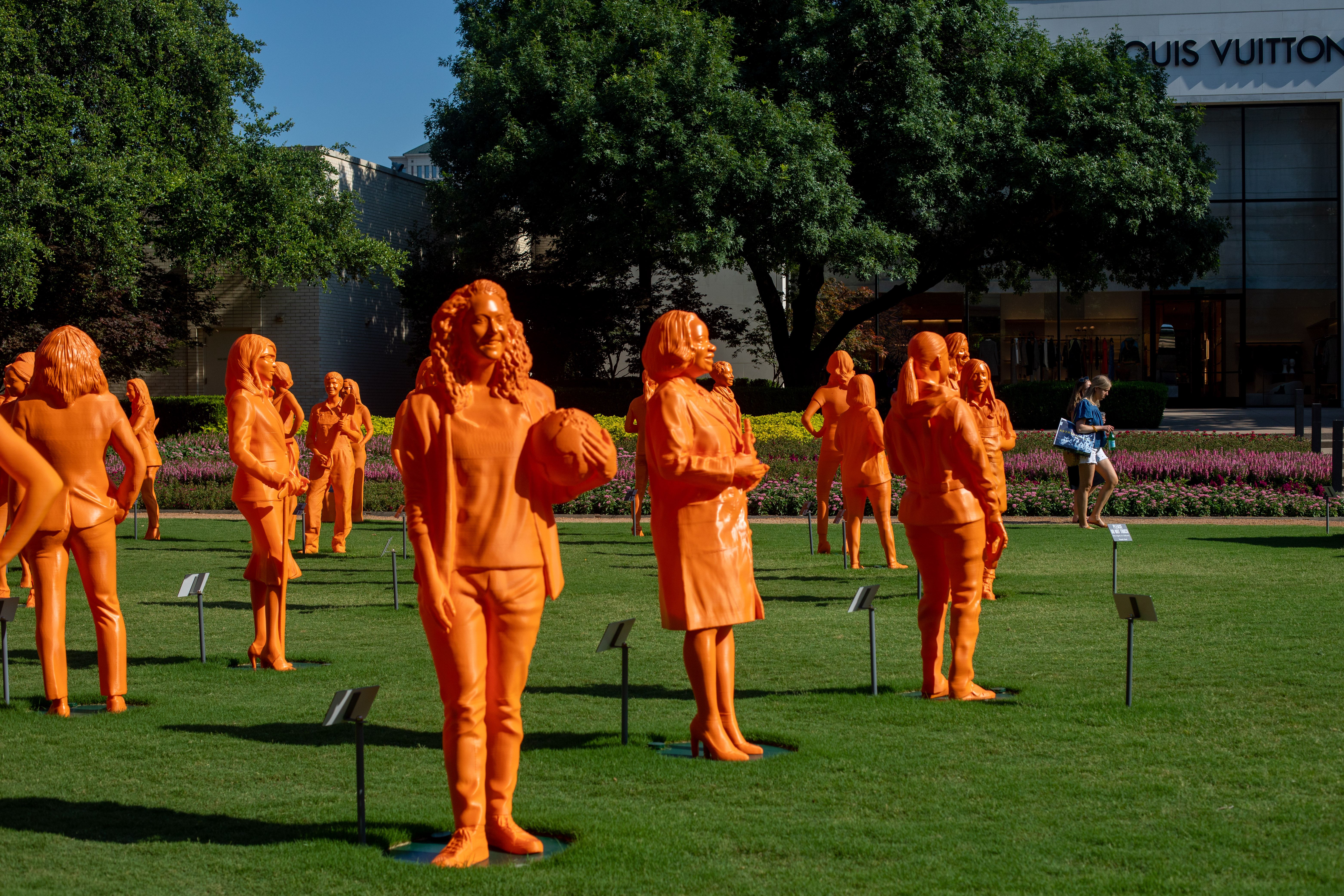 The #IfThenSheCan – The Exhibit is on display at NorthPark Center in Dallas. Photo: Keren Carrión

Stimpson is a teacher, a current legislative fellow for the U.S. House of Representatives in Washington, D.C. and a former chemist for the Drug Enforcement Administration. 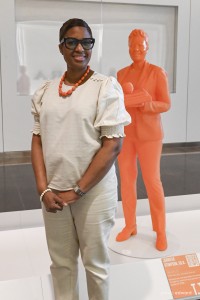 She inspires middle school kids by building connections between science and practical, everyday life. She calls it “blue-collar science.”

“And that is looking at science in your everyday community,” Stimpson said. “So you get your nails done, there’s a whole lot of chemistry going on in the color pattern, the glue that’s used…”

Stimpson gets her practicality from her father, “Stimp.” He was her first inspiration.

Growing up, Stimpson spent her summers in his pharmacy in West Dallas.

“Lots of times people have a hard time taking tablets,” she said. “So he would make a version of it orally, so that way, you can take it as a liquid. Or if he couldn’t take it as a liquid, because you would have some reflux issues, he might make a topical medication for you.”

“He taught the community how to know what their why was so that they could make themselves, hold themselves accountable for taking better health and not have to go to the ER for just small infractions,” Stimpson said. 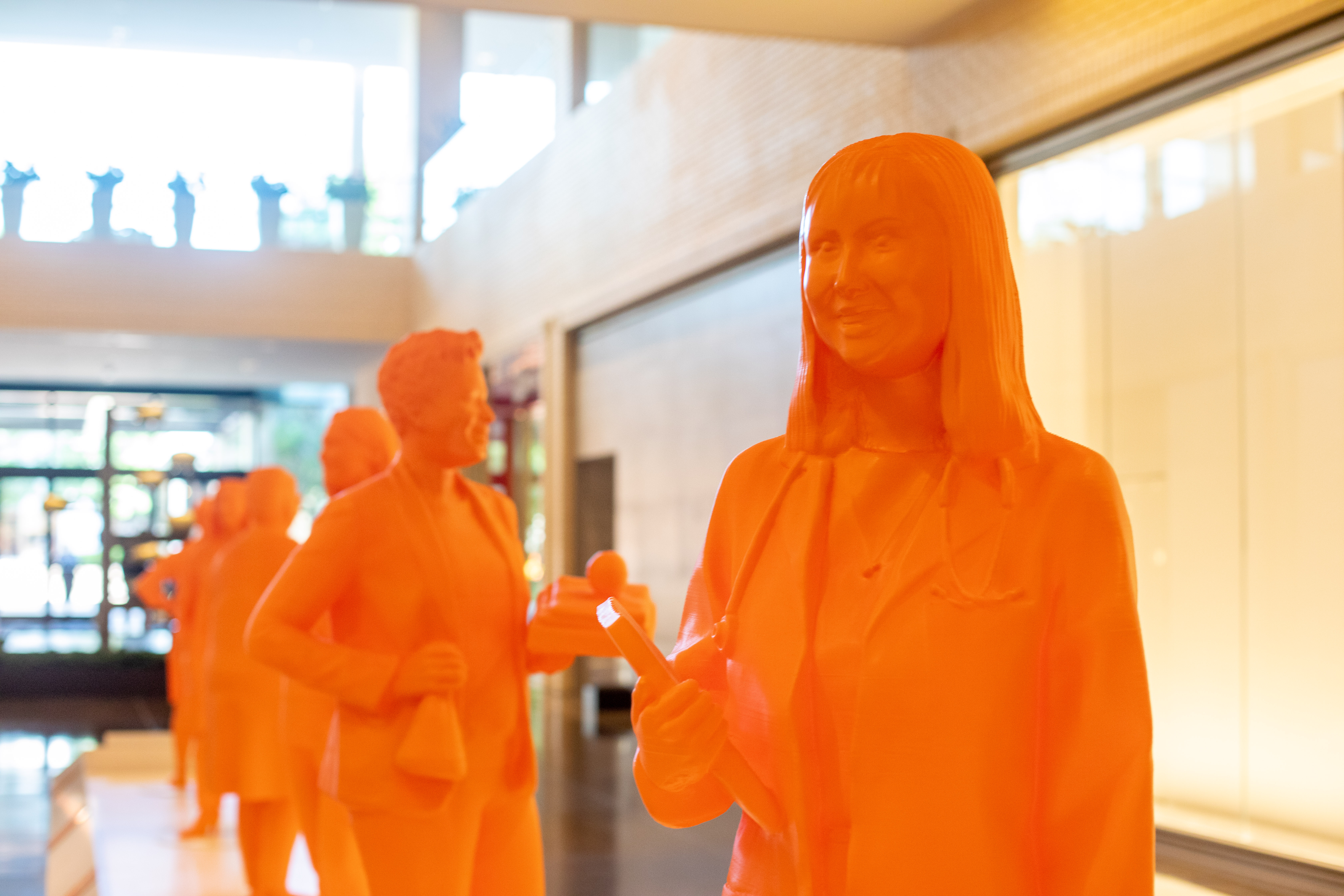 The statues — and the initiative behind them — also speak to a larger truth: women and women of color are vastly underrepresented in STEM fields.

The latest research shows that women in 2019 made up 27% of STEM workers, despite women making up nearly half of the workforce in America, according to the U.S Census Bureau.

Listen to Nina Niu Sanford on what the #IfThenSheCan – The Exhibit means to her. 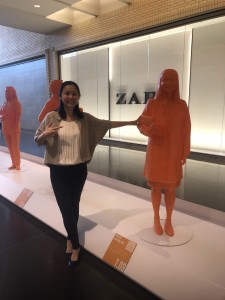 “There’s still a huge lack of female physicians and leadership positions, even though medical school classes are about 50% women,” Sanford said. “The proportion of women in the higher ranks, particularly, of academic medicine, is very small. So there aren’t that many people to look up to at that level.”

Sanford immigrated to the U.S. from China at age 3. Her mom was a physician in China. Her mom then moved to the U.S. and became a researcher. But she missed patient interaction and had to retrain and re-do her residency to be a doctor in the U.S.

Sanford watched her mom stay up for hours each night. The grueling nights studying and sacrifices were something she also experienced, but the good of helping others always outweigh the negatives, she said.

Because of her experiences of being a woman in STEM, Sanford sees mentoring as a big part of her job — because women are more likely to go into a STEM career if they know someone, have a role model, family members, friends and teachers to encourage them.

And the initiative is helping her do just that.

If Then, She Can 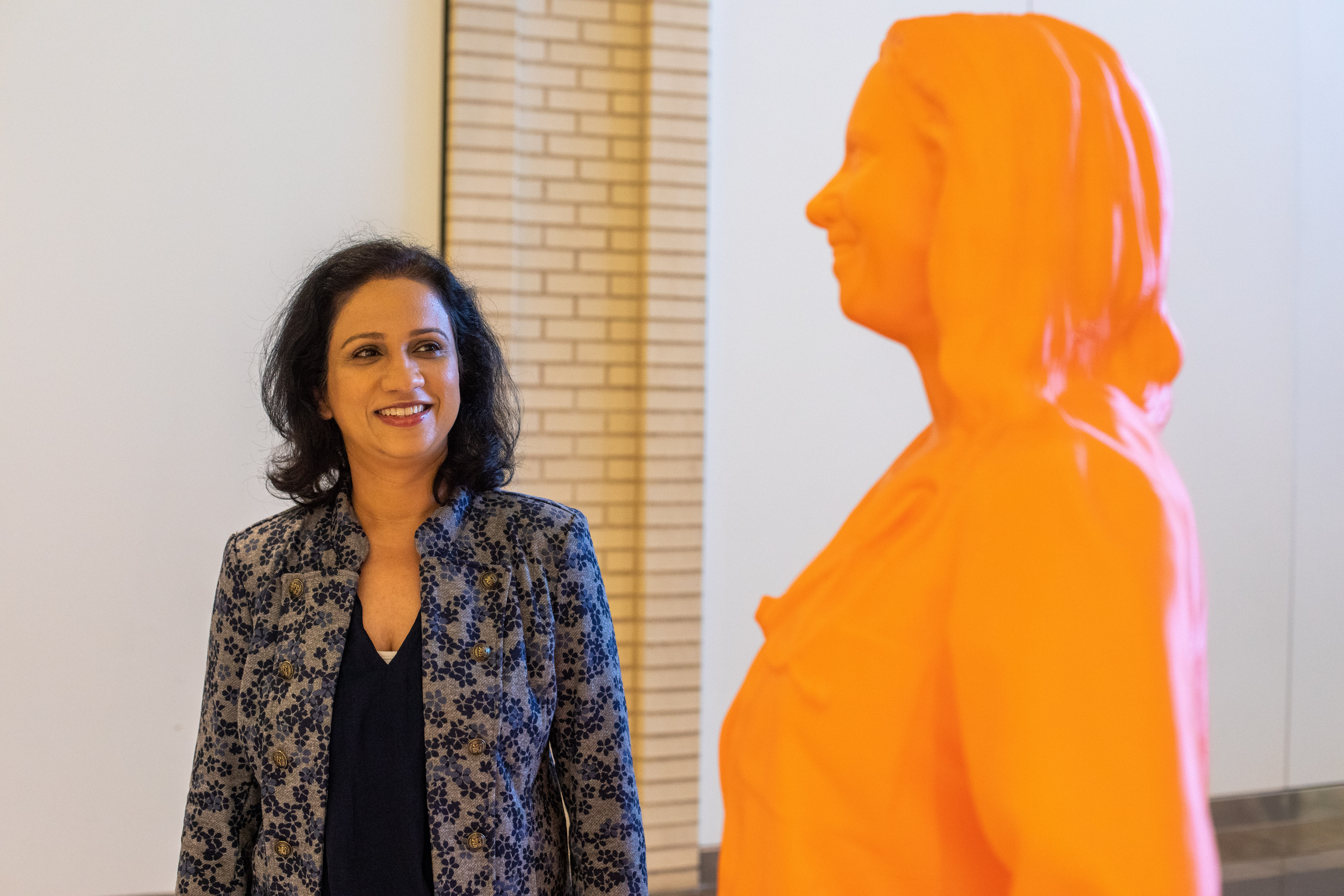 Julie Mirpuri looks at the 3-D printed statue of herself, which is part of the #IfThenSheCan – The Exhibit. Photo: Keren Carrión

Already, Dr. Julie Mirpuri is noticing a change. She first saw her statue when the exhibit opened in May.

Listen to Julie Mirpuri on taking care of babies in the NICU and how the exhibit is making an impact on young people. 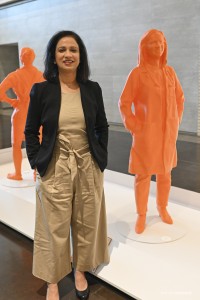 “Actually there were young people in the mall with their parents going to the statues. And I heard a mom talking to her kids and the daughters were asking, you know, what does she do? And what does she do, and she was describing the different career paths.”

Mirpuri is a neonatologist who takes care of sick and premature babies in the neonatal intensive care unit or NICU. The smallest baby she worked on was 350 grams, just under a pound.

Her statue gave her goosebumps. Not because she was seeing herself, but because she’s a part of a movement making an impact on young people.

Mirpuri can’t wait to see how many kids will join STEM careers because of the exhibit.

Because, as the initiative’s mantra goes: “if she can see it, then she can be it.”

The exhibit is on view at NorthPark Center until October 24.