Dan Jian immigrated from China when she was 19. Today, she teaches drawing at TCU — and was just appointed, along with three others, to the Carter Community Artists program of the Amon Carter Museum of American Art in Fort Worth. The program aims to support local artists and — as the museum moves to more in-person programming — get their input on its offerings. 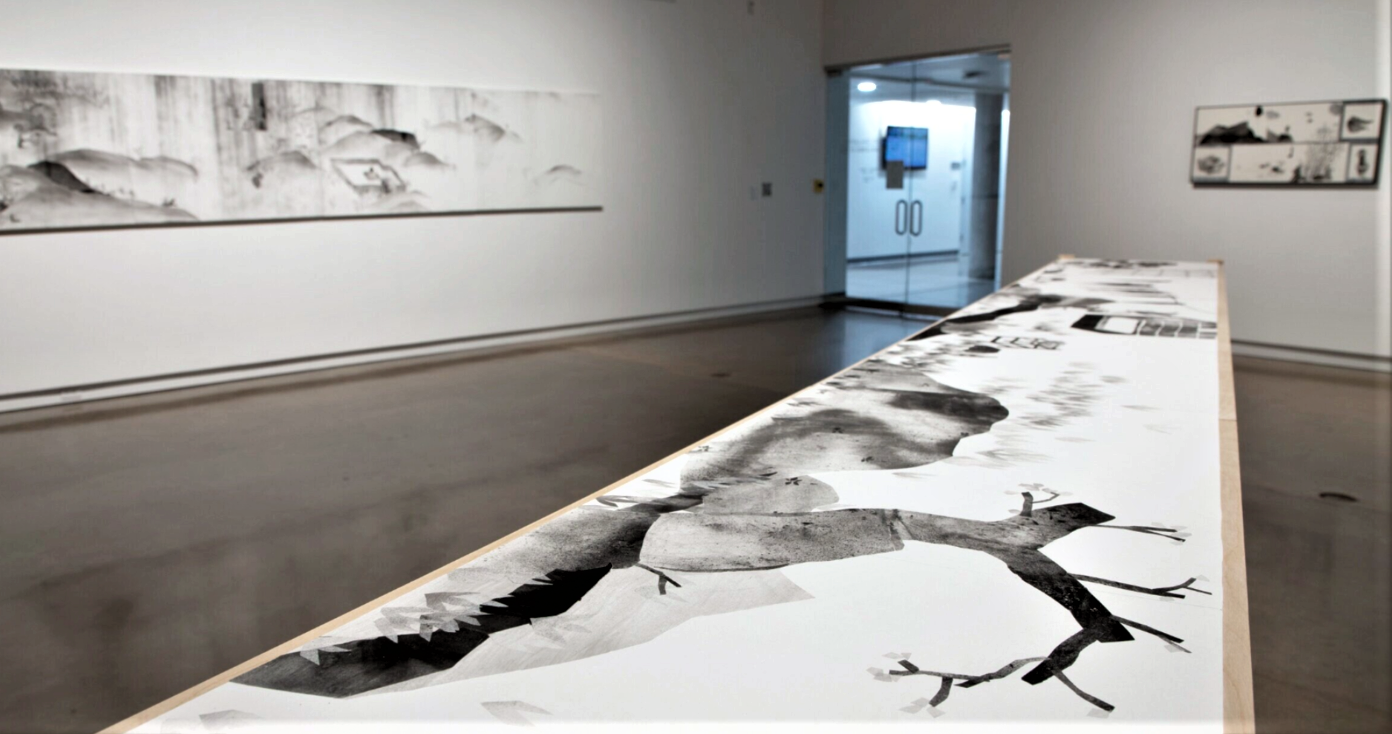 Installation of Jian’s works in Moudy Gallery at TCU: “Flowers in the Mirror” (near) “And Dust to Mountains” (far).

Initially, Jian said, as an artist in America, she was captivated by what she called the “messiness” of abstract expressionist painters like Jackson Pollock and Cy Twombly. But now she uses charcoal dust to create landscapes and animations that recall the contemplative calm, the open spaces and isolated figures and animals often found in traditional, Chinese landscapes — specifically, a genre known as “literati painting.”

Jian said that good artists are all about connections. Her appointment by the Amon Carter is a kind of triangulation: She hopes to make connections between the museum’s holdings, a wider audience and her own artistic pursuits.

“I think of this as an opportunity,” she said, “to both advance my research connecting Texas landscape to this tradition of Chinese painting and facilitating, like, a real-world connection between people from Texas and community members that are from different backgrounds.”

Jian said she hopes to develop workshops and other events that will bring people to the Carter — and bring them new insights into the art there.

The four Carter Community Artists for 2022:

Dan Jian is a visual artist who works across painting, drawing, and animation. Originally from the mountain region of Hubei, China, Jian came to the United States at the age of nineteen and started her education as a math major in a community college. She received a BFA from Temple University in 2012 and an MFA from Ohio State University in 2016. Jian currently lives in Fort Worth, Texas, and is an assistant professor of art at Texas Christian University while maintaining an ongoing studio practice. Jian’s solo and group shows have been exhibited nationally across the U.S. and internationally in China, Italy, and Korea. Her awards and endorsements include a recent RCAF project grant from Texas Christian University, Certificate of Merit from the Philadelphia Watercolor Society, and an Arts and Humanities Research Grant at Ohio State University. She is also a residency alumnus of Ragdale Foundation, Vermont Studio Center, Virginia Center for the Creative Arts, Kimmel Harding Nelson Center for the Arts, and was a finalist for the Don Bachardy Fellowship in London.

Calder Kamin
Artist, educator, and advocate, Calder Kamin transforms trash into beautifully crafted creatures and opportunities to change cultural perceptions of waste. She’s engaged thousands of museum visitors through her public workshops and art projects including the Crystal Bridges Museum of American Art, the American Museum of Natural History, Women & Their Work, the DoSeum, i.d.e.a Museum, Utah MOCA, and the Contemporary Austin. Kamin starred in an episode of the PBS series Arts In Context and in two Disney Channel commercials sharing inspirational messages about creative reuse, and she serves on the board of Austin Creative Reuse. She lives with her pup, Pixel, in Fort Worth, Texas, in her current post as Artist in Residence for American Landmark Apartments. Kamin holds a double BFA in ceramics and art history from the Kansas City Art Institute.

Dr. Mary Nangah
Dr. Mary Nangah is an Instructor at Texas Christian University, School of Art, Art Education department. Originally from Cameroon, she earned an MFA in 2009 from Parsons, the New School for Design in New York. Mary completed her PhD in art education in 2015 at the University of North Texas, Denton. Her pedagogy is grounded in post-colonial studies and critical multiculturalism to foster art education that is critically cognizant, inclusive, and equitable. In her work at TCU, Nangah is a Diversity Equity and Inclusion (DEI) faculty advocate for the College of Fine Arts, working to support students, faculty, and staff in facilitating DEI initiatives. As an artist, Nangah’s paintings critically inquire concepts of authenticity, mimicry, ambivalence, and otherness of African aesthetics. Her work has been shown in local exhibitions including at the Madeley Gallery in Conroe, Texas, in the TCU School of Art Faculty exhibition at the Moudy Art Gallery, at the Moncrief Cancer Institute, and in the Refresh Exhibition and the Mansfield Public Library. When she’s not teaching or making art, she enjoys cooking delicious West African meals.

Rachel Nash
Rachel Nash is a native of Oklahoma City and came to Dallas to study studio art, art history, and psychology at Southern Methodist University. After graduating from SMU, Nash moved to Chicago to pursue an MA in art therapy from the School of the Art Institute of Chicago. She returned to Dallas in 2010 and became a licensed professional counselor and art therapist. Nash has worked at The Art Station, a non-profit art therapy clinic in Fort Worth, and has experience working in both group and individual settings with children and adults. She resides in Dallas and is currently focused on her own art making. She is interested in the process of making art, incorporating writing as a way to push her own art, and in the stories that come from this process. She primarily uses oil paint but is always exploring new materials. When she is not in her studio, Nash is likely somewhere outside spending time with her three little boys and husband.