Nancy Schaeffer is in the unenviable position of taking over a theater – right when COVID is messing with everyone’s future. We caught up with the newly appointed artistic director of Dallas Children’s Theater when she was overseeing a special holiday celebration.

On a recent Saturday morning, families in cars – with children who have special needs – cruised around DCT’s parking lot.

“Hello! Good morning!” The clown duo Monday (Dick Monday) and Slappy (Terry Riley) greeted a mini-van as it drove up.

The clown duo of Monday (Dick Monday) and Slappy (Terry Riley) fight over their hats – because who wouldn’t? – to the delight of children going through the DCT’s Ho-Ho Holiday Drive-Through. Photo: Jerome Weeks

Instead of the typical drive-thru winter wonderland with blazing lights and carols, this is a gentler, daytime attraction. It’s what’s called “sensory friendly.” This way, children, many on the autism spectrum or with Down’s syndrome, won’t be overwhelmed by noise and flashing bulbs. Instead, at different points along the route, masked performers dressed as elves sing or joke with the kids. At one point, Monday discovers his partner, Slappy, has stolen his hat.

“Where’d my hat go? ” — and the children in the mini-van giggled because his hat was clearly sitting on Slappy’s head. He was shocked — shocked, I say — to discover this: “She has my hat on!!”

The performers also made sure to check  with parents and children to see how the children were faring and to assure them. The stopping points and performances became touching: It was like a shopping-mall Santa’s Village but one carefully parceled out around the parking lot — and with concerned, friendly performers not going full-on Broadway but instead, as far as social distancing permitted, achieving moments of connection through car windows.

The Ho-Ho Holiday Drive-Through was written, cast and directed by Nancy Schaeffer. Officially, she’s been the Children’s Theater’s head of education since 1988. But actually, she’s been directing, acting, choreographing and teaching practically since Robyn Flatt founded the company in 1983. Flatt hired Schaeffer, a theater-and-dance graduate from Western Kentucky University, second — after she’d already hired Nancy’s husband, Karl Schaeffer, because of his own abilities as a jack-of-all trades.

Schaeffer said she has no problem with all the hats she has to wear: “That means I’m running from a budget meeting into a rehearsal,” she said. “But I like that. I don’t wanna do just one thing.” 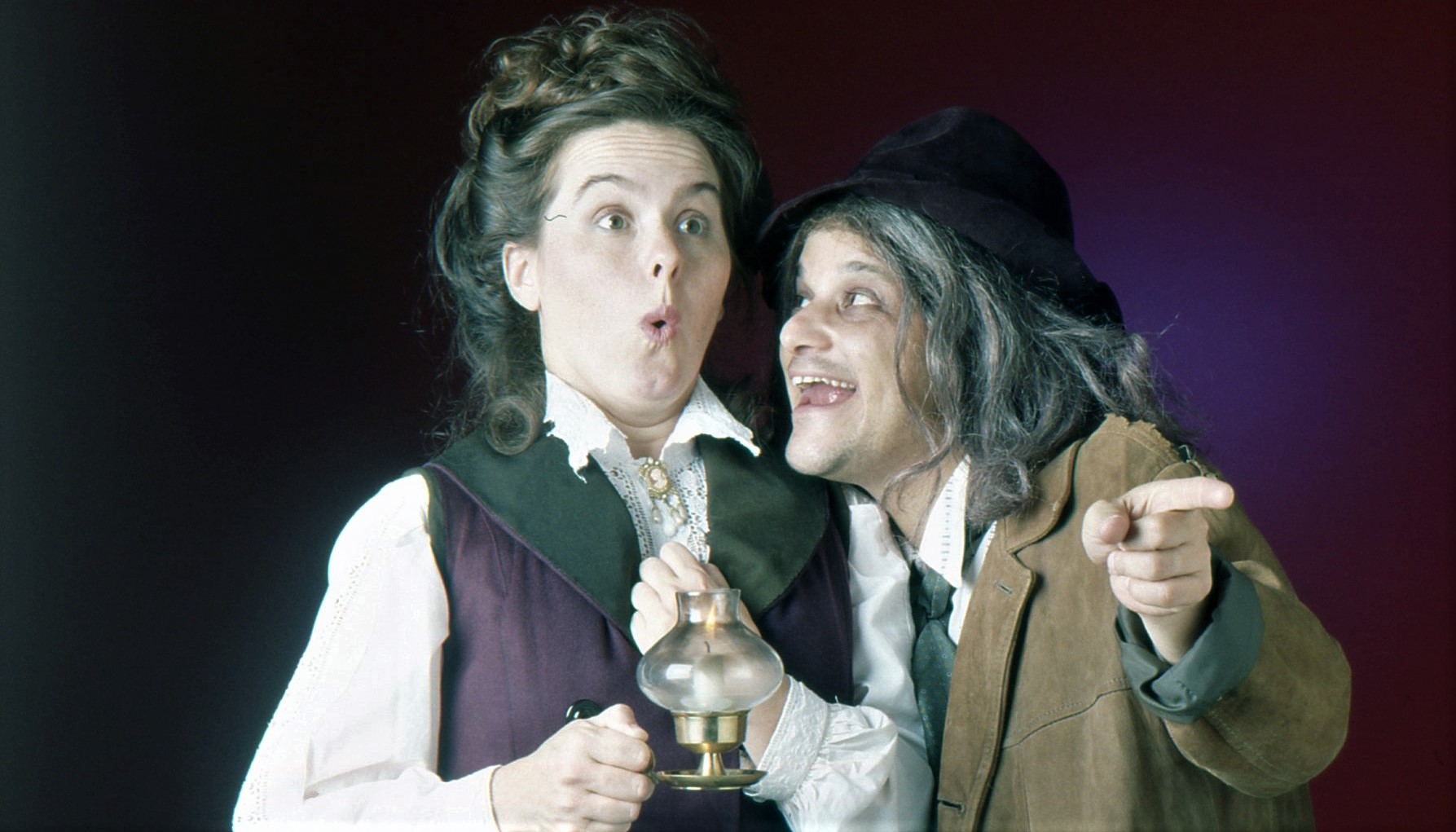 Nancy and Karl Schaeffer in ‘The Curse of Castle Mongrew’ from DCT’s 1993-’94 season. Photo: Robin Sachs

Still, in North Texas, for a major arts organization to promote the educational director to the position of artistic director is rare. Schaeffer may be the first.

But the promotion makes perfect sense at DCT because, while lots of arts groups offer classes and educational programs, here, children are the main audience, the prime responsibility. So education goes hand-in-hand with entertainment.

Or it should, said Schaeffer. She takes both children’s education and children’s entertainment seriously — something she learned from Flatt.

“We don’t throw junk up because it’s for kids,” Schaeffer said. “I can remember, early days — this was when we did shows at El Centro — Robyn, she wanted a light in a certain place, and some technician, he said, ‘[sighs] This is just for kids.’ And we all just stepped back while she very firmly explained that it’s because it’s for children, it’ll be the best thing you ever did.

“And let’s put that light where it needs to be.”

A typical DCT season offers stage adaptations of playful, popular children’s books like Goosebumps and Pinkalicious. But it’ll also have dramas about bullying or dyslexia or transgender kids. And then there are all the theater camps and classes on offer.

Lisa Lee and her son, Palmer, enjoyed the holiday drive-through this morning. In fact, when Palmer comes to DCT, it’s like a reunion. Lee explained not only has he seen plenty of shows there, he’s a long-time member of the Blue Pegasus Players. That’s the educational program designed for special-needs children.

“A lot of the staff involved with Blue Pegasus are actually actors from the shows,” said Lee. “So the first time the kids came up for their first class, they felt comfortable because they saw all the familiar faces.”

Right now, DCT offers what many parents are desperate for: quality entertainment and education for their kids stuck at home. But it’s precisely live theater and live schooling that’s become extremely difficult to deliver — because of COVID. Over the years, the Children’s Theater’s YouTube channel has put up more than 300 videos: sneak peeks, musical numbers, how-to guides. This year, Schaeffer also shifted all the classes online.

“Running those virtual classes,” she said, “it’s a lot of work, and it’s so different because it’s Zooming. But we’ve had 200 kids in our virtual classes this fall. We had about 400 this summer.”

Before COVID, the DCT classes were reaching up to 4,000 children per year. Worse, the pandemic seriously cut into another program — one that, among North Texas’ many theater companies, only DCT offers: Since 1996, the theater has produced nationwide tours of children’s shows.

So the company’s revenue streams have been seriously reduced. But it’s not just the money, Schaeffer said. As with most arts groups, it’s the uncertainties, the inability to plan that’s such a headache. When will school field trips return?

“We’re participating in massive surveys and analyses,” she said. “So we know people will want to come back to the theater when it’s safe. But you know, is the model going to change? Will people still buy season tickets?”

Fortunately, the future does offer Schaeffer at least one welcome certitude. The DCT began in Withers Elementary School in 1983. But since 2003, the DCT has been housed in a 50,000-square-foot building on a prominent, 6-acre site along Northwest Highway. It may well be one of largest children’s theater facilities in the country.

For the first time in its 37-year history, the Dallas Children’s Theater will own its home.