Art&Seek is highlighting new music from North Texas every Thursday. Click above to hear me talk with artist Juno Uno for our Music Minute, which airs on KERA FM and KXT 91.7. For more North Texas music, tune in to the KXT Local Show at 7 p.m. on Thursdays. And tell us what you’ve been listening to on Facebook, Instagram or @artandseek on Twitter. 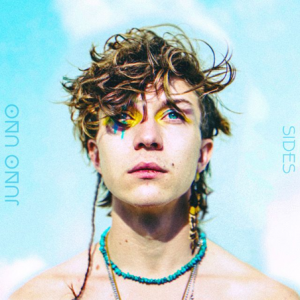 Things seem to have fallen into place for 21-year-old Juno Uno. After a stint in Austin and some time spent exploring, Uno returned to his hometown of McKinney to build a studio and work on his music. A trip to the store The Groovy Coop led to a meeting with owner Katie Scott, who also owns music store and record label Red Zepplin Records. After hearing his demos, she quickly signed Uno to her newly founded label.

“I realized that you can make a whole world with electronic elements, just like you can with acoustic guitar and vocals, just a larger world, because we have all these tools at our disposal, so we might as well use everything we have,” Uno said.

Uno brings part of that larger world to his new song, “Sides,” which is the first release from the Red Zepplin label. The sounds of synths combine with electric guitar and drums provided by veteran drummer Jeff Ryan (St. Vincent, Baptist Generals, Motorcade, Pleasant Grove). Uno’s airy voice adds to the mix to produce a sound that is consistent with how Uno describes his music, which is “higher self-communication.”

Uno says the song has more than one meaning.

“’Sides’ is half a love song, which is about how real love is completely out of our control… it comes from somewhere else, but somewhere that’s completely here,” Uno said. “And the other half is a social commentary about the recent global zeitgeist of psychic expansion. That being a growth in mysticism worldwide that I feel like everyone is experiencing.”

Uno says that both of these things flow together because love is the glue of the universe, and the more we learn to love, the more we open our minds to what the universe has to offer.

Uno plans to release an album called Bloom in 2021. Keep up with new releases and performance updates on Instagram.