Skip Navigation
Home > ArtandSeek.net > Not A Bad Day For Down Under

It was the first Cliburn piano competition – ever, of any kind – to be held outside of Fort Worth. And Shuan Hern Lee was the first Australian, ever, to win any Cliburn contest, amateur, professional or junior.

After four rounds of competition over nearly two weeks among 23 young pianists, Lee won the second Cliburn International Junior Competition Saturday evening at the Meyerson Symphony Center in Dallas. The sixteen-year-old did it with a knuckle-banging rendition of that well-worn warhorse – and still an audience favorite – the Rach 3. Lee’s performance of Rachmaninoff’s Third Piano Concerto was chosen by the six Cliburn judges over Eva Gevorgyan’s performance of the same composer’s Rhapsody on a Theme of Paganini and JiWon Yang’s playing of that other competition showpiece, Tchaikovsky’s Piano Concerto #1. All three played with the Dallas Symphony Orchestra, conducted by Ruth Reinhardt.

Along with their trophies, Lee won $15,000, while the runner-up, 15-year-old Gevorgyan from Russia/Armenia, won $10,000, plus the $500 critic’s choice award (voted on by press members attending the final performance), and 17-year old Yang of South Korea took third place with a $5,000 cash prize. Each finalist also receives $2,000 scholarships from the Fort Worth Piano Teachers Forum – money that must be spent toward furthering their musical advancement. The top prizes also include residency and mentorship opportunities with the Cliburn. Contestants for the junior competition are all 13-to-17 years old, while 18-to-30-year olds play in the original Cliburn International Competition. Led by pianist Alessio Bax, the six judges voted in a complicated, ranking process that included the young prodigy’s scores over all four performances in the quarterfinal, semi-final and final contests 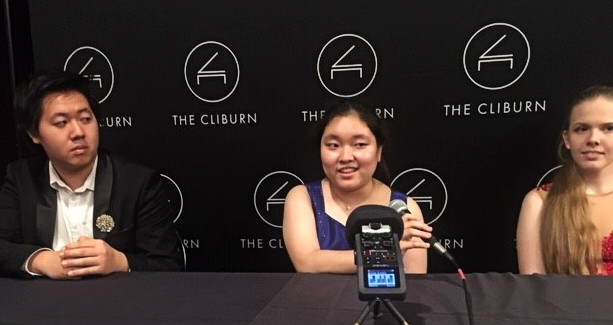 One of four Americans to compete, Avery Gagliano, 17, of Washington, D.C., won the audience award, voted on by more than 5,000 online viewers of the live streaming performances. In his speech Saturday, Cliburn CEO Jacques Marquis said, up to that evening,  more than 500,000 people from nearly two dozen countries around the world had watched the Cliburn performances via live streaming.

He also said the decision to move the junior competition to Dallas for only its second iteration was “a leap of faith.” It’s one he plans to do again in four years.