The latest play at the Dallas Theater Center is about an unusual friendship – between Muhammad Ali and the actor Stepin Fetchit.  In this week’s State of the Arts, I talked to playwright Will Power about the show, called “Fetch Clay, Make Man.”

Muhammad Ali was the heavyweight champion of the world, one of the most famous figures of the 20th century. But these days, some people may not know the actor Stepin Fetchit.  Can you explain why their friendship was an unlikely one?

Stepin Fetchit was a character created by an actor by the name of Lincoln Perry in the 1920’s. And he was a phenomenal actor and his idea was to create this kind of bumbling buffoon in Hollywood, because that was really what was open and available to African American actors at that time.

And his idea was he was going to create this character to break into Hollywood. But of course, given the times and situation and how popular he was for mainstream white America, he was never able to evolve out of that role.

And so by the time he comes around in the 1960’s, his public persona was almost the opposite of Ali’s at that time. He was looked at as someone you don’t want to touch, as an embarrassment. And Ali was looked at, at least by young people, as the proud black man, the person who is very vocal, expressive. Never backs down, very courageous. 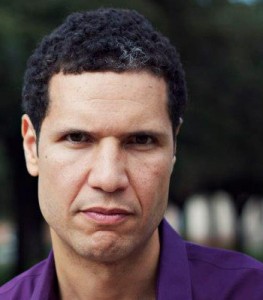 And so that’s what made their friendship so unique. Because their public personas seemed to be in almost violent contrast to each other.

Sure, and what brought them together, do you know?

The legend goes that Stepin Fetchit was the only person left alive who knew the great boxer Jack Johnson,  who was like, one of the first African American heavyweights, and someone who was really strong in his persona and really controversial.

And so Muhammad Ali called him into his camp and wanted to know the  secrets. And so that’s what was said. And then, when Muhammad Ali, of course,  knocked out Sonny Liston the second time, and really solidified his championship, he said he got the knock out punch from Stepin Fetchit, who learned it from Jack Johnson.

Now that may not have been true.

What originally drew you to that relationship? Is it the fact that they were so polar opposite?

That was pa rt of it, but the other thing is that I have a personal connection in a way, because I grew up in a very Afro-centric, pan-Africanist family in the 1970’s. So I had a lot of revolutionaries and ex-revolutionaries in my family. So I  was taught about Stepin Fetchit, that Stepin Fetchit was the Antichrist. He was the worst thing that a black person can be.

By the ’70s, everyone was in love with Ali. He was an American hero. That’s how I experienced those two icons early on.

And so, maybe 9 or 10 years ago, I saw this picture of them, together. Stepin Fetchit and Muhammad Ali. And I was like, “How could this be?!”

And that sparked this journey back to find out what was the relationship and what were the struggles between these two men.  Between them, and also them coming together to struggle against the outside world.

What can we learn from these two men today?

It’s interesting because the struggles of Stepin Fetchit, and even the Stepin Fetchit character, still exists now. And so anytime an African American artist, or anyone, is asked to do something stereotypical. Anytime they come across some kind of racism in office, like, “Hey how ya doin? Yup, yup, up.” Anything like that, they’re hearkening back to the things that Stepin Fetchit struggled with. But he also perpetuated the stereotype.  So I think those things are still really relevant

And of course, Muhammad Ali, I feel like it’s important particularly for milennials and people of younger generations, to see Muhammad Ali as a young person, struggling and trying to come to terms with who he is. A lot of times when we show American heroes, we show them having already figured it out, or older and accomplished.

But we don’t show them as struggling. This piece in a way is about how he became Muhammad Ali. This is like the foundation.

And so I think it’s important to see the heroes not as perfect, but as real people, with fault, with mistakes, with courage and with cowardice, trying to struggle, in hopes that we can kind of be inspired and understand that,  OK, I don’t have to be perfect to still fulfill my goals and stay on my path in life.