On a chilly October weekend, big white papier-mâché skulls are scattered around a backyard in north Dallas.

Around them, artists and organizers with Cara Mía Theatre are busy making mojigangas, 12-foot-tall, hollow puppets that will be worn by marchers during the parade later that week. The artists hold newspaper, glue and brushes. There’s a distant sound of a drill and chatter in the background.

“We are trying to talk about who has been the people there on the first line, risking their lives for all of us,” said Frida Espinosa-Müller, the Mexican artist directing the group.

Espinosa-Müller has modeled the puppets after essential workers, activists and healthcare workers.

The Día de los Muertos or Day of the Dead march taking place in Dallas in about a week is a chance to honor the more than 18,000 people who have died from COVID-19 in Texas. Organizers are also stressing the disproportionate impact the virus has had on the Latino community. 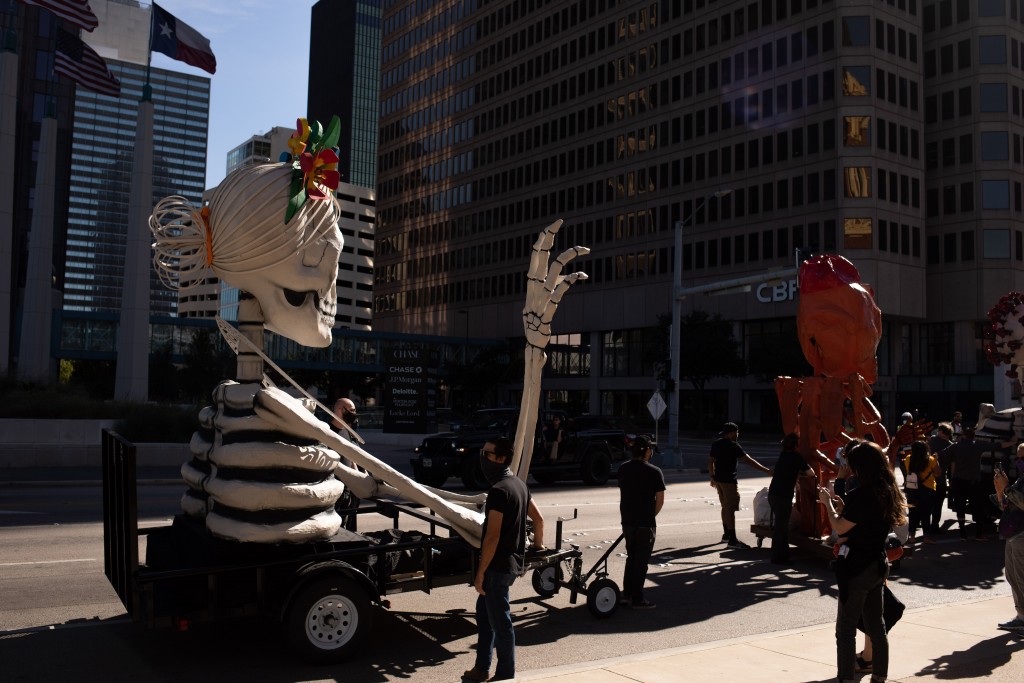 “I think we all have lost someone. It’s important to keep them alive. We all have someone. We all know about someone,” said Linda Lopez, a Dallas artist helping create the mojigangas. “We can’t be present at their funerals and things, so for me, this is how I can give and show that I do care about them.”

On the other side of town in Oak Cliff, Giovanni Valderas, a 42-year-old Latino artist, is putting together an untraditional float for the caravan. His calavera or giant skeleton is modeled after President Donald Trump. It will be painted red-orange, and money bags will sit all around the float’s base.

The Trump calavera will wear a bright red hat that resembles the MAGA hat and reads “IT’S NOT MY FAULT.”

“Our federal government has not only messed up but also caused a lot of mistrust,” said Valderas. “So, for me, it’s hinting towards him [Donald Trump], it goes back to the government’s inability to take care of American citizens.” 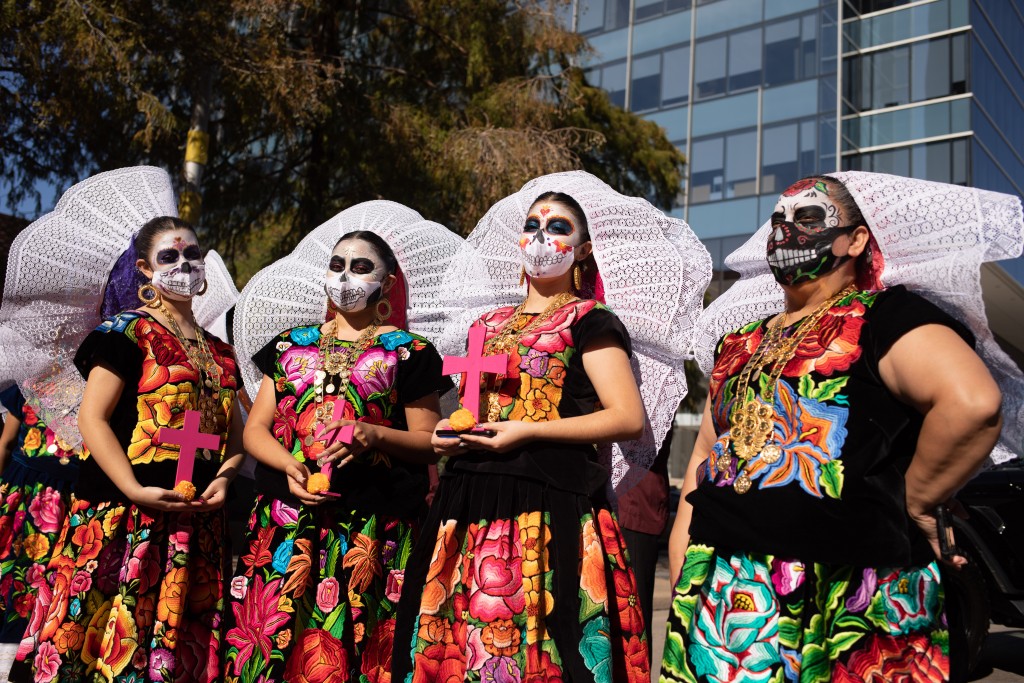 Participants of the event are decked in traditional folkloric clothing and headdresses to honor the Day of the Dead in downtown Dallas on Sunday, Nov. 1. Photo: Keren Carrión

Politics Infused With Day Of The Dead

Criticizing the government on a day meant to honor the dead is not a new thing, something expressly political that’s b een added to the Mexican traditions. Historically, Día de los Muertos has had deep political roots.

One of the holiday’s most iconic images, la calavera catrina, was created in the early 1900s by Mexican illustrator José Posada. The elegantly-dressed skeleton lady was an indictment of Mexico’s upper class at the time.

“I think that when we look at Mexican and Chicano customs, and especially communal and cultural practices,” David Lozano said, “when we get together, even if it’s for Christmas for a pastorela or a posada, even in those practices, politics is infused. So, it’s the same with the Days of the Dead in Mexico.”

David Lozano is Cara Mía Theatre’s artistic director. And because of this history, it was only natural for Cara Mía Theatre to team up with a civil rights organization for the march: the League of United Latin American Citizens or LULAC.

“This is a matter of life and death, and we need to get a response from our national government because people are hurting,” said Domingo Garcia, president of LULAC.

This parade was LULAC’s opportunity to make a powerful statement.

“We want to bring attention to the powers that be,” said Ramiro Luna-Hinojosa, a community organizer with LULAC. “That they need to act in a more humane manner, but also bringing attention to our people about the seriousness of the situation and making sure they’re taking care of themselves because we are on the front lines.”

A Celebration Of Life And Sorrow

On Sunday afternoon, the sun shone bright on the crowd gathered in downtown Dallas outside the Cathedral Guadalupe — gathered to see the spectacle.

Church bells chimed at 2 p.m. signaling the parade was about to begin. Among the crowd were dancers wearing ornate, multicolored headdresses and matachines dancers beating on drums.

Cara Mía Theatre’s giant skeleton puppets mingled with organizers who led marchers on the 20-minute walk to Dallas City Hall and a caravan of cars with Mexican flags and colorful banners followed.

“I have many friends that their families have passed away from it. I am here to honor them and their families. Some of them didn’t get a chance to say goodbye,” said Juan Guerrero, 39, who rode along in his ’99 Chevy Tahoe. 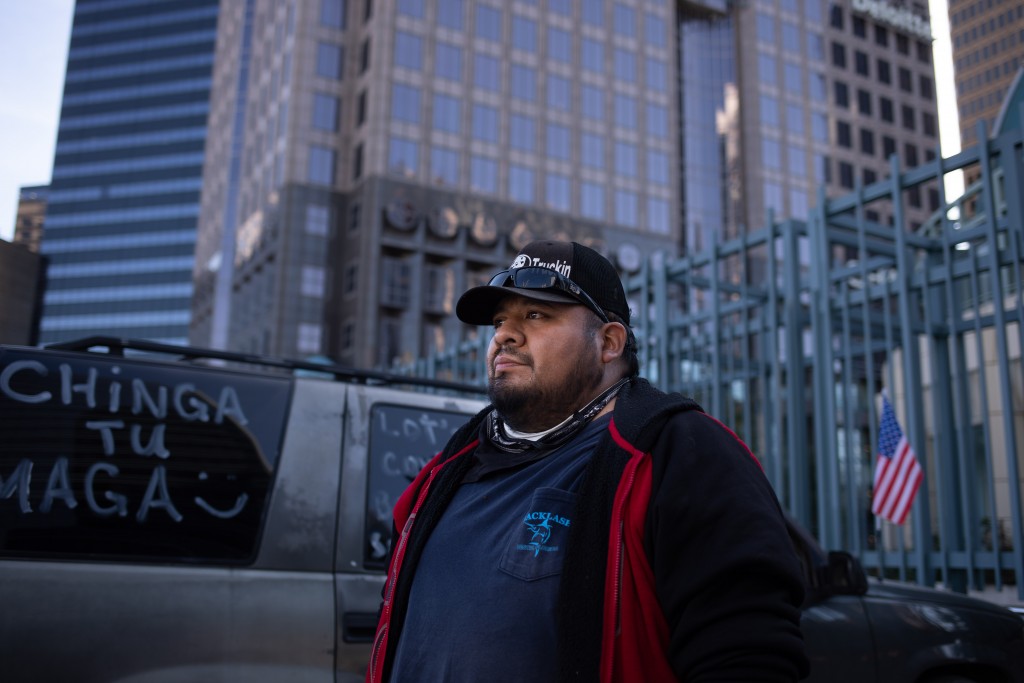 Juan Guerrero poses in front of his car, decked with Mexican flags and with writing condemning the Trump administration for its handling of the pandemic. He was in the Day of the Dead parade and protest in downtown Dallas, on Sunday, Nov. 1. Photo: Keren Carrión

Guerrero, who’s an essential worker, contracted COVID-19 in August and was sick for two weeks. He wrote messages on his truck like ‘Lots of Lives Lost’ criticizing the Trump administration for its handling of the pandemic.

“If this is the greatest country in the world, why wasn’t there a quick response?” asked Guerrero.

At the event, Dallas resident Yulissa Madrid stood next to a community altar and shared the story of her great-uncle Eugelio Madrid with the crowd.

“He caught COVID-19 and was misdiagnosed. It angers and frustrates me because as an illegal coming to this country, he worked so hard to get where he wanted to for all of us,” said Madrid.

Madrid, who’s from El Salvador, lost her great-uncle in August. She didn’t grow up with the Day of the Dead holiday, but her family adopted it in Texas and hold it close to their hearts.

The event brought mixed emotions for marchers and organizers. It was a celebration of culture but also a grim reminder of the damage the global pandemic continues to inflict on people — especially the Latino community — everywhere. 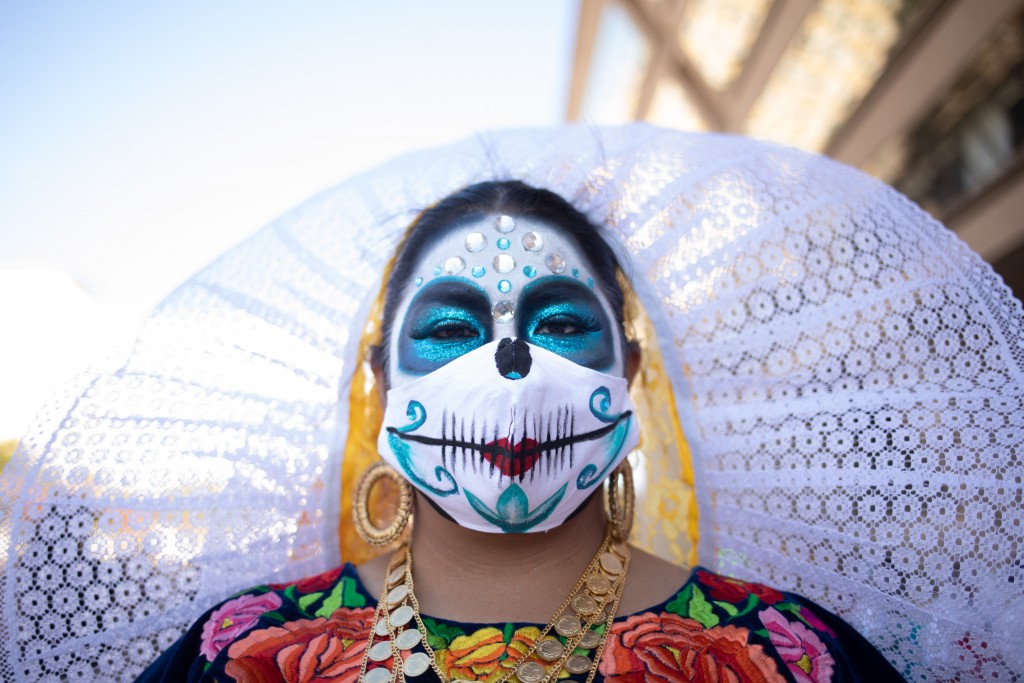 Because of the pandemic, Yveth Varillo, 33, wears a mask with her Day of the Dead makeup. Photo: Keren Carrión

KERA News is made possible through the generosity of our members. If you find this reporting valuable, consider making a tax-deductible gift today. Thank you.