Artist Mark Dion spent months traveling around Texas, collecting bones, plants, tools, plastic toys. He gathered all these items and organized them for a sizable art installation at the Amon Carter Museum called “The Perilous Texas Adventures of Mark Dion.”  Although the Amon Carter is currently closed, KERA TV is airing Erik Clapp’s documentary following Dion’s progress around Texas. KERA’s Jerome Weeks tagged along with Dion when he hunted for artifacts in Fort Worth.

We’re in a car headed for a funky antique shop, where Mark Dion hopes to find some interesting stuff. It’s July 2018, and Dion’s been tracking several travelers who came to Texas more than 150 years ago – he’s following them from Galveston to West Texas, from San Antonio to the King Ranch.

This is the biggest project the New York artist has ever done – in terms of sheer driving miles. Which is odd – because as a well-regarded artist-collector-chronicler, Dion doesn’t even drive. Other people drive him around. 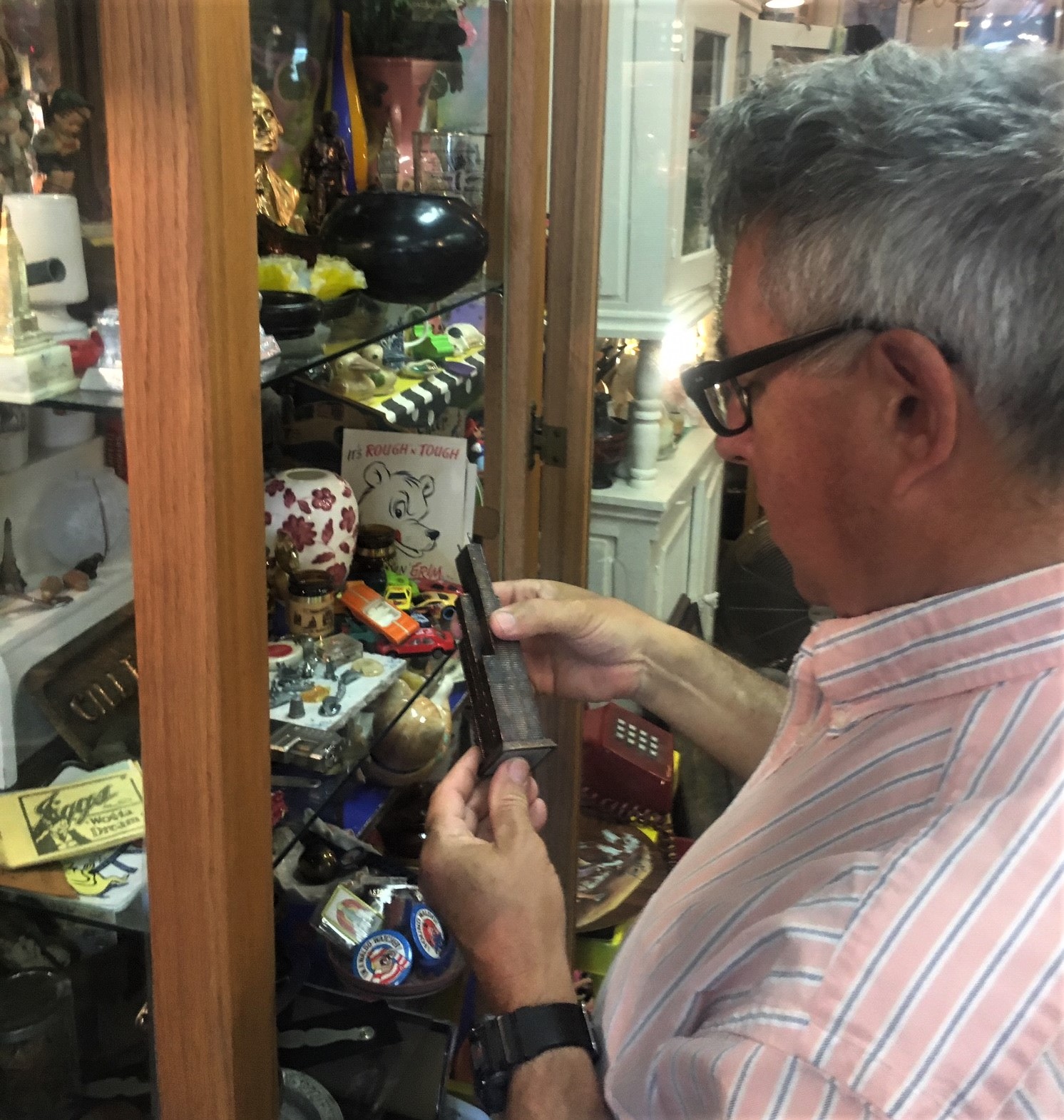 At Junker Val’s in Fort Worth, Mark Dion examines a tourist memento of the Sears Tower in Chicago. Nope, not Texas enough. Image: Jerome Weeks

We hear a voice as we enter Junker Val’s on Bluebonnet Circle in Fort Worth (“You know you’re in the right place.”) Maggie Adler steps in and declares, “Oh yeah, I like it.”

Inside Junker Val’s, loud fans push the hot July air around as Dion and Adler immediately disappear behind counters and clothing racks. Adler is the Amon Carter curator whose idea it was to commission Dion to take this trip, to follow after people like John James Audubon, the famous painter of birds. Audubon visited Galveston and the Gulf Coast in 1837. Then there’s Frederick Law Olmsted. Before he designed New York’s Central Park, Olmsted was a travel writer, and in 1857, he wrote the book “A Journey through Texas, Or a Saddle-Trip on the Southwestern Frontier”

“What I really want to do,” Dion explains, “is shadow their methodologies. So I’m looking at them with the full knowledge of many things that have happened inbetween now and then, and I’m also looking with my own eye.”

There’s plenty for Dion’s eye at Junker Val’s. It’s stuffed with stuff. But if Dion’s not secretly hoping to uncover a lost Audubon painting here and if he’s not trying to re-create these old journeys like some Civil War re-enactor – what’s he looking for?

You know he had to make a visit. Image: from ‘The Perilous Texas Adventure of Mark Dion’ by Erik Clapp

“This is a project about my trying to understand what this thing called Texas is, right?” he says over the hum of the fans. “And so, I’m definitely looking for things I wouldn’t find in an antique store in Connecticut, you know? I wanna find things that are uniquely of this place.”

And we’re not talking about Texas tourist clichés like cowboy boots or cattle brands. Over the years and through plenty of vintage shops, Dion’s developed an eye for the distinctive, the revealing remnant. While spending months being driven around Texas, he shipped dozens of boxes back to Maggie Adler and her colleagues at the Amon Carter. Inside are stuffed birds, photo albums, coyote skulls, an antique baby carriage and —

“A lot of pieces of plastic trash,” says Adler, “bottle caps, corks, botanical specimens and soil samples from all over Texas.” 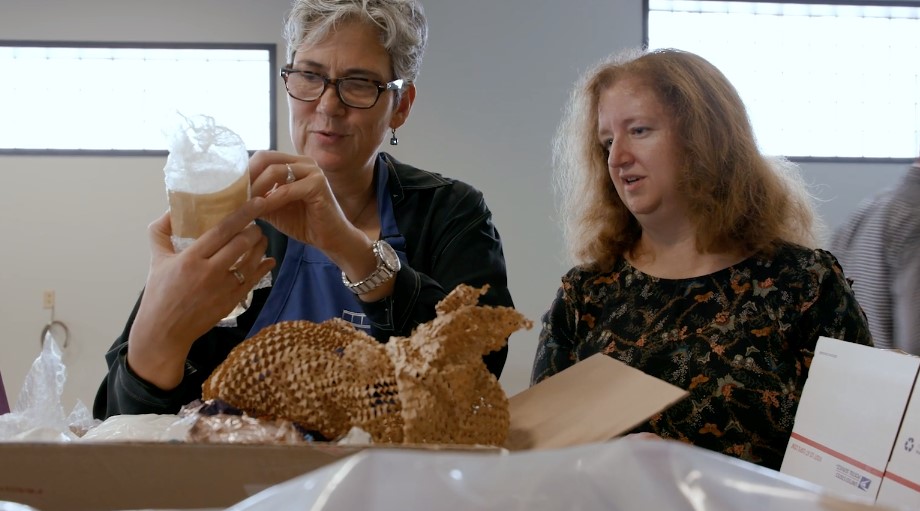 Conservator Jodie Utter and curator Maggie Alder examine the specimens in one of Dion’s shipments. Image: ‘The Perilous Texas Adventures of Mark Dion,’ by Erik Clapp.

In effect, the Amon Carter Museum of American Art became more like a natural history museum. Dion’s is the systematic method we’ve developed over centuries for learning things, classifying specimens, for establishing history, for organizing thought. Whether it’s geology, botany, archaeology or any of the physical sciences: We collect items and then categorize them, slot them by species, chemistry, age, location, color.

But Dion is well aware he’s a 21st-century artist looking at the ways 19th-century travellers thought. So Dion’s exhibition is like a rather eccentric Victorian cabinet of curiosities, almost a parody of a study of a naturalist or gentleman explorer who’s gone a little round the bend into hoarding Phillips screwdrivers and Boy Scout patches. His displays are not organized by species or age or chemical make-up. His artist’s eye finds the ways discards and oddities chime. And there’s Dion’s deadpan humor. Rocks shaped like eggs sit near wooden duck decoys. It seems the important hand tools of Texas include the glue stick, the wine cork pull and the Kodak slide projector.

In researching Texas the way he did, Dion says two things surprised him. First was how hard it turned out to be, in such a proudly singular state, to find artifacts that were distinctly Texan. 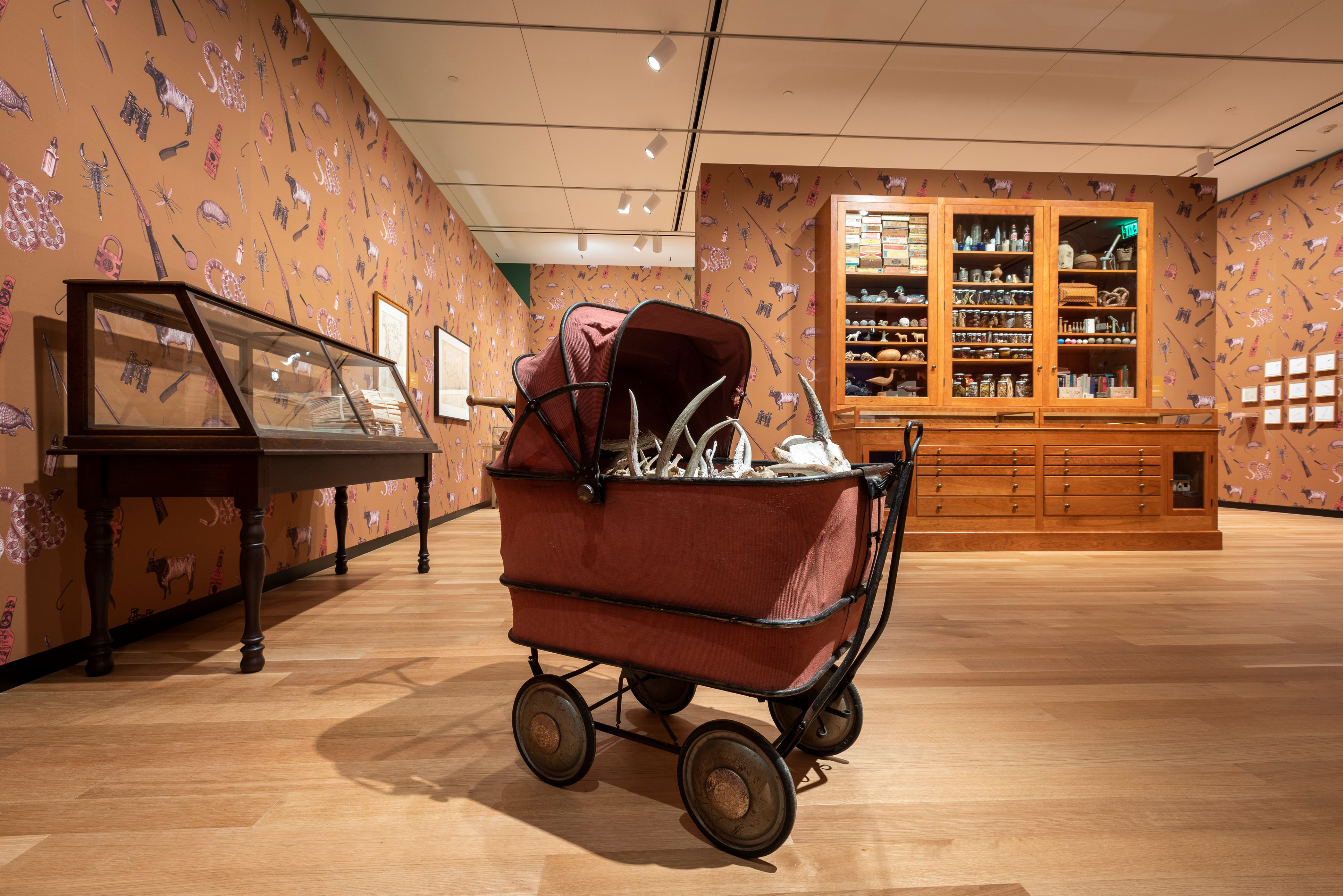 A baby carriage full of sun-bleached bones. Detail from the exhibition, ‘The Perilous Texas Adventures of Mark Dion.’ Image: Courtesy of the Amon Carter

“There’s so much bleed-over in our culture,” he says. “You know, so much is about mass production.” With the exceptions of old maps, student report cards or family photos, so much that ‘defines’ this state has long ago been commercialized and exported.

So what remains, what truly distinguishes places like Texas, Dion says, is often the stuff not in junk shops. It’s our food, our music, our art.

Paradoxically, the other thing that surprised Dion was just how diverse, how contradictory the state is.

It’s true that Galveston is not West Texas. San Antonio’s not the King Ranch. Austin’s not Fort Worth. Different climates, landscapes and plants. Different peoples.

Or put another way, as empty as Texas often seems, it’s still stuffed with stuff.