The cigar box guitar was an invention of poor musicians during the mid-1800s, but recently there’s been a renaissance. Art&Seek’s Hady Mawajdeh talks with historians, musicians and makers of cigar box guitars to learn about the instrument.

In downtown McKinney, Kevin Edwards is cutting into a long and narrow piece of wood inside his music shop. The sound of his handsaw moving back and forth across the wood fills the room with sound as a cardboard cutout of film star John Wayne keeps a watchful eye over the work being done at a work station in front of him. 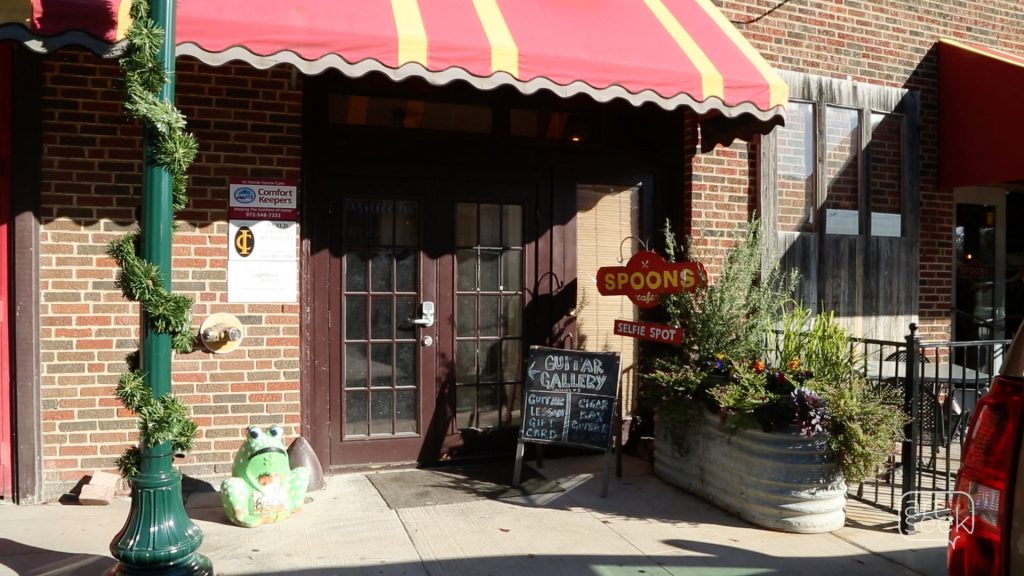 Guitar Gallery on the Square is located in downtown McKinney above a small cafe.
Photo: Dane Walters

The shop is called Guitar Gallery on the Square. It’s small and quaint, the sort of small music shop that only seems to exist in books or movies. There’s an old record player in the corner and guitars hanging on the wall. Edwards uses them to teach lessons. But when he’s not teaching, Edwards crafts cigar box guitars.

“I like to cut freehand,” Edwards says keeping his eyes focused on a piece of wood in front of him. “Perfection is unobtainable, so freehand makes things more fun.”

He got the idea to start building cigar box guitars a few years back. He was on vacation in Florida and spotted a busker performing with one: “Street performers are known for having interesting instruments and when I saw the guitar, I was drawn to it instantly. It was pretty cool, being a guitar player myself, so I started researching them online, then started building my own. And then I just kept at it.”

Edwards has made and sold more than 100 guitars since then. He sells them for $150 a pop — a bargain, considering you can find them for as much as $2000 online. But it’s also ironic because at one time these homemade guitars were a poor man’s instrument. Now you can spot stars like Billy Gibbons, Chris Cornell and Keith Richards playing them.

They aren’t the only ones getting into the action though.

“Paul McCartney won a Grammy for his performance with Dave Grohl’s “Sound City” and in there McCartney has a song called “Give Me Some Slack” and he’s playing a cigar box guitar as well,” says Shane Speal from York Pennsylvania.

Speal is the self-proclaimed “King of Cigar Box Guitars.”

“I dubbed myself that, but honestly I have no idea why anyone would want to be the king of an instrument made from garbage,” says Speal. “The cigar box guitar has not only become my passion, but it’s become my occupation.”

“The gimbri was nothing but an empty wooden box with a skin over the top, but the neck was shoved the whole way through the body of the instrument,” says Speal. “Most cigar box guitars are made that way too.” 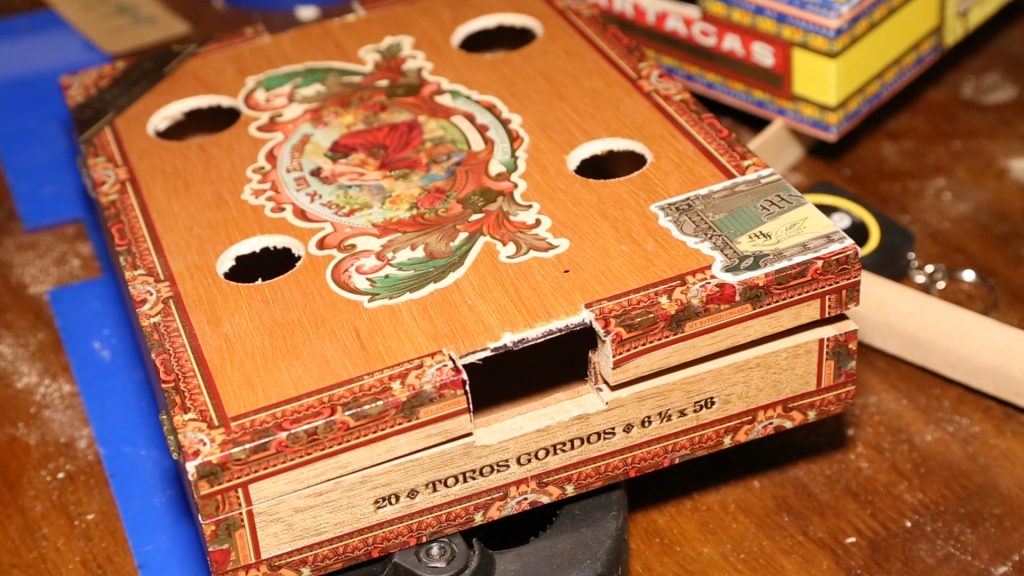 Wooden cigar box on the verge of becoming an instrument. Photo: Dane Walters

If you’re wondering why folks decided to turn cigar boxes into their version of the gimbri, Speal says it has a lot to do with U.S. shipping and tax regulations in the mid-1800s.

“Cigars used to be shipped in big barrels, but the government needed to tax them,” says Speal. “So they said that cigars needed to be packaged in boxes of 20 or 50.”

And since cigars were popular at the time, all of a sudden, these decorative wooden boxes were everywhere. The instruments soon followed and so did instructions for creating them.

“We found plans written by Daniel Carter Beard – the man who started the Boy Scouts. He published plans for how to make a cigar box banjo that were based on a banjo that his family’s slave made,” says Speal.

By the 1920’s, the simple, three- and four-stringed instruments were spotted far away from the Deep South, where they’d originated.

“I’ve also found a pocket of cigar box guitars and other instruments in the upper peninsulas of Wisconson and Michigan,” says Speal.

“Elmore Jame and Muddy Waters used to play a diddley bow, and Lightin Hopkins built a cigar box guitar out of screen wire,” says Williams. “In fact, all of these great musicians used to play cigar box- or diddley bow-related guitars because that’s how you initially get the blues feel.”

And then there’s Blind Willie Johnson.

“He learned to play at the age of five on a one-string cigar box guitar that his dad made him,” says Speal. “Blind Willie Johnson took an old pocket knife, and he would play up and down that one string with that knife as a slide.”

Johnson’s 1927 song “Dark Was the Night, Cold Was the Ground” is on the Golden Record that was launched into space in 1977 on the Voyager space probe. That recording was made with a single-string slide guitar. But Speal says it’s the type of song Johnson grew up learning to play on his cigar box guitar.

What’s so special about the cigar box guitar? 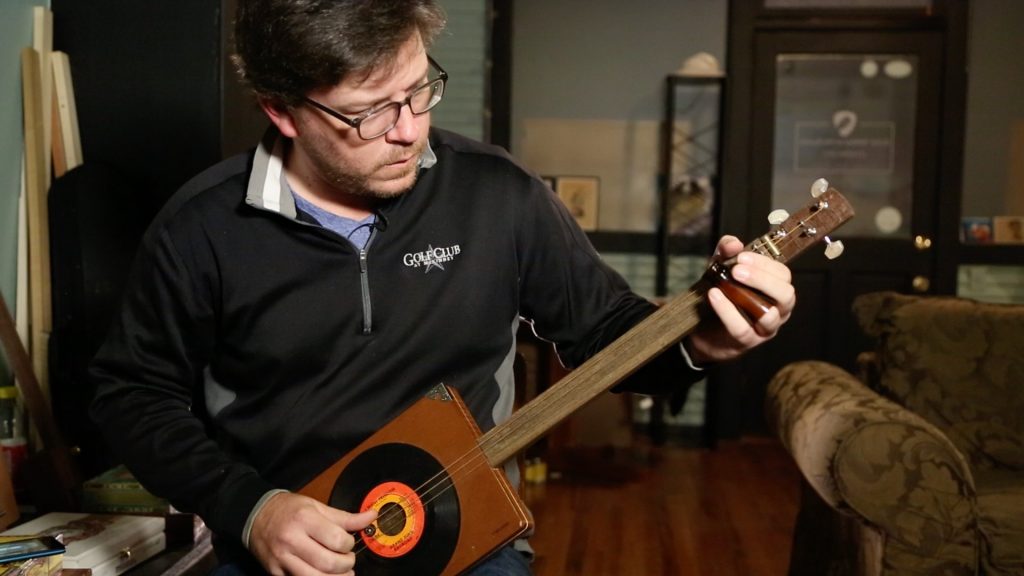 Today, there are countless websites dedicated to the instrument, including Speal’s Cigar Box Nation. But why? What is it that has musicians and hobbyists building and buying these instruments? Speal says it’s the sound.

“You can hear it,” says Speal. “The thing buzzes. It rattles. It’s raspy. And it’s just absolutely perfectly imperfect.”

North Texas craftsman Kevin Edwards agrees, “Every single one sounds a little bit different. So when you string them up at the end after spending so much time building them, it’s very exciting to hear what it sounds like.”

So — who needs to buy a guitar when you can just go out and build one? (Instructions)