Tickets to the Van Cliburn International Piano Competition may come with a hefty price tag, but students at Westcliff Elementary in Fort Worth were treated to a close-up (and free) look at the world-class performances that take place at the contest every four years.

Russian pianist Sergey Belyavskiy played a selection of popular classical pieces for the 4th and 5th graders, many of whom have never experienced classical music live. The performance was made possible through the Cliburn Foundation’s Adopt-A-Competitor Program, which matches local schools with elite pianists for a free performance and talk.

KERA’s Bill Zeeble has been following the Cliburn competition this year, and he caught up with Belyavskiy and the students at Westcliff. 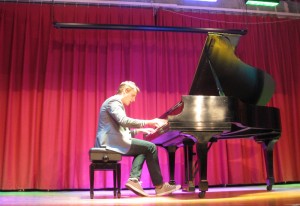 Sergey Belyavskiy, a participant in the 2017 Van Cliburn Competition, plays a piece for students at Westcliff Elementary School.

Cliburn president and CEO Jacques Marquis says the program is meant to expose young listeners to classical music and strip away its “stuffy image.”

“What we have been trying to do is be more accessible,” he told Lee Cullum on KERA TV’s CEO. “And I think it was Van’s vision as well. Van wanted support for exceptional young artists, but he wanted to share with everybody the music, the beauty of music.”

At Westcliff, Belyavskiy’s performance did not fall on deaf ears.

“I loved it,” said Naomi Cepeda. “I know he has passion for the piano. I’m just impressed by that.” 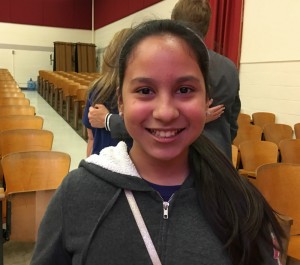 Aside from getting to share his passion, the school performance also gave the 23-year-old pianist a chance to perform contest material ahead of schedule.

The Cliburn competition comes to an end June 10, when the best of 30 competitors will be crowned.

Check out Art&Seek’s coverage of the competition below, and be on the lookout for more updates.

Van Cliburn Piano Competition Kicks Off In Fort Worth