Whether you’re into vintage punk, esoteric jazz, or fresh-off-the-press local releases, when it comes to wax, North Texas record stores have your back year-round. That being said, collecting (hoarding) vinyl is — admittedly — a pretty expensive hobby. While your local thrift store may have a few dusty Barry Manilow LPs under $1, new or original pressings can cost as much as $50. Once a year, however, something magical happens…

Every year, on April’s third Saturday, record stores around the globe open early and stay up late for Record Store Day, slinging new releases, special editions, free food, dope concerts, and stellar deals. DFW is no exception. With dozens stores to hit up across the Metroplex, there’s endless opportunity to start or expand your wax collection on the cheap this Saturday. Lace up your black canvas high-tops and check out these North Texas shops:

Just voted “Best Store On The Square” in the “Denton Record-Chronicle”‘s 2016 “Best Of Denton” competition, Recycled Books is a must-see. Though known for its massive, quirky inventory of used books (including “Books for Tall People”), the giant, purple opera house also boasts one of the best vinyl selections in DFW, including new pressings and local releases. The entire store — books, records, DVDs, and all — is 20% off through the weekend, including its Record Store Day exclusives. As always, Recycled opens at 9 a.m.

When you’re finished at Recycled, be sure to mosey over to Mad World (also on the Square) and hit up their punk collection. While you’re there, check out their inventory of odd t-shirts and try to buy that White Stripes lithograph hanging above the counter for me. — They won’t sell it. 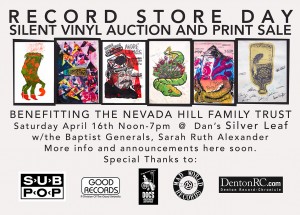 While you’re around, you’ll want to swing by Dan’s Silverleaf to bid in a silent auction or purchase a print in support of the late Nevada Hill’s family trust. Additionally, catch performances from The Baptist Generals and Sarah Ruth Alexander in this special Record Store Day event sponsored by the Denton Record-Chronicle, alongside vinyl/indie royalty like Sub-Pop, Mad World Records, Doc’s Records and Vintage, and Good Records. It all takes place 12-7 p.m. at Dan’s.

Josey Records is a behemoth of a record shop, never in short supply of a good find. For Record Store Day, Josey will house over 300 special releases. Plus, turntables are 10% off in celebration! Throughout the day, you’ll be able to catch performances from a crop of local musicians like Trái Bơ and FOGG. You’ll be able to commemorate your experience with a (limited) complimentary candy-red LP, featuring tracks from those artists performing in-house. Though Josey’s selection is impossibly huge, expect it to be a little huge-er Saturday — that is, if you get there in time. Doors open at 7 a.m., sharp.

Fort Worth: Doc’s Records and Vintage

Fort Worthian record collectors, have no fear. Doc’s is serving up free food alongside their 20% storewide discount on used inventory. The shop opens at 10 a.m. and closes at 7, with performances from The Cush, Jake Paleschic, and FOGG (again) in-store. Maybe, if you’re lucky, you’ll score one of those huge sketchbooks made from rescued album art.