Dallas playwright D. L. Coburn’s Pulitzer Prize-winning play from 1976, ‘The Gin Game’ is our clear-eyed classic of nursing-home animosity. Coburn pared human interaction down to a lonely, elderly pair playing a few rounds of cards. We get disguised aggression, amiable chit-chat fending off fears of death and the unsparing yet comic cruelties of luck and life.

‘Ripcord,’ presented by Circle Theatre in Fort Worth through Sept. 16th.

David Lindsey-Abaire’s ‘Ripcord,’ receiving its area premiere from Circle Theatre, is basically ‘The Gin Game’ – if the card-players had passed on and management promptly rented out their room to ‘The Golden Girls.”

That’s not meant entirely as a put-down – ‘Ripcord’ may be thoroughly predictable but it is a little charmer. It’s about the redemption of a female Ebenezer Scrooge, and director Robin Armstrong makes it smooth and effortless, especially with Lois Sonnier Hart as the tart-tongued Scrooge and Deborah Brown as her cheery nemesis. The two performers lend this ‘old-age Odd Couple’ some necessary warmth. They never fully disguise the sitcom machinery, but they dim the clanking. In particular, there’s a light-hearted daffiness to Brown’s performance that makes her character, no matter how improbable, utterly sweet yet relentless. 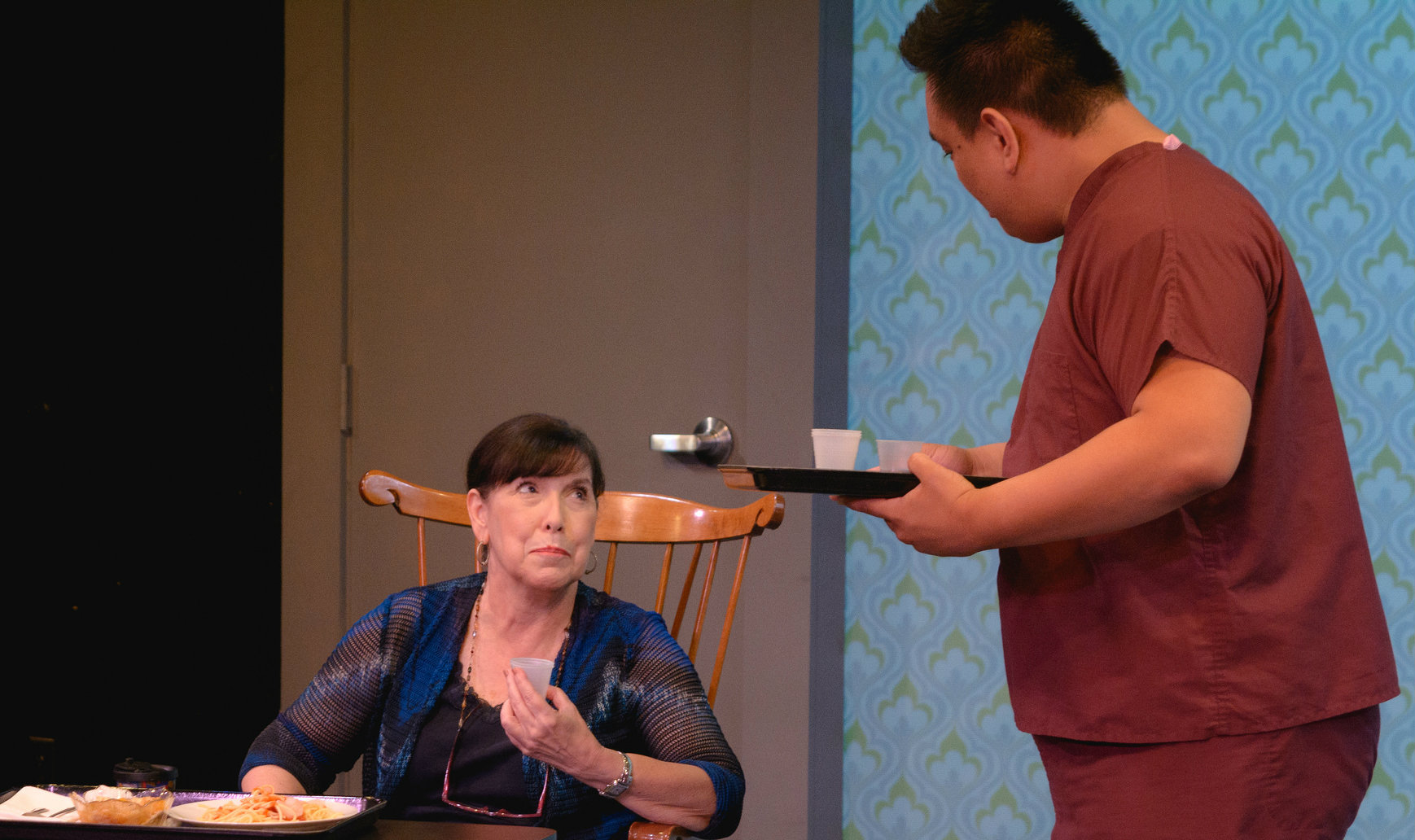 Lois Sonnier Hart as Abby and Mark Quach as Scotty in ‘Ripcord’ at Circle Theatre. All photos: Tim Long

The irritable Abby Binder (Lois Hart) can’t actually afford a private room in this retirement center, but she’s often had one to herself. So she’s come to enjoy it as her quiet and orderly domain: a room with an excellent view. But a new roomie, Marilyn Dunne (Deborah Brown), moves in – over Abby’s objections – and it’s quickly clear that the perky and intrusive chatterbox is going to grate on Abby’s last nerve.

Unfortunately for Abby, the manager who often pulled strings for her is no longer there, so she is stuck with a woman who merrily ignores all of Abby’s rude attempts to get her to shut up and leave. But Marilyn has not lost her marbles; she likes to play games and make wagers to keep her wits sharp. So the two combatants settle on a fairly contrived bet: If Abby can torment the saintly Marilyn into a rage, Marilyn will move out. And if Marilyn can frighten the stone-hearted Abby, Marilyn will stay and she’ll get Abby’s sunny window view as well.

Let the pranks begin: the misanthrope vs. the merry widow. For all its escalating hijinks, ‘Ripcord’ is not as hysterical or madcap as Lindsay-Abaire thinks it is. At best, it’s entertaining, but the attempts at wild funhouse surprises are ghostly versions of the off-kilter humor in previous Lindsay-Abaire plays.

This is disheartening to those who remember those plays. Lindsay-Abaire made an auspicious debut with ‘Fuddy Meers’ in 1998. A demented comedy about a perpetual amnesiac who’s abducted, “Fuddy” made Lindsay-Abaire look to be the next Nicky Silver (‘The Food Chain’) or Christopher Durang (Durang, in fact, had been his teacher at Juilliard). By the time of his Pulitzer Prize-winning ‘Rabbit Hole’ in 2007, Lindsay-Abaire had matured; his satiric absurdism had deepened emotionally with a family bewildered by grief over the death of a teenage son. 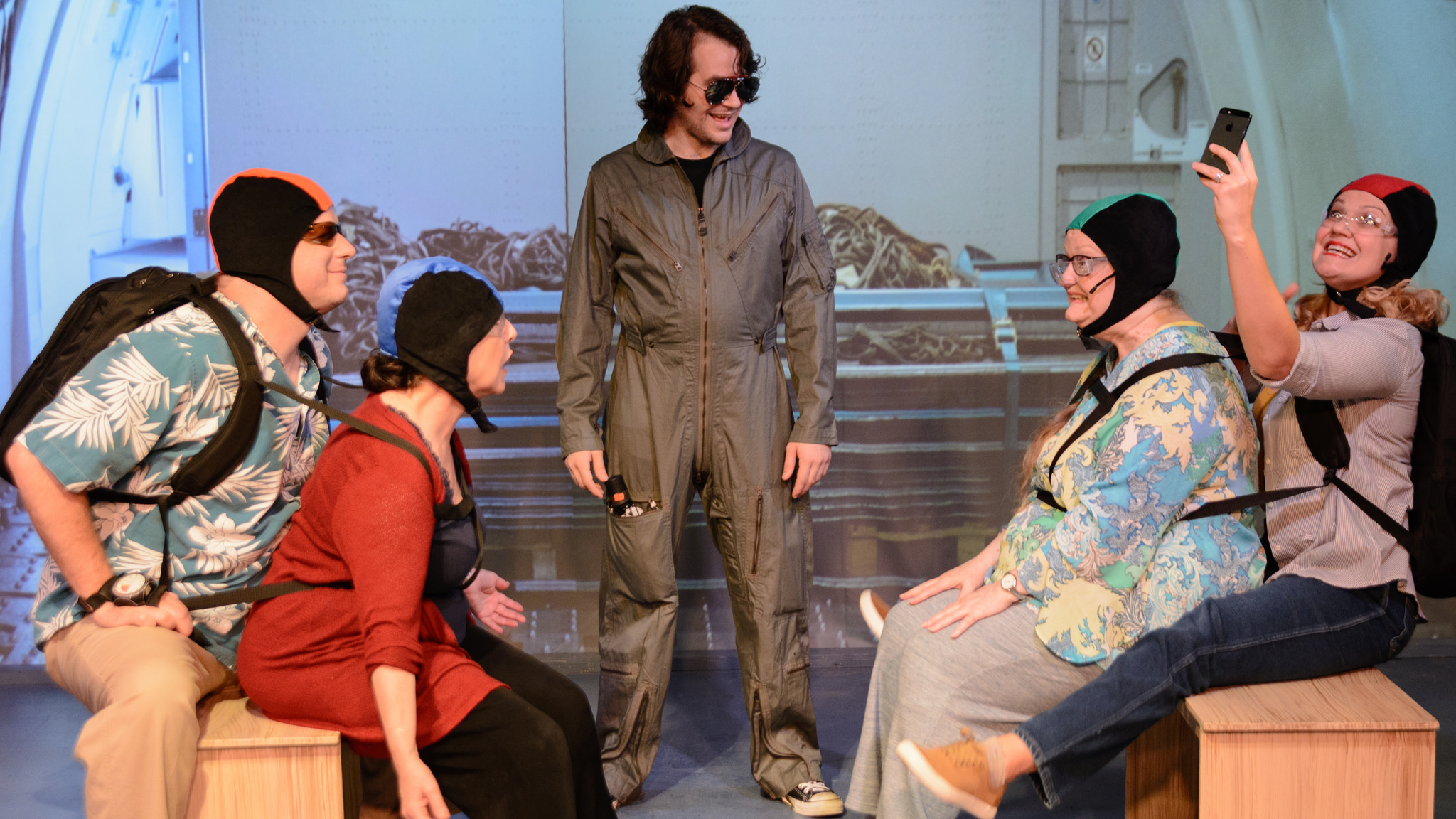 In ‘Ripcord,’ any troubling thoughts about death or loss or the debilitating isolations of aging are kept safely Xanax-ed. Abby has a long-estranged, addict-son, but that’s about as heavy as the going gets – and one recalls that Lindsay-Abaire also provided the book and lyrics for ‘Shrek the Musical.’

Photographs do not do justice to Armstrong’s smart direction or designer Clare Floyd Devries’ production. Because Devries uses video projections, the general look appears wallpaper-flat and empty. But she doesn’t use the projections simply as video Ikea: cheap, replacement interiors. In between, we get photo album snapshots: cute babies, elderly couples acting up in parks. These ironically boost the entire atmosphere of happy family memories and interactions that are definitely not happening here. In the same vein, Armstrong’s ingenious staging of a skydiving stunt almost makes up for the rest of the script’s lack of real cleverness.

There happen to be two kinds of ‘ripcords.’ There’s the one most of us are familiar with: It’s part of a skydiving harness; you pull it to unfurl the parachute. But the other, older kind of ripcord is the descent mechanism of a gas balloon. You pull it to release the gas and cause the balloon to sink. As a comedy about growing old and learn to compromise, ‘Ripcord’ never really sinks. There are no sharp edges to puncture things. It mostly just bobs along, pleasantly.