Presidents and politics seem to have been filling North Texas stages. Recently, Lyndon Johnson was portrayed in the drama, ‘All the Way,’ at the Dallas Theater Center. Now we have an opera about John F. Kennedy premiering in Fort Worth, while in Dallas, there’s ‘Deferred Action.’ It’s a brand-new play about Latino activists in a presidential campaign. KERA’s All Things Considered host Justin Martin talked with Art & Seek’s Jerome Weeks about the two new premieres

JWIt’s not because it’s an election year. One of the shows has very little to do with politics, for instance, and all the shows are very different. In fact, you couldn’t get more different portrayals of Lyndon Johnson than what we saw in ‘All the Way’ and what we now see in Fort Worth Opera’s ‘JFK.’ In ‘All the Way,’ we got Johnson the political arm-twister, the hard-charging wheeler-dealer. 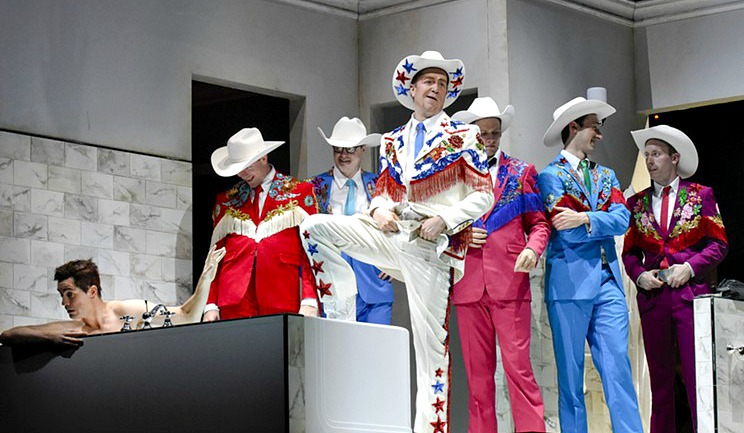 Matthew Worth as JFK (in tub) and Daniel Okulitch as LBJ. Photos: Karen Almond

He was the guy who finagled the Voting Rights Act through Congress.

JWRight.  On the other hand, in the opera ‘JFK,’ Johnson is  — well, Johnson’s a joke. ‘JFK’ follows the Kennedys on their last night together in Fort Worth in 1963 – before they go to Dallas the next day. Kennedy is in pain from his bad back, and Jackie gives him a morphine shot and what follows are his hallucinations and memories. The opera takes a marvelously surreal turn. Kennedy even goes to the moon where he finds the Soviets have taken over — reflecting our very real Cold War fears at the time.

But then Vice President Johnson barges into the hotel suite. I understand LBJ functions here as comic relief, but his portrayal as a macho buffoon, complete with flag-waving and confetti and hookers is disappointing.

JWIt’s not that it’s crude or funny — it is. It just the portrayal feels out-of-date, like some satire from the ’70s. I mean, haven’t we’ve gotten past this kind of yokel caricature of Johnson?

JWBut it’s also disappointing because so much of ‘JFK’ — composed by David Little and written by Royce Vavrek —  is about seeing past the obvious media images of Jack and Jackie to the hurt human beings underneath. Nothing like that is done for LBJ — he represents, more or less, the worst of American politics from the period. I understand that’s the character’s function, and he’s a minor character at that, but it’s garishly unsubtle for an opera that is trying to be so sensitive. It’s really the low-point for ‘JFK.’

Instead, the most affecting moments in the opera come in scenes like the duet between Jackie, sung by Daniela Mack, and her future self, Jackie Onassis, sung by Katharine Goeldner. Jackie asks, does he love me? And she’s basically told, “He will love you  — every day for the rest of his life.” 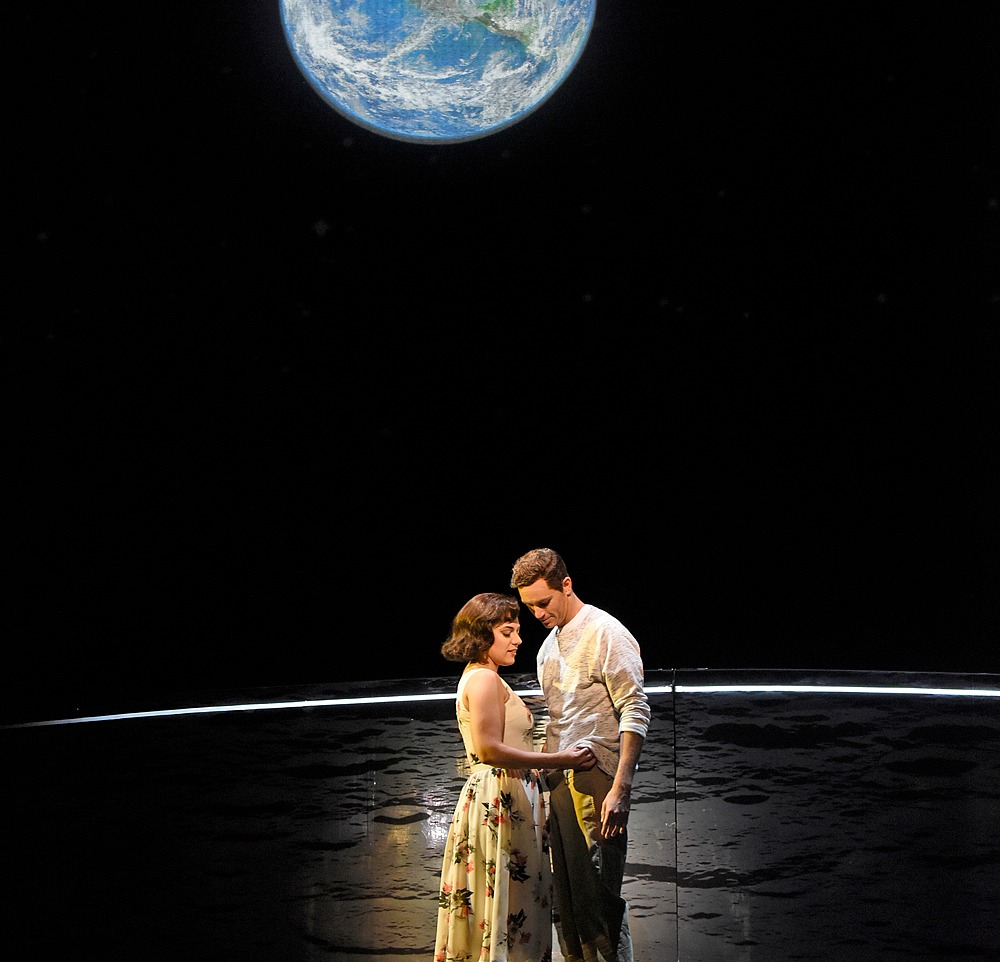 Daniela Mack as Jacqueline Kennedy and Matthew Worth as John F. Kennedy.

JWNo. She doesn’t. It’s an incredibly touching duet, beautifully sung, just as Matthew Worth does a lovely job with his late aria, ‘A Lucky Man’ — JFK’s recognition what Jackie means to him.

And visually, ‘JFK’ — directed and set designed by Thaddeus Strassberger — is a dazzling production. Ironically, three years ago, we began the 50th anniversary commemoration of the assassination of Kennedy with ‘Hotel Texas,’ the Dallas Museum of Art / Amon Carter collaboration that re-created the mini-art exhibition put up in the Kennedy’s hotel suite by Fort Worth arts patrons. It was an eerie and moving bit of time travel — to stand among the last artworks the Kennedys saw together. And here on stage, we see it again, bookending all that’s happened since 2013 when it has come to reconsidering JFK, LBJ, the events in Dealey Plaza and so on. We began with the 24 hours just before the disaster struck, and we end with them, too — as if keeping the portentous moment off-stage for a while allowed us this contemplation, and to see things fresh, not simply re-hash the over-familiar Zapruder images, TV announcements and conspiracy babble.

But then Little and Vavrek shoehorn other considerations into that waiting moment, considerations about history and fate. So in addition to the LBJ cartoon, there’s all this complicated stuff about John Wilkes Booth and the fates – as if the Greek fates were in on the conspiracy with Lee Harvey Oswald. That all seems unnecessary. And besides, Stephen Sondheim handled the Booth/Oswald links much better in ‘Assassins.’

The very human drama here is the Kennedys just trying to find each other again through their haze of pain and the loss of their child and JFK’s philanderings and the pressures of politics. For anyone who saw the utterly harrowing Little/Vavrek opera, ‘Dog Days,‘ — presented by Fort Worth Opera last year in what still stands as the company’s bravest, most disturbing production — the overall effect of ‘JFK’ may feel similar: All the dark, incredible stuff is offset by some painfully lovely music, but I wonder if the difference here is that ‘Dog Days’ was inspired by a Judy Budnitz short story, while this libretto is original with Vavrek.

If the opera JFK is trying for the human, you’ve reported that Deferred Action at the Dallas Theater Center is definitely political.

JWYeah, interestingly enough, ‘Deferred Action’ also recalls ‘All the Way.’ They’re both about the classic political dilemma: Do you settle for what you can get – or do you refuse to compromise and push for what you think is right? In ‘All the Way,’ it was about civil rights. LBJ couldn’t get his full civil rights program pushed through before the 1964 election — so he had to turn around and try to sell that half-a-loaf to Martin Luther King Jr. and the black activists who’d been marching and getting beaten for their efforts. In ‘Deferred Action,’ it’s immigration reform for the DREAMers, the young Latinos brought here illegally by their parents.. Only this story’s told from the viewpoint of those activists. They have to decide whether to support a Latina Democrat, who’s cagey and incremental on immigration reform because she doesn’t want to alienate middle-of-the-road voters — or do they go with this loose-cannon conservative Republican who promises complete citizenship out of a sense of Christian duty? 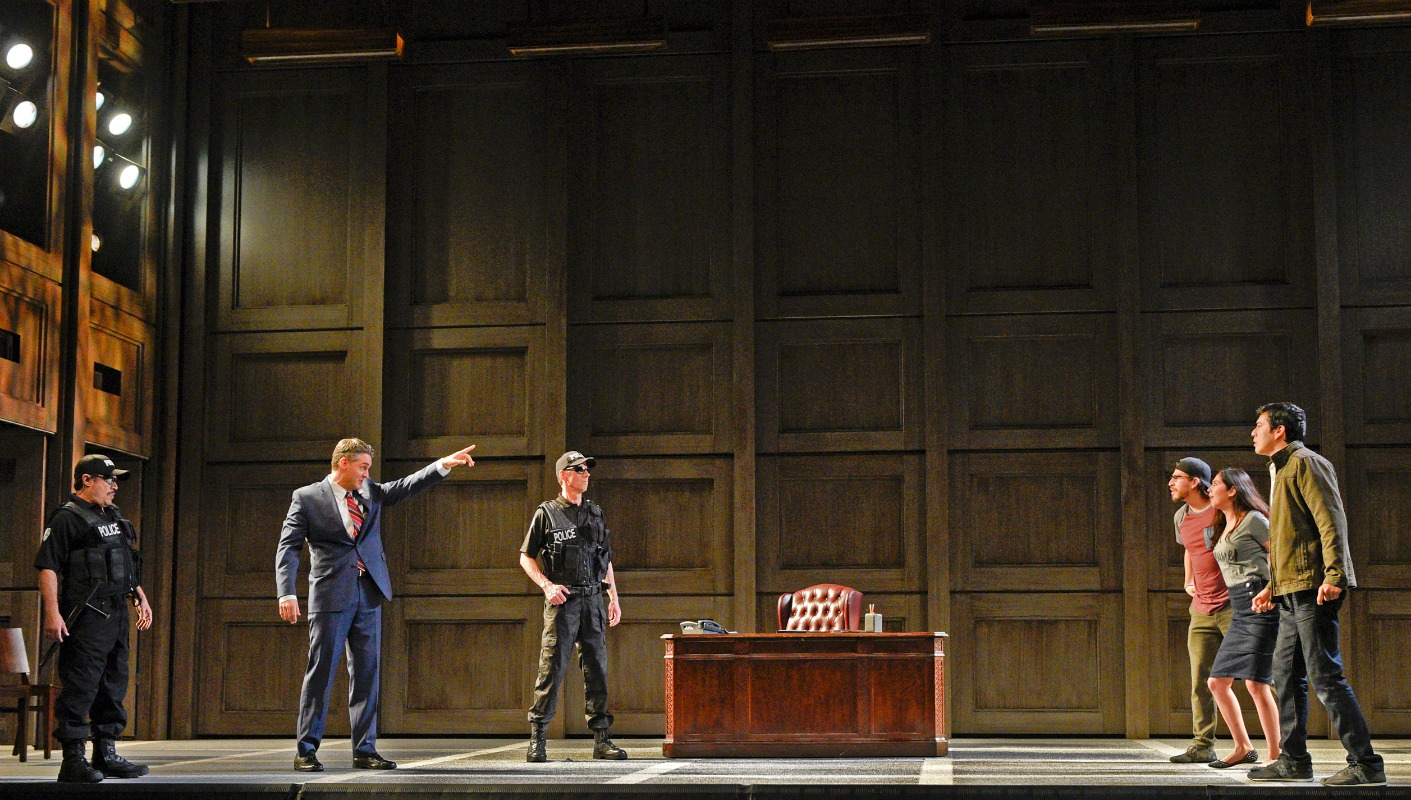 As the main character, Javi, played by Ivan Jasso says, arguing to  “We only want one thing. He can do it if we get enough people behind him.” To which his fellow DREAM activists can say only, “You can’t be serious.” And that argument escalates to really heated levels with marriages, political loyalties and generational differences on the line.

JWMuch of it. It really is a drama about how frustrated Latino immigrants are, trapped in the political deadend we’ve had the past several decades. Unfortunately, Dale Jenkins, that loose-cannon Republican is very much like the cartoon LBJ in the JFK opera. He’s mostly comic relief, and the actor, Michael Brusasco, plays him for all the hick hee-haws he can But then Brusasco has to pull off this conversionary pivot, and Jenkins asks Javi and his fellow DREAMers to believe him, he’s absolutely serious about immigration reform, even if all his other political stands (anti-abortion, pro-oil pipeline, anti-government regulation) are anathema to Javi.

There are two problems here: One, every serious conservative candidate who’s tried to break this logjam and bring Hispanics into the Republican Party — John McCain, Jeb Bush, Marco Rubio — has gotten absolutely hammered by the nativists, by the Tea Partiers, basically, by the white, working-class base that, regardless of whether they’re truly racist or not, fears Latino immigration as a direct threat to their declining, economic well-being. The political leaders who’ve proposed any reform — even while swearing they’re not offering amnesty or anything like a path to citizenship — have gotten hammered so hard, they’ve had to walk back their proposals on immigration and border safety. Rubio’s retreat was so complete, it was positively craven. So for Javi to believe Jenkins might actually deliver immigration reform — even if Jenkins can sell it to social conservatives as the truly Christian thing to do — that’s a big stretch.

Co-authors David Lozano and Lee Trull initially confront this point — through their tough-talking Latina candidate (Christie Vela), who tells Jenkins his bill is dead-on-arrival. But then Lozano and Trull turn around and, somehow, magically, the bill gets out of committee and looks to be a real, live possibility.

Second, Jenkins must be a creditable presidential candidate with a real shot at immigration reform. That’s because Javi’s choice has to be a real choice — and not just a dilemma cooked up by the authors for high drama. If Jenkins is a demagogic rube with a colorful line of folksy sayings, then Javi looks like a fool to gamble on him. And frankly, I don’t think the script or Brusasco convincingly pulls off the transformation. Jenkins does risk the hatred of the nativist wing (we see angry, gun-wavers shouting they’ve been betrayed and they’re going to throw him out of office), but one can argue that only makes his chances at passing reform look even weaker. What does Jenkins do to prove himself worthy of Javi risking his life? 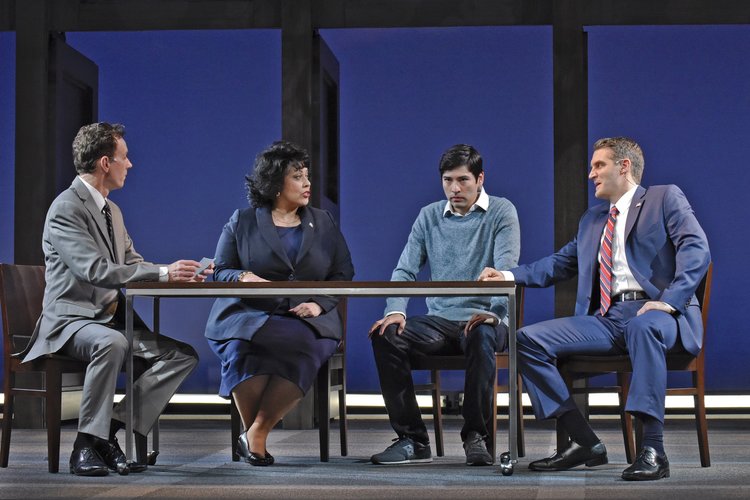 I’ve gone deep into the trenches on the political battles in ‘Deferred Action’ because that’s where this drama really lies. It’s not about any touching human drama. True, Javi’s newfound stance risks his engagement to Lisa (Elizabeth Ramos), but that question gets popped in the first scene and Javi is such a clean-cut figure — Mr. Diaz Goes to Washington and Gets Well And Truly Mad — that one can’t help feeling the marriage was never the stakes being played for here. Even his Granny (Frida Espinosa-Muller) is mostly just some grey hair exuding warmth and history, a way for Lozano and Trull to bring in the horrors of the border crossing (and link this play to its predecessor in the projected trilogy, ‘The Dreamers’).

Javi is only fully human when he’s enraged; otherwise, Ivan Jasso is just a nice-looking bro. No, as the title itself makes clear, ‘Deferred Action’ is about politics, period. It’s about politics the way ‘The Normal Heart’ was: It wants to get theatergoers angry. Was anyone ever truly touched by a single relationship in Larry Kramer’s drama? What we remember is Ned Weeks’ scalding anger over his friends’ needless deaths from AIDS.

So: to Lozano and Trull’s credit, these characters aren’t really human, but neither are they easy bad guys and easy good guys peddling us tripe. What they give us are hard, furious debates.