What can a sculpture exhibition do to illuminate an election year – especially one like this? The Nasher Sculpture Center has opened a new show called ‘Run for President’ and it features large-scale photo murals combined with objects that intersect the worlds of Hollywood and the presidency. Local All Things Considered host Justin Martin sat down with Art & Seek’s Jerome Weeks to decipher what such a show could tell us about American politics. Or American celebrity.

JWYes, I wanted you to listen to this and to tell me what you think it is [serious fanfare, martial in tone with drums, guitar and brass].

It’s gotta be a TV intro. It even reminds me of ‘American Gladiators,’ you know, that old game show where these musclemen clobbered each other with Nerf bats?

JW
‘Run for President’ is at the Nasher Sculpture Center through Jan. 8th

[laughing] That’s not far off. It’s actually CNN’s election campaign theme this year. They compose a new fanfare for each presidential election. I wanted to play it because that mix of drummed-up conflict, TV entertainment and American politics is a perfect intro to the new exhibition at the Nasher Sculpture Center. It’s called ‘Run for President’ and it’s by Kathryn Andrews, who has specialized in a conceptual kind of pop culture art, using ‘ready-mades’ — carefully chosen objects, often movie props, re-contextualized, often simply separated from their cinematic surroundings so we can see them differently, coolly, ironically. Or they’re put in new contexts to expand their implications beyond the original film and its image associations.

So they’ve actually put together a sculpture show in time for the election?

JWWell, in reality, Andrews worked on these pieces the past 5-6 years. But when the Museum of Contemporary Art in Chicago, where this show originated, invited her to create it, she felt some of this recent work was thematically linked around politics. So she put together these twenty pieces: sixteen objects and four photo murals, all of them in one gallery.

Upon entering that gallery, one of the first of things you see is this huge news photo mural of Bozo the Clown in black and white. In 1984, Larry Harmon — the original Bozo – announced he was running for president. 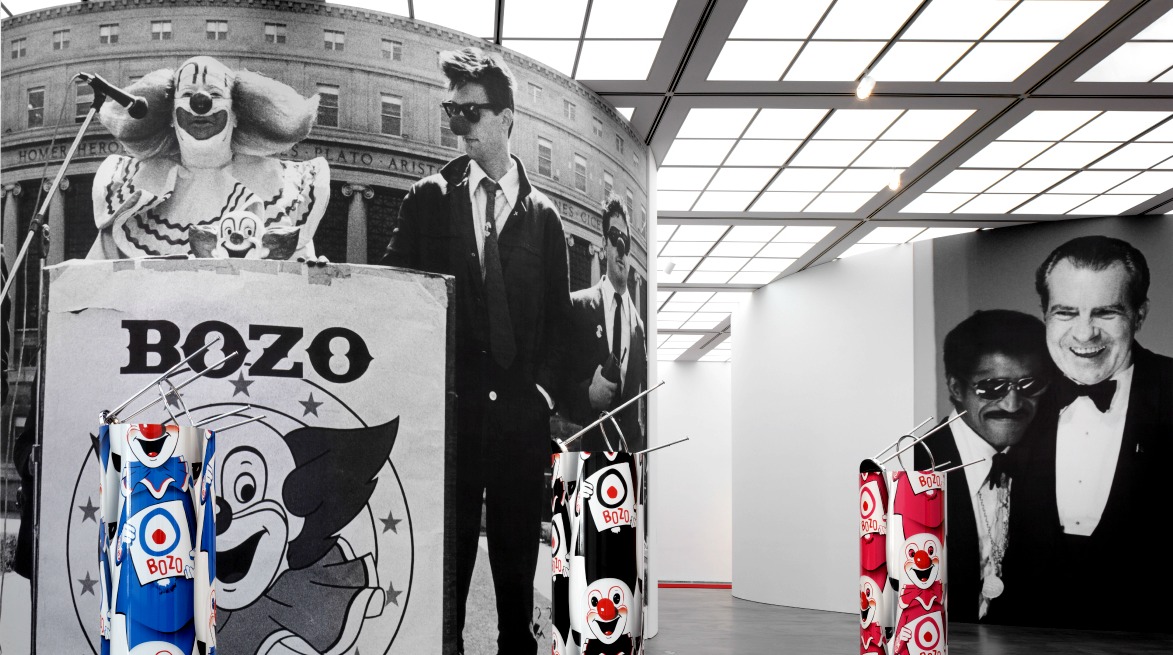 JWYes, it’s true — but only as a write-in candidate. He got 21 votes in Arizona, I believe. And that comic aspect I actually found disappointing. Given our bitter partisan gridlock today, given the current unpopularity of both presidential candidates, seeing all politicians as just a pack of clowns is too easy. So I asked Andrews – isn’t using Larry Harmon’s Bozo a rather easy laugh?

Andrews: But as a character, he’s quite fascinating. He began the Bozo franchise to disseminate certain very positive ideas about children and families. And I think he had some pure motivations in terms of his running for the presidency, believing he could do better than all the other bozos. He said that verbatim. So though on the surface, it appears comedic –

Andrews: Yes, or so I was told — by someone who’s still at the Larry Harmon enterprise.

So two takeaways here. First, Andrews’ show isn’t really a critique of the current campaign, though you can certainly find echoes. Instead, her narrow focus is the sometimes bizarre intersection of Hollywood celebrities with the presidency, the public place where these two image markets meet. No surprise: Andrews lives in Los Angeles.

One of the other murals, for instance, shows that photo-op, press-conference moment in 1983 when Nancy Reagan sat on Mr. T’s lap because they were both promoting their own anti-drug programs. It was a surreal display, albeit a brief and almost comprehensible one compared to, say, a TV gameshow host and occasionally bankrupt casino magnate taking over a major political party. How far we’ve traveled down the road from the days when ‘ex-actor, current president’ seemed preposterous.

The second takeaway is that museumgoers should definitely read the label cards here.

JWBecause – as with the Bozo photo – there’s often a back story we don’t know. The surface image, it turns out, isn’t always everything. There’s often a bit of Hollywood lore or even an actual movie prop involved. Consider the large photo in the show of Sammy Davis, Jr., hugging Richard Nixon in 1973 — a controversial image for Davis because he’d been a serious activist and supporter of civil rights, yet here he was, happily hugging the architect of the ‘Southern strategy,’ the Republican Party plan to woo white Southerners away from their traditional allegiance to the Democrats.

But the irony of that clutch, Andrews makes clear, is that Davis’ first starring role came when he was seven years old and played the title character in the highly racist 1933 movie, ‘Rufus Jones for President,’ in which a young black child is elected president. Some 50 years later, Davis, thanks to his relationship with Nixon, became the first African-American who, as a presidential guest, spent the night in the White House (black servants, of course, had been spending the night there for decades). The whole Davis narrative makes that news image toggle back and forth between bitter absurdity and poignancy.

Easily the most impressive photo mural, though, is a 360-degree diorama of President Reagan’s Oval Office (top image). Standing in the middle of the space is a tall, shiny metal column. And about head-high, there’s a dark hole, like a portal. And if you peer into it long enough to let your eyes adjust you’ll see the actual gun Mel Gibson used in the movie ‘Lethal Weapon,’ which came out during the Reagan presidency. 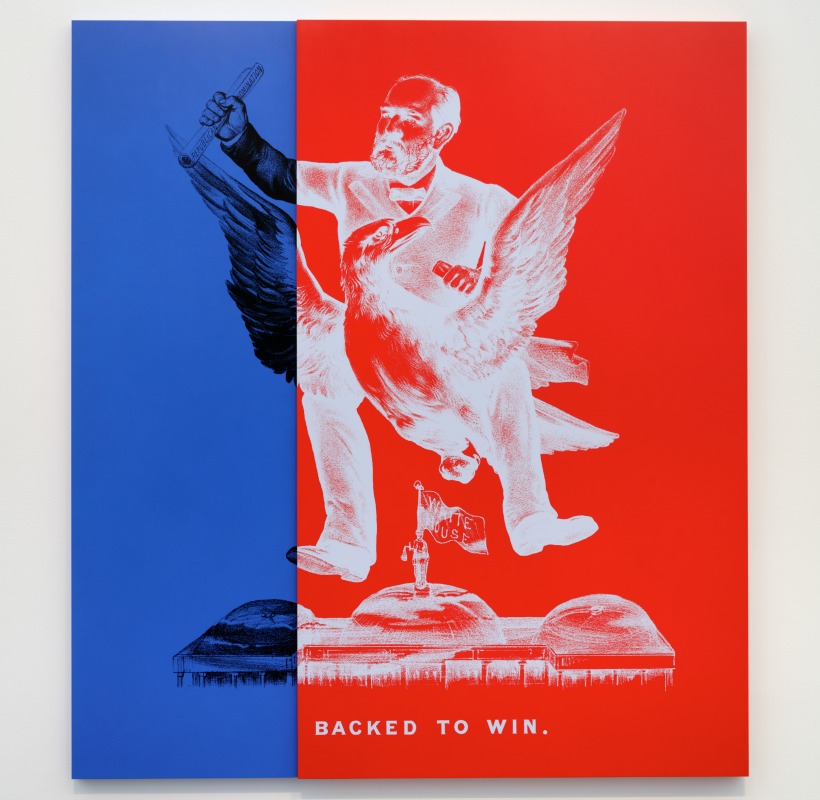 What is she trying to say with that?

Andrews: I was quite interested in that the president holds the ultimate power with the ability to press the button on nuclear weapons. But at the same time, the president exists in a situation of great risk.

And then there’s the fact that Ronald Reagan actually was shot by David Hinkley. And Hinkley was obsessed with Jodie Foster, the Hollywood star.

JWExactly. These kinds of weird connections and associations just kind of pile on. Like, the fact that this show, which originated in Chicago, is now in Dallas, so there’s a whole additional range of meanings — which Andrews is certainly aware of — involving presidential assassinations with the shooting of JFK.

Odd side note: This simulated Oval Office at the Nasher, plus the life-size mock-up at the Bush Presidential Library, means Dallas may be the only city in the world currently with two fake Oval Office attractions. You may boast about it to your friends.

At any rate, there are other Hollywood props included among these objects, some more foregrounded than others. There’s a series of 19th-century campaign images, for instance, enlarged and boldly colored but also given frames that one might overlook. Inside of them are strips from actual movie costumes — like Jack Nicholson’s The Joker from ‘Batman.’ Frankly, I’m not sure what to make of these assemblages, except that the movie costumes come from heroic or even superheroic thrillers (‘The Matrix’) — ergo, they match the puffed-up candidate’s image. Except that some of the posters are negative campaign ads. One sometimes gets the impression that Andrews is a movie collectable fan who, given the opportunity of a sizable exhibition, found red-white-and-blue reasons to turn her collection into conceptual art.

So there’s a lot to chew on here.  What do you make of all this?

JWWell, one thing ‘Run for President’ says is that celebrity status can surmount minority status. Celebrity status can grant African-American celebrities access to the West Wing the rest of us, white or black, never have. And the show says, thanks to marketing and media, we Americans love to confuse (or simply fuse) the spectacle of Hollywood with the spectacle of power. They both grant people this ‘aura.’ These days, the press keeps calling a politician like President Obama or Donald Trump a ‘rockstar.’ And how does a (carefully managed) convention play out now on TV and social media except as a glorified reality game show? Political commentators are reduced to tweeting how well the balloon drop was handled and what that might signify about party competency or a future administration’s domestic programs.

The show definitely has a visual impact in its big installations — Bozo, the Oval Office — but these make the others seem like after-thoughts. And perhaps deliberately so. They’re small and deflationary. One item features actual deflated balloons — the convention’s over, go home — another is a pile of ‘gift box’ props that have been rented and featured in many films. It’s still cheaper to rent these than to have new ones constructed.

I’m not sure ‘Run for President’ coheres around anything much beyond such knowledge — that up close, the gift boxes are a little shabby, a little battered. And, of course, they’re all empty. Neither of the two basic notions that undergird ‘Run for President’ — celebrity status is power, and politicians are highly mediated and constructed images which we enjoy more than their reality or their policies — neither of these is particularly revelatory. They’ve been the stuff of media and political punditry since at least Joe McGinnis’ landmark 1968 book, ‘The Selling of the President‘ — although embodied here, they certainly look iconic and impressive and ironic.

One can practically hear a voiceover for the exhibition, sounding like a ’40s tough-guy narrator like Walter Winchell or perhaps a variation on the closer from ‘Chinatown’: Hollywood or D.C. — it’s all just Tinseltown, I tell ya.