‘Ironbound,’ currently getting its area premiere from Kitchen Dog Theatre, is not sleek or clever, splashy or cool. In that sense, it’s not really a Dallas kind of play, Dallas loves winners and only winners. ‘Ironbound’ is much like its main character: a bordering-on-middle-aged Polish immigrant in New Jersey, a battered survivor with a flat, no-nonsense sense of humor. I came here after Iron Curtain fell, she declares. Got here just as American Dream fell in.

Darja loses a young husband, loses a warehouse full of jobs and gets stuck sharing an apartment with a well-meaning, confused, loser-schmoe, a wannabe-stud postman. ‘Ironbound’ is one tough, bleak and funny drama. It’s also simpler-looking than it seems.

Thankfully, Martyna Majok’s play (it’s pronounced my-OAK) has gotten spot-on direction from Tina Parker and some superb performances, especially from Karen Parrish as Darja, but also Seth Magill as her young, musician-husband and Max Hartman as Tommy, the loser-schmoe postman. Hartman brings all the exasperated, waddling schmoe-ness he can to the part — it’s his best  work since the Undermain’s ‘Penelope.’ When Tommy brings a cheap, teddy-bear bouquet of flowers to Darja, just his shoving it at her — part apology, part proposal, part abject surrender — it’s tearfully comic and laughably pathetic. 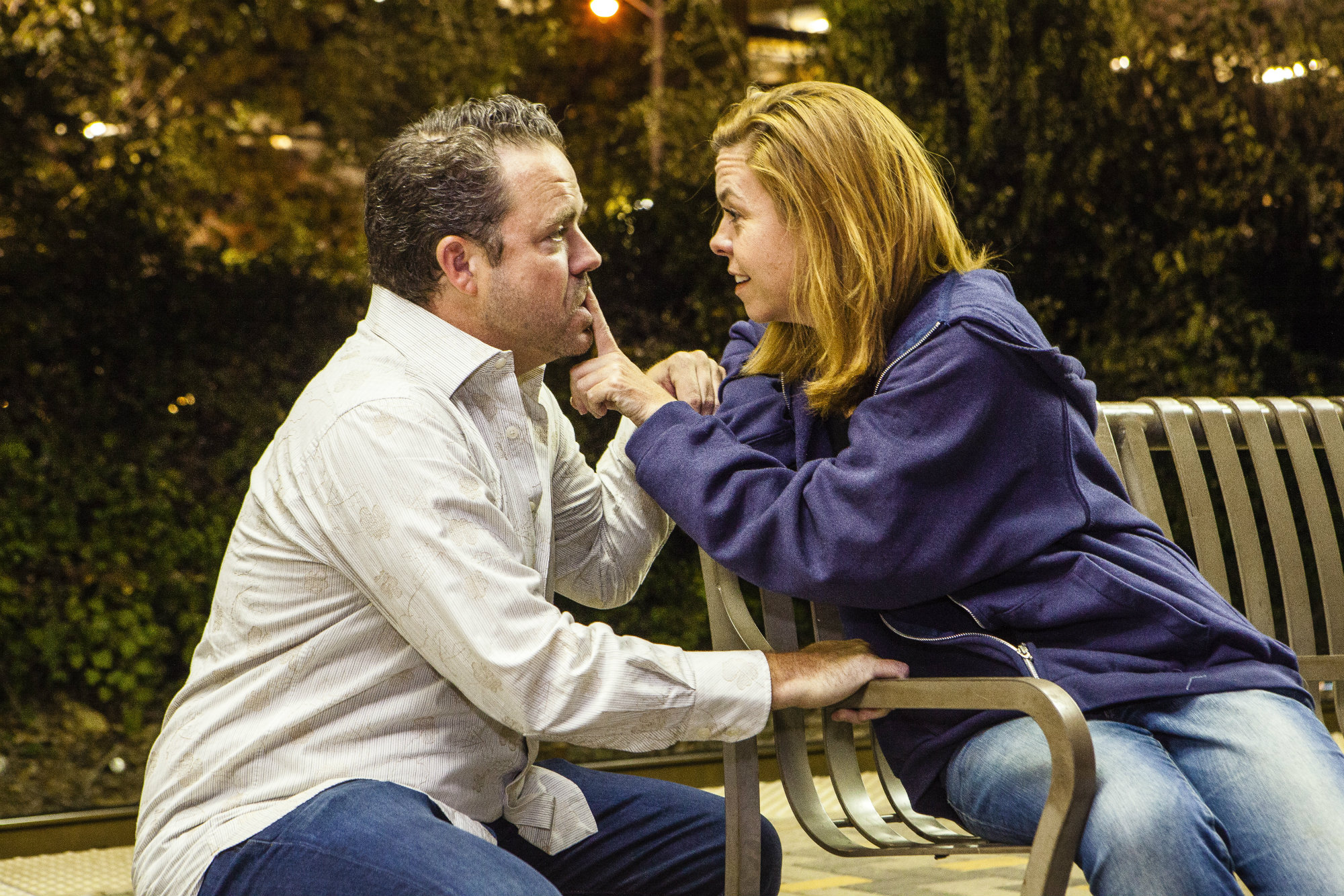 ‘Ironbound’ needs all the laughs it can get. Majok’s vision of barely-working, post-housing-collapse, immigrant America is like one of Bruce Springsteen’s darkest blue-collar ballads – if Springsteen ever sang with a bone-dry Polish accent. At one point during this play, it gets so bad for Darja at that isolated bus stop under a freeway overpass, she considers sleeping on the car tire that’s been dumped there. That bleak little bench and fence are where the entire, 90-minute-long, intermissionless play takes place, a bus stop outside the now-shuttered factory where Darja and her young husband Maks used to work.

So four actors, one pretty barren set, no intermission – what’s complicated here? It’s Majok’s tricky time scheme. The play begins and ends with scenes set in 2014, when the now-twice-divorced Darja has had it — she’s fed up with Tommy, fed up with her life, desperate to see her runaway son, who’s a drug addict and thief. At this point, Darja has become a bundle of anger, cunning and need. When Tommy tries to get her to come back, get in his car and out of the cold, he apologizes or, actually, just shrugs off the infidelity that’s triggered her flight from their apartment. Cheating on her was a mistake, he insists. But she’s checked his cellphone: “Fourteen times it’s not mistake,” she says. “Fourteen times it’s career.”

There’s an icepick precision to her disillusionment you have to admire. By this time, everything for Darja has become transactional. She doesn’t believe in promises, romantic gestures or some high-ideal future. When Tommy proposes they try living together, she promptly wants to know what’s in it for him. Does she have to lie there? If she lies there with him, does she have to make noises?

Karen Parrish delivers a committed, courageous performance as Darja – she basically never leaves the stage for 90 minutes. My one quibble is that, in the scenes that come, flashing back more than 20 years, we don’t see enough of the magnetic, flirtatious Darja, the woman who must have charmed these men. Sure, she was always pragmatic, maybe she was always her own worst enemy in relationships. But Darja couldn’t have been always this cynical and combative — given the male characters’ response to her. 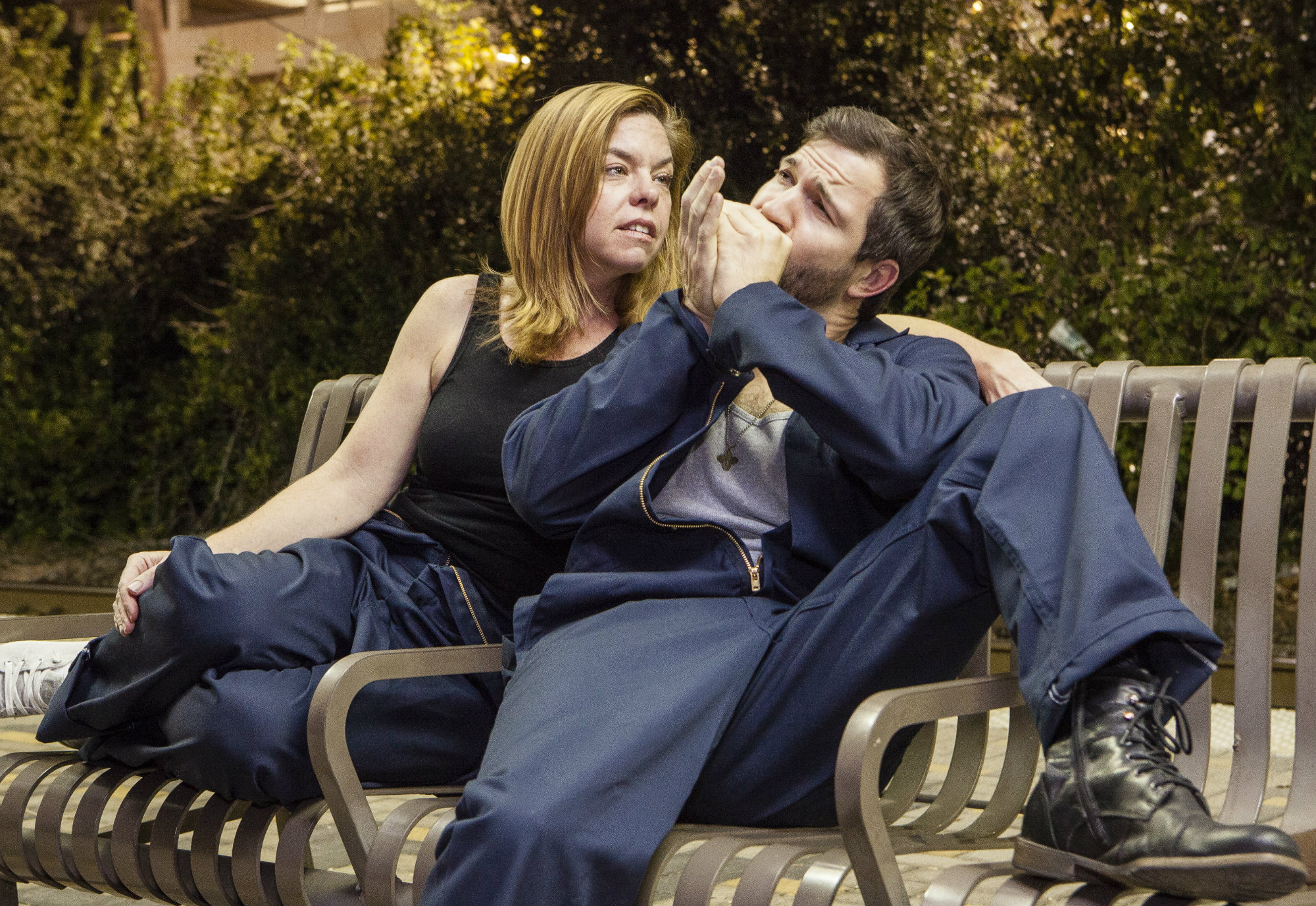 Karen Parrish and Seth Magill in ‘Ironbound’ from Kitchen Dog.

In those flashbacks, we learn that she and Maks emigrated just when all of America’s low-tech jobs that still paid a living wage vanished. Maks doesn’t care so much, he’s always wanted to be a blues musician, and he tries to convince Darja to come with him to Chicago. I grew up with a grandmother who spoke Polish (and only Polish) to the end of her life, so I can say this: As Maks, Magill (like Parrish) not only handles the Polish accent with conviction but his bearing has that combination of resilience and hope and Old World-wariness one often sees in immigrants who didn’t find our streets exactly paved with gold. Kudos to dialect coach Anne Schilling.

All of which leaves us with the young Vic (Doak Rapp) as something of the odd man out. Vic exists for a single scene – a welcome one considering its humor — he’s a hip-hop white boy who stumbles across Darja at the late-night bus stop because he’s out here, getting picked up by men who’ll pay. He comes across all gangsta until we quickly discover he’s actually a rich kid who just hates his family and hates to stay home. Vic’s character is the only one who feels a little borrowed. Rapp brings a goofy, likable openness to him, but one gets the sense Majok needed someone well-off and easy for the contrast — and came up with the rent boy angle as the only likely explanation such a teenager would be at such a bus stop at night.

Speaking of that bus stop: I criticized designer Clare Floyd Devries’ set for Echo Theater’s memorable ‘Ruined’ as one of that show’s few weaknesses. Her Congolese bar in the war-torn jungle was ramshackle yet still looked new and shiny. I can’t help but think that with ‘Ironbound,’ she responded to that comment by creating one of the more credible wastelands on any Dallas-area stage. For years, Dallas-area theaters rarely have captured squalor or decay or just ordinary disrepair in any credible fashion. Here, there are enough ground-out cigarette butts and half-scraped-away posters to suggest Devries made a meticulous photographic study of New Jersey, Bus Stops, Abandoned. Well done. She matches the play, grit for grit.