We’ve not heard about it much on this side of the ocean, so it’s been easy to overlook, but it seems the British have this tiny difficulty providing a large number of their citizens with affordable housing. It’s the same little hitch we North Texans have.

There doesn’t seem to be any.

Oh, that. After the Great Recession (caused, you’ll remember, by the collapse of ingenious new ways of gambling on and disguising dicey mortgages that bankrolled entire subdivisions) and after decades of developers catering to wealthy, sky-dwelling condo owners or pursuing cheaper land father and farther away from jobs or cities instead of building, you know, affordable but low-profit homes, well – what’s a first-time, house-hunting couple to do? Let alone a lower-class one?

And that’s the premise of Philip Ridley’s wickedly pointed if attenuated ‘Radiant Vermin’: Just how desperate will Jill and Ollie – or any of us – get when real estate values are stratospheric, the new housing stock is paltry and there’s a baby on the way? Ridley is a theatrically inventive and mordant British playwright, a favorite of the Kitchen Doggers (their staging of his debut ‘Pitchfork Disney’ was a highlight of pitch-dark imagination). And ‘Vermin’ is KD’s season opener, a Texas premiere in a production by director Tim Johnson that – to fall into realtor-speak – offers the latest in name-brand amenities and signature value. 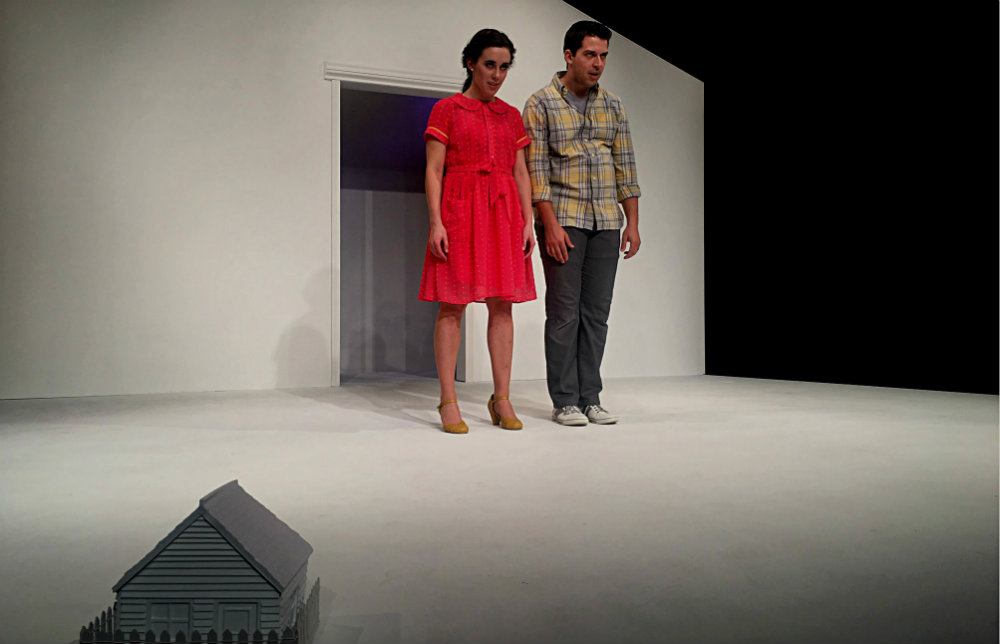 Jill (Kristen Lazerchick) and Ollie (Jake Buchanan) talk directly to us, explaining their cramped living space. But practically before anyone can say “home improvement,”another of Ridley’s mysterious, nightmarish figures appears, this time from the government. Miss Dee (Kateri Cale) likes Jill and Ollie’s gumption, and she urges them to enlist in a new program to help the housing market. Plucky couples will be given their dream home completely free, although admittedly it’s located in a less-than-optimum area. The plan is, as they upgrade their own crib, this will encourage prospective buyers to take a chance, and soon everyone will be coasting along on an upwardly-mobile existence.

But Jill and Ollie soon discover that, not only was their home seemingly built entirely out of code violations, it’s invaded at night by squatters. Or maybe vandals or addicts. They’re not sure because Ollie fearfully, self-defensively kills one in the dark. A blinding light appears, and that’s when the paranormal enters the picture. I won’t reveal precisely what; let’s just say the couple quickly finds it addictive.

There are two problems here. Actually, just one with the play itself, the other with its reception. The weakness of ‘Radiant Vermin’ is that it has a classic, satiric premise about middle-class materialism: What lengths will we go to for that showcase kitchen with the French country pantry? And ‘Vermin’ has the clean, dramatic shape of a creepy little fairy tale, complete with a magical godmother, albeit one who doesn’t have the young couple’s best interests at heart.

But once the play’s premise is laid out, you can figure out how things will go (violently downhill). True, Mr. Ridley still has some theatrical tricks in his home-repair tool box – notably a garden party that has Lazerchick and Buchanan giving a stop-the-show, bravura demonstration of quick-fire caricatures. Yet the party goes on a little too long, as does the play itself. It remains a creepy-funny one-act or an entertaining comic sketch: It’s got laughs and surprises, but at 100 minutes (without intermission), it’s about 15 minutes too long. 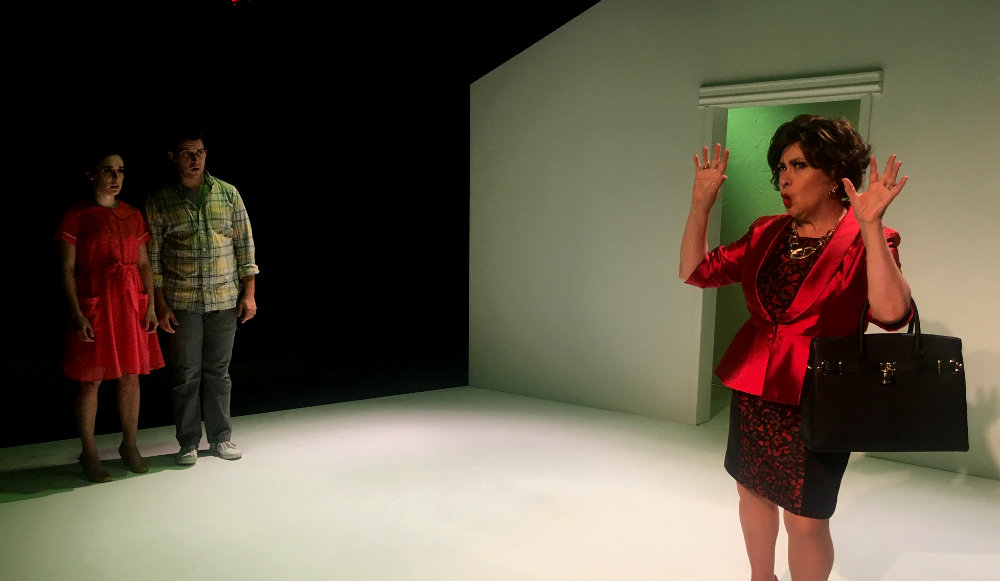 The other problem is a puzzle. ‘Radiant Vermin’ has been received happily in Bristol, Oxford, London, New York, Portland and now Dallas – but entirely as I just described it, a scathing take-down of acquisitiveness and moral blindness, of the young couple and their increasing willingness (or actually, our own willingness) to live comfortably at other people’s expense.

But in all the reviews I can find online, what’s never appeared are the words ‘gentrification’ or ‘homeless removal’ (or ‘encampment abatement,’ the preferred term of art). Seen in that light, ‘Radiant Vermin’ becomes less a skewering of Jill and Ollie for their bourgeois materialism (so all of us reviewers can tsk-tsk about it) and more about our unresolved clashes over property, poverty programs, urban history, social class and race (although the only homeless person we see is presented as white).

That’s why the play’s other theatrical highlight comes when Jill examines her doubts about what the couple’s been doing. Jill has a Christian background, and helping the poor and needy has – we seem to remember – occasionally fit in there somewhere. But by the end, her moral analysis turns to rage about how she and Ollie are the truly needy ones here, the vagrants they’re supplanting are parasites living off hard-working tax-payers like themselves. Eradicating the sad, unwashed losers is not only deserved, it’s precisely the social program that’s called for, the one Miss Dee is implementing under the guise of urban renewal.

In short, ‘Radiant Vermin’ is not just a lampoon of our hollow pursuit of luxury. It’s how we self-servingly justify policies and market forces that bulldoze historic neighborhoods and cash in on ruining working-class communities, while simultaneously providing little recourse for the homeless left behind.

The last time I saw Clare Floyd DeVries provide a set for Kitchen Dog, it was for ‘Ironbound.‘ It was precisely the underclass locale that Miss Dee in ‘Radiant Vermin’ hope to uproot: a late-night, dead-end bus stop with very convincing cigarette butts and desperate people. For ‘Vermin,’ DeVries lines the stage with an amusing touch: a row of dollhouse-sized ‘model homes’ (with lighting by Adam Chamberlin). Other than that, she gives us the beautifully crisp, white, minimalist, house-shaped screen on which Ollie and Jill can project their dreams.

And to paraphrase W. B. Yeats, in such dreams begin responsibilities.