In 2008, the Tony-winning ‘Passing Strange’ offered us the Broadway musical as post-modern rock concert. Conceived and composed by Stew (with Heidi Rodewald) and directed by Annie Dorsen, it was a powerhouse little concert with a narrator singing and playing electric guitar on a stripped-down white box of a set; it looked like a contemporary art gallery. The box even had neon stripes on the walls that would light up and dance in different abstract patterns, while the stage floor had convenient ‘traps’ (holes) out of which band members or actors would rise like pistons, pumping in a new scene, another number.

It was all very spare and cool, but most impressively, ‘Passing Strange’  — with almost uncaring ease — stepped across all those musical-theater barriers of narrative and character that have kept rock ‘n’ roll stuck in other boxes: the nostalgic jukebox (‘Jersey Boys’), the roaring but clunky-artsy realm of the rock opera (‘The Who’s Tommy,’ Pink Floyd’s ‘The Wall’) or the soupy grandeur of the pop music melodrama (‘Les Miz,’ Elton John’s ‘Aida,’ Andrew Lloyd Webber’s whatever). Basically, the musical-theater barriers are these: How do you make rock ‘n’ roll tell a full-length story when each song plays like a knock-out punch? What kind of story can you relate tell that won’t seem pretentious or silly or formulaic (or wear you out) when it’s set against rock’s ferocity?

Leaping past these same stage barriers of narrative and character has been one of the reasons for the breakthrough popularity of such shows as  ‘Hamilton’ and ‘Hedwig and the Angry Inch” — breakthroughs for hip-hop and glam-rock, respectively.

Too bad ‘Passing Strange’ never gained such widespread attention. An off-Broadway hit, it ran only five months on Broadway and never toured. The ‘LA Times’ complained, five years later, the city still hadn’t seen the show. It’s taken nine years to premiere it in North Texas. Yet ‘Passing Strange’ was what a rock concert-turned-musical can do when it fuses a knowing irony, a deceptively simple stage style, a special talent for conveying character and narrative — and, oh yes, conveying all this through some passionate musical numbers. As a result of all this, the Spike Lee-directed film record of the Broadway production may be the most visually, dramatically and musically satisfying rock concert film since the Talking Heads’ ‘Stop Making Sense’ (the stage show conceived by David Byrne, filmed by Jonathan Demme in 1984).

Simultaneously ironic and heartfelt, Stew’s story of a young black man’s flight from his middle-class church in LA to the hemp-smoking radicals of Europe allowed ‘Passing Strange’ to ring the changes on gospel, rhythm-and-blues, punk, funk and avant-garde performance. A rich musical stew. The story is based on Stew’s own struggles, but the journey is familiar enough from the show’s patron saint, James Baldwin. A young black man tries to figure out race, sex, art, politics, music and himself by escaping America, becoming an expatriate. 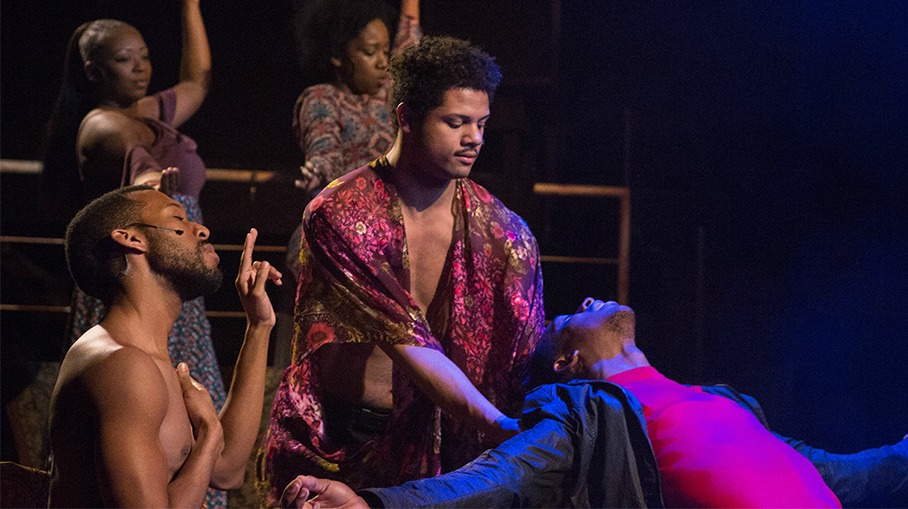 Cherish Robinson and Ayanna Edwards in the back, Cam Kirkpatrick, Quintin Jones and Darren McElroy in the frnot. All photos: Jeffrey Schmidt.

But with Theatre Three’s area premiere of ‘Passing Strange,’ all that white, bright, performance-art spareness is gone (the two video screens add little in the way of visual novelty or depth — they’re like street signs). What’s also gone is the immense, direct power of amplified rock on a concert stage. David Wash’s  set — with its Persian-rugged walkways and mixed-typeface sign “the ReAl” along a back wall — transports us to a classic, old, late-night folk club, a club like the hungry i or The Bitter End. One half-expects a young comic to warm up the crowd with jokes about Nixon. (Very effective lighting, though, from Aaron Johansen.)

Yet in artfully condensing ‘Passing Strange’ into Theatre Three’s space, director vicki washington has kept it singing and kicking and beguiling. It’s now less an innovative rock concert and more an intimate, marvelously potent cabaret revue-turned-musical. This makes clear Stew’s solution to the Great Rock ‘n Roll Musical-Theater Problem. A Narrator adds character depth and keeps the story moving. Think of Sondheim’s revues-turned-musicals, ‘Company’ and ‘Assassins’: There’s an emotional through-line here, but the material isn’t held together so much by plot developments as it is by emotional and musical ones, provided by the older and wiser Narrator singing for and ruefully looking back on his callow, earlier counterpart, the Youth. With the considerable assistance of Calvin Scott Roberts’ terrific performance — he is absolutely comfortable and commanding as the Narrator — ‘Passing Strange’ is, flat out, a pleasure to experience, one of the most enjoyable and affecting musical efforts Theatre Three has offered lately.

Like ‘The Who’s Tommy,’ like ‘Bloody Bloody Andrew Jackson,’ like even ‘Jesus Christ Superstar,’ ‘Passing Strange’ is another rock ‘n’ roll kunstlerroman. It’s the story of a wannabe star trying to match his hapless life with his pressing ambitions, trying to recreate himself as a new, larger, better persona. But where ‘Tommy’ and ‘Superstar’ mixed this with messianic messages and ‘Jackson’ wrestled with the American presidency, the central struggle in ‘Passing Strange’ is over blackness: What it means to be black, what personal and political demands that makes on an artist and how he might get beyond all that to be his own fully realized self. 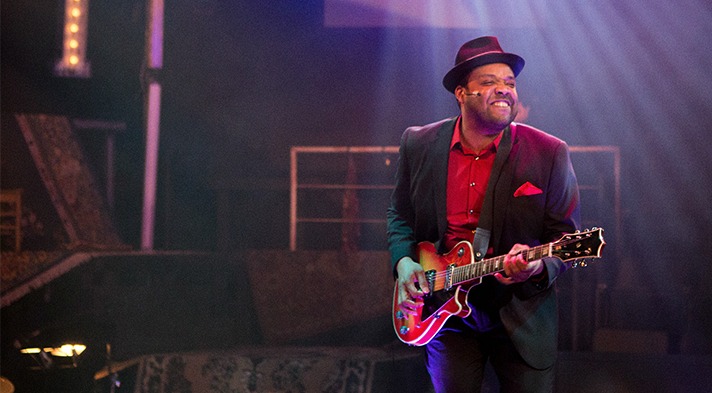 Calvin Scott Roberts as the Narrator in ‘Passing Strange.’

No surpise, then, why this show hasn’t catapulted into public awareness the way ‘Hedwig’ and ‘Hamilton’ have: It’s about race. Yet while Baldwin may be the show’s patron saint, ‘Passing Strange’ doesn’t traffic in his brilliant rage over racial hatred, ghetto poverty or his own family abuse. Looking back, Stew has a warmer, even ironically affectionate take on his own flounderings. Our naive hero, the Youth, is actually raised in a decently middle-class house by a loving (if spiritually insistent) mother (Nikka Morton). It’s one of Stew’s comic strokes to have the Narrator point out, almost immediately, how the mother falls into stereotypical ‘Negro dialect’ whenever she talks of church or God. Here, from the start, being black is handled as part performance, part defining context.

And when it comes to black contexts, the Youth soon encounters that classic dilemma: Being black in America is a role that doesn’t suit him, and he becomes aware of how many people are conveniently just ‘passing’ — passing as black, passing as true churchgoers. The show’s title comes from Othello’s description of Desdemona’s response to his own journeys, his epic transformation into the Moor of Venice, admired military hero, a black Muslim in a white Christian world: “My story being done / She gave me for my pains a world of sighs. / She swore, in faith, ’twas strange, ’twas passing strange, / Twas pitiful, ’twas wondrous pitiful. / She wished she had not heard it, yet she wished / That heaven had made her such a man.” Stew takes ‘passing’ and runs and puns with its meanings, until even characters just passing a joint seem to be wryly commenting on their shared quest for authentic (or hash-disguised) selves. 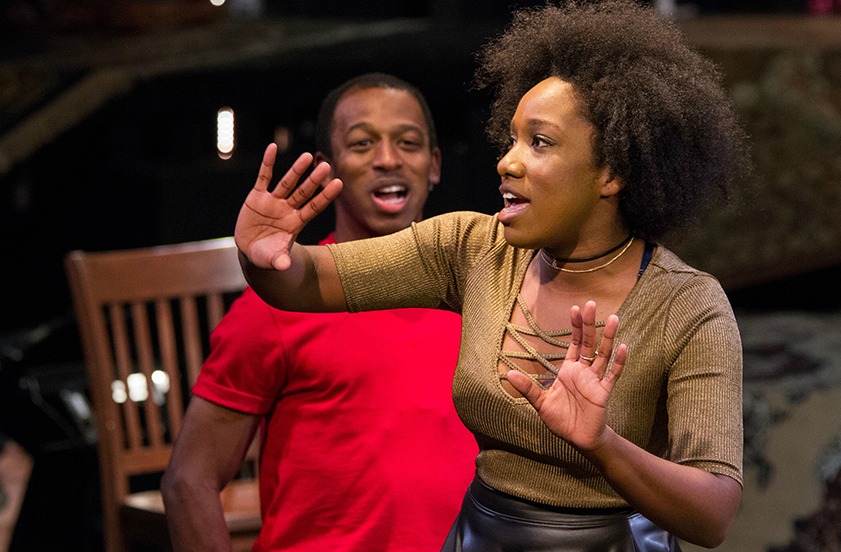 One thing the Youth does discover in church is that all the rock ‘n’ roll and rhythm-and-blues he loves had its start there. But he doesn’t know what to do with that love or with himself. He just wants out. So he breaks his mother’s heart and heads for Amsterdam, fabled city of dope, casual sex and racial acceptance, then on to Berlin, fabled city of hard-as-nails, protest artists.

It’s in Berlin that he’s forced to face the question that’s pursued him: Just Who the Heck Does He  Think He Is? What can his ‘art’ — if any — bring to this party? In a wickedly funny sequence, the Youth promptly claims the oppressed-gangsta-ghetto-self he never had but which he knows will impress the Germans. The hapless Youth may lack self-knowledge, but he does know this much: Just like going to church without faith, he’s still a fraud. It’s the three women in his life who repeatedly see him for what he is — and lovingly accept him or lovingly nudge him to get his act together. This holds true from his mother and his Amsterdam lover (the warm and gentle Ayanna Edwards) to his Berlin lover (Cherish Robinson — who’s made of sterner stuff).

As the Youth, Darren McElroy starts off too twitchy and frantic, chasing a comic effect he doesn’t need to grab at. When McElroy’s character angrily declares to his mother he’s leaving for Europe, one half-expects him to add that he’s suffering heroin withdrawal and that he really admires Richard Pryor. It’s when McElroy faces the more worldly Europeans that his wide-eyed, gullible boy-man becomes sweetly funny. Confronting him is Cam Kirkpatrick, who has no trouble at all playing the various black men the Youth measures himself against, including an over-the-top, transvestite performer who manages to mash-up Bertolt Brecht and Lady Bunny while still seeming both dangerous and wonderfully ridiculous.

Standing in for Stew, Calvin Scott Roberts may be playing the guitar more as a prop than anything, but I do wish the band’s real lead guitar were louder in the mix. Sometimes this show needs to shred and squeal. In short, it should sound more like the best of Roberts’ own performance — emotionally committed and convincing.