Remember Bizarro World in the old Superman comics? That was the world where everything was the reverse of Superman’s real world. The new comedy at the Dallas Theater Center called ‘Constellations’ multiplies that idea several times over. A young couple may or may not meet, she may leave him, he may propose marriage. Local All Things Considered host Justin Martin sat down with Art & Seek’s Jerome Weeks to talk about physics and the many possibilities of two people in love.

JWJustin, here’s a question you don’t often hear in a conversation about theater: What is the multiverse?

Oooh. The multiverse? It’s a theory in physics that’s very popular now. Supposedly, there’s an infinite number of universes. In quantum mechanics, for instance — that’s level of sub-atomic particles — events are considered only ‘probabilities,’ not actual, you know, real events. So that implies these other probabilities could also exist — in separate universes, universes where, I dunno, I’m a millionaire and pigs fly or fish walk.

Basically, ‘Constellations’ keeps hitting the re-set button on this video gzme. We see the same scene played out again and again – but differently each time. Here’s Alison Pistorius as Marianne and Alex Organ as Roland when they first meet: 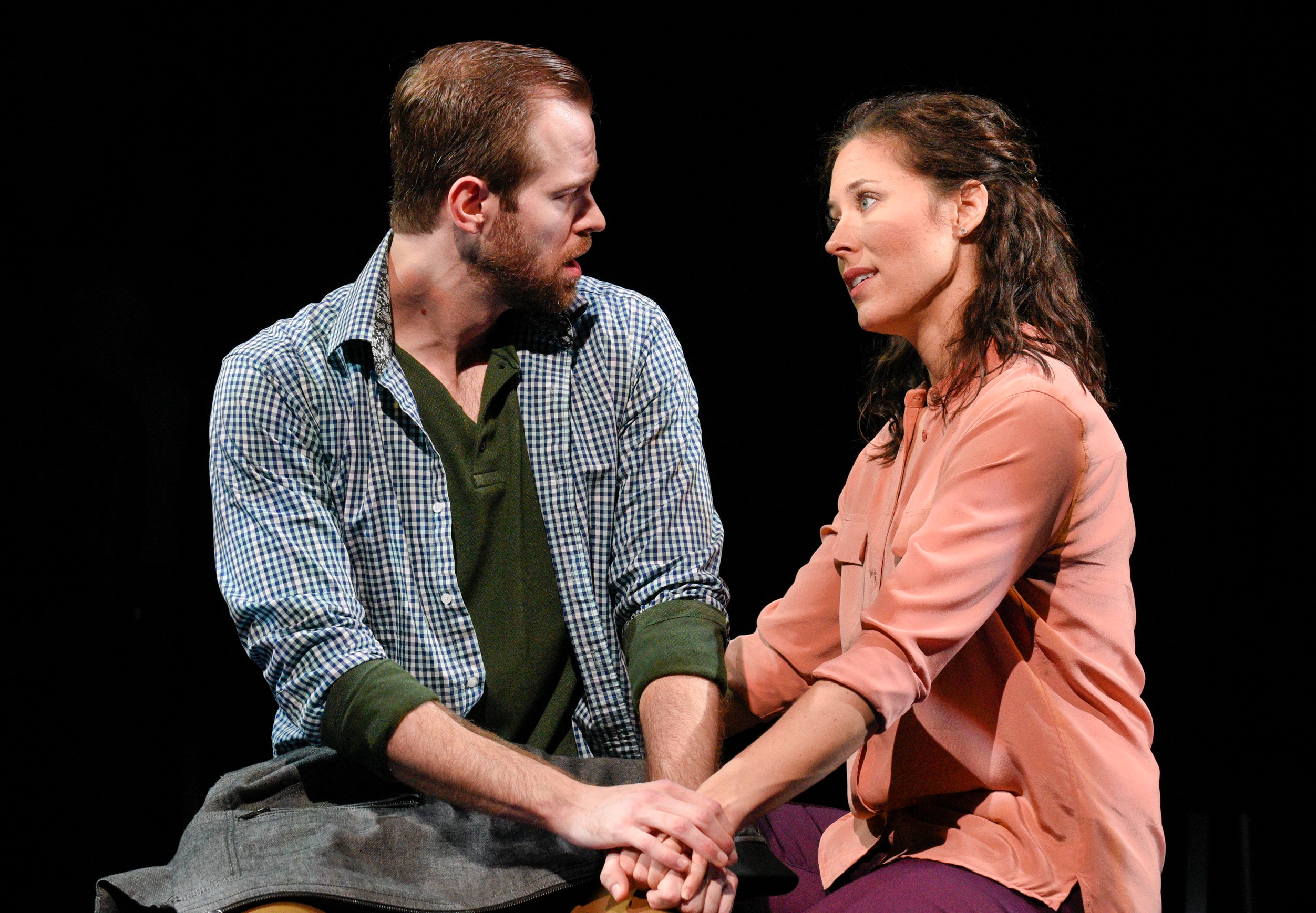 Marianne: Nothing worse than a soggy barbecue.

Roland: I’m all right. My wife’s actually just gone to get me a beer.

Marianne: Nothing worse than a soggy barbecue.

Roland: So are you a friend of Jane — or?

Marianne: No, yeah, we were at college together. Yourself?

Roland: My wife used to work with Jane.

Marianne: Nothing worse than a soggy barbecue

Roland: She’s the lady having the barbecue

Marianne: Oh, right. Christ, no. I was just walking past and I saw a load of free booze and sausages. … I’m joking.

That sounds like it could be very funny, like ‘Groundhog Day.’ You know, ‘You keep doing this until you get it right.’ Or it could be maddening — like a broken record.

JWYeah, but we do get forward progress with this story. What happens is the play will suddenly leap forward to another possibly pivotal moment. Does she fall ill? Does he cheat on her? Does she cheat on him?

In this whole multiple scenario-deal, it helps that, as a couple, these two are a bit mismatched, giving Nick Payne, the playwright, different possibilities to play with. Roland’s a beekeeper, a regular bloke, a bit tongue-tied, while Marianne’s a theoretical physicist who gets chatty when she’s nervous. Marianne’s job is how Payne brings in the whole multiverse theory — she tries to explain it to Roland. But people shouldn’t think, ‘Oh, that‘s a great evening in the theater — a lecture on quantum mechanics.’ ‘Constellations’ doesn’t shovel physics at us. Because we are watching, in effect, the multiverse in action — a demonstration model, as it were — the whole idea is fascinating in its stutter-stop rhythmic process, and Marianne’s own fascination with it makes it even lyrical.

Well, I certainly find it fascinating. Kudos to Payne for making it accessible. That’s tough  to do.

JWReviewers have certainly been fascinated by the multiverse and have waxed poetic about it. But this is hardly the first time it’s been used. As you said, it’s become a very popular idea in our culture right now — ‘The Atlantic’ even recently published a diatribe against the whole idea as injurious and pointless. Indeed, the same scientists who argue for the possibility of a multiverse also often point out that it simply can’t be proven.

So what’s the point? In literary-theatrical terms — unlike in life — it permits puzzle-building and puzzle-resolving. If we set aside sci-fi fantasy parallel worlds that often just involve time travel mucking things up, one of the first literary uses of alternative endings is probably John Fowles’ celebrated novel, ‘The French Lieutenant’s Woman‘ — which came out all the way back in 1969. And it was an early, post-modernist demonstration of authorial control, by abdicating control: You decide, Fowles wrote, which ending you prefer. And then, of course, there’s the recent musical ‘If/Then,‘ which explores the whole idea of ‘the road not taken’ by showing us how each choice would have ended up.

What distinguishes ‘Constellations’ from all these, though, is that it doesn’t show us a simple alternative or parallel world. It shows us multiple possibilities. Everyone else has been playing checkers. Payne plays chess with the idea.

But I think reviewers’ fascination with What The Multiverse Means About Life has led them to miss two fundamentally theatrical reasons ‘Constellations’ works, why it’s an intricate, elegant yet simple and moving two-hander.

First, ‘Constellations’ is an extremely tricky acting challenge. Repeating the same lines over and over again while changing your expressions each time? Remembering this is the time you say that line drunk but the next time you say it angry? Doing that is like going from zero to 60 emotionally and then slamming it in reverse. And then doing it again in a split-second. The chances you’ll screw up and find yourself circling back into a scene from ten minutes ago are tremendous. 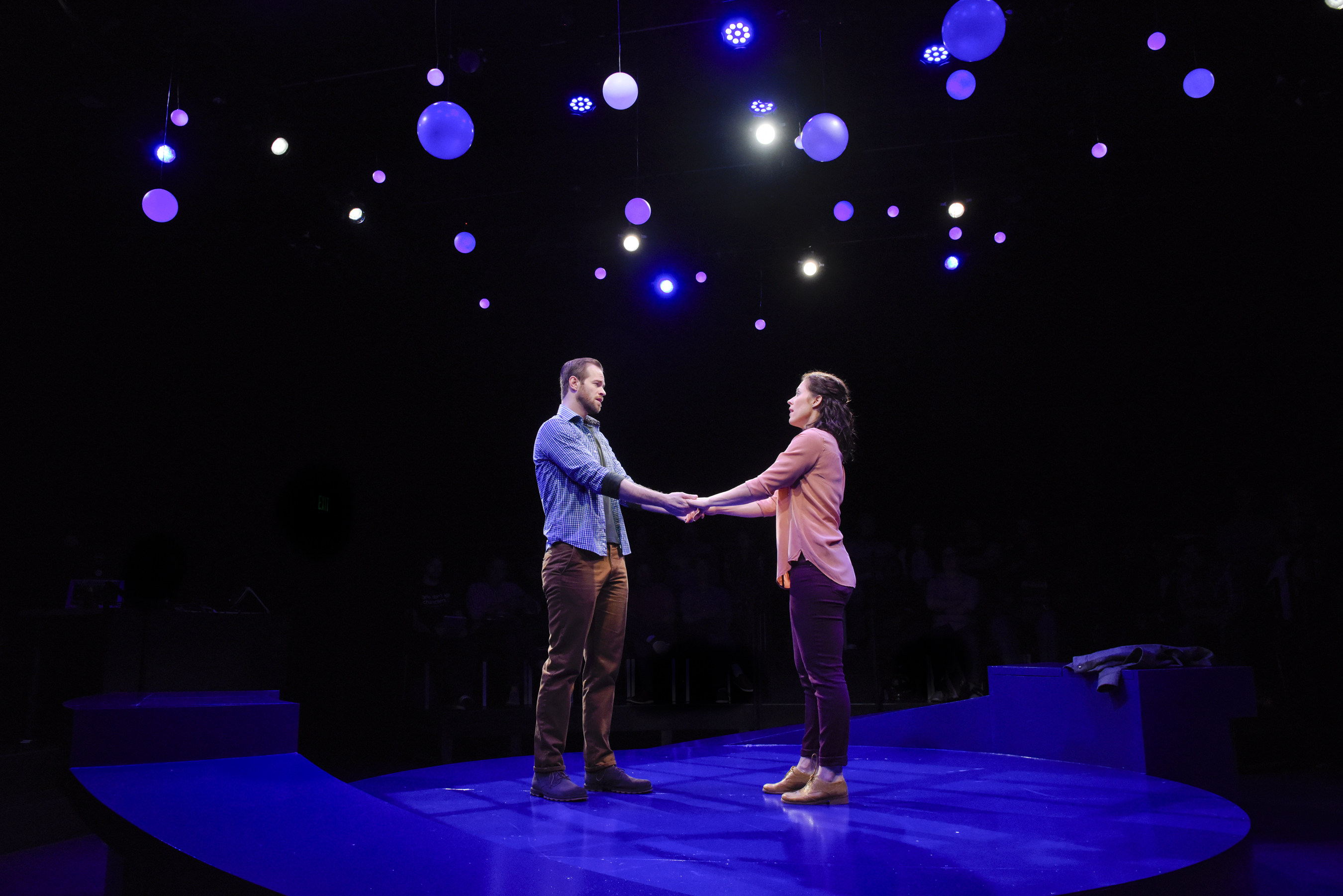 Alex Organ and Alison Pistorius are exceptionally fine at the emotional hairpin turns. We’ve seen Organ do this kind of intimacy and intensity before, although not at this rate of fire. But for Dallas theatergoers who haven’t seen Pistorius on Fort Worth stages, ‘Constellations’ is a real showcase for her. Organ and Pistorius – and director Wendy Dann – make this is a sweet, sharp little show at the Theater Center.

But my second point about how ‘Constellations’ works so well on stage is there are some 50 scenes here, so theoretically –

JWRight, but that’s not how it feels in the theater. What we see are 50 different aspects of Roland and Marianne. We explore their possibilities.

In astronomy, you know, constellations don’t exist. They’re not ‘real.’

Of course. We made them up. They’re just random, meaningless stars in the sky, and we saw these patterns that reminded us of gods and bears or whatever.

JWWell, what ‘Constellations’ does is draw all these emotional lines, these connections, between these two people. We come to know Roland and Marianne more intimately than many other stage characters simply because we’ve seen them in all these combinations, wretched and wrong-headed, passionate and funny. There’s this wealth of human detail here.

Which is why ‘Constellations’ is only 90 minutes long, but it feels richer than that.