Skip Navigation
Home > ArtandSeek.net > Review: The Play’s Called ‘Ruined’ But It Brings Out The Best From Echo Theatre

‘Ruined’ – Lynn Nottage’s Pulitzer Prize-winning drama from 2009 – may be Echo Theatre’s finest stage production. It’s certainly one of the most moving shows I’ve seen at the Bath House Cultural Center.

Echo is the small Dallas company dedicated to staging works solely by female playwrights, and by rights, ‘Ruined’ ought to be as good as it is because it’s also Echo’s biggest, most expensive show, a co-production that probably wouldn’t exist without partial financing from singer-actress Denise Lee.

For years, Lee has wanted to play the lead role, a cagey, unsentimental Congolese madame, a tough survivor in a world endlessly and pointlessly at war. Lee knows a fine showcase for her talents when she sees one. Mama Nadi is an African version of Bertolt Brecht’s ‘Mother Courage’ – but a Mother Courage who can handle a tune. She runs a brothel-bar-entertainment center in a backwoods mining area of the Democratic Republic of Congo. Mama serves live music, young women and watered-down whiskey to the alternating bands of rebel militias, government forces and thirsty miners who come in. Mama’s policy is utterly strict and pragmatic: She serves all sides equally and everyone pays cash — after unloading their weapons at the door.

She’s basically Humphrey Bogart in ‘Casablanca’: “I stick my neck out for no one.’ Mama’s fortunes rise and fall as she cagily serves whatever warlord controls the immediate vicinity and as she deals in whatever mineral Western companies currently want to rip out of the ground to make cellphones. 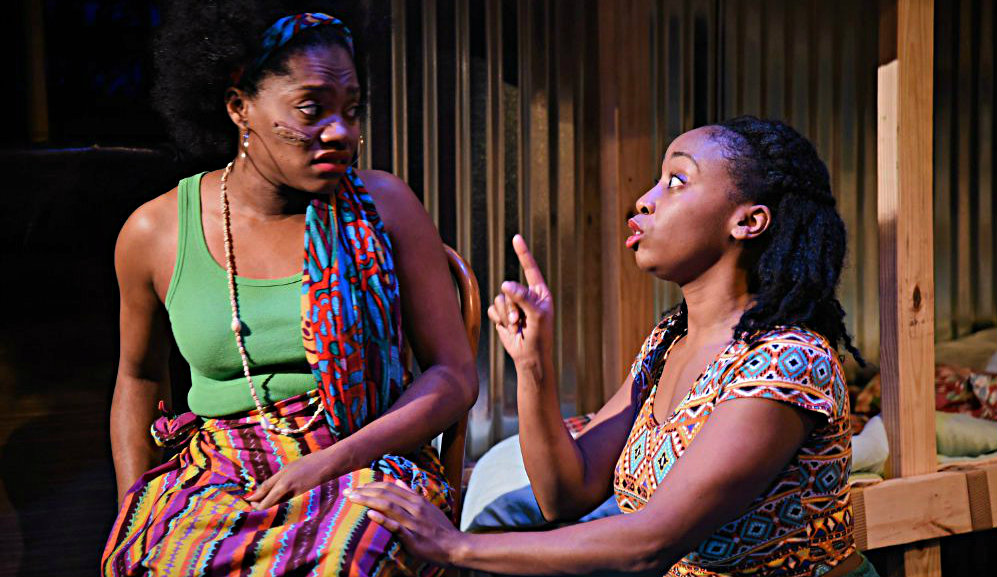 ‘Ruined’ opens with a visit from Christian (Tyrees Allen), Mama’s longtime supplier, a favorite traveling salesman.  In addition to his usual provisions of liquor and lipstick, Christian sells Mama two victims of the civil war, Salima (Kristen Bond) and Sophie (Whitney LaTrice Coulter). They are young villagers who have been gang-raped, which ensures their families will never take them back – if those families even still exist. This is rape as a weapon of war and tribal extermination. Sophie, in particular, has been ‘ruined,’ so badly torn, she’s no longer even good for sex.

Mama may exploit the young women in whatever way she finds profitable, but she also provides them food and, given the surrounding havoc, a modicum of safety. For her part, Sophie is smart and talented. She initially seemed a pitiful ‘freebie’ that Christian pushes on Mama because Sophie is his niece. But Sophie soon proves she can sing and she’s good with money.

Nottage created ‘Ruined’ from interviews with real Congolese women she met, and the shriveled world the play depicts is wretchedly familiar today – from the dystopian future in ‘Road Warrior’ to the latest news footage from Syria. As the steely-hearted Mama declares, if it can’t be weighed on a scale, it’s worthless to her. It’s a grasping place of little but violence and money, hunger and sex — momentarily relieved by outbursts of tantalizing music and dance. 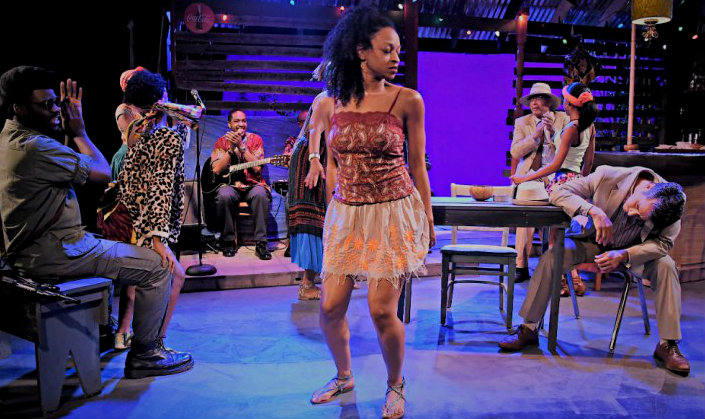 But dreams die hard. A French trader (Isaiah Cazares) entices one young woman (Kyndal Robertson) with the idea he’ll actually take her with him to the big city. Sophie plots to escape as well. Even Christian, in his lively yet timid way, seems to have hopes of charming and wooing Mama.

A steely-hearted cynic like myself can spot a sentimental ending coming, and ‘Ruined’ delivers on that score. But it’s an ending that feels earned. Lee and Allen, the old pros here, have rarely been so affecting. Both their characters find that their remaining sparks of humanity may be what save them or doom them, and the two actors deliver a battered emotional openness more rare, more precious than anything Mama has hidden for her own escape plans.

Pam Meyers-Morgan has directed ‘Ruined’ with a sure hand, and it must be said one of the show’s achievements (and pleasures) is seeing fourteen, local, African-American actors in an ensemble. And that number doesn’t even include the three musicians onstage. Beyond the lead pair, there’s Brandon White whose military commander is convincingly inhuman: He’s a despotic speech that will murder without a second thought. Eric Jenkins  as one of the interchangeable soldier-rebels stands out as both brooding and volatile, a brawl waiting to happen. Kyndal Robertson playing a chieftain’s abandoned daughter has a wounded arrogance that is so clearly a defensive front, it makes her seem even more deluded. 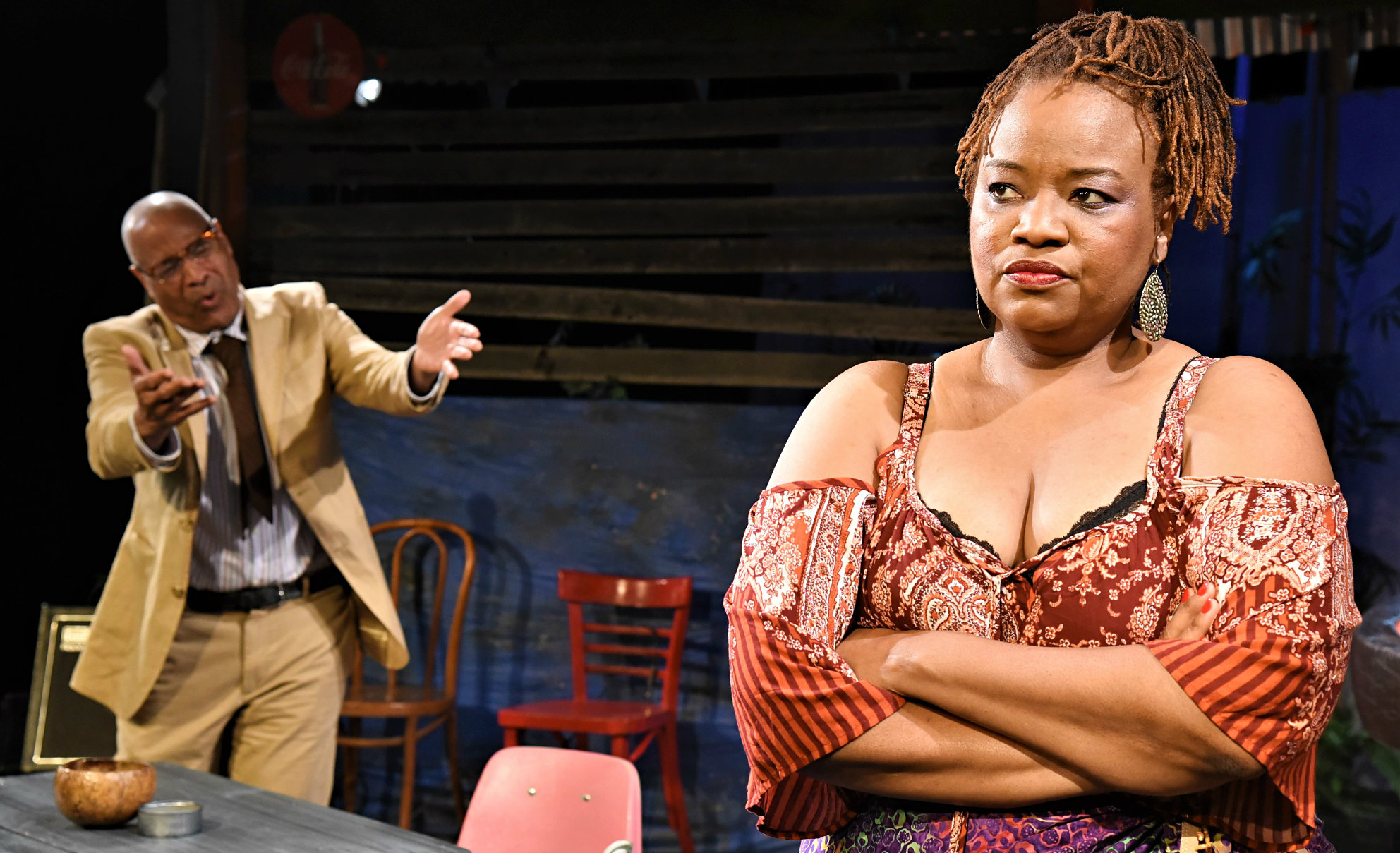 Outside of the black theater companies in North Texas like Jubilee and African-American Rep, there hasn’t been this many African-American actors on a single stage since the Dallas Theater Center’s ‘Staggerlee’ – and half that cast was imported from New York. That Echo could do this is more encouraging for the local theater community than learning another crop of rip-snorting, young stage companies has started up, promising to revolutionize everything in sight. It means some of these actors may actually be sticking around, and that means we might actually see previously unthinkable African-American plays getting staged hereabouts (Suzan-Lori Parks, Anna Deveare Smith, OyamO, Ron Milner). It also means that – like the Theater Center – North Texas’ mainstream companies can establish non-traditional casting as a policy — and not a rarity.

True, the youngest of this crew are clearly young Americans, too fresh-faced and dewey-eyed to be the kind of dead-faced killers and beaten-down victims one sees far too often in media coverage of the Third World. Which brings up one nagging objection to Morgan’s production as a whole: Everything looks too bright, too sharp. “Ruined” is set in a ramshackle bar full of frightened people in a war-torn rainforest. Yet no one wears sweat-stained, raggedy clothes or mud-caked boots (the costumes are by Bruce Coleman). Mama’s bar may seem to be held together by slats and corrugated tin, but nothing’s rusty, nothing is all that shabby or cracked or split or even just worn out (the set is by Clare Floyd DeVries).

I bring up this admittedly minor objection because these are talented designers working with a fine director, and together they’ve created, as noted, a terrific production. But this is pretty much the default design failing in most North Texas theaters and has been for as long as I’ve been sitting in their seats. For whatever reason, it seems we instinctively shy away from presenting poverty and desperation convincingly – and with a deliberate eye. It’s not much of a failing, and it’s true Nottage depicts people who savor Belgian chocolates and pretty fabrics because they’re so rare and who, as a matter of course, make an art out of harsh necessity. I’ll take a talented musical trio onstage (Neeki Bey, Christopher Green and the estimable S-Ankh S. Rasa on drums ) over some believably battered props, cracked-tile floors or properly distressed costumes.

But here, the whole look of the show  — like a mildly rickety Tiki lounge in a suburb somewhere — can suggest, at times, “festive exotica” more than “ruined.”