‘The Taming’ is the title of a political comedy at Circle Theatre that encompasses both today’s partisan gridlock and the Constitutional Convention of 1787. It does all this with three women playing all the roles, including a very sassy George Washington. Local All Things Considered host Justin Martin sat down with Art & Seek’s Jerome Weeks to find the humor in our history and politics.

Justin: So Jerome, knowing the title, ‘The Taming’ and knowing the play’s been described as a feminist comedy, I figured it’d be like a role reversal on Shakespeare’s ‘Taming of the Shrew.’

JWI thought so, too, but it’s not. The playwright, Laura Gunderson, has done this before. She riffs on titles or lines from Shakespeare as inspiration for her comedies.  So there is no swaggering Petrucchio getting his comeuppance here.
‘The Taming’ at Circle Theatre through September 17th.

Instead, ‘The Taming’ is a political satire, very timely, about our current political stalemate. It puts all our partisan rancor into three people in one hotel room. There’s a conservative political operative, there’s a liberal blogger-activist and there’s a cheerful Miss America contestant – Miss Georgia. She drugged the other two and has trapped them here. 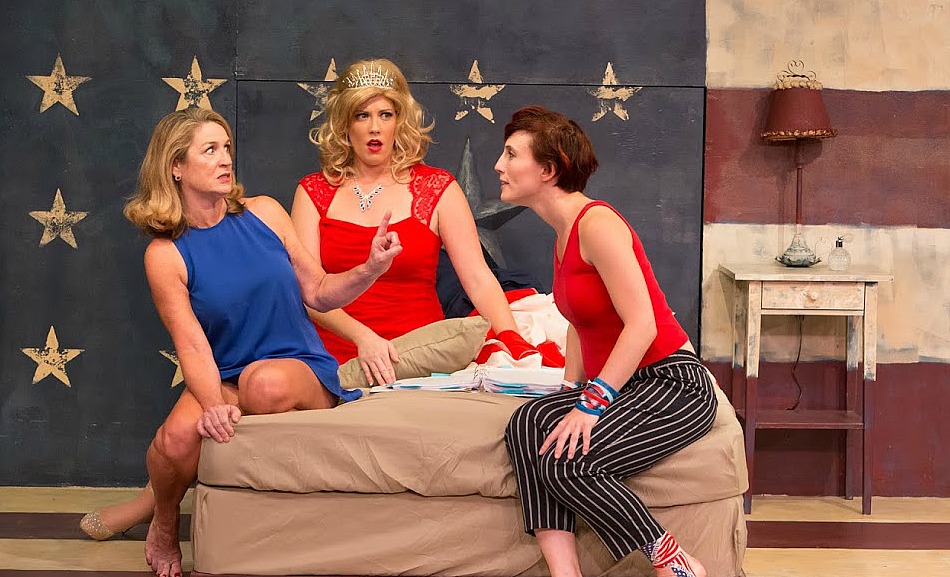 Ohhhhhh. Is that the one that says the states can vote to start a convention? If there’s a majority, they can write a new Constitution?

JWRight. Invoking Article 5 has gotten attention in recent years, mostly on the right and mostly as a way of getting a balanced budget amendment into a new, revised Constitution to curtail the federal government. Or at least the parts of it they don’t like.

Is that what Miss Georgia wants to do?

JWShe’s got bigger plans. She wants to hit the re-set button on the Constitution to break up our current gridlock. Reforming redistricting, abolishing the electoral college — that kind of thing, all in the hopes of restricting the increasingly hard-line extremism that has taken over (at least one of) the parties. And the liberal and conservative women are prime cases for why someone would be desperate enough to try this, even as unlikely an instigator as a beauty pageant contestant. The two politcos wake up in bed together from their drugged state — unsure of what might have happened — and promptly start yelling at each other. Lauren Ferrebee is the liberal Bianca (a nod to Shakespeare’s ‘Shrew’), and Lisa Fairchild is the conservative Patricia.

Bianca [Ferebee]: Oh, if I say it loud it enough, it must be true.

Patricia [Lisa Fairchild}: Ohhhhh, if I cry, it must be helpful.

Bianca: Oh, if I say ‘main street’ enough, people will think I care about the poor.

Patricia: Oh, if I drain the national defense and pour it into symphonies, no one will ever attack us again.

Bianca: Who are you?

Patricia: Who are you?

Patricia: That’s not a real thing.

Bianca: Neither is a gay Republican.

Oooh. Some of that’s sharp.

JWYeah. Certainly. But a little goes a long way here. These are entrenched character types we’ve heard a lot from, especially on cable news and social media. After awhile, I found their face-off a little tiresome – precisely because it was going nowhere. They were just digging their same old holes, despite the plot complications Gunderson adds. An episode of ‘Veep’ or John Oliver on HBO provides a more nuanced and entertaining take on what’s wrong with Washington.

But what are these two doing in the hotel room?

JWOh! Well, Miss Georgia hopes the conservative Patricia, with her political connections, and the liberal Bianca, with her media savvy, can help launch this new Constitutional convention. But the whole purpose of the new convention is to foster compromise, and Miss Georgia can’t even get these two to compromise. She ends up drugging them again, and the second act is a dream sequence. We go back to 1787, and Liz Millea, who played Miss Georgia, does just a terrific job as a very sure-of-himself George Washington. He keeps prodding James Madison to get this deadlocked convention straightened out.

George Washington [Liz Millea]: I’m presiding over your convention, like you asked me to, you’re welcome. And it is hot in Philadelphia and we are a smelly and loud-talking bunch, so we gotta wrap this up, OK?

JWNo, to my mind, the second act is much funnier. It’s silly and feels freer — because Gunderson doesn’t have to play that game of seeming to cut through today’s political biases while actually carefully keeping things safely balanced, as if each side were equally responsible for the mess. Which is how the first act feels. So while the play can be fun, ultimately, the weakness with ‘The Taming’ is that for political satire, it is a little tame.

For instance: It initially seemed odd to me that Gunderson includes a note in the program about ‘feminist humor’ — she knowingly mocks the old canard that feminists have no humor. (Molly Ivins, Ann Richards, hello?) It initially seemed odd because, in Bianca, Gunderson has created the very model of a rigid, unforgiving, humorless feminist. But then, that would seem to be the point: Gunderson is mocking what, presumably, are some of her own political beliefs by making them extreme and ridiculous: Bianca is willing to scuttle an entire employment bill because one provision in it will endanger the future of the ‘panda shrew’ (another nod to Shakespeare), an animal so obscure and small no one else has even heard of it let alone seen one.

On a certain plane, the satire is even admirable and honest. But Bianca is still a humorless feminist. Meaning she’s an annoying, mostly one-note caricature we endure. And like all good ‘Occupy Wall Street’-style liberals, it seems, she seems so idealistic as to be nearly useless in ordinary political maneuvering. So she resorts to (illegal) extremes.

The conservative Patricia, on the other hand — at least as portrayed by the capable Lisa Fairchild — may be willing to defend the indefensible (her senator-employer, who has a thing for young interns). But she’s actually quite smart, apparently effective in her job as a dim-bulb senator-wrangler and — if push came to kidnapping — would be a more congenial person to be trapped in a hotel room with. She’s the conservative-as-knowledgeable-insider and string-puller.

She is not, in other words, a tea party extremist, unwilling to compromise on anything, perfectly happy to lose an election or wreck a political party or the entire government just to uphold her ideals. It’s a stance that’s been called “political nihilism” even by fellow Republicans. In this light, it’s worth pointing out that it’s Bianca who threatens the most extreme method to achieve her political ends, not Patricia.

So the political satire in ‘The Taming’ seems another case of the ‘false equivalency’ — calling for a pox on both sides when both sides aren’t really equally destructive here. 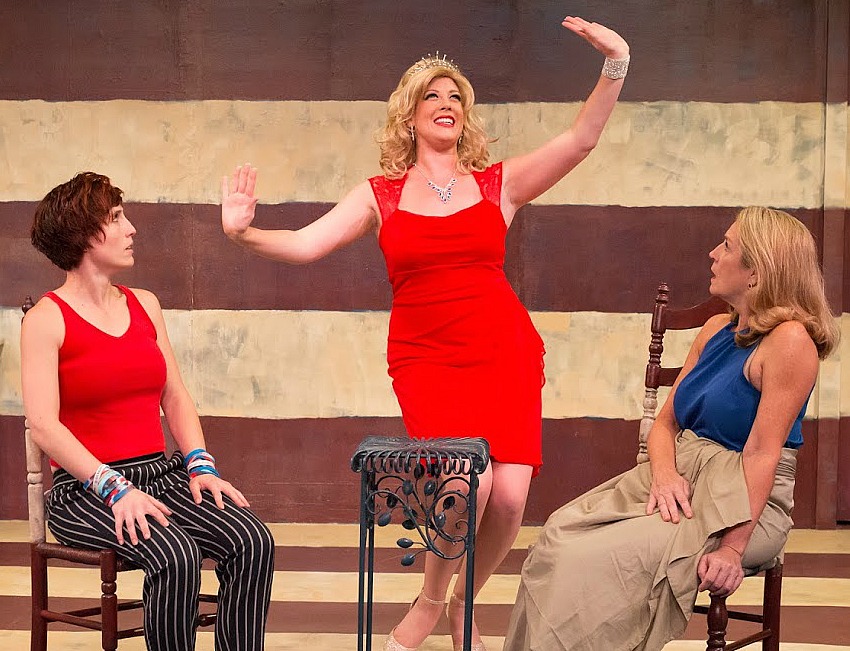 The pageant judges will love my talent portion: Ferebee, Millea and Fairchild in ‘The Taming.’

What also initially seemed odd about Gunderson’s note about feminist humor is that feminism really isn’t a major point of contention between the two politicos. Patricia defends herself, for instance, by saying she, too, had to break down the doors of the ‘old boys’ club’ to get where she is in the Republican Party. So don’t give her any whiny guff about glass ceilings.

But of course, while Patricia’s achievement may well be an example of feminism-at-work, Patricia herself will never see it that way: Her success did not depend on the earlier victories of the women’s movement but from her own determination, skill and hard work. She’s the classic ‘self-made woman’ who’s blind to how much of a boost she actually got. But there is no counter to her declaration of self-reliance in the play; it’s another case of while Bianca is shrill and driven to extremes, Patricia comes across as hard-headed and practical. Who you gonna admire? Who’d you want to run a government?

Yet ‘The Taming’ is still a feminist comedy simply because there are only women in it. Only women debate power and attempt to exercise (different types of) power here. Gunderson’s unstated-but-still-very-much-present argument is that, if women were in charge and were given a chance to re-write a founding document in which they had no initial input, they could get some serious things squared away. Mistakes would be corrected, intelligent compromise could happen again, government could be effective and beneficial and representative, etc.

Except Gunderson herself also recognizes the weakness behind the widely-held public belief that ‘if only our elected officials would compromise instead of sticking to their parties’ most extreme platform planks, America could function again.’ For one thing, she recognizes (but also seems to ignore) the fact that American government is, in its essence, divided. Internal conflict and maddening cross-purposes among the three branches of government are this country’s normal mode of being.

But the playwright’s bravest moment comes when ‘The Taming’ slams right into the ugliest compromise Americans ever made. The 1787 Constitutional Convention compromised and truly created the United States. In fact, they agreed on a divided system of government that’s  supposed to encourage compromise (and stifle popular flare-ups of the more extreme, dangerous and fleeting variety).

But in 1787, in order to keep the Southern states in the Union, we also compromised and agreed to let slavery continue. We sold out the African-Americans (and not for the last time).

Gunderson has the historical wisdom to recognize this. She has James Madison (in the dream form of Patricia) agonize over slavery — and then broker the deal. So our current Holy Grail of compromise can turn out to be evil. And while her female characters at the end may agree on a roster of seemingly non-controversial proposals (reforming redistricting, abolishing the electoral college, balancing the budget), they don’t address, oh, say, reparations for slavery. Or government-funded abortions as part of a universal healthcare program. Good luck getting Americans to agree on those.

Yes, ‘The Taming’ is a comedy and it only has two acts. It’s not about solving everything wrong with America. But while I admire the play’s intelligence and occasional slashes of wit, its cockamamie premise (kidnapping people to jump-start a new Constitutional Convention) gives it the freedom to do something like flashback to 1787 and re-arrange history a bit, but not enough to think clearly (and perhaps scathingly) about our future.

One more note. Rose Pearson, who co-founded Circle Theater 35 years ago, died of cancer the day before ‘The Taming’ opened. ‘The Taming’ reflects Pearson’s best impulses in starting Circle and keeping it going. It’s a new play, it’s a thought-provoking play and, thanks to director Robin Armstrong, it’s been given a smart production. Here’s hoping this legacy, Pearson’s legacy, continues at Circle.