I may not know a lot about opera, but I do know about bad hair days, and Samson, having encountered Dalila in the Saint-Saens opera Samson & Dalila, has a very bad hair day, which leads to his demise, but also to his salvation.

By presenting Samson & Dalila, the Dallas Opera is offering lessons in manliness for “everyman” at the Winspear Opera House, beginning October 20th. To prepare for the seduction, the revenge, the taunting, torture and temple tumbling- not to mention the bad haircut, the Opera Guild presented an Opera Insights free panel discussion with the Opera’s stars Clinton Forbis (Samson), Richard Paul Fink (High Priest of Dagon) and Ryan Kuster ( Old Hebrew), moderated by Suzanne Calvin of the Dallas Opera.

Although English supertitles will translate the French opera, the panel advised the audience to come having reviewed the libretto , the biblical story and to have listened to older recordings. That, along with engaged listening and a focus on the staging and the singers’ gestures and bearing, will probably serve us better than focusing on the titles. The story will reveal itself through the song, the staging and styling. 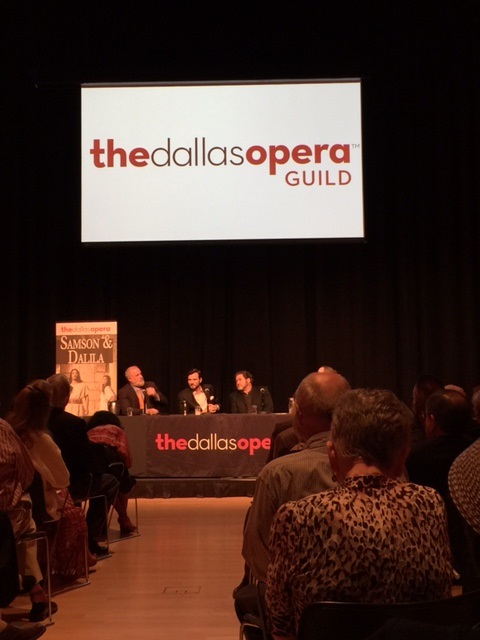 But… the staging in all opera, says Clinton Forbis, must be in sympathy with the scene. “The physicality of staging cannot affect the vocal goal, and gymnastic staging ( singing from a trapeze) are attempts to wow and draw a crowd, rather than engage the audience as it should, in listening.”

Thus, having been coached in opera listening skills by the expert panel, I will be in the audience as a novice opera goer who will:

*Expect to thrill to the physical impact the chorus will have on my ear, because Richard Paul Fink explains, “The choral singing takes over your whole being.” Ryan Kuster agrees, ” “As a singer, it is creating something bigger than yourself.A star role is more about self and ego.”

*Expect to be moved by the duets, touted by Richard Paul Fink, the Grist Mill scene ,a favorite of Clifton Forbis and the Prayer Scene, Ryan Kuster’s pick as memorable.

*Expect and enjoy the mistakes of  the live performance. Richard Paul Fink explains that the mistakes are evidence of  engaged, fearless singers who are not ” playing it safe” and not “monitoring their  performance, but living it.”

*Expect to be informed of the story by the singers’ body language and facial expressions , while also noting how  their body actions and postures protect their  breath and vocal ability

*Expect to see more character development in Samson & Dalila because  singers like Clifton Forbis, Richard Paul Fink and Ryan Kuster want to project “more than a pretty voice” and have delved further into motives and meanings to enhance the music.

And… following the performance, I will ponder the panel’s final comment in the form of a question, “What is life without the Arts?”